From Wrightspeed, the jet-powered delivery truck

As a co-founder of Tesla Motors and creator of the X1, a street-legal electric car capable of reaching 60mph from a standstill in 2.9 seconds, Ian Wright has a demonstrable need for speed – which makes his latest venture a bit of a head-scratcher.

Or not. Wright is channelling his energies into Wrightspeed, a developer of electric powertrains for trucks, based in the Silicon Valley city of San Jose, California. Though Teslas and the Ariel Atom-based X1 may seem light years removed from commercial trucks, an electrical current runs through them all. And with his medium-duty truck powertrains, Wright claims he is better positioned to accomplish something he never could with Tesla: the reduction of vast amounts of fossil-fuel use.

Wright’s weapon of mass deconstruction? A plug-in electric powertrain that turns gas-guzzling vehicles – lumbering garbage trucks, big delivery rigs and the like – into fuel-sippers. The vehicles also run cleaner, as measured in emissions per kilowatt hour, than conventional electric cars that rely on electricity produced by traditional public power stations.

“It was quite a change,” Wright says of his move from high-performance boutique electric cars with price tags north of $70,000 to slow-footed trucks. “But I was driven to figure out a way to get this technology to market and build a scalable business model. The market for high-performance cars is too small to get investors excited. It’s a good hobby business.”

The challenge, as Wright saw it, was determining a market large enough for the kind of impact he wanted to have. “The answer was trucks,” he says. “Trucks run much dirtier than cars. And they burn a lot of fuel.”

Wright says that on average, one truck for Wrightspeed client FedEx consumes about 4,000 gallons of fuel annually. (According to FedEx figures, the company operates a fleet of about 47,500 motorised vehicles.) And that is just one company; Wright notes the presence of roughly 2.2m medium-duty trucks in the US alone (defined as vehicles with gross vehicle weights of 10,001-26,000lbs).

The parcel company recently retrofitted and road-tested two trucks with the Wrightspeed system, and subsequently ordered retrofit packages for 25 more.

In another example, an Isuzu NPR, a medium-duty truck that achieves roughly 12mpg with a diesel engine, returned 44mpg after a retrofit by Wrightspeed.

Garbage trucks represent another opportunity. An average truck burns about 14,000 gallons of fuel per year in the US, at a cost of about $55,000 to the operator. Wright says a Wrightspeed powertrain could double a garbage truck’s fuel economy from fewer than 3mpg to 6mpg. “We can generate $35,000-a-year savings per vehicle through reduced fuel costs,” Wright says. 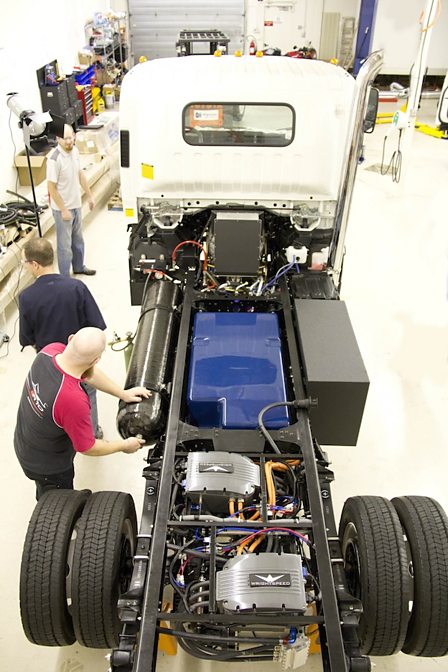 The secret sauce in Wrightspeed’s medium-duty electric powertrain – called the Route – is a tiny gas turbine. This microturbine, which functions not unlike those found in jet engines, spins a generator that then feeds the batteries. Kinetic energy captured under braking also is fed into the batteries. The microturbine can run on diesel, biofuel or compressed natural gas. Meanwhile stout electric motors mounted to four drive wheels provide the motivation. The Route system employs geared-traction drive, comprising a two-speed gearbox with clutchless shifting that delivers 125 to 250 continuous horsepower and 18,000 pound-feet of total axle torque. Top speed for a medium-duty rig running the Route? A peppy 75mph.

“The wheels are driven only by electric power. There’s no piston engine at all,” Wright explains. “The gas turbine drives the on-board generator, which makes it an unlimited-range electric vehicle. You don’t have to stop and recharge it like a conventional electric vehicle. That’s part of the magic.”

Turbines typically run cleaner than piston-driven engines because of the continuous combustion process, Wright adds. “And drivers love the powertrain because it’s so quiet. They don’t hear diesel-engine noise all day.”

Brake wear is another huge concern for fleet operators, because of the constant start-and-stop nature of their work. But with the Route system’s regenerative braking, merely lifting a foot off the accelerator slows the vehicle by reversing the electric power flow, effectively applying braking torque to the wheels.

Wright declined to specify the cost of a Route retrofit, but argued there were cost savings relative to typical powertrain replacements, which occur cyclically with many delivery trucks – sometimes two or three times during their life cycle, he notes.

Looking ahead, Wright says he has no interest manufacturing electric cars for consumers. As the Wrightspeed website puts it, “We like to make things go.”

Not as fast as an X1, mind, but certainly optimised for the long haul.