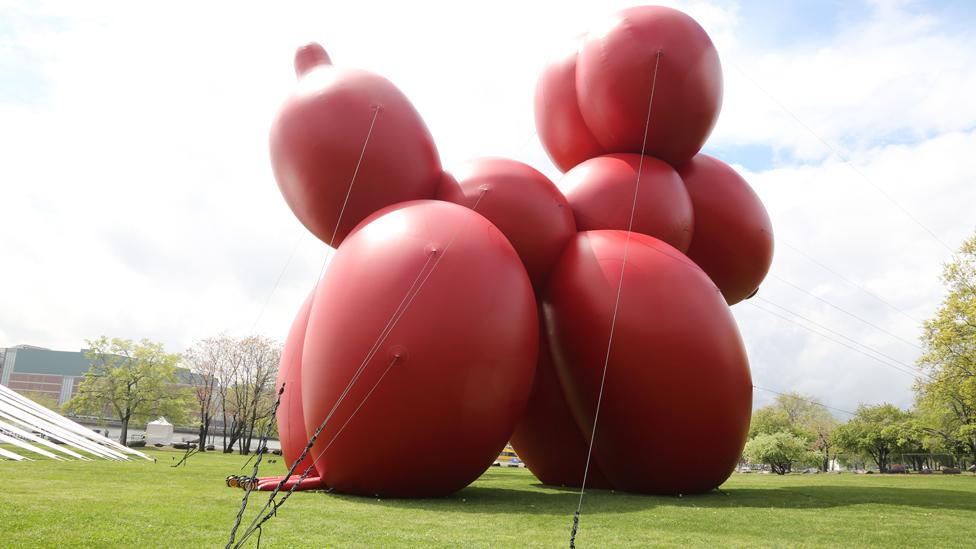 By Georgina Adam 13th May 2013
When New York’s Frieze festival opened in 2012, some decried a ‘British invasion’. Georgina Adam finds this year’s fair a bold hit that has shaken up the art market.
I

It’s scarlet, gigantic and worth almost $1m. Balloon Dog, an inflatable “puppy” standing 80 feet tall, was installed on New York’s Randall’s Island at the entrance to the Frieze art fair at the beginning of this month. The work of the provocative Californian artist Paul McCarthy, the sculpture was just one of many startling works put on show during the event, which specialises in cutting-edge contemporary art.

The decision to launch a New York version of London’s Frieze art fair last year was greeted with outrage in some quarters. “A British invasion!” screeched some observers, while others sneered that the choice of location – an island in the East River to the north of Manhattan, which few New Yorkers had ever set foot on – would be a disaster.

How wrong they were. From the start, the long white tent built for the fair, with its bright natural lighting, proved an excellent showcase for the art. New Yorkers took to the ferry service like – well, like ducks to water and the catering was excellent – always important in a fair, particularly if it is in an out-of-the-way location. But faced with an untried new event, there was some caution on the part of the dealers, and many played it safe by bringing uncontroversial art – such as big abstract paintings, often the easiest pieces to sell at a fair.

This year, exhibitors were much bolder in their choices. One smash hit was Ann Lee, a 2011 work by the Turner Prize-nominated performance artist Tino Sehgal. Visitors queued patiently to enter a plain white booth to talk with a child actor. Speaking like a robot with a faintly metallic voice, making slightly jerky gestures, the child explained that she had escaped from a video game and had become three-dimensional. I asked if I could photograph her, but she replied: “Tino doesn’t want that.” Sehgal is famed for refusing any recording of his work and sale contracts have to be memorised. They do sell though, and while the gallery, the famed Marian Goodman, did not give prices, these are thought to be about $100,000, which buys ownership of the performance.

Another booth was dominated by sculptures of food by the American artist Tom Friedman. A giant plaster pizza hanging on the wall could have been yours for $270,000, except that a collector snapped it up on the first day. Leaning against Perrotin’s stand was a realistically sculpted woman, her head hidden in a scarf, by the French artist Daniel Firman. Linda, 2012, sold immediately for $32,500. Valeska Soares’ Finale, 2013, a mirrored table loaded with coloured crystal glasses, was bagged by the Miami-based Cisneros Foundation for $120,000 from the Fortes Vilaça gallery. Overall, dealers were delighted with the brisk business at the fair.

Freezing out the competition

But Frieze New York’s very success is threatening to redraw the city’s entire art fair landscape. Until Frieze arrived the leading fair was the long-running Armory Show, held in March on two unwelcoming piers on the Hudson River. Other smaller fairs clustered around it - but with the emergence of Frieze, many have now moved their dates to May. The Armory Show itself is in flux, as it is up for sale. Frieze, deliberately or not – and its owners deny that they were specifically gunning for the March event - has “parked its tanks on the Armory lawn” as one dealer put it.

Further boosting the fair this year were its dates (9-13 May), which fell right between two key weeks in the New York auction calendar, when the major impressionist, modern and contemporary art sales were held at Sotheby’s, Christie’s and Phillips. This meant that top collectors were in town, among them London’s Anita Zabludowicz, the Californian couple Norah and Norman Stone and the Italian designer Valentino.

So the weekend was well chosen for a Sunday barbecue given by billionaire publisher and collector Peter Brant in his vast Greenwich, Connecticut property. The occasion was the inauguration of a show of Andy Warhol pieces. Brant is a major buyer and trader of Warhol’s work, and has put many of his most significant holdings into a foundation in his name, housed in a beautifully restored barn on the property. Amusingly, hanging over the fireplace in the entrance to the building is a sculpture by the art world’s agent provocateur Maurizio Cattelan. It depicts Stephanie Seymour, Brant’s wife and former Victoria’s Secret model, naked to the waist and with flowing hair, like a ship’s figurehead. Or like a trophy....

With 16 lambs – specially imported from Argentina – roasting on spits, the party attracted just about the whole art world, from collectors such as the Rubells of Miami to the major dealer Larry Gagosian. As they looked over the immaculate and extensive lawns the guests swapped the latest gossip, hotly denied by the organisers of course, that Frieze might also be planning to import its Masters fair, for ancient, classic and modern art made prior to 2000. Perhaps the British invasion is not over yet. As for Balloon Dog, by fair end it was still looking for a new owner... 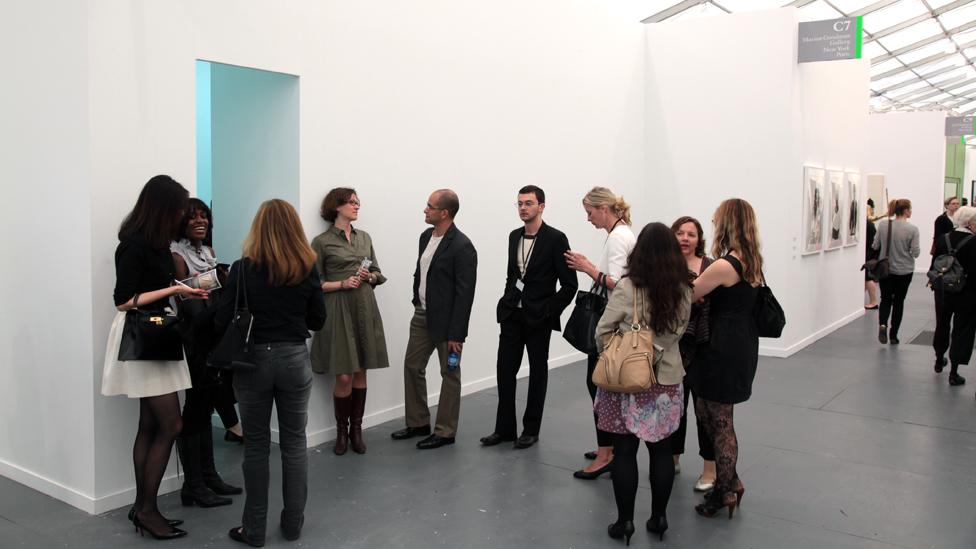 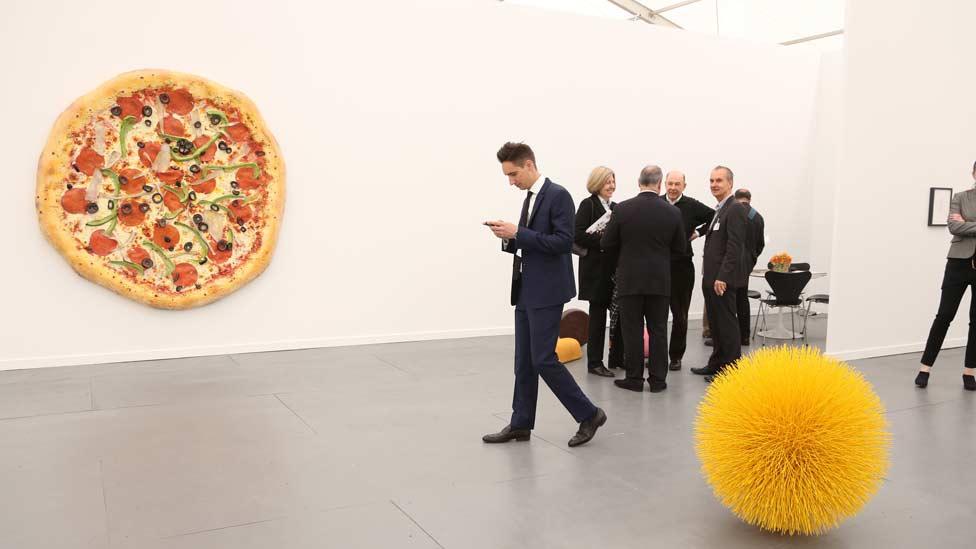 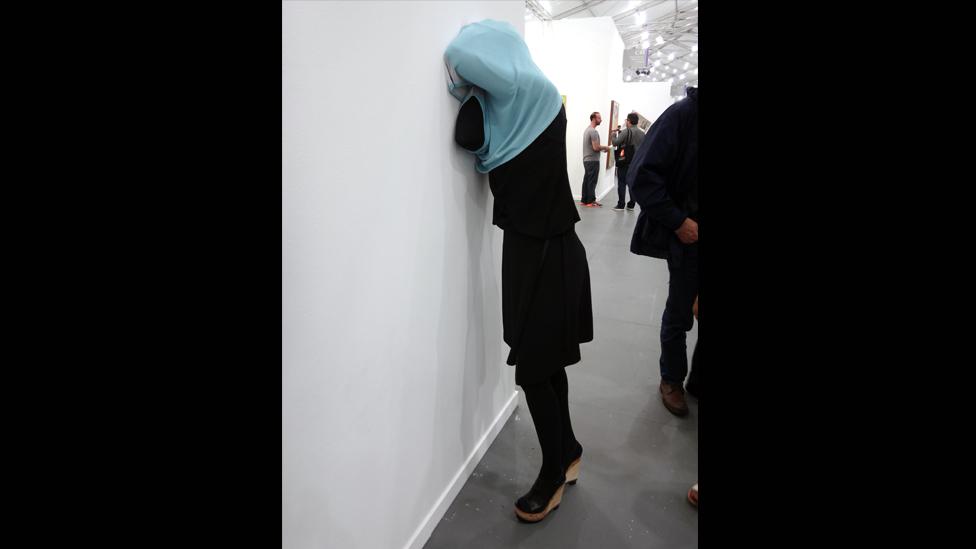 Leaning against Perrotin’s stand is the remarkably realistic Linda, 2012, by the French artist Daniel Firman. She sold for $32,500.

Leaning against Perrotin’s stand is the remarkably realistic Linda, 2012, by the French artist Daniel Firman. She sold for $32,500. 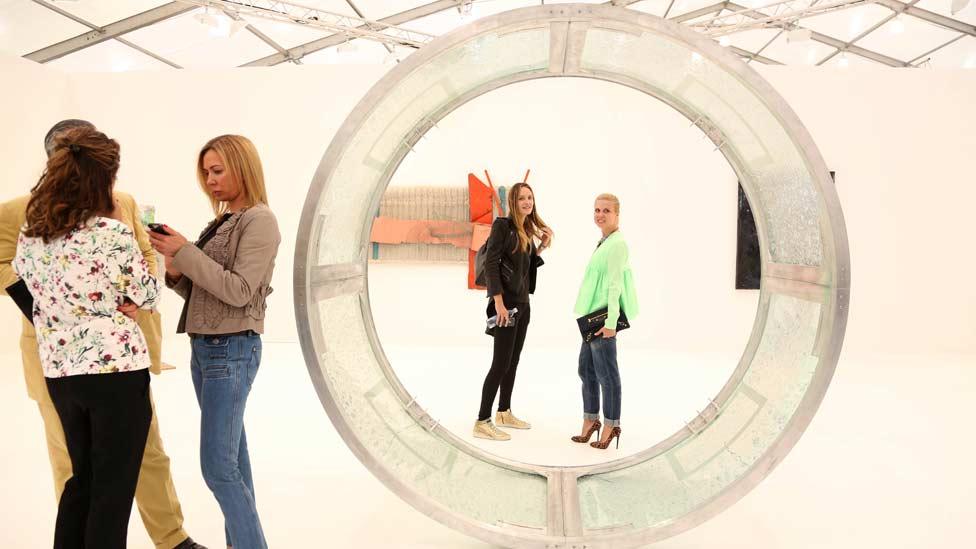 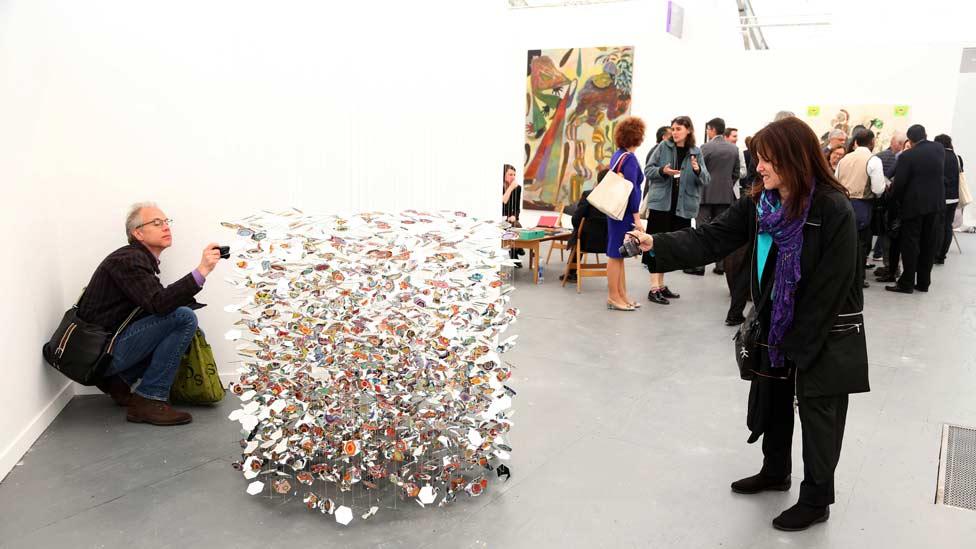 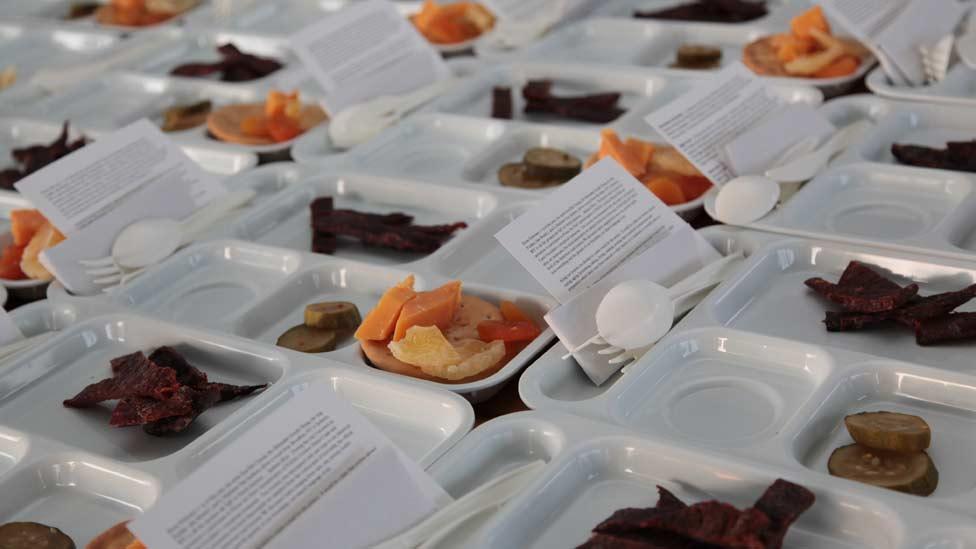 Several New York restaurants have popped up at Frieze to feed hungry art lovers. The project FOOD 1971/2013 is described as “a total work of art”. (John Berens/ Frieze)

Several New York restaurants have popped up at Frieze to feed hungry art lovers. The project FOOD 1971/2013 is described as “a total work of art”. (John Berens/ Frieze) 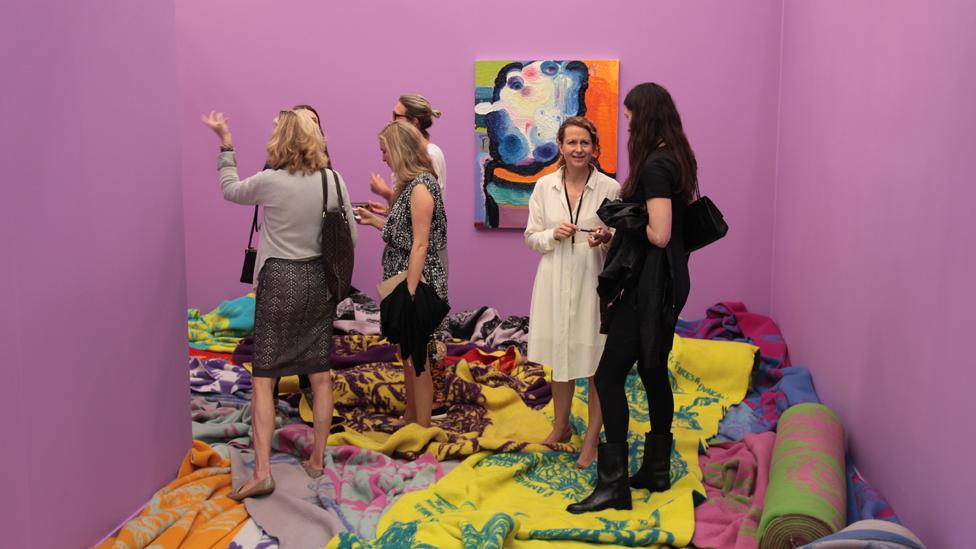 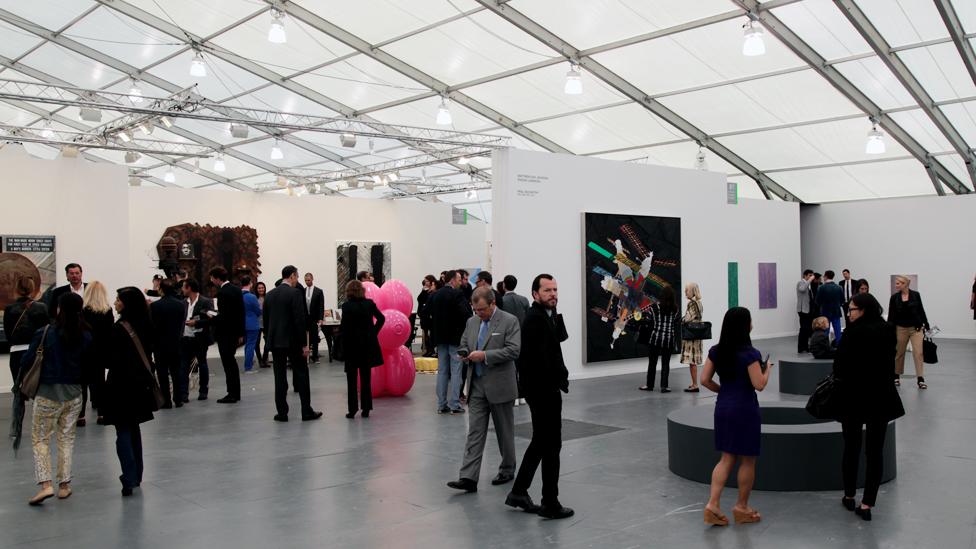 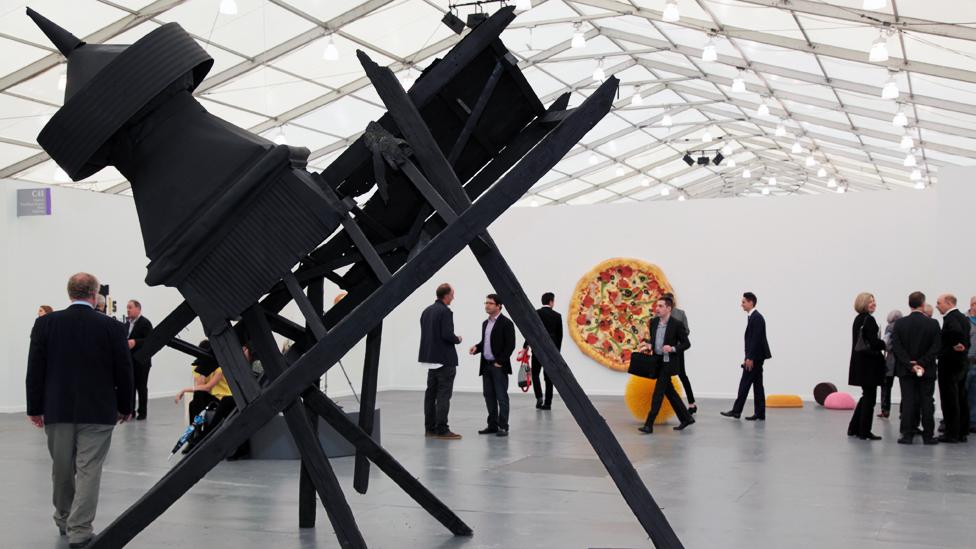 New York Artist Marianne Vitali, known for her large-scale wooden sculptures, was commissioned to create the work Cockpit (in foreground) for the fair. (John Berens/ Frieze)

New York Artist Marianne Vitali, known for her large-scale wooden sculptures, was commissioned to create the work Cockpit (in foreground) for the fair. (John Berens/ Frieze)