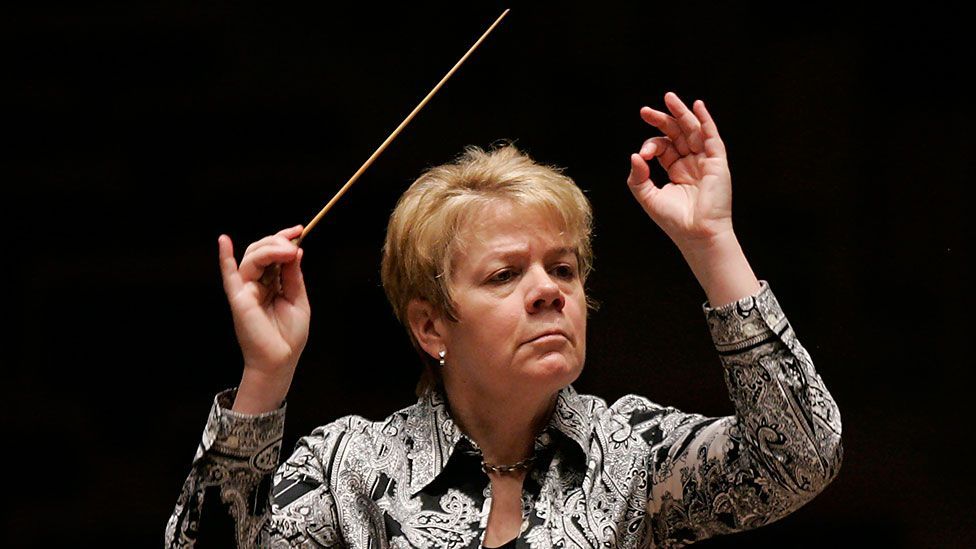 By Clemency Burton-Hill 21st October 2014
Plenty of girls learn instruments – but hardly any women make it to top positions in classical music. Why? Clemency Burton-Hill discusses gender inequality with conductor Marin Alsop, who will shortly become the first female in 118 years to lead the Last Night of the Proms.

“It’s tiresome that we’re still talking about it in terms of gender,” admits conductor Marin Alsop, “but in many ways this is a great moment to turn the spotlight onto the issue of women in leadership roles in society. Because I do think this is a leadership issue.” The 56-year-old New York native, who six years ago became the first-ever woman to take the helm at a major orchestra (the Baltimore Symphony), is about to become the first female to conduct the Last Night of the Proms, the biggest night in Britain’s classical music year.

“Of course I feel enormously honoured, proud and incredibly excited to preside over this great event and to be the hostess at the ultimate party,” she says. “I’m thrilled. But we can’t be complacent about ticking that one box. I want to ensure that there’s a second, and a third, a tenth, a 20th, a 100th.”

If classical music’s glass ceiling has been scratched by Alsop’s presence on that storied podium, it has by no means been smashed. For Alsop, the issue goes beyond classical music and should be viewed in the context of wider gender inequality in society. Recent books by Sheryl Sandberg and Emily Matchar and a now-legendary article by Anne-Marie Slaughter have rammed home the uncomfortable truth. The simple fact that so many women – and some enlightened men – have been forced to swallow in recent years is: that despite the progress being made in so many areas of public life, gender equality is a long way from being attained.

Has Alsop encountered explicit prejudice in her industry, I wonder? Misogyny? Sexism? “It’s taboo to talk about this stuff, so the Last Night is a good opportunity to raise it… But it’s a bit of a catch 22,” she suggests. “I don’t know that I could call it overt prejudice, but I interpret it as a societal lack of comfort. It’s not what people are used to, and therefore we don’t gravitate towards it. Listen, I have to admit, when I see women fly planes, even I hesitate because it’s not what I’m used to!” She adds: “We are inordinately proud of the equality we think we’ve achieved. And then you look around the world and realise that women really don’t have the kind of equality we might reasonably hope for in this day and age.”

When Alsop began her career, after studying at Yale University and New York’s Juilliard School, opportunities for female conductors were even scarcer than they are today. “I was rejected from many things partly because I was a woman,” she explains. “The only option I had was to start my own orchestra.” A protégé of the late Leonard Bernstein, with a combination of great tenacity and talent she pioneered a path that no female had ever managed before her. And, despite some ugly battles – like the protests from a large swathe of the Baltimore Symphony when she was first named Music Director – she has seen the plaudits roll in. Alsop has also turned the financial fortunes of that orchestra around, silenced the artistic critics, launched OrchKids, a visionary and ambitious social education project through music, and has added Principal Conductor of the São Paolo State Symphony Orchestra to her impressive international resumé.

But the depressing truth is that, despite a handful of other baton-wielding sisters doggedly determined to catch up with their male counterparts – Emmanuel Haïm, JoAnn Faletta, Natalia Luis-Bassa, Julia Jones, Jane Glover, Gisele Ben-Dor, Sian Edwards – Alsop essentially remains the only female conductor to be making such an impact.

When I ask her if, as that passionate and determined twenty-something forming her own ensemble after Juilliard, she ever imagined she’d still be in such a position all these decades later, she sighs. “I assumed it would change, but 20, 30 years on I look around and it’s sort of the same number: just a handful of us. It does surprise me that we’re in 2013 and there are still firsts for women,” she says. “And I think it becomes the responsibility of people like me, who have these opportunities, to try to get more women seen in these roles so it becomes not just about Marin Alsop.’

To this end she has launched a highly successful fellowship for young female conductors. “A huge part of becoming successful is having the ability to make mistakes and learn from them, so we have to create an environment where it’s okay for women to make mistakes,” she insists. “I feel strongly that one of the only ways to do that is to create a culture of mentorship, so we help the people coming up that we believe in and give them opportunities. To be a conductor is tough: you’re under such an enormous magnifying glass, regardless of your gender. It’s just an incredibly challenging job. And one of the main challenges is that none of us is perfect, male or female! We all have strengths and weaknesses, but when so few women are able to get to the top the pressure on those women to be perfect is even greater.”

Lonely at the top

“Think about it: how many truly great leaders, regardless of gender, do you come across in your lifetime?” Alsop asks. “Probably only a handful, right? And if only 10% of the people leading in any sphere are going to be female, what is that, one great female leader you’re going to encounter? And what if that one female messes up? The pressures are extraordinary!” She gives a weary chuckle. “And of course, if you’re a woman, you not only to be perfect but to look perfect too. So you have to have it all, to do it all, to be perfect and look gorgeous while you do it. Those are things that require superhuman strengths.”

It strikes me that the unequal representation at the top of classical music by women is even more grievous, given how many girls take part in music further down the food chain. We are just starting to see more female leaders at the front of the orchestra (the principal violinist is usually called ‘concert-master’ – go figure). And the introduction of ‘blind’ auditions, where a prospective instrumentalist performs behind a screen so that the judging panel can exercise no gender or racial prejudice, has seen the gender balance of traditionally male-dominated symphony orchestras gradually shift.

As in other areas of public life, the contentious issue of quotas occasionally raises its head in classical music, and I wonder where Alsop stands on this? “Well, quotas are a dangerous topic, especially in America, but I do think the leadership and management of any orchestra should take a broad view,” she suggests. “You never want to say to people: ‘you must do something because of a quota’. But you want to say to them: ‘if you look with an open mind you will find female conductors, composers, instrumentalists who are superb and really deserve to be up there.’”

Speaking of female composers, I notice that, as a curtain-raiser at the Last Night of the Proms, Alsop has programmed Masquerade, a new BBC commission by Anna Clyne. “I was really keen to have a woman composer at the Last Night,” she admits, “but Anna Clyne is supremely talented and she’s written a beautiful opener. So it was a deliberate tactic in one way, but that said, it was a no-brainer.”

Maybe one day we won’t even think of a composer named Anna Clyne as a ‘female composer’, or a conductor named Marin Alsop as a ‘female conductor’, I venture. Alsop laughs. “I do dream of that day. And maybe it will come. We’ll see. I won’t hold my breath.”