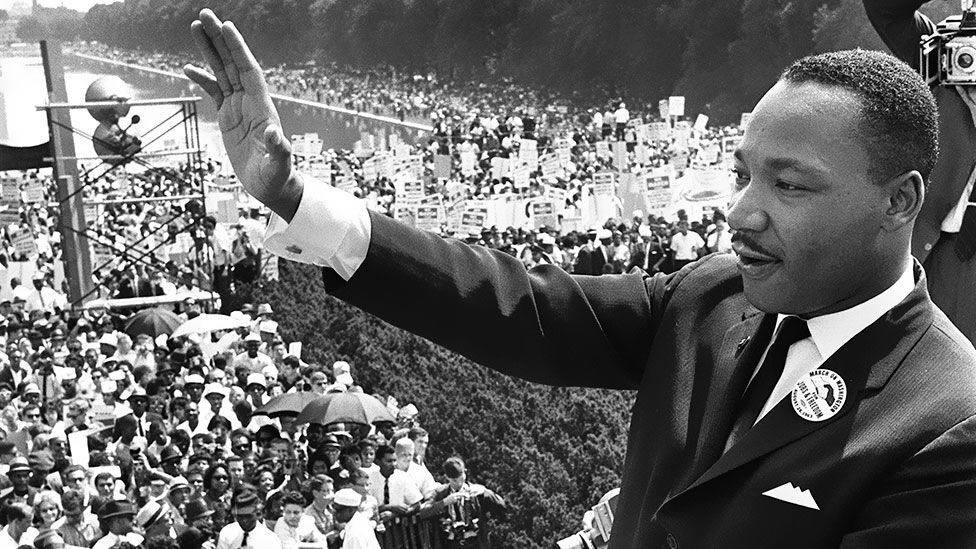 Mahalia Jackson took America to church 50 years ago. Minutes before her friend Martin Luther King Jr. announced “I have a dream” to cap the March on Washington DC on 28 August 1963, Sister Mahalia reminded the 250,000 citizens spread out in front of the Lincoln Memorial of the long road they had travelled.

“You know my soul looks back in wonder, how I got over,” she sang, praising the heavens for allowing her people to make it this far. But their struggle was far from over.

A Hammond organ simmered, and rhythmic handclapping broke out as the singer closed her eyes and rhapsodised. In the past, the gospel classic How I Got Over had allowed her to cut loose for 10, even 15 minutes at a time as she worked church aisles and reached into the pews to grasp hands and anoint foreheads. She had recorded several versions of the song, but they were relatively tame compared to the heights she could reach in front of a congregation. Now, in the minutes before King was to speak, it was once again Holy Ghost time – the type of performance where Jackson surrendered not just her voice but her body to the moment, bending and twisting her robust frame as she reached for the notes.

The legendary singer would be the final musical performer on a day in which the civil rights movement mingled with folk music and gospel in front of a national audience – not just the quarter-million assembled to hear King speak about job equality and voting rights, but millions more watching on television and listening on the radio. Bob Dylan, Joan Baez, Odetta, the Freedom Singers and Marian Anderson also had performed, but it was Jackson who seized the day with a song that had particularly deep resonance in the African-American community.

There is some dispute about the exact origins of How I Got Over. Reverend William Herbert Brewster is often credited with writing the song, though it was reinterpreted and popularized by Clara Ward and her family gospel group, the Famous Ward Sisters. In a memoir written by Ward’s sister, Willa, she claims the song was inspired by a racial incident in Georgia during the early ‘50s while the family was travelling between performances. The Wards rode in a Cadillac, which drew unwanted attention from a group of whites, who blocked the road and viciously taunted the passengers. Only a feigned speaking-in-tongues seizure by the family matriarch, Gertrude Ward, prevented the incident from turning even uglier, and possibly deadly, Willa wrote in How I Got Over: Clara Ward and the World-Famous Ward Singers. The whites scattered when they saw Gertrude writhing, shaking and babbling.

The song offers a prayer of thanks, but as the civil rights era dawned, it took on broader connotations – implicitly addressing how African-Americans “got over” for centuries in the face of racism. How I Got Over turned into a huge gospel hit for Clara Ward and her family, and became a church standard, frequently performed by Jackson and other gospel singers when they wanted to “shout” an audience – bring worshippers out of their seats.

At the March on Washington, the song was particularly meaningful because of the context. Earlier in the day, Baez performed the gospel standard We Shall Overcome; Odetta declared I’m on my Way; Dylan sang Only a Pawn In Their Game, about the slaying of Mississippi civil rights activist Medgar Evers; and Peter, Paul and Mary harmonised on their hit version of Dylan’s Blowin’ in the Wind, itself based on the spiritual No More Auction Block. The music of the black church was now infusing and inspiring the political consciousness of folk music; gospel was no longer just for the religious but the foundation for much ‘60s protest music.

The music that day presaged a decade in which the sound of protest, of discontent, of outsiders raising their voices to plead for and finally demand equality became the foundation of national hits. The Impressions (People Get Ready, Keep on Pushing), the Staple Singers (Why? (Am I Treated So Bad)), James Brown (Say it Loud – I’m Black and I’m Proud) and Sam Cooke hit the pop charts with songs that, in Cooke’s words, predicted that A Change is Gonna Come.

King’s speech, too, was musical, its most famous passage essentially an improvisation based on the “dream” he had of “an America where my four little children will one day live in a nation where they will not be judged by the colour of their skin but by the content of their character”. He had been developing the theme in previous public statements, and was reminded on the steps of the Lincoln Memorial of the “dream” riff by Mahalia Jackson herself, who had seen King speak many times.

Jackson, the reigning queen of gospel, would continue to perform and adapt How I Got Over the rest of her life. When she suffered a difficult divorce and a series of heart attacks a few years later, the song took on new shades of resonance in marking her return to public performance.

It would also become a cornerstone of Aretha Franklin’s return to gospel music in a live recording at New Temple Missionary Baptist Church in Watts, Los Angeles in January 1972. How I Got Over anchored what would become the best-selling gospel album of all time, Amazing Grace, the song’s impact undiminished by the decades. At the time of the recording, Mahalia Jackson was in ill health, and two weeks later she would be dead (Franklin would travel to Chicago to sing at her mentor’s funeral). The congregation at New Temple included Clara Ward and her mother, but Franklin didn’t slavishly imitate her guests’ version. Much like Sister Mahalia did in 1963, Franklin made the song her own. She sings it in a higher key, and moves beyond the wrenching sense of hard-won – if temporary – emancipation in Jackson’s version. Instead, Franklin turns How I Got Over into a celebration of a dream that refuses to fade.