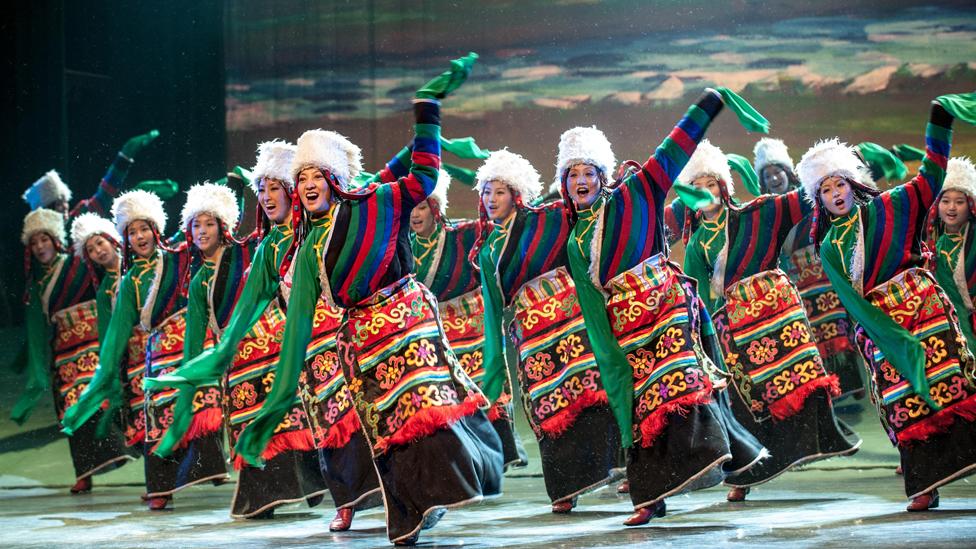 By Clarissa Sebag Montefiore 16th December 2013
The People’s Republic wants Tibetans and Uyghurs to sing and dance on TV – but do little else. Clarissa Sebag-Montefiore reveals how the government exoticises, and marginalises, its non-Han Chinese ethnic groups.

“For [more than] half a century, Tibet has lost its voice,” says the Tibetan poet Tsering Woeser, referring to the years since China invaded Tibet in 1950. “Artists’ space in Tibet has been squeezed so that artists do not have the freedom to show their real minds. In Tibet, ideology is so strict that space for publishing works is very limited. For self protection, artists and intellectuals are forced to be dumb.”

Last month, the Communist government of the People’s Republic of China announced that it would use propaganda films to publicise its ethnic minority groups – shooting one movie for each of the country’s 55 ethnicities including the Hui, Manchu, Mongols, Uyghurs and Tibetans. Their aim is simple: to promote China as a multicultural, multiethnic country and by doing so increase soft power at home and abroad.

But the films will most likely shun nuanced portrayals of China’s ethnic minority regions and their peoples – and they most certainly will not give voice to their grievances. Instead the People’s Republic’s minorities are commonly depicted in government-produced media as harmless entertainers who twist and twirl in bright costumes and hats. Singing and dancing troupes from various ethnic groups regularly appear on state television, with acts pumped up for large national events such as the CCTV Chinese New Year’s Gala. “Minorities get exoticised, somewhat like the noble savage,” explains Dru Gladney, a China specialist at Pomona College, California. “On the one hand they are seen as backward and on the other hand they are romanticised and are seen as pure.” 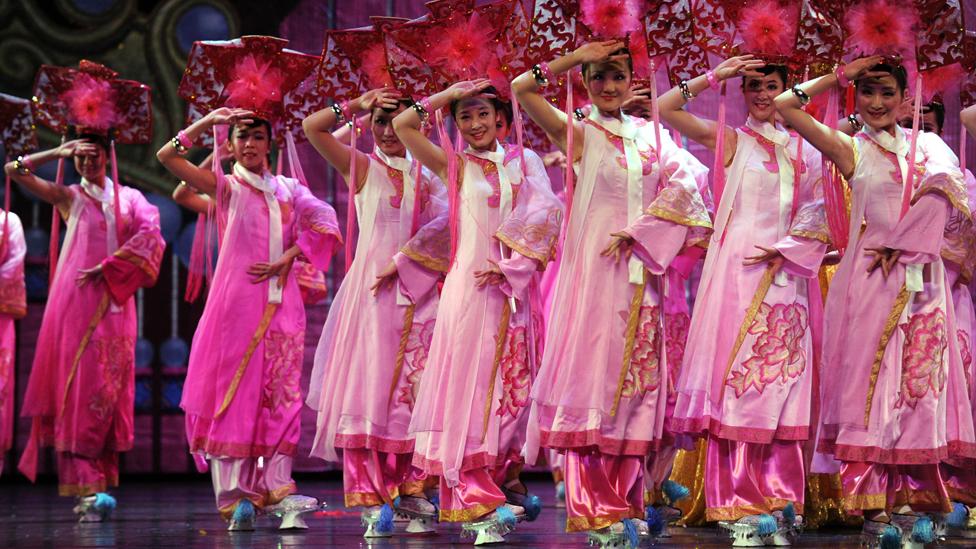 The Manchu delegation at the 2012 Ethnic Minorities Arts Festival (Corbis)

China has a complex relationship with its minorities, many of whom chaff under Chinese rule. Riots and unrest have periodically flared up in far-flung regions of the country, including the Tibet Autonomous Region, Inner Mongolia and the western province of Xinjiang (home to the Turkic speaking Muslim Uyghurs). As such, the dominant Han Chinese government needs to control – and contain – its more restive minorities. One way to do this is through propaganda under the guise of the arts. But, unsurprisingly, there is a vast gap between how the Chinese Communist Party represents minorities and how they represent themselves.

Some, like Woeser, an activist as well as a poet and prolific blogger, are fighting back. This October, Woeser published Immolations in Tibet: The Shame of the World; the cover of the book – an evocative outline of swirling flames – was designed by the dissident artist Ai Weiwei (the first edition is published in French). Woeser wants to bring attention to the more than 120 Tibetans who have set themselves on fire in protest of Chinese rule since February 2009. In the book Tibet is described as a “giant prison”.

Woeser’s works are banned in the mainland, and her freedom of movement is restricted (in 2003 the state called her second book, Notes on Tibet, “harmful to the unification and solidarity of our nation”). But that has not held back the poet. Although born in Lhasa, the administrative capital of Tibet, she writes in Chinese, rather than Tibetan, and now lives in Beijing. She sees Tibet depicted in stultifying binaries: “There are two attitudes towards Tibet – demonising and sanctifying. Tibet is not a pure land as many works describe, nor is it a terrible place. It is a normal country where people live – just like any other.”

In China, however, giving Tibetans control over their own narrative, and giving them the room to explore the good, the bad and the spaces in between, is dangerous territory. Instead, matters are simplified. Art that is allowed depicts the region as a touristic paradise. In the music video of the hit song I Want To Go To Tibet, by Mongolian singer Wulan Tuoya, images of the Beijing to Lhasa express train (considered a major feat by the government) are played alongside groups dancing. It was released in 2009 – the year that the Tibetan self-immolations started in earnest, largely as a result of severe crackdowns on religious freedom and suffocating surveillance by government authorities on the monasteries. 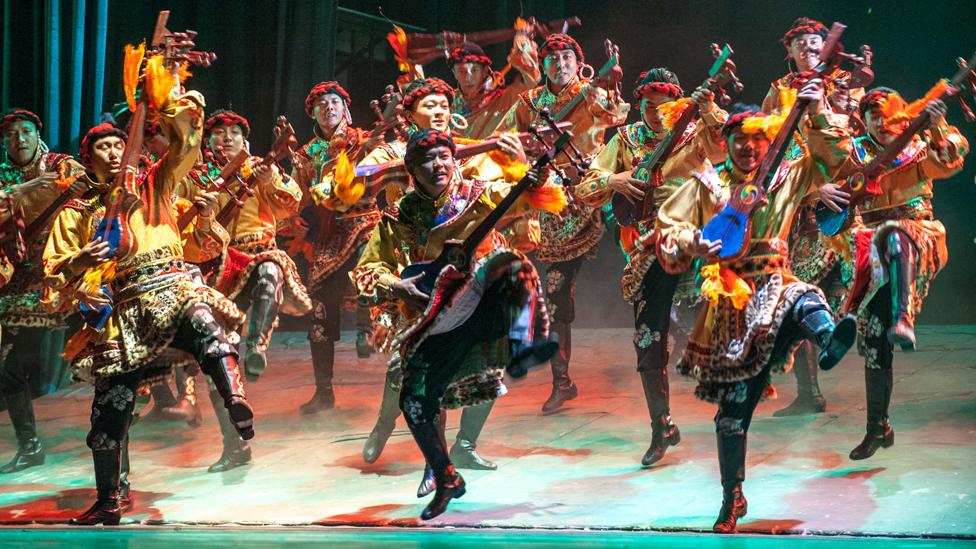 Musicians from Tibet at a Chinese government-sponsored show in 2012. (Corbis)

The ethnic minority artists who are active largely avoid contemporary, more realistic depictions of their homelands. “Most ethnic minority writers limit themselves to plain stories about their people, or their past,” explains the Beijing-based translator Eric Abrahamsen.

Abrahamsen is an editor at the literary magazine Pathlight which translates new Chinese fiction into English. Their next issue will be on ethnic minority writers, but it is proving a challenge. “There is really no genuine public discussion about China’s ethnic minorities and their place in larger society, much less a discussion that includes the voice of the minorities themselves,” he says. “Many of these writers are part-Han already, and many of them are heavily romanticising their ethnic subjects: [the poet] Alai [writes] about Tibet, Zhang Chengzhi about the Hui, Jiang Rong about the Mongolians.”

Zang Xiaowei, a professor of Chinese studies at the University of Sheffield, says that mass media depictions of ethnic minorities are carefully curated to bolster the Communist Party’s “mandate [and] legitimacy to govern China”, a vast land of disparate cultures. What’s more, many scholars believe that China “has feminised ethnic minorities to show the superiority of Han culture”.

Crucially, the party legitimises its own actions toward these ethnic groups by portraying them as under-developed. In Tibet, for example, one argument proffered by the government is that Chinese rule has broken down a barbaric feudal system and brought important everyday benefits and infrastructure to the people, from roads to education. Such views are juxtaposed with a celebration of Tibet’s cultural roots, such as folk dancing or singing – much of which, ironically, have been eroded by top-down development.

Music is one mode of expression that ethnic minorities are trying to make their own. Hanggai is an Inner Mongolian band whose tunes merge folk music and punk rock, creating a following at home and abroad. The band often performs in traditional clothes as a way to take ownership over their ethnicity, says Jonathan Campbell, author of Red Rock: The Long, Strange March of Chinese Rock & Roll. “Hanggai is taking back that happy, smiling minority dancing on television and making it work for themselves.” 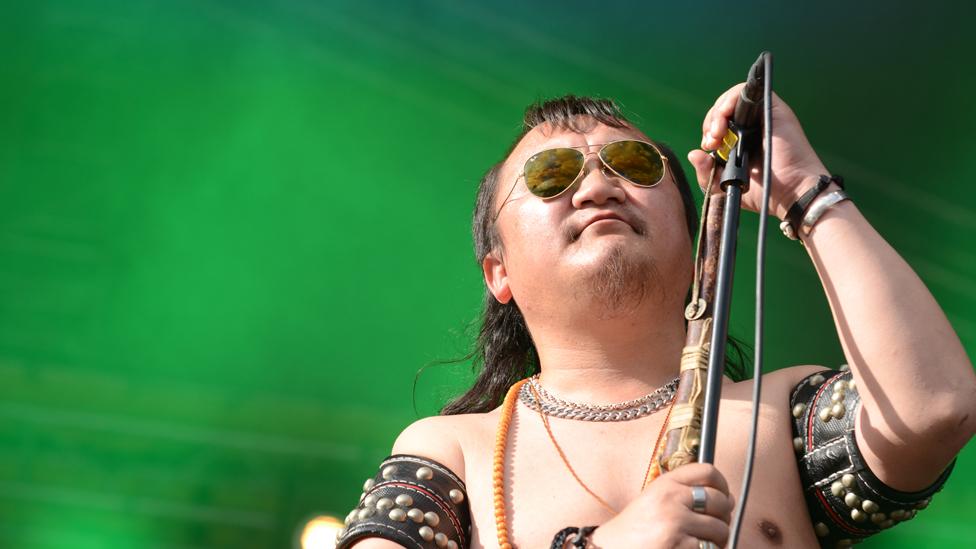 In The Silk Road of Pop, a documentary about Xinjiang’s modern music scene released earlier this year, the Uyghur hip-hop band Six City raps catchy tunes with an addictive enthusiasm. They live in Urumqi, Xinjiang’s capital, a city that in 2009 endured violent riots in which nearly 200 people, both Han Chinese and Uyghurs, perished. The vast influx of Han immigrants to the area, coupled with employment discrimination against the native population and limits on religious freedom, have led to seething ethnic tensions.

In Chinese state media, Uyghurs, like Tibetans, are subject to typecasting. They are often labelled as either terrorists or as a people who are too busy singing and dancing to cause issues. In May 2013, Shi Dagang, Xinjiang’s deputy governor, claimed that Uyghurs are a “simple hearted and honest, very kind and unaffected” people who “love guests” and treat them to “meat and wine with song and dance”. The comments came after 21 people died in the region in another outburst of ethnic violence.

For Six City, however, music is less about politics and more about rejecting stereotypes. “If you’re from the Uyghur minority, you need to play Uyghur folk music. They don’t care that we can play hip-hop or pop,” says one Six City band member in The Silk Road of Pop. His bandmate quickly interjects: “it’s like being clowns.” 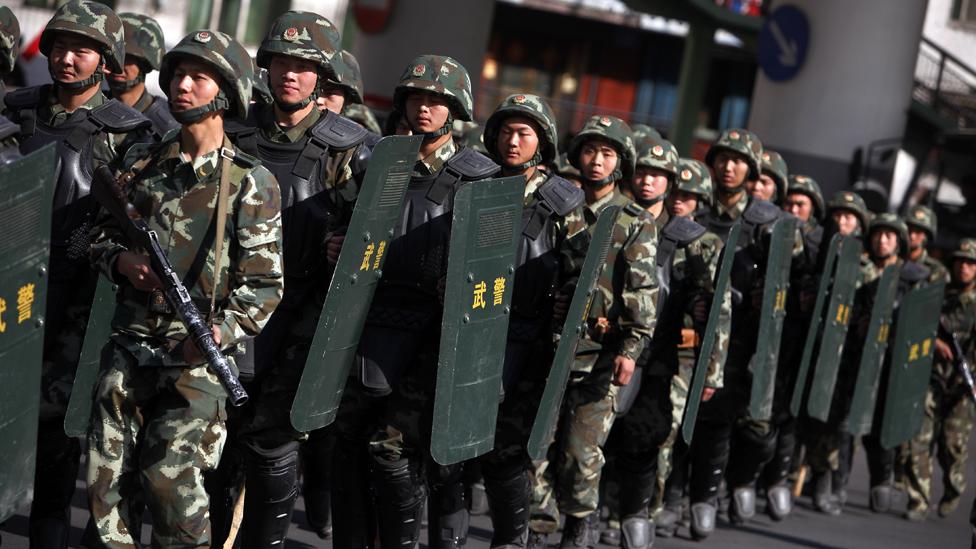 Above all, artists like Six City want to carve out their own identity, from the Han Chinese population, from the government, but also from their own – often more traditional – elders and parents. They want their voice to rise above propaganda to show the world beyond what they are really like. “The whole world thinks we’ve disappeared, that we’re extinct,” laments a Six City rapper in The Silk Road of Pop. “What’s the most important thing for Uyghur people now? It’s not development. The most important thing is that people know who we are.”