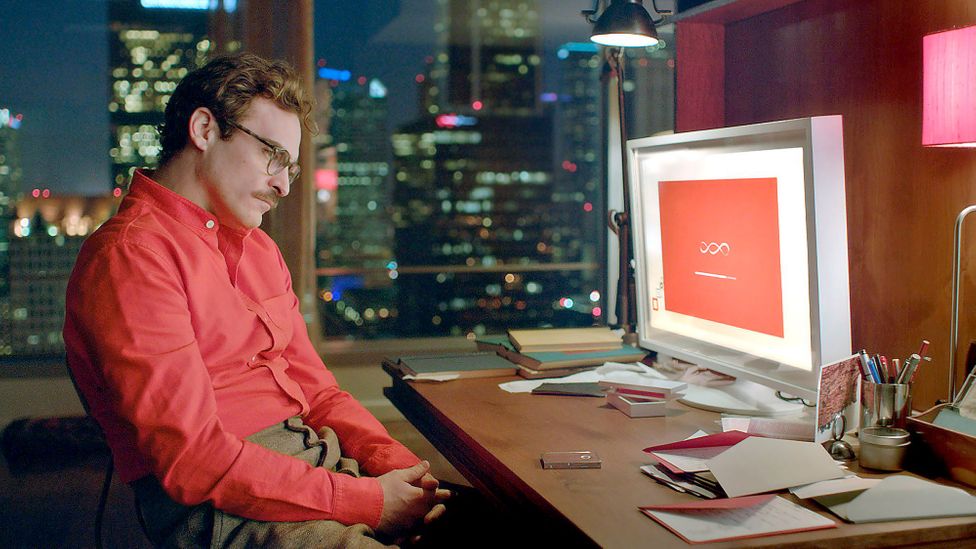 By Solvej Schou 13th January 2014
Director Spike Jonze replaces the genre’s usual escapism with a vision of the future that reveals hard truths about the present, writes Solvej Schou.
W

What does it mean to be human? That question, perhaps the defining one of our existence, fuels Spike Jonze’s new movie Her. Set in a near-future Los Angeles, the film follows a lonely writer, Theodore (Joaquin Phoenix), who forms an intimate bond with his computer operating system ‘Samantha’ (voiced by Scarlett Johansson). Theodore falls for her – or at least her intelligence, wit and rich, alto voice.

Movie predictions – from flying cars to deep-space voyages – rarely materialise. But how the cinema depicts the future says much about the present. Her is no exception. It shows a convergence between human life and artificial intelligence that feels all too likely. Technology has allowed us to separate our minds and bodies to an unprecedented degree. As we adopt more and more of a hybrid digital identity – or identities – we give the technology around us human attributes. Samantha is a wholly sentient descendant of iPhone personal assistant Siri.

While the directors of so many sci-fi films have crafted alien visions of the future, Jonze’s is defined by its familiarity. It is a society in which technology is omnipresent but nostalgia rules: everyone is so plugged in to their computers they wear earbuds to receive near-constant updates, yet books printed on paper are making a comeback and handwritten letters have become widely popular again. People pay professionals like Theodore, however, to craft those handwritten notes that they themselves cannot write – paying to simulate affection, the fake passed off as real. Jonze’s attention to these banalities makes the film’s vision feel all the more genuine.

“I'd like to think everything in the film is very real,” says production designer KK Barrett, who crafted Her’s look to be down-to-earth and familiar. “It needed to be, [in order] to accept Samantha as real.”

Her’s attention to real-world authenticity in a sci-fi context is unusual. “Science fiction has typically been very divided on the issue of technology,” says Jeffrey Sconce, a professor of film and media studies at Northwestern University. “It usually imagines either a Star Trek utopia of democratic empowerment or a Terminator-esque hellscape of sentient machines stomping us into dust.” Artificial intelligence in particular is usually portrayed as submissive, like the robots in Forbidden Planet and Star Wars, or homicidal, as in Demon Seed or 2001: A Space Odyssey. “Her is probably more realistic. A technological dystopia is more likely to be alienating and boring than violent and cataclysmic,” he says.

Ghost in the machine

Will audiences connect with a sci-fi film that’s quiet and thoughtful when for so long the genre has been loud and propulsive? If they do, Barrett thinks there is a particular reason why. “It is not a film about technology at all, even though the primary conceit is of an artificial entity that learns from other humans to be more human,” the production designer says. “Samantha evolves from friend to lover to student of what it is to be human.”

A person interacting with a piece of hardware as if it were another person is also a deeply human thing.  “We have always had relationships with objects where we treat them like they are alive, from playing with dolls to saying ‘my car doesn’t want to start today,’” says D Fox Harrell, an associate professor of digital media studies and artificial intelligence research at MIT and author of the new book Phantasmal Media: An Approach to Imagination, Computation and Expression.

“We should never mystify technology to the point where we forget that it was imagined, and then created, by humans based on human values to attempt to fill human needs and desires,” Harrell says. “The technologies shown in Her reveal some of the values of their creators and [the society in which they exist].” At the beginning of Her, a computer program creates Samantha for Theodore after having him answer a psychological profile that asks questions about his personal life. Her’s reversal of the sci-fi norm – its focus on humans’ influence on technology rather than technology’s influence on humans – is what makes for such a profound vision.

Perhaps it should not be surprising, though, that it would take a film – not a work of art from another medium – to explore the increasingly complex relationship between humanity and technology in such a reflective way. The cinema has blurred the distinction between art and technology like no art form before it, presenting a virtual reality out of 24 still-frames per second. ‘Suspension of disbelief’, our acceptance of what is on screen as real, has become an entrenched part of our lives. For an audience at the movies, emotional reality can emerge from a medium that is at its core artificial. Much like what happens for Theodore during his blossoming relationship with Samantha. As new technologies continue to enter our lives and the boundary between reality and virtual reality becomes ever more tenuous, we would do well to remember the great lesson of cinema, and of Her in particular – that out of what appears fake can come truth.

Film
1Sex on screen: No longer taboo?
Film
2Eight films to watch in 2014
Big In...
3The cinema where you are the star
Art
4The beauty of maps
Around the BBC