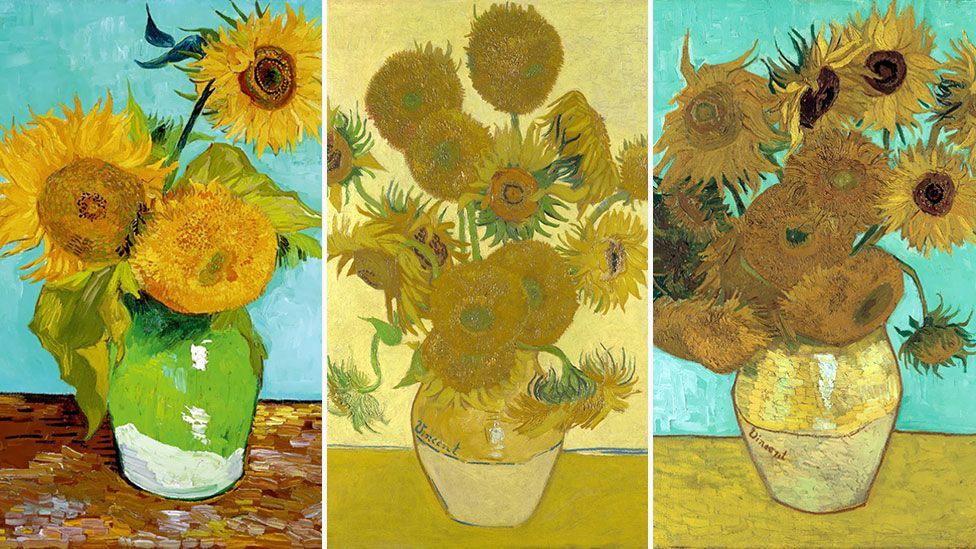 By Alastair Sooke 21st January 2014
One of the Dutch artist’s most famous works is actually part of a series of sunflower paintings. Alastair Sooke shows how these masterpieces came to be.
S

Sometimes a work of art is so dazzlingly famous that it can blind people to its original context and meaning. That surely is the case with Vincent van Gogh’s Sunflowers.

Take the version in London’s National Gallery that the Dutch artist painted in Arles in the South of France in August 1888. Fifteen sunflowers erupt out of a simple earthenware pot against a blazing yellow background. Some of the flowers are fresh and perky, ringed with halos of flickering, flame-like petals. Others are going to seed and have begun to droop.

In part a meditation on the vagaries of time, the picture gives a dynamic, ferociously colourful twist to the long tradition of Dutch flower painting stretching back to the 17th Century. Since it entered the National Gallery’s collection in 1924, it has also proved phenomenally popular. Last year, more postcards of this painting were sold in the gallery’s shop – the exact figure was 26,110 – than of any other picture in the entire collection. 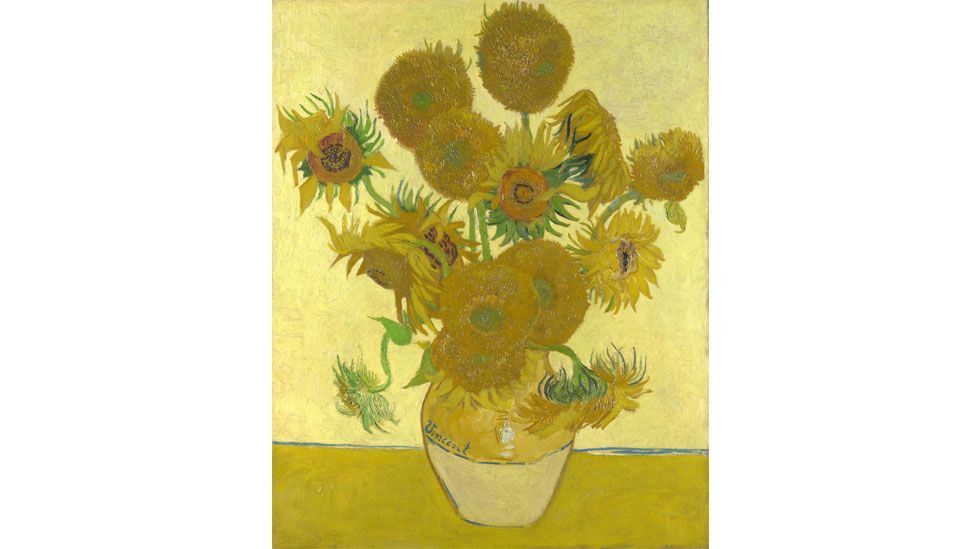 But many of the more than 5m people who visit the National Gallery every year will be unaware that the painting belongs to a series of four extraordinary sunflower still lifes that Van Gogh created in less than a week during the summer of 1888, when a cold northerly wind prevented him from working outdoors.

The first of these, now in a private collection and sometimes described as Van Gogh’s ‘unknown’ Sunflowers, shows three yellow-orange blooms in a green glazed pot against a turquoise background. It has not been exhibited since 1948, when it was lent to the Cleveland Museum of Art for a month.

A second picture, again with three flowers in a pot as well as three more on the table in the foreground, in front of a a rich royal blue wall, was destroyed during the American bombardment of the Japanese town of Ashiya in 1945. A third painting, similar to the one in the National Gallery, but with 14 sunflowers and a turquoise background, is in the Neue Pinakothek gallery in Munich.

Moreover, not long after he had executed these four Sunflowers, Van Gogh created three further replicas or variations – one of which is being loaned by the Van Gogh Museum in Amsterdam to the National Gallery, where the two pictures will hang side by side from 25 January until 27 April.

A bouquet of art

“The public is hardly aware that Van Gogh created a series of paintings of sunflowers,” says Leo Jansen, a curator at the Van Gogh Museum and editor of the artist’s letters. “For nine out of 10 people I tell, it’s news.” “A lot of people know one of the Sunflowers, and don’t even realise there was a series,” agrees Martin Bailey, whose book The Sunflowers Are Mine: The Story of Van Gogh’s Masterpiece was published last year. 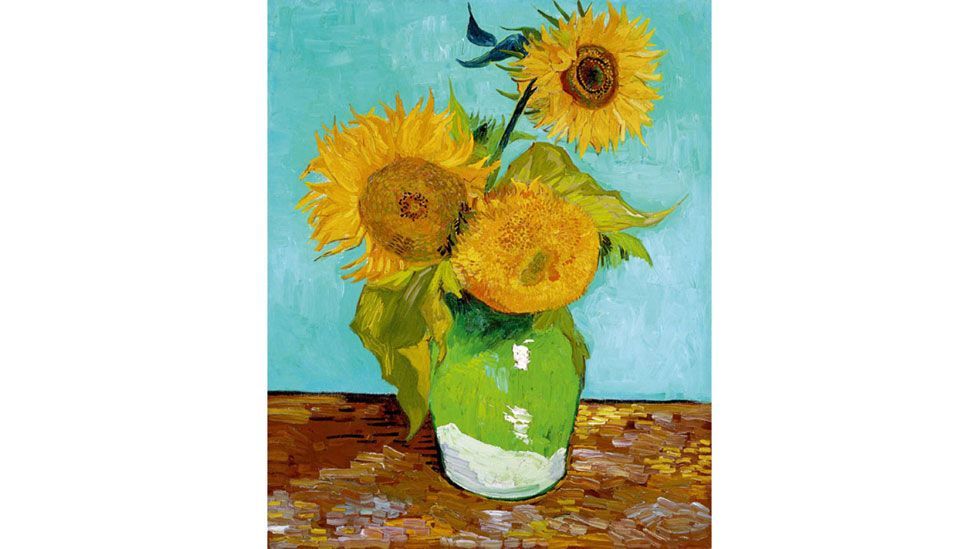 The first Arles Sunflowers painting is privately owned. It hasn't been shown since 1948.

Van Gogh painted sunflowers for the first time in the summer of 1886. Two years later, his interest re-emerged after he settled at Arles, just north of Marseille in Provence. Having invited the Post-Impressionist French artist Paul Gauguin, whom he admired, to join his Studio of the South, he began painting sunflowers to brighten up the whitewashed interiors of the yellow house he was renting at 2 Place Lamartine, not far from the town’s railway station and brothels.

When Gauguin, having accepted Van Gogh’s invitation, began dragging his heels, the Dutchman earmarked the last two of the four original Sunflowers for the modest bedroom where his guest would sleep following his arrival that autumn. “Van Gogh saw the production of the Sunflowers for Gauguin’s bedroom as a way of enticing his friend to come from Brittany,” says Bailey.

The pronounced blue outlines in the painting in the National Gallery can even be understood as a kind of homage to Gauguin, whose work had already incorporated a similar device reminiscent of the narrow bands separating flat colours in cloisonné enamel or stained glass. “By decorating his house in Arles with a series of sunflower paintings, he wanted to prove to Gauguin that he stood his ground as an artist,” explains Jansen.

According to Martin Gayford, author of The Yellow House: Van Gogh, Gauguin, and Nine Turbulent Weeks in Arles, “Gauguin was bowled over by the Sunflowers, which he repeatedly praised and asked for as a gift. Years later, in the South Pacific, Gauguin himself painted some sunflower pictures in apparent homage to his erstwhile housemate.” 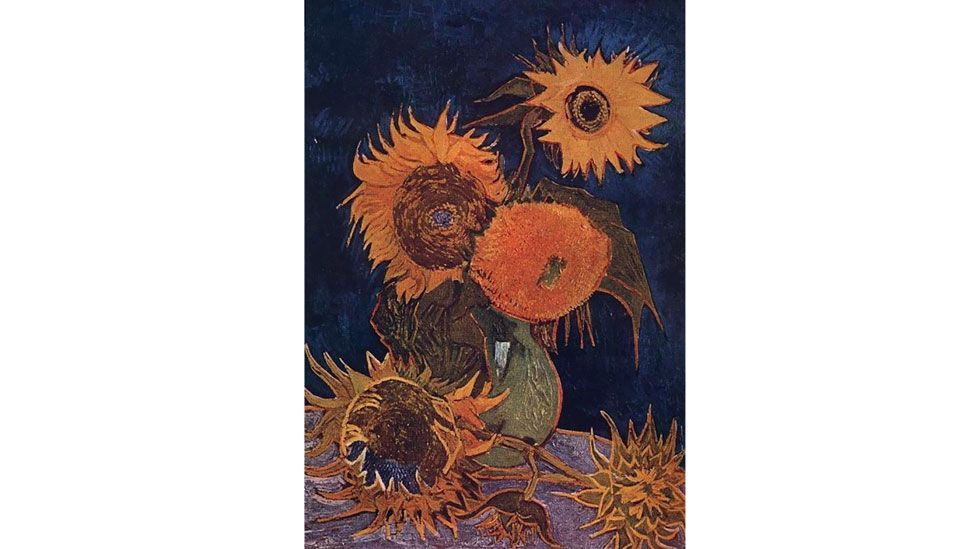 This version was destroyed in Ashiya, Japan due to fire during World War II.

As the series took off, Van Gogh’s Sunflowers transcended his relationship with Gauguin. “I think he painted them for the sheer joy of it,” says Jansen. “The bright yellow of the flowers that he could combine into brilliant contrasts, the forms and lines of petals and stems: they offered a great challenge for a painter.” “Van Gogh was at the height of his powers in the summer of 1888,” explains Bailey. “He painted the Sunflowers quickly and with great energy and confidence.” Van Gogh wrote to his brother Theo in late August: “I’m painting with the gusto of a Marseillais eating bouillabaisse [Provençal fish stew], which won’t surprise you when it’s a question of painting large Sunflowers.”

Van Gogh recognised at once that he had created something important and relished the fact that his sunflowers were so distinctive that they functioned almost like an artist’s signature. As he told Theo in January 1889, while other artists were known for painting particular flowers such as peonies and hollyhocks, “the sunflower is mine”. “Van Gogh realised early on that sunflowers were a uniquely resonant motif which he could make his own,” explains Christopher Riopelle, curator of post-1800 paintings at the National Gallery.

This, in part, accounts for the popularity of Van Gogh’s Sunflowers today: they are a kind of visual shorthand for the artist, whose dramatic and difficult life, culminating in his death from a self-inflicted bullet wound in 1890, continues to fascinate the public.

Other well-known works of art also exist in series, such as Monet’s paintings of poplar trees and haystacks or the various versions of Munch’s The Scream. But in the case of Van Gogh’s Sunflowers, the fact that he painted several versions is not the main reason for their celebrity. “I’m not sure that the series has made the Sunflowers popular,” says Bailey. “Of the original four pictures, two are ‘missing’: one was destroyed in the war, and the other has always been hidden away in private collections.” 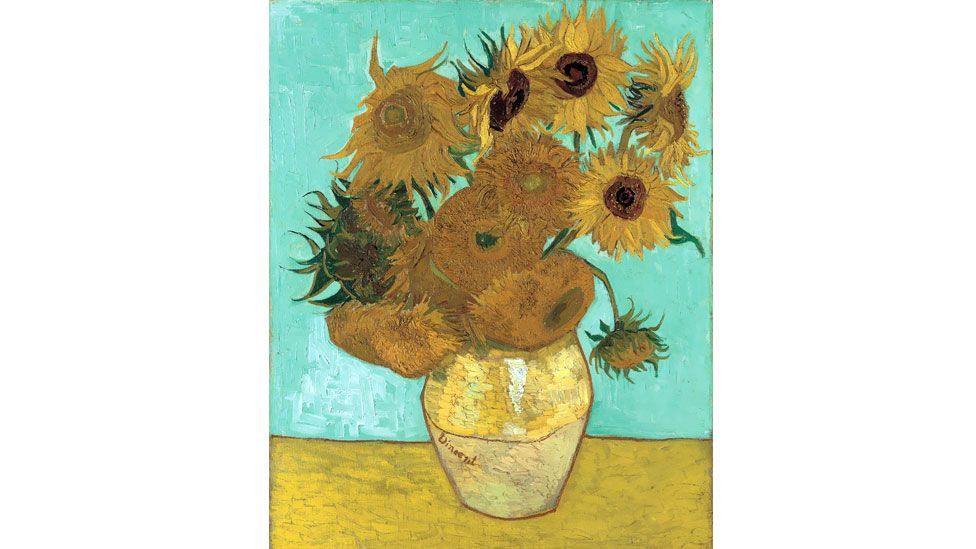 This version, similar to the National Gallery's, hangs at Munich's Neue Pinakothek.

Rather, Van Gogh’s Sunflowers thrived during the 20th Century, when reproductions of them were spread around the world, thanks to their immediacy, clarity, and force. “Instead of trying to render exactly what I have before my eyes,” Van Gogh told his brother shortly before beginning the series, “I use colour more arbitrarily in order to express myself forcefully.” This emotional, subjective use of colour would prove enormously influential on modern art, and continues to speak directly to people today. “I’d like to paint in such a way that…everyone who has eyes could understand it,” Van Gogh once said.

For Jansen, this, coupled with the compelling story of the artist’s life, as well as the value of the pictures (in 1987, Van Gogh’s unsigned Sunflowers copy became the most expensive painting ever sold at auction), proved irresistible: “The popularity of the Sunflowers is a combination of, on the one hand, their beauty, emotional impact and a touch of the human condition, and on the other hand the public’s fascination with fame, money and myth. There’s something there for everyone.”