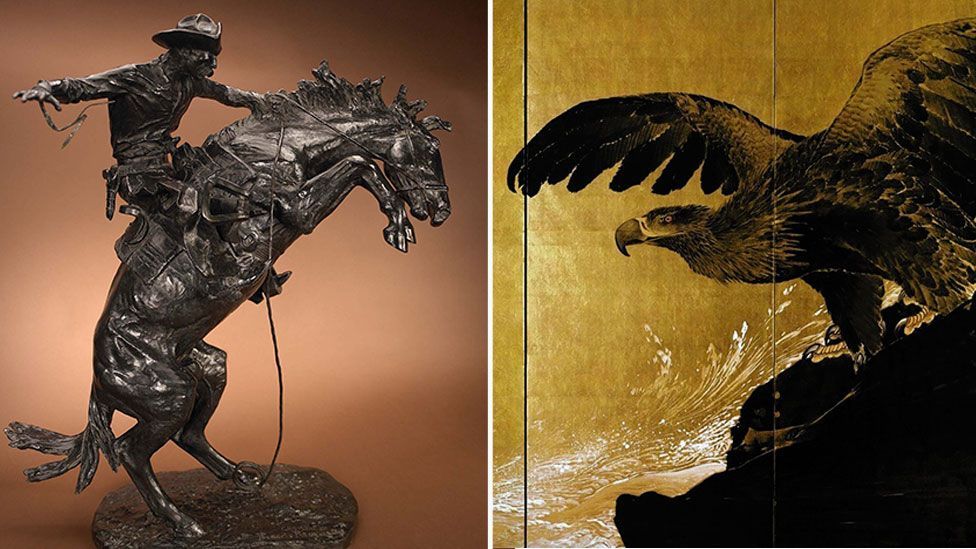 Seattle and Denver’s art museums have bet key pieces on the outcome of Sunday’s game in a tradition that offers art fans some relief from football fever.
I

It’s not just the Seattle Seahawks and the Denver Broncos squaring off at the Super Bowl this Sunday: artworks from the teams’ hometowns will also go head to head.

Museums in Seattle and Denver are betting pieces in their collections that represent their teams on the outcome of the game. The winner will get to display the loser’s artwork for three months; the loser will pay for shipping.

If the Broncos lose, Denver will loan Frederic Remington’s The Broncho Buster, a bronze sculpture from 1895 that the museum describes as “one of the most enduring visual images of the American West”.

If the Seahawks flounder, the Seattle Art Museum will send Sound of Waves, a six-panelled Japanese screen from 1901 showing a spread-winged eagle. The Museum had pledged a 135-year-old Nuxalk tribal bird mask, but a spokeswoman said that a switch was made after the Nuxalk Nation objected.

It is not the first time Super Bowls have inspired cultural betting: in 2010, New Orleans received JMW Turner's The Fifth Plague of Egypt after its team beat the Indianapolis Colts. Fittingly, it was hung next to the artwork bet by New Orleans, Ideal View of Tivoli by Claude Lorrain, a painter admired by Turner. In his will Turner left works to the National Gallery in London on the condition that they hang next to works by Lorrain.

In 2011, the Milwaukee Art Museum received Pierre-Auguste Renoir’s Bathers With Crab from Pittsburgh’s Carnegie Museum of Art in a wager involving two Impressionist works. (Milwaukee had staked Boating on the Yerres by Gustave Caillebotte). The art blogger who had proposed both bets, Tyler Green, told CNN: "I thought that I'd like to see more art museums come down off the hill, so to speak, and be part of their communities in a more engaged way," he explained. "Besides, it seemed like it might be a fun way to hijack America's two weeks of rampant football-ism by getting some art in there," he added.