Loading
Art | Picture of the day
Hugh Turvey: The man who X-rayed a motorbike
Share using EmailShare on TwitterShare on FacebookShare on LinkedinShare on Whatsapp 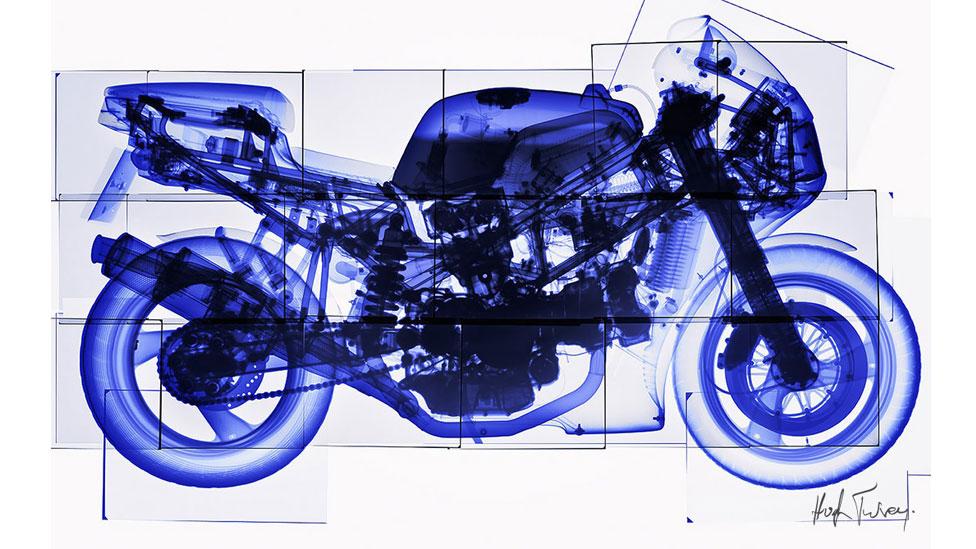 The British photographer wasn’t happy shooting objects: he decided to look inside them, too.
H

Hugh Turvey originally wanted to be a rock ‘n’ roll photographer – but his career took an unexpected turn in 1996. While an apprentice to music photographer Gered Mankowitz, he was asked to create a broken bone image for an album cover. Looking through a bucket of discarded X-rays in a local hospital, Turvey was inspired to experiment with a different kind of photography.

The British artist was tapping into a tradition: in 1922 Surrealist photographer Man Ray created his first ‘rayograph’, a style that Cocteau likened to “paintings with light”. Objects placed on light-sensitive paper left a ghostly X-ray impression; pictures could be made without the use of a camera.

German-Australian photographer Helmut Newton turned a series of X-rays into a fashion shoot, taking models wearing Van Cleef and Arpels jewellery to a radiologist. His shot of a foot in a stiletto is mirrored by Turvey’s Femme Fatale image.

Turvey uses everything from medical equipment to airport security technology, depending on his subject. He has photographed an elephant’s skull using an industrial-scale machine, and looked inside a rose with a device similar to those used by dentists. He became the artist-in-residence at the British Institute of Radiology in 2009.

This motorbike image was one of Turvey’s more time-consuming projects.  “The Ducati 888 was X-rayed many times and these were combined as a montage of pieces,” he says. “It was a very laborious process that took over two months to complete from beginning to end… but was completely worth it.”

Turvey’s images will be displayed in an exhibition at London’s Oxo Tower Wharf from 12 February.