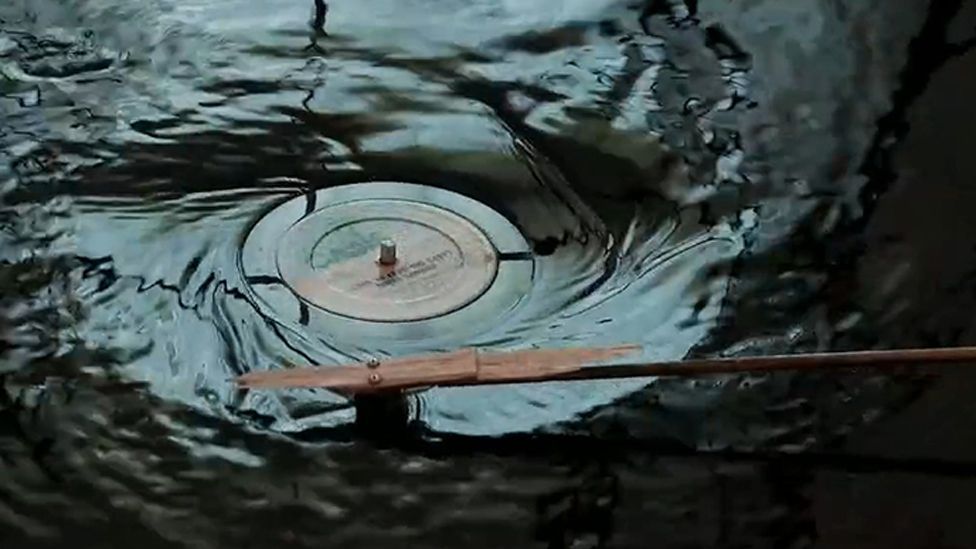 Artist Evan Holm first submerged a turntable three years ago, playing Brahms in a Tupperware pot. “I had no idea what to expect,” he says. “I was brought close to tears when the tone and pitch of this sweet lullaby emerged from beneath the surface of the water.”

Inspired by an image of “a quietly swirling record underneath dark water”, Holm set out to turn his prototype into a piece of art.

“I'm not an engineer, so I had a very steep learning curve,” he says.   “The leaks were an adventure, as I started bringing the prototype to openings in galleries with beautiful wood floors.”

Holm has exhibited the turntables at the San Francisco MoMA, and will be taking them to the California Academy of Sciences later in 2014.

Moving the installation is no easy feat. Holm fills a pool with 200 litres of water, tinted with Sumi Ink until it is opaque, after constructing his sound system. Made up of two turntables whose electrics have been removed and placed in the branches of trees above the water, it plays records through styluses with components waterproofed by Holm.

The spinning vinyl creates ripples that form their own soundscape. “The ink mimics the black vinyl of the record so that the border between fluid and solid dissolves into motion,” says Holm, who has previously turned old vinyl into fossils and built a concrete bench in a wide circle around a sapling to allow for its growth into a larger tree over decades.

Holm’s approach focuses as much on artefacts of the present as the past and his installation brings a sense of mystery to an obsolete technology.

On his website, Holm envisages a time when all traces of human culture “will dissolve back into the soil”. Yet he doesn’t want the piece to be mournful: “This is an optimistic sculpture, for just after that moment of submergence, tone, melody and ultimately song is pulled back out of the pool... back into a living and breathing realm.”