Loading
Books
A mostly healthy obsession: The joy of binge reading
Share using EmailShare on TwitterShare on FacebookShare on Linkedin 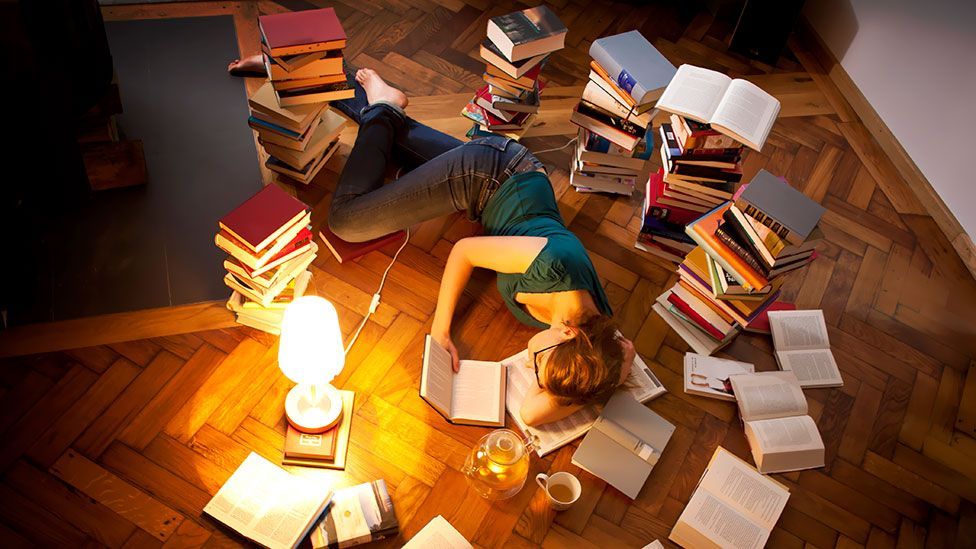 By Jennifer Keishin Armstrong 21st October 2014
Publishers are satisfying the demand for more books more quickly, reports Jennifer Armstrong, who shares her own experience of obsessive marathon reading.
A

Addiction may not always be a bad thing. Just as Netflix made binge viewing of television popular, book publishers are now looking to feed readers’ craving for sequels to beloved novel series by releasing follow-up instalments more quickly than ever before. Call it binge reading, a concept that, up until now, was only possible with series that already had multiple volumes on bookstore shelves.

Publishers know a feeding frenzy when they see one. Fans of suspenseful series like Divergent and The Hunger Games devoured those books as soon as they were published, even with a wait of a year or morebetween sequels. So did Game of Thrones readers. But those fans are also notorious for complaining about author George RR Martin’s slowness in finishing the saga’s final two books. Blogger Book Rock Betty writes, “Sometimes I even hesitate picking up the next book of a series as soon as it is released because I know the wait for the next or final book will seem like an eternity.” Publihsers have heard those complaints:  the blockbuster success of EL James’ Fifty Shades of Grey series marked the advent of a new strategy aimed specifically at binge readers – the binge release. Unlike Thrones or The Hunger Games, all three Fifty Shades novels were released within six months.

I had my first experience of binge reading when I was 12. I would go to the library almost every day after school – in the last aisle on my left, I would crouch before the lowest shelves and pluck out the next in the mega-series Sweet Valley High. I would take the battered copy to a nook in the back corner and read it, transforming myself from a baffled pre-teen into the beautiful blonde Wakefield twins, Elizabeth and Jessica. Soon, in my head, I’d be careening around the streets of southern California in a red Fiat Spider convertible, squabbling about who can join the high school sorority. I would get through roughly one book per sitting, which was fine since there were about 50 of these published before I got to high school.

Today, it’s even much easier to be a binge reader. The first instalment of Jeff VanderMeer’s sci-fi series Annihilation hit shelves in February, with a second and third to arrive by September. Likewise, February thriller Archetype by MD Waters will get a follow-up, Prototype, by July. Penguin Berkley and NAL Publishing Groups started a Binge Reads Facebook page and a #bingereads hashtag to promote series fit for rapid consumption, like JR Ward’s paranormal romance series, The Black Dagger Brotherhood and Fallen Angels. It seems to be working: the page already has nearly 10,000 fans after just a week online. It makes sense that a release cycle geared to bingeing is inviting for publishers – it means making more money in a shorter period. My experience bears this out: if I had to pay to get each new Sweet Valley High book, I would have shelled out as much of my allowance as fast as I could.

Binge releasing works better with some series than others. Could publisher Random House have counted on holding the audience’s interest for years on end with the Fifty Shades series? Better to strike while the S&M fad is still hot. And in the case of my beloved Sweet Valley High — as well as countless contemporary teen series — the core audience will inevitably outgrow the obsession and move on.

A later-in-life reading encounter I experienced proves binge reading’s financial incentive for publishers. I read Bridget Jones’s Diary a little later than the rest of the world, in 2000, when it already had a sequel. This was lucky, since I ended up finishing the book in a matter of days during a business trip to Atlanta. I read at Starbucks, in the lift and under the covers of my hotel bed. I reluctantly took a break the next day to conduct some actual business, then rushed back to my bed, ordered room service and finished by about 10 pm.

I suddenly felt bereft without Bridget to keep me company. How many pounds was she losing now? Was she still in love with Mark Darcy? I brooded over these questions until I remembered that the answers were out there – Bridget Jones: The Edge of Reason was on the shelves of a bookstore somewhere, waiting to give them to me. We used the internet differently in those days and I was in an unfamiliar city: I could neither find an open bookstore nor order online. I had to wait three long days until I returned to Chicago, rushed to my Barnes & Noble and embraced my new friend once again. It barely mattered that the second book didn’t live up to the first, as long as I felt like Bridget was still with me for a little longer. This is the kind of obsession on which publishers are banking.

Mad about the book

My Bridget Jones encounter highlights one of the best parts about binge-reading: it’s an experience in which you suspend critical judgment and allow pure joy to take over. You like hanging out with these characters, regardless of their literary merit – which explains why many binge-reading candidates seem to fall into mainstream genre-fiction categories rather than being Nobel Prize winners. As the writer Phil Edwards points out: “If you ask a House of Cards fan what happened in season two, episode four, they'll have no idea because they gorged too quickly. Binge-reading is the same thing, but with books. Practically, it can mean everything from skimming opening and closing paragraphs to completely skipping the stuff you don't like.”

Of course, go too crazy too fast with binge reading and you can feel as awful as you do after traditional bingeing on food and drink: overfilled, dazed and in need of sunlight and exercise. The good news? Even the worst binge reading has got to be among the most productive of binge behaviours. Yes, it may cause you to obsess a little – see Fifty Shades of Grey fans – and it may make you feel irrationally close to the characters, as if you actually know them or even have lived their lives. But as someone who writes books for a living and has also been a life-long reader, I can tell you: that’s the dream for both parties.

And sometimes a great book simply overtakes you, even if it’s far from a guilty pleasure. When I read Dave Cullen’s astonishing book Columbine, a deep investigation into the 1999 school shootings in Littleton, Colorado, I stayed up several nights reading until I couldn’t keep my eyes open then suffered terrible dreams when I nodded off. But Cullen’s work was so great, and so terrifying, it literally kept me up at night; frankly, that felt like the most rational response to this particular story. Sometimes we need to escape the world, sometimes we need desperately to engage with it. The magic of books is that we can do both through them, with nary an extra calorie or hangover to show for it.