Loading
Between the Lines | Books
Was Chinua Achebe Africa’s most influential author?
Share using EmailShare on TwitterShare on FacebookShare on LinkedinShare on Whatsapp 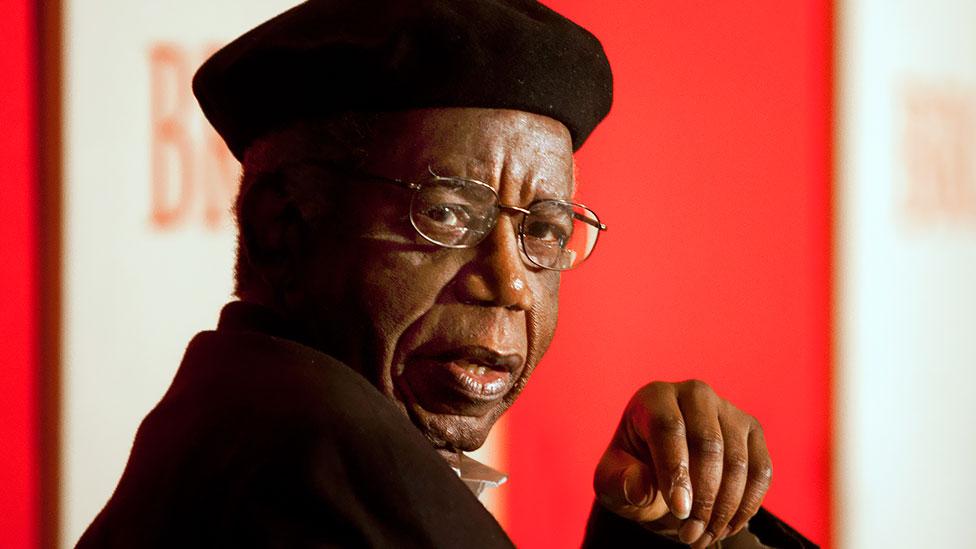 By Jane Ciabattari 20th March 2014
Chinua Achebe, who died last year, left more than books as his legacy. He inspired some of today’s most talented writers, argues Jane Ciabattari.

When the legendary Nigerian novelist Chinua Achebe died aged 82 on 21 March 2013, tributes poured from around the globe. His landmark novel Things Fall Apart, published in 1958 when he was 28, follows a traditional village patriarch in the 19

Century, who experiences the arrival of Christian missionaries in what is now Nigeria. It stripped away the colonial scrim, gave authority to a voice arising from centuries of cultural tradition that predated European contact and served as the catalyst for postcolonial literature the world over.

“The popularity of Things Fall Apart in my own society can be explained simply,” Achebe once said, “because my people are seeing themselves virtually for the first time in the story… this was the first time we were seeing ourselves, as autonomous individuals, rather than half-people, or as Conrad would say, ‘rudimentary souls.’ We are not rudimentary at all, we are full-fledged souls.”

Following Achebe’s death, Wole Soyinka (winner of Africa’s first Nobel Prize in literature) and John Pepper Clark – two of the ‘pioneer quartet of contemporary Nigerian literature’, along with Achebe and the late Christopher Okigbo – issued a joint statement honouring his works for “their enduring testimony to the domination of the human spirit over the forces of repression, bigotry and retrogression.” But, they wrote, “we take consolation in the young generation of writers to whom the baton has been passed.” If Achebe was the trail-blazer, his Nigerian-born literary descendants – the most notable among them Chimamanda Ngozi Adichie, Ben Okri and Chris Abani – are distinctive originals whose work is built upon the freedom to explore an infinite number of storytelling forms and invent a few of their own. Achebe’s spiritual heirs have charted astounding new literary territory and are receiving major recognition as among the most inventive writers working today.

“Something dreadful has happened,” novelist Chimamanda Ngozi Adichie wrote in her essay Igbo Elegy on Hearing of the Passing of Professor Chinua Achebe. “Who is now going to be our reference of pride?” she asked. “Who speaks now for us in the contest of wills? Who is even going to prepare our path?” Adichie, who won the National Book Critics Circle Award for her novel Americanah on 13 March, was born and raised in Nigeria, and is inspired by what she calls “a sense of rootedness” – a deep affinity for her heritage.  At the age of seven she moved with her parents into the house on the Nsukka campus of the University of Nigeria where Achebe lived when he chaired the English department there.

Adichie met Achebe a few years before he died, at events celebrating the 50th anniversary of Things Fall Apart. “I greeted him, and he said ‘jisie ike’. Which loosely means ‘well done and keep it up.’ And then I promptly fled! He was kind and genuine and completely himself. When I heard he had died, I was heartbroken,” she says.  “He wrote literature of the highest order but he was never precious. One got the sense with him of a never ending curiosity, that he was a calm and careful student of life."

Like Achebe, Adichie is a masterful storyteller, with a rare combination of audacity and empathy. She won attention (and the Commonwealth Book Prize) with her first novel, Purple Hibiscus, a coming of age story about a fundamentalist Nigerian family. Her elegiac chronicle of the Biafran civil war, Half of a Yellow Sun, won the 2006 Orange Broadband Prize. In Americanah, a love story enlivened by spirals of irony, acute social commentary and sophisticated digital discourse, Adichie writes in vivid detail about the immigrant experience, about love and sex, hate and invisibility. She is merciless toward bigots, hypocrites and the corrupt “big men” of all countries. And she is compassionate toward individuals caught between worlds.

"Americanah, for me, is not just about leaving home but also about returning to that home, as the characters in the novel do,” she says. “There is a kind of migration that began with the credit crunch in the West, where young educated people from sub-Saharan African countries began to move back home because their job options could be better if they were lucky, and also because in many ways their hearts were there, their dreams were lodged there. I wanted to try and capture a sense of that movement.”

When Achebe himself spoke of passing the baton to a younger generation, he singled out Ben Okri. Born in Minna, Nigeria, in 1959, Okri lives in London and has published ten novels as well as poetry and short story collections. Foremost among them is his 1991 Man Booker Prize-winning novel, The Famished Road, which draws on Nigerian oral tradition and beliefs.

"In the beginning there was a river,” Okri writes. “The river became a road and the road branched out to the whole world. And because the road was once a river it was always hungry.” The narrator of The Famished Road is a spirit child or abiku – in Yoruba tradition a child caught in a cycle of early death and rebirth – named Azaro (derived from Lazarus).  Wise Azaro can see spirits in the mundane world. He watches as his father is transformed, gradually sensing the “mysterious forces” around him, finally understanding a profound enigma:  “We are living in a world of riddles.” 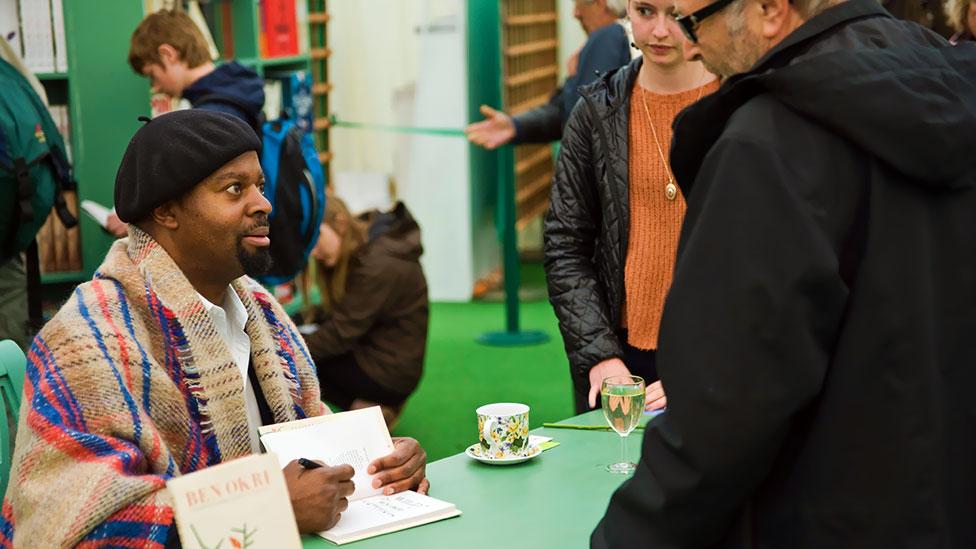 The Famished Road is similar to Gabriel García Márquez’s One Hundred Years of Solitude and Salman Rushdie’s Midnight’s Children, both masterful works of magical realism. When Achebe died, Okri said simply “The great man is gone.” Achebe’s sensitivity to the clash between old and new and his affinity for translating oral storytelling into written form is unimaginable without Achebe.

Chris Abani read Achebe’s The Arrow of God when he was in college in Nigeria – and it left a profound impact. “It’s an incredible novel,” he said. “It had a profound influence on me for the same things that drew me to Dostoevsky, Steinbeck, Orwell and Baldwin." Abani has published seven books of poetry and a string of novels and novellas that engage fluently with many literary traditions and forms, including 2014's noirish The Secret History of Las Vegas.

Abani’s novels share with Achebe a panoramic view that balances the personal and political, intimate and historical. And he tosses out images that lodge in the memory like dreams. His first poetry book, Kalakuta Republic, published in 2000, was inspired by his experience as a political prisoner between 1985 and 1991. A second novel GraceLand (2004) follows a young Elvis impersonator besotted with American pop culture who makes a night journey through the chaotic Lagos underworld. And his 2007 novella Song for Night is a poetic portrait of a 15-year-old child soldier whose vocal chords have been cut to render him mute as he clears minefields. 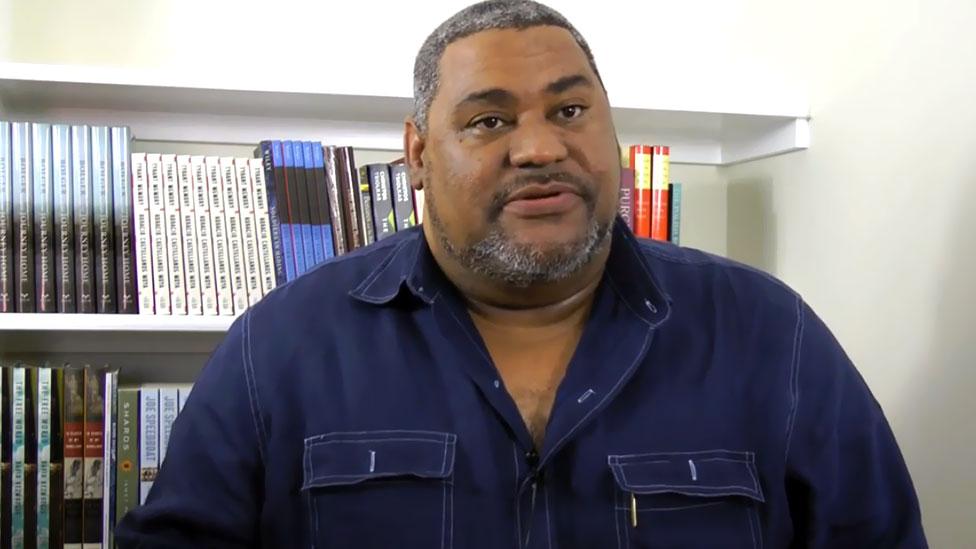 Abani presents his characters without judgment, inviting us to empathise with each one. “Because I grew up in Igboland my work is deeply influenced by that,” he says. “In my novels, the moral order is suspended. We are never sure who is the good guy or the bad guy. I leave that to my readers to figure out.” This approach, he added, comes from Igbo folktales. “The notion of simultaneity—things that coexist, evil and good, within the same person—is a very Igbo way of seeing the world.”

“At base,” Abani says. “Achebe’s generation made it possible for people like me to be writing.”

People sometimes think of the books writers leave behind as their claim to immortality, but on top of his wonderful words Achebe’s great legacy manifests itself in flesh and blood: writers like Adichie, Okri and Abani, whose literary imaginations he helped inspire. Sometimes things do fall apart, but Achebe’s life proves acts of artistic creation also can bring people and ideas together.