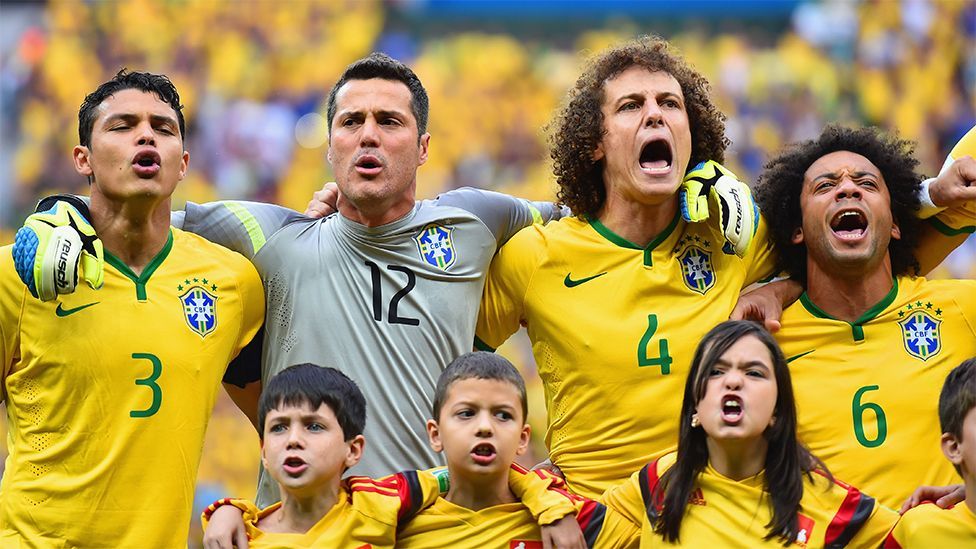 Ever since I was a child I’ve been spellbound by national anthems. Not because I’m fervently patriotic but because I come from a family of passionate football fans; combined with my love of music and my general fondness for anything a bit sentimental, that seems to have made my penchant for a good anthem inevitable. Plus, I’m married to a Welshman, and as anybody with even a passing familiarity with rugby knows, the Welsh take their beautiful national anthem very seriously indeed.

My experience with national anthems began early, when my two older brothers sat me down to watch Britain’s FA Cup Final when I was about five and we all sang along – with mostly made-up words – at the tops of our voices before kick-off. A decade later, during the European football championships in 1996, I was at Wembley to watch England thrash Holland 4-1. The football was fantastic, of course – what would we give to be able to beat Holland, or anyone, 4-1 these days? – but it was the experience of belting out the national anthem amid 80,000 people that really sticks in my mind.

In 2000 I was living in Paris on a year off before I went to university. Arsenal, my favourite football club, had many French players at the time, so I felt like France was my adopted national team. I even went to Rotterdam to watch France take on Italy in the final of the European Championships, and sang along with the red, blue and white half of the crowd to Le Marseillaise before kick-off. I found the whole thing deeply moving – no matter that there is not a single French bone in my body.

A decade after Paris, I was living in New York, where my husband was working at the United Nations. I’ll never forget the magical experience of piling into a flag-draped TV room at the iconic UN Building to watch World Cup games live from South Africa with dozens of UN employees from all around the world. I doubt anyone there did much real work during the course of the tournament, but I suspect it was a particularly golden time for international relations as diplomats of all nationalities bunked off to watch the football and toot vuvuzelas together. One of the most memorable aspects of that summer was hearing, at close hand, so many people from so many different countries singing their own national anthems at close quarters – from Ghana to Paraguay, Côte d’Ivoire to New Zealand. And of course, living in the US for four years, we heard a lot of renditions of the Star-Spangled Banner, a classic anthem I could never fail to sing along to, whether it be ironically as the Brit at fourth of July barbeques or rather more earnestly at baseball, a sport whose connection to the anthem is inextricable.

The anthems at the 2012 London Olympics were performed by members of the London Philharmonic Orchestra, and the man responsible for arranging all 205 of them was the composer and cellist Philip Sheppard. “There is definitely a national anthem formula”, he tells BBC Culture, “and it’s a westernised format, as if people have just gone through a Methodist hymnal and picked a march with dotted rhythms, often in B-flat major and a clichéd trumpet tune. It’s the anthems that are anomalous to that which tend to be brilliant. Songs that come up from the street, rather than being imposed by the state, can be kind of magical and genuinely stirring.”

My adopted anthem Le Marseillaise is one such example, Sheppard says. “That comes from a genuine place and a genuine motivation – it’s a revolutionary piece by the French people. It’s the opposite of the anthems that are consciously commissioned by a state, and which rather blend one into another, so you get this weird situation in which a central African state’s anthem [like Cameroon’s] sounds just like one from eastern Europe.”

Sheppard reckons anthems are hard to judge from an objective musical standpoint. “The reason so many anthems are marching tunes is because that’s often a reason for it existing: it is literally something to rally people behind,” Sheppard points out. “So, like a flag, it becomes an instrument of the state. And it’s potentially dynamite: you mess with an anthem at your peril, because people will live and die for them. So you can have a social opinion, but you can’t put a value judgement on an anthem. It would be like having an opinion about oxygen. This might be the lifeblood of someone’s nation, so who’s to say if it has musical merit?”

For this reason, Sheppard – who received death threats in 2012 after an online article listing ‘the 10 worst anthems’ in which he was quoted went viral– will not mention the national tunes he doesn’t rate. But when I ask him to name some of his favourites, he mentions Russia’s: “I love it. Putin restored the old Soviet anthem from the [1940s] and it’s a stunning piece of music. It sounds like a workers revolutionary song but it’s got a scrunchiness to the harmony that makes it so beautiful. He also praises Brazil’s, which he says “perfectly fits the social mood of that country, which in my experience tends to have 50% more active energy than anywhere else on earth!”

The World Cup’s host nation aside, Sheppard is a fan of many of the Latin American national anthems. “You have this Italianate opera tradition in South America,” he explains. “Many of their anthems wouldn’t sound out of place in La Scala; they’re fabulous. It’s like Verdi all the way and it works tremendously for sporting events. You hear those anthems, Brazil, Bolivia [and] Uruguay, you’re up on your feet!” “Uruguay?” I shriek at him in horror, but Sheppard can’t help but concede that, despite how they knocked out England from the World Cup in the quickest time in history, he’s a fan. “Their anthem is six minutes, 50 seconds long and it has about six different tunes inside, it’s like an entire overture in the Verdi style!” he laughs. “So I’m afraid they win, not just on football terms but on anthems too…”

It was announced recently that the great opera singer Placido Domingo will perform before the World Cup final on 11 July. “I always think music and sport are the two great things many people can understand without any need to really speak the language,” the 73-year-old legend said when asked why he wanted to be involved. Sheppard – like me – agrees whole-heartedly, “It’s social glue!” he enthuses. “Music and sport are the two great uniters of the world.”