Loading
State of the Art | Art history
Vermeer’s Girl with a Pearl Earring: Who was she?
Share using EmailShare on TwitterShare on FacebookShare on Linkedin 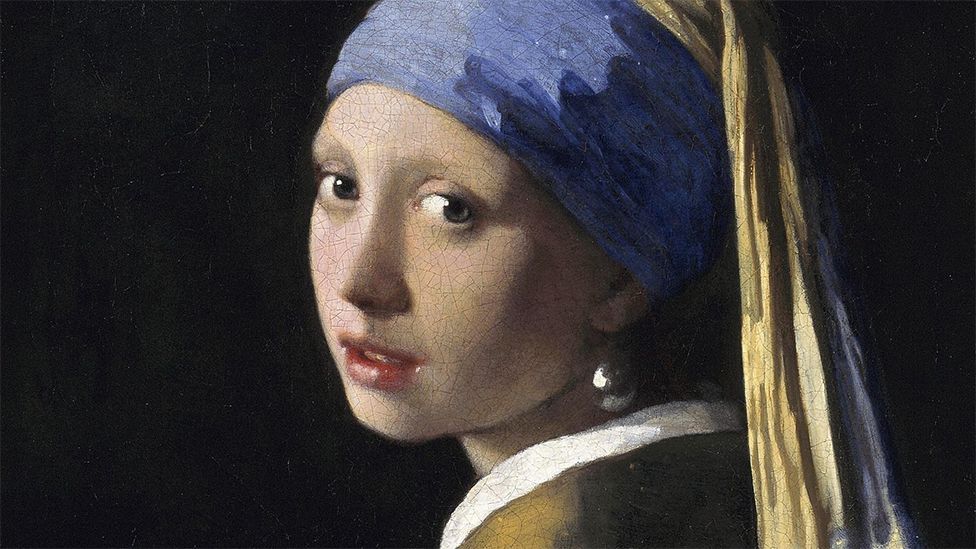 By Alastair Sooke 21st October 2014
As Vermeer’s Girl with a Pearl Earring returns home to The Hague, Alastair Sooke delves into the story of the mysterious painting – and its enigmatic creator.
S

Swivelling to her left, she glances suddenly in our direction, her soft face as luminous as the moon in the night sky. She wears a voluptuous blue and yellow turban on her head, while an improbably plump pearl hangs from her earlobe. A speck of bright moisture adorns the corner of her mouth, which is open as though she is about to speak. Her words, though, remain a mystery.

Seductive yet silent, this exquisite nameless creature is known simply as the ‘Girl with a Pearl Earring’. The inspiration for a bestselling historical novel by Tracy Chevalier, which in turn was adapted into a 2003 film starring Scarlett Johansson, she was painted around 1665 by Johannes Vermeer, one of the masters of the art of the Dutch Golden Age.

For the past two years, Vermeer’s masterpiece has been travelling the world, visiting Tokyo, Kobe, San Francisco, New York, Atlanta and Bologna as part of a touring exhibition showcasing the holdings of the Mauritshuis Royal Picture Gallery in The Hague, where the picture has been part of the permanent collection since 1903. The occasion for this exhibition was the €30m ($41m) renovation of the Mauritshuis, which boasts one of the finest collections of Dutch paintings anywhere in the world and has recently reopened to the public.

Wherever she went, Vermeer’s Girl drew crowds that would turn a movie star green with envy. When she appeared in Tokyo, for instance, she attracted more visitors than any other global exhibition that year. In total, more than 2.2 million people around the world turned out to pay homage to Vermeer’s vision, who has been described as ‘the Mona Lisa of the North’.

Now that she has returned safely home to The Hague, and is once again in the news as the pin-up of the Mauritshuis, it is a timely opportunity to find out more about this enigmatic beauty. For one thing, who was she? And why has she been so successful at capturing our hearts?

The truth is that despite frenzied speculation (was she the artist’s daughter, or perhaps his mistress?), we will probably never know the identity of the model for Vermeer’s Girl – if there even was one. Vermeer, himself, is a shadowy figure in the history of art. Once nicknamed “the sphinx of Delft”, his native town which he never left, he produced little – only around three dozen paintings are today agreed to be by him. He also left behind few biographical traces, though we do know that his wife bore him 15 children.

He is recognised as a master of light who specialised in painting women in sparse domestic interiors, and his pictures are prized in part because they are often suffused with mystery. Unlike some of his Dutch contemporaries, who crammed their compositions full of material objects and narrative detail, Vermeer got a kick out of teasing the viewer and withholding meaning. In one of his canvases, for instance, an elegant couple is engaged in a music lesson – but is the gentleman her tutor, a suitor, or her lover? We will never know.

As for his Girl, well, she is even more perplexing. As Emilie Gordenker, the director of the Mauritshuis, told me recently, 17th-Century viewers would have looked at Vermeer’s painting and seen not a portrait but a type of picture known as a ‘tronie’. “A ‘tronie’ is a study of a head and shoulders dressed in exotic clothing,” she explains. The giveaway is the turban: it lends an oriental flavour to the canvas, transporting viewers to a faraway realm of the imagination. “While it is possible that someone modelled for it,” Gordenker says, “just as Rubens often painted figures who looked like his wife, it isn’t meant to be a specific person, but someone more generalised, timeless and mysterious – perhaps a sibyl or a figure from the Bible.” Moreover, according to one theory, the impossible pearl, which is too big to be worn in reality, was meant to be understood as a piece of costume jewellery – so adding to the general atmosphere of artifice and make-believe.

For Gordenker, this “sense of mystery” is what attracts people to the Girl. “Partly, she’s just gorgeous – that’s easy,” she says. “But the composition is also very clever. Out of that dark background, she pops into our space looking very much alive – and the gesture is a big part of that. Her mouth is open, which you don’t see that much in Dutch paintings, so she seems as if she is about to talk to you. I’m dying to know what she’s going to say. And around the world – in Japan, in the United States, in Italy – everybody has the same reaction: you can see them trying to fill in the story.”

“The image works because it is unresolved,” agrees Tracy Chevalier, whose novel about the painting has sold more than three million copies. “You can’t ever answer the question of what she’s thinking or how she’s feeling. If it were resolved, then you’d move onto the next painting. But it isn’t, so you turn back to it again and again, trying to unlock that mystery. That’s what all masterpieces do: we long to understand them, but we never will.”

The curious thing, though, is that it hasn’t always been this way. A hundred years ago, visitors to the Mauritshuis were more eager to see Paulus Potter’s gargantuan canvas The Bull (1647), which, with its massive, mud-spattered bovine protagonist, was prized as the last word in Dutch naturalism. Back then Vermeer’s Girl was more wallflower than superstar. 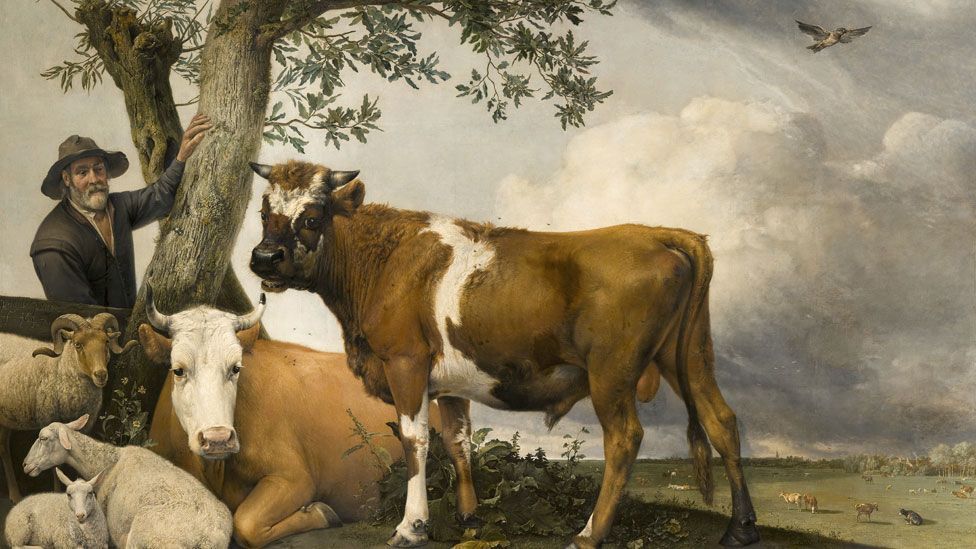 The painting had come up for auction in The Hague in 1881. “It was very filthy, and only two people realised what it was – a prominent art critic and a collector,” Gordenker explains. Since they were friends, the two men agreed not to bid against each other. As a result, the collector, Arnoldus des Tombe, managed to buy it for the minuscule sum of two guiders and 30 cents – “a real bargain”. “Then, in 1903, Des Tombe left it to the Mauritshuis as a surprise in his will,” Gordenker continues.

Today it seems incredible that people failed to spot the quality of the picture. Famously, Vermeer created the illusion of the pearl against a patch of dark grey with just two bravura white brushstrokes: a bright highlight on the front, capturing light coming in from the window, and a subtler one lower down, showing the reflection of the girl’s collar. The year the painting appeared at auction, though, in 1881, was only a decade or so after Vermeer’s “rediscovery” by the French. Following the artist’s death in 1675, he had languished in obscurity for two centuries.

Art history can be fickle – this isn’t so surprising. But just as Vermeer’s fortunes changed, so his Girl experienced a surge in popularity towards the end of the 20th Century. The turning point was the blockbuster Vermeer exhibition that opened at the National Gallery of Art in Washington in 1995. The Girl was chosen as the image for the accompanying poster – and her celebrity status was assured. As Gordenker explains: “There is something interesting about this painting: it reproduces extremely well. And we live in an age of reproduction. It catapulted her to fame.”

“She makes the perfect poster,” agrees Chevalier. “The colours, the light, the simplicity of the image, that direct gaze: a lot of Vermeer’s paintings are people not looking at us, in their own world, but she draws us in. In that way she’s very modern. When you think about the Mona Lisa, she is also looking at us, but she isn’t engaging – she’s sitting back in the painting, self-contained. Whereas Girl with a Pearl Earring is right there – there is nothing between her and us. She has this magical quality of being incredibly open and yet mysterious at the same time – and that is what makes her so appealing.”