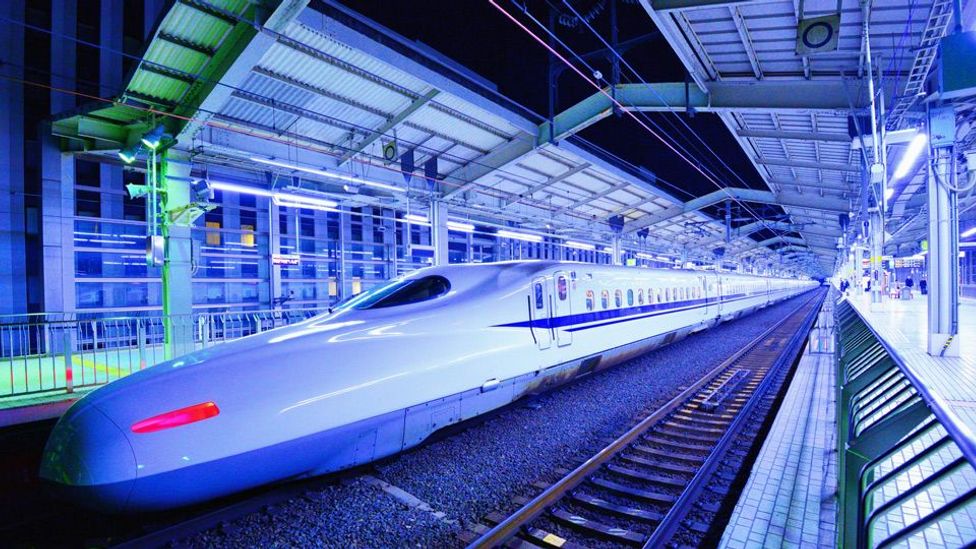 By Jonathan Glancey 15th July 2014
Fifty years ago this year, the first Shinkansen bullet train shot out of a station platform in Tokyo. Jonathan Glancey salutes a classic of design that created the blueprint for railway travel around the world.
N

Nine days before he declared the 1964 Tokyo Olympics open, Emperor Hirohito presided over a ceremony that witnessed the first white-and-blue ‘bullet’ train streaking from the Japanese capital at 210km/h (130mph) past Mount Fuji and on to Osaka in record time. Sprinting along a brand new, dedicated high-speed passenger track, featuring the fewest possible curves and shooting through 67 miles (108km) of tunnel and over 3,000 bridges, this was no one-off exercise to publicise the international games. The Tokaido Shinkansen (-New Trunk Line’) would become not just the world’s fastest and most advanced, but also its most intensely used main line railway.

Today, the latest, snake-like, 16-car Shinkansen trains leave Tokyo for Osaka up to every three minutes, each offering comfortable seats for 1,323 passengers and cruising at 270km/h (168mph). From last year, trains on the Tohuku Shinkansen, one of the six high-speed lines opened over the past fifty years, scythe through sections of Japan’s mountainous landscape at 320km/h (199mph). Japan’s renowned bullet trains have made domestic flying all but redundant between major cities. Not only are they very fast, frequent, spotlessly clean and on time to the second, but their carbon footprint is 16% that of cars making the same journeys according to the Japan Railway and Transport review. And since Hirohito waved that first train away from Tokyo in 1964, there have been no fatalities on the network. In 50 years, two trains have been derailed, one during an earthquake in 2004, another in a blizzard last year, yet the Shinkansen’s safety record has remained unimpaired. 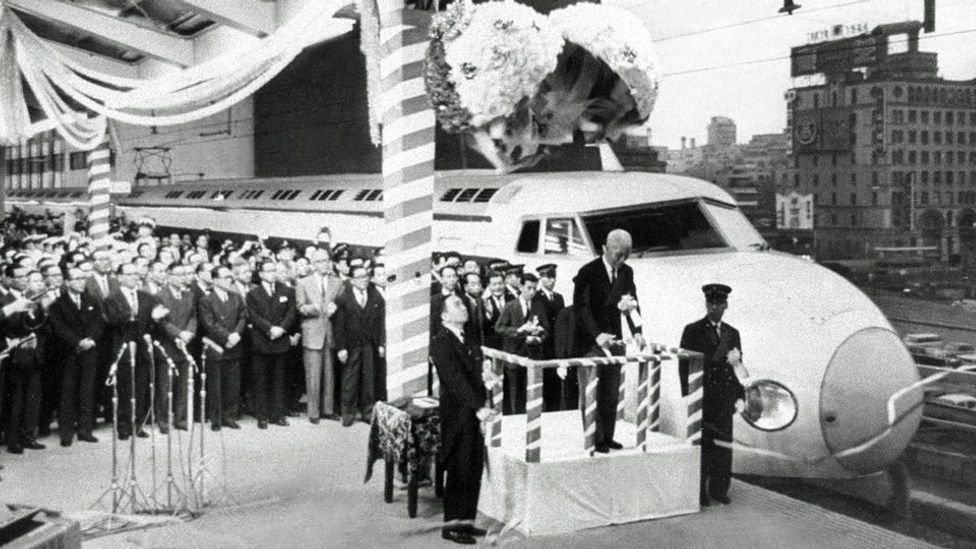 Shinkansen made every other main line railway seem old-fashioned when the first line opened on 1 October 1964, at the height of Beatlemania and when the fastest British trains could manage 100mph (160km/h) over short sections of upgraded Victorian lines. Japan’s bullet trains – named after the distinctive streamlined nosecones of the first O-series Shinkansen – set the pace for France’s TGVs, Germany’s ICEs and Italy’s Pendolinos, although these were not to appear for many years.

Japan had stolen a march in railway technology that was part and parcel of its remarkable economic and cultural revival during the 20 years following its political and military collapse in 1945. Then the very same Emperor Hirohito who declared Shinkansen and the 1964 Olympics open had addressed the nation over the radio – it was the first time people had heard his voice – to announce, after the dropping of Atomic bombs on Hiroshima and Nagasaki, that “the war situation has developed not necessarily to Japan’s advantage.”

Visitors to the 1964 Olympics discovered a re-energised country and a compelling culture, sporting radical new architecture, motorways, motorbikes, cinema, cameras and so much else alongside the spectacular and world-beating trains. Japan became intensely fashionable again, with musicians from Ella Fitzgerald to The Beatles soon on their way to Tokyo. And, yet, these remarkable achievements and world-leading new designs were presented as part of Japan’s venerable and highly distinctive culture. Publicity shots for the Tokaido Shinkansen depicted the mercurial trains fleeting through landscapes adorned by cherry blossom as well as snow-capped peaks. It was a heady and thrilling fusion of old, imperial and new, democratic worlds. 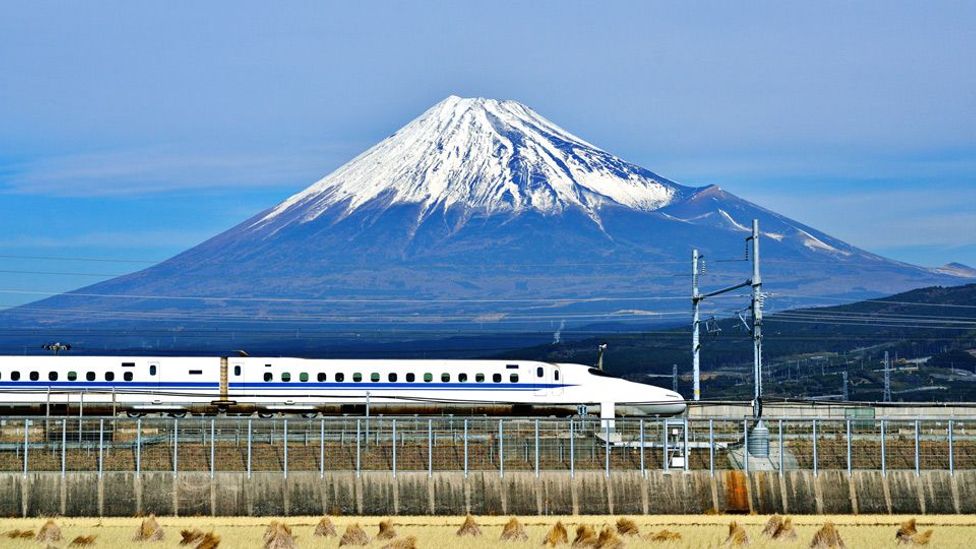 Not surprisingly, the first ‘New Trunk Line’ was expensive. In fact, costs overran by up to 100% and both the president of the Japanese National Railway, Shinji Sojo, and his chief engineer, Hideo Shima, were forced to resign. Neither was invited to the opening of the magnificent railway they had created.

Their great adventure, and financial gamble, had begun in 1959 when Shima was invited to design and engineer the new railway, its trains and services. Shima and his team came up with the idea of a brand new express railway that would run on elevated, motorway-style viaducts where necessary to keep gradients as even as possible. Curves were kept to a minimum. Older trains would not be allowed to share the line. In any case, Japan’s existing trains ran on narrower tracks compared to those of Shinkansen, which adopted the standard European and American gauge of 4ft 8.5 in (1.4m), allowing for greater stability and higher speeds.

Shima’s first railway designs had been for Japan’s last generation of main-line steam locomotives and one of his handsome models set Japan’s steam speed recordin 1954. Progress over the next decade was very rapid indeed. And, although Shima was disgraced on grounds of cost overruns, he went on to become head of Japan’s National Space Development Agency – from steam to outer space in two decades. – Today, he is revered as the father of Shinkansen and the high-speed electric express trains his railway spawned worldwide.

Since it opened fifty years ago, the original Tokaido Shinkansen has carried more than 5.5 billion passengers while the trains themselves have become ever more impressive and radical. With their hugely long nosecones, hidden wheels and lustrous green or blue paintwork, the latest E5 and E6-series trains are astonishing-looking things. Resembling mechanical eels from some distant planet, their performance is as sensational as their appearance. Slithering away from stations, they can reach 270km/h (168mph) in three minutes, cruising over certain sections of line at 320km/h (199mph). Inside, they are smooth, quiet and vibration free. They boast  impressive and very clean lavatories (as does most of Japan), reclining seats that always face forwards and hostesses bringing drinks and bento boxes. Staff are impeccably dressed. Manners matter, and are maintained. 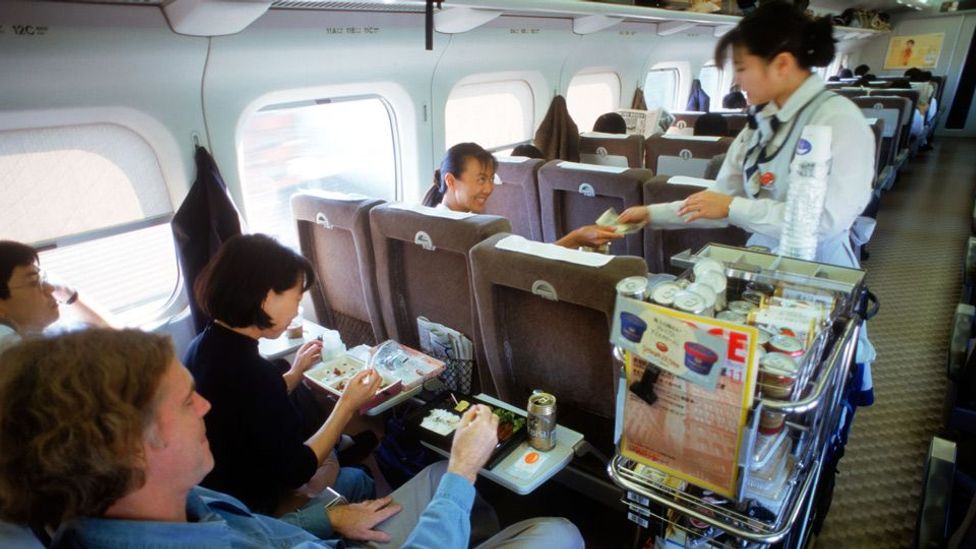 The impeccable, unshaken onboard service on a Shinkansen bullet train (Chad Ehlers/Alamy)

The elongated noses of the E5 and E6-series help not just to increase speed, but also to reduce the perceived noise of the trains from the trackside and, especially, as they emerge from tunnels: ‘tunnel boom’ has been a cause of concern for those living close to Shinkansen tracks. Meanwhile, inside their air-conditioned cabs, white-gloved drivers maintain pin-point-accurate timing.

The Shinkansen network continues to grow. The latest generation of bullet trains, currently confined to the south islands of Honshu and Kyushu, will run onto the north island of Hokkaido through a tunnel under the sea in 2016, going on to reach Sapporo by 2035. By then, however, the first section of the new Chuo Shinkansen that will eventually shoot from Tokyo to Osaka should be open. This is the Maglev – magnetic levitation – railway that will see trains, hovering above their tracks, propelled between Tokyo and Osaka in little more than an hour. That’s at 500km/h (311mph), or more than twice the speed of the original bullet trains.

To have designed and built a wholly new national rail network boasting trains capable of maintaining 320km/h while running as frequently as London Underground trains – and much more cleanly and reliably – is a remarkable achievement by any standards. Whatever the ups and downs of its economy since 1964, Shinkansen was the standard bearer for a new Japan that – whether in the guise of stylish SLR cameras,  radios, hi-fi equipment, cars, motorbikes, film, comic book art and fashion – was to take the world subtly by storm from the time of the ’64 Olympics. The mesmerising sight of a scintillating Shinkansen bullet flying at full tilt through cherry blossom and those snow-clad peaks remains as thrilling today as it must have been half a century ago.