Loading
Television
Twin Peaks: What made it so good?
Share using EmailShare on TwitterShare on FacebookShare on LinkedinShare on Whatsapp 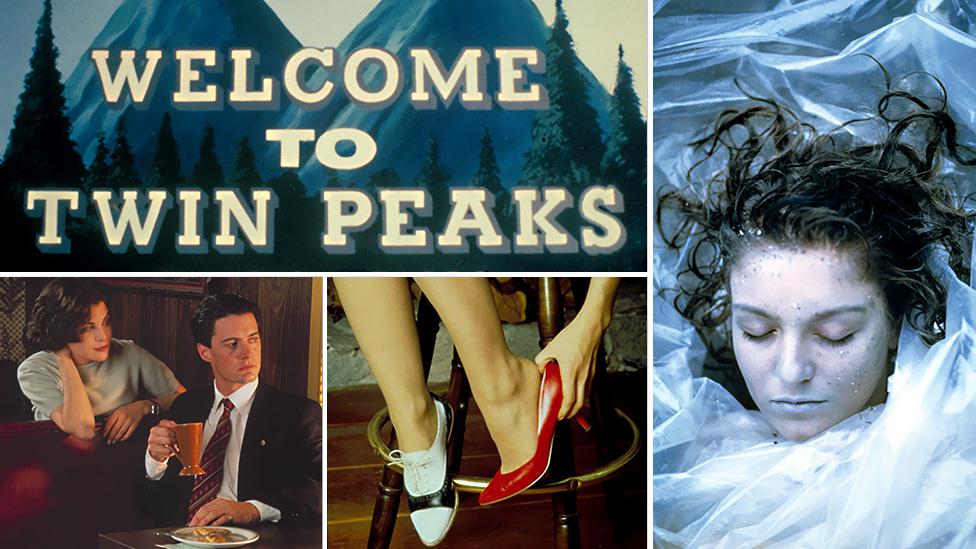 Twin Peaks expresses a vision of America filtered through the genre tropes of Hollywood film and TV storytelling – with a dash of Edward Hopper and Norman Rockwell. It gives us such mom-and-pop locales as the Double R Diner, Big Ed’s Gas Farm, the Roadhouse and the Great Northern Lodge, which are populated by all-American archetypes like the noble sheriff, the bumbling deputy, the cunning FBI man, the biker dude, the jock, the corrupt businessman, and the perky waitress – people who work for a living and enjoy simple pleasures. Like the white picket fence in the opening shot of Blue Velvet, these are idealised icons of American life – even if it’s a way of life that has never existed. 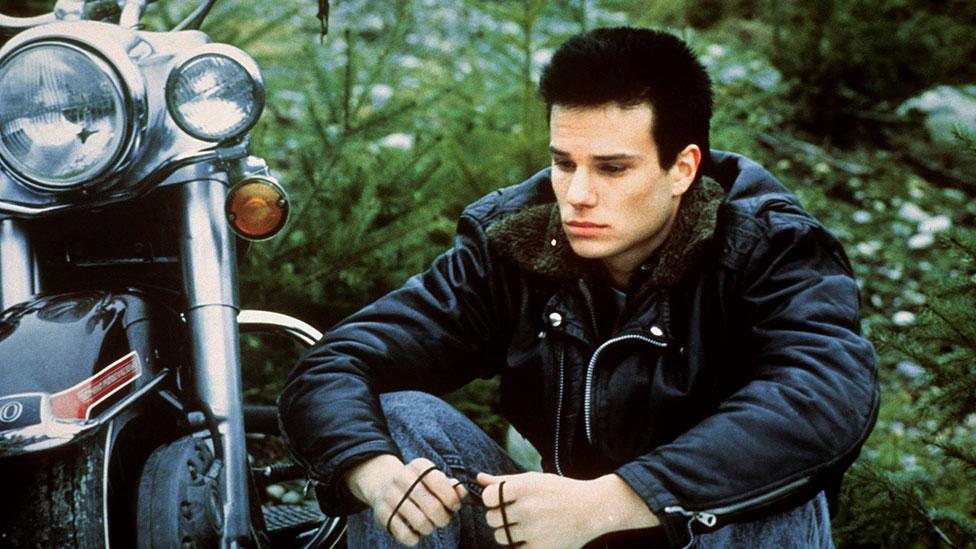 Twin Peaks is filled with all-American archetypes, such as the biker (AF archive / Alamy)

It’s hard to imagine Twin Peaks without its soundtrack: from Laura’s theme – ominous bass chords that segue into a poignant sickly-sweet melody – and the deceptively soothing Twin Peaks theme, to the coquettish woodwind and brushed drums of Audrey’s Dance. And for composer Angelo Badalamenti, who collaborated with Lynch on several feature films including Blue Velvet and Mulholland Drive, it is still the work for which he’s best known. In a BBC Four documentary, The Sound of Cinema: The Music that Made the Movies,  film music expert Neil Brand describes Angelo Badalamenti’s music as “the sound of Lynch’s world.” In this clip, Badalamenti explains how he created the iconic Twin Peaks theme in a single session – while Lynch egged him on.

David Lynch recently described Twin Peaks as a “soap opera”, reflecting the melodramatic fictional serial, An Invitation to Love, that has its characters hooked. And just like a conventional soap, in Twin Peaks, nobody is sleeping with who they should. Romance – and adultery – abound, from sleezy hotelier Benjamin Horne and the lascivious Catherine Martell, to the honest gas station owner Ed and the diner’s doe-eyed Norma. From behind Laura Palmer’s wholesome façade, all sorts of sexual transgressions are revealed. And the existence of the high-end brothel, One Eyed Jack’s – where high-school girls double as prostitutes – reveals a shadowy underside to Twin Peaks’ cheery small-town image. The show oozes sex appeal and glamour – from the retro aesthetics of the sets and costumes to the beautiful cast. Special mention must go to the feline charms of Audrey Horne – played to slinky perfection by Sherilyn Fenn, who reached cult status with her slow dancing – and the ability to tie a knot in a cherry stalk with her tongue. 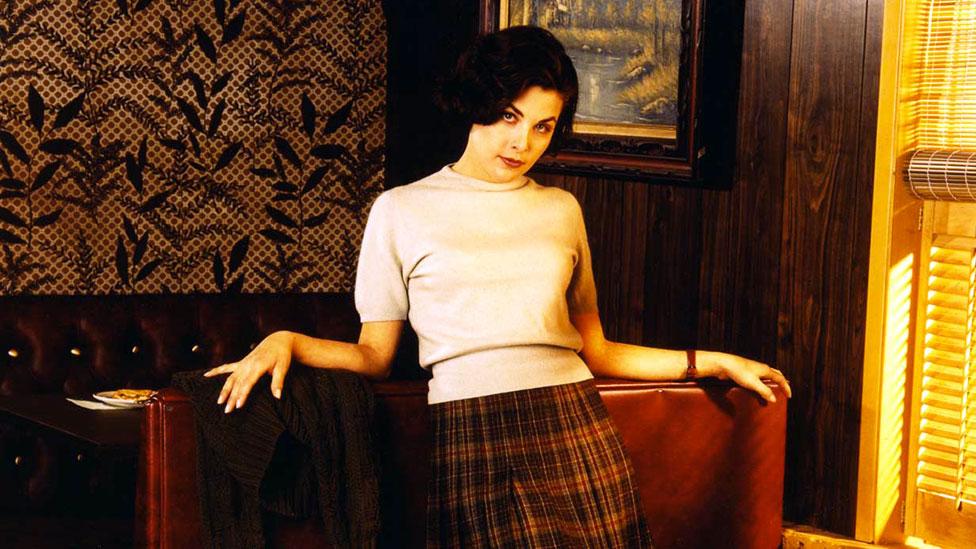 “One day my log will have something to say about this. My log saw something that night.” The visionary log  – and its owner and conduit, the Log Lady – play a kind of soothsayer role. They appear episodically to utter eerie bon mots, like some sort of timber Greek chorus. Logs, trees and lumberjacks and are integral to Twin Peaks’ atmosphere – and are a particular concern of the show’s creator, David Lynch. Wood plays a dual symbolic role – on one hand, the foreboding evil of ‘the woods’, on the other, signalling goodness and virtue. Lynch offered a short homage to wood in a speech recently. “Much happiness can come from observing a tree,” he said, “and the same can be said about observing the many shapes fashioned out of wood. Quite often when we are talking about beauty, we are talking about wood.” 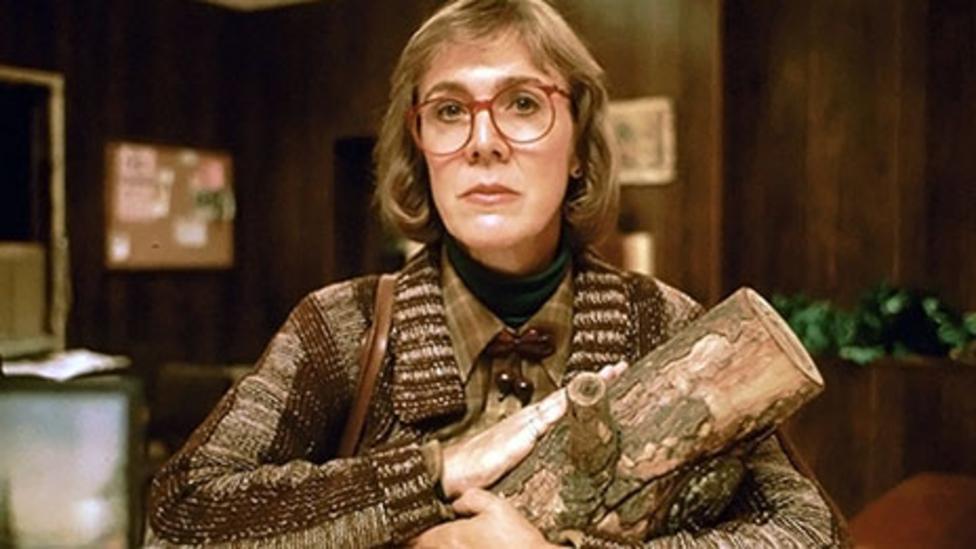 “Harry, I’m going to let you in on a little secret. Every day, once a day, give yourself a present. Don’t plan it, don’t wait for it. Just let it happen. It could be a new shirt at the men’s store, a catnap in your office chair, or two cups of hot, black coffee.” Coffee – and to a slightly lesser extent, pie (cherry and huckleberry) – are the twin culinary fascinations of FBI Agent Dale Cooper. Cups of Joe and pie are mentioned so frequently, there’s even a ‘coffee and pie’ edit on YouTube that cuts together every bite and sip. With a knowing nod to the classic cop fixation, the Twin Peaks police station overflows with donuts – and numerous characters sing the praises of delicious home comforts, from the simple delights of pie to the joys of a baguette with brie and butter. 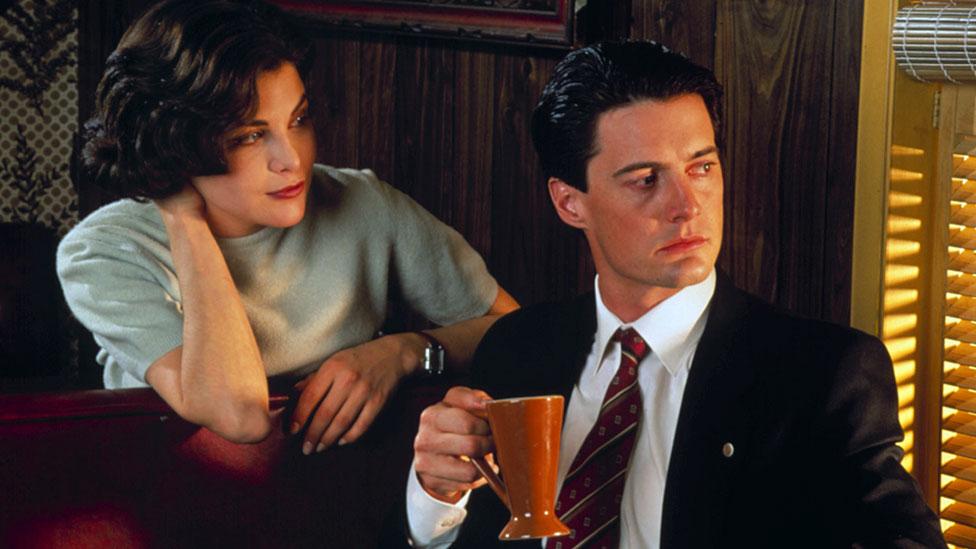 The motif of the doppelganger runs through the series and reflects David Lynch’s Manichean view of a world as divided between good and evil. There’s the good man Leland Palmer who is corrupted by the evil side of his personality, Bob, who may really be a demonic spirit. And there’s the ‘good guy’ biker and the ‘bad guy’ athlete, the good FBI agent in Dale Cooper and his evil double in Windom Earle. Laura Palmer even had her own doppelganger in her near-identical cousin Maddy (both played by Sheryl Lee). And almost every character in Twin Peaks is leading a ‘double life’.

In the first episode of Twin Peaks, when Laura Palmer’s body is found, another girl is discovered wandering along railroad tracks in a fugue state. From that moment on, the characters are never entirely lucid, dipping in and out of reveries involving giants, dwarves or one-armed men. The unconscious is constantly bubbling over in Lynch’s films, from Mulholland Drive’s shifting realities to the fractured identities of Lost Highway – he has described Blue Velvet as "a dream of strange desires wrapped inside a mystery story". The American dream too, takes a nightmarish turn with the discovery of a severed ear amid Blue Velvet’s suburban picket fences, or the cocaine addict prom queen of Twin Peaks. Only the diner offers escape. As Lynch told The Guardian: “I used to go to well-lit diners, because in a well-lit diner I could sit and think and daydream and I could go to dark places knowing that I could surface in a well-lit, safe place.” 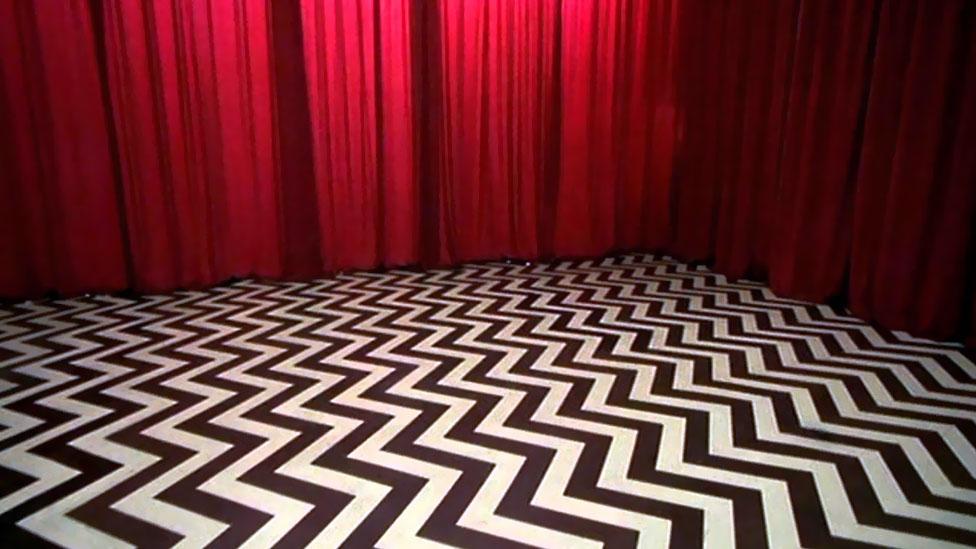 Twin Peaks is a peek behind the veil of respectability that characterises small-town life, and drapes feature prominently throughout: Laura Palmer’s body is wrapped in a shower curtain, and the one-eyed Nadine Hurley is obsessed with inventing a “silent drape runner”. The most striking drapes in town have to be the curtains in the Red Room, lit up by strobes behind a dancing dwarf. The red curtain often crops up in Lynch’s works, and has rich meaning for the director. “Curtains are both hiding and revealing,” he says. “Sometimes it's so beautiful that they're hiding; it gets your imagination going. But in the theatre, when the curtains open, you have this fantastic euphoria that you're going to see something new, something will be revealed.” In the Red Room, where spirits journey towards perfection, the curtain marks the divide between the dream world and the real.