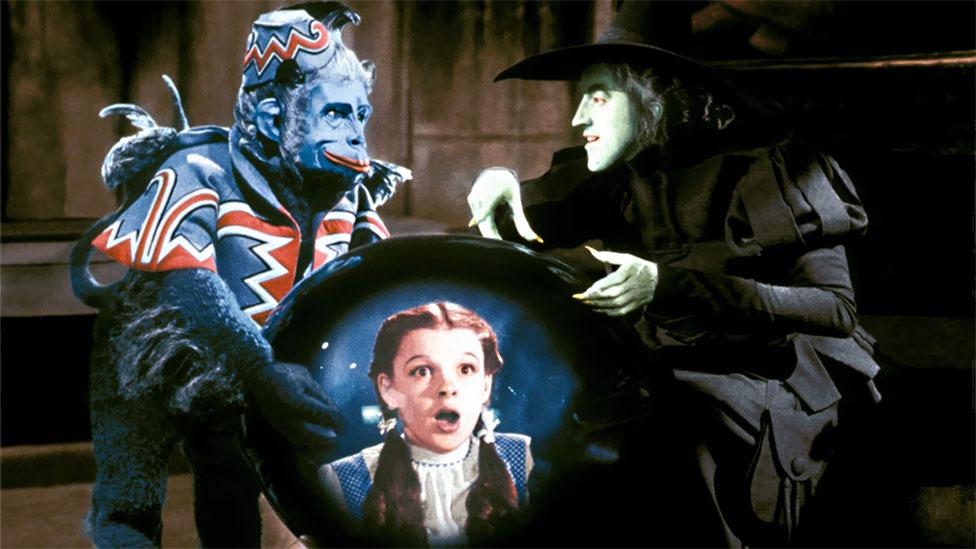 The classic film was first shown 75 years ago. Since then, there have been many interpretations, from religious allegory to an acid trip. BBC Culture picks out five of the most interesting readings of L Frank Baum’s modern fairy tale.
P

Historian Henry M Littlefield’s essay on The Wonderful Wizard of Oz was published in 1964. In this reading – snappily entitled a ‘parable on Populism’ – the Yellow Brick Road represents the gold standard, and the Wicked Witch of the East stands for industrialists and bankers on the US east coast who control the people (the Munchkins). In his essay, Littlefield writes, “The Wizard of Oz has neither the mature religious appeal of a Pilgrim’s Progress, nor the philosophic depth of a Candide… Yet the original Oz book conceals an unsuspected depth.”  The rusted Tin Man, stuck in the same position for a year before Dorothy oils his joints, has parallels with US industry after the depression of 1893; the Scarecrow reflects the Kansas farmer as viewed by outsiders, needing a brain to replace the straw in his head; the Cowardly Lion is William Jennings Bryan, who campaigned to be US president at the turn of the 20th Century and advocated a standard of both silver and gold to replace the gold standard (in Baum’s book, Dorothy’s slippers are silver, not ruby). Littlefield sets his reading against the backdrop of the late 19th Century debate over US monetary policy; in subsequent interpretations, the Emerald City symbolises ‘greenback’ paper money that has no real value, instead obtaining its value from a shared illusion.

While scholars have questioned whether Baum ever intended his story to be satire, historians like Quentin Taylor still find enough parallels to argue that the book is a deliberate work of political symbolism. According to Taylor, “Quite simply, Oz operates on two levels, one literal and puerile, the other symbolic and political.”

While Henry M Littlefield was keen to dismiss any comparisons with The Pilgrim’s Progress, church pastors would beg to differ. Christian sermons have discussed The Wizard of Oz’s Biblical meanings, comparing Dorothy’s song Over The Rainbow to the end of the tale of Noahfrom the book of Genesis, or claiming that the Emerald City represents “the heavenly city, the new Jerusalem”. One minister in a Florida megachurch developed a month-long series of Wizard of Oz-themed homilies, featuring a musical performance of Kanye West’s single Heartless by a Tin Man.

While some praise The Wizard of Oz for its spiritual insight, others have criticised it for ‘moral turpitude’. From the moment Baum’s book was published in 1900, ministers attacked it for its ungodly influence: in 1986, seven fundamentalist Christian families in Tennessee filed a lawsuit against the novel’s inclusion in the public school syllabus, arguing that it promotes the belief that human attributes are “individually developed rather than God given”. The group claimed that it is “theologically impossible” for a good witch to exist, with one parent saying: “I do not want my children seduced into godless supernaturalism”. Southern Baptists Jerry Falwell and Pat Robertson attempted to ban the film’s broadcast on TV in 2004. Robertson claimed, “the Almighty told me that flying monkeys and witches are an affront to all good Christians.”

As editor of the Aberdeen Saturday Pioneer in South Dakota from 1890 to 1891, L Frank Baum endorsed women’s suffrage and published political tracts written by his mother-in-law, the radical suffragette Matilda Joslyn Gage. A theosophist, she had posited a theory that an earlier history of matriarchy had been suppressed; she also viewed the demonisation of witches as a way to devalue women. It has been suggested that the character of Dorothy is based on Gage – while traditional fairy tales portrayed females as passive characters waiting to be rescued, Dorothy fends for herself and helps the male characters she meets.

“The Wizard of Oz is now almost universally acknowledged to be the earliest truly feminist American children’s book, because of spunky and tenacious Dorothy,” wrote the American literary scholar Michael Patrick Hearn in the foreword to The Annotated Wizard of Oz. “Homely little Dorothy refreshingly goes out and solves her problem herself rather than waiting patiently like a beautiful heroine in a European fairy tale for someone else, whether prince or commoner, to put things right.” The character who is supposed to save her, the Wizard, turns out to be a fake, while the true ruler of Oz is the female Ozma. As Hearn told the BBC, “Dorothy is the first feminist role model.”

Theosophists seek to understand the mysteries of the universe, finding the common roots of all religions to uncover a secret universal doctrine. In 1890, Baum wrote a series of articles praising the quasi-religious movement; in 1892 he joined the Theosophical Society of Chicago. According to an occult reading of The Wizard of Oz, the Yellow Brick Road is viewed as the ‘Golden Path’ in Buddhism, along which the soul travels to illumination. The cyclone represents the theosophical belief in reincarnation, as a soul goes through a cycle of physical births and deaths before it becomes divine; the outwardly expanding spiral where the Yellow Brick Road starts has meaning in occult symbolism, representing the soul moving from the material realm to the spirit world.

Dorothy’s silver shoes are seen as Baum’s version of a ‘silver cord’ that connects our physical bodies with our astral bodies, and the Wizard symbolises the God figure of organised religions, a charlatan keeping the masses in spiritual darkness. Some, however, have argued that Baum focused more on the psychological elements of theosophy, particularly its emphasis on positive thinking: in his foreword to a 1991 edition of The Wonderful Wizard of Oz, the historian William R Leach argued that the book met “the particular ethical and emotional needs of people living in a new urban, industrial society. The Wizard of Oz was an optimistic secular therapeutic text: it helped make people feel at home in America’s new industrial economy.”

With its flying monkeys and Technicolor fantasy, The Wizard of Oz has long been celebrated as a psychedelic odyssey and an influence on the counterculture movement of the 1960s. Comedian Peter Bergman – who in 1967 organised the first ‘love-in’ – hosted a radio show called Radio Free Oz in which he played the character of the Wizard, and decades after his LSD-fuelled bus trip across the US, writer Ken Kesey created a play called Twister, loosely based on Baum’s story; it was released as a film in 1999. Many fans have interpreted Dorothy’s adventure as an acid trip, with blogger Erich Kuersten arguing that the film “remains a common way to describe the effects to people who’ve never tried it”.

The Wicked Witch of the West puts a field of poppies in the path of Dorothy and her companions, sending Dorothy into an opium-induced sleep. In the book, she is carried away by the Tin Man and the Scarecrow, but in the movie she is awoken by the good witch Glinda sprinkling her with snow, a slang term for cocaine. The scene is still referenced today – in a recent interview, drag queen RuPaul tearily recalled “That part in The Wizard of Oz when they go into the poppy fields. Sorry, I choke up when I think about this… the Lion and Dorothy and Toto fall asleep and the Tin Man, who’s immune to the poppy — which is heroin — says, ‘Wake up! Wake up! You’re falling asleep!’”

Film
1The Giver: Dark future vision
In Focus
2Robin Williams: Art out of agony
The Reel World
3China’s Sex and the City?
Film
4Marion Cotillard’s finest role?
Around the BBC