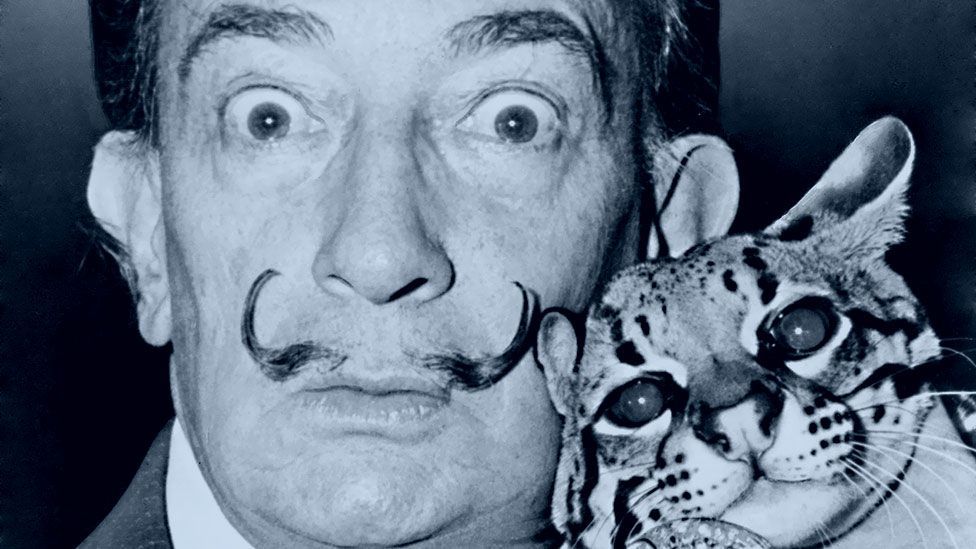 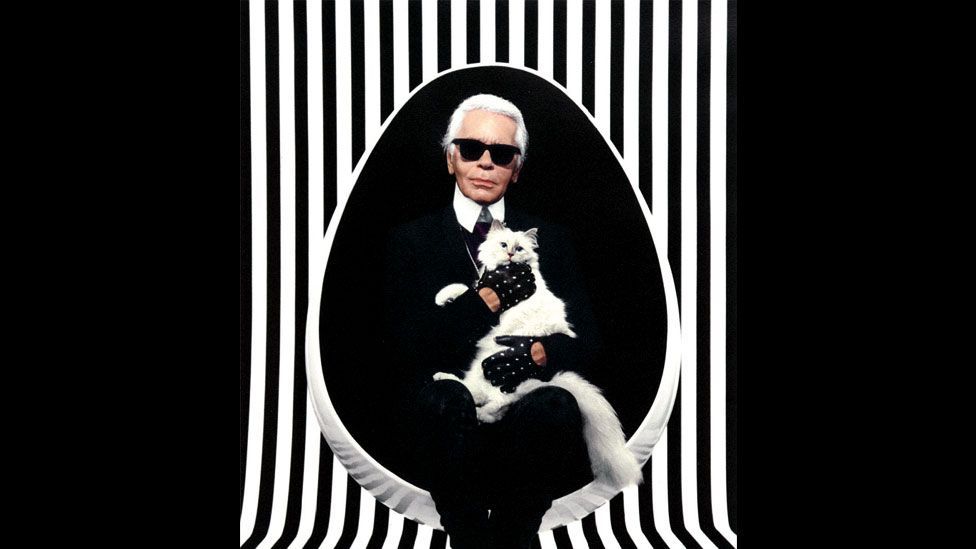 “I never thought I would fall in love like this with a cat.” Over the past three years, the famously unsmiling Chanel creative director Karl Lagerfeld has developed an obsession with a cat called Choupette. Given to him by the model Baptiste Giabiconi in 2011, the Birman with eyes “like star sapphires” has her own [Twitter](https://twitter.com/ChoupettesDiary) and [Instagram](http://instagram.com/choupettesdiary) accounts with thousands of followers. Now a [new book](http://www.thamesandhudson.com/Choupette/9780500517741) reveals details of Choupette’s high-flying life, from the recipes prepared by her private chef and served by her ladies-in-waiting (including a cocktail mixing together five kinds of mineral water) to her habits when travelling by private jet. According to the book, it was “destined that Choupette would work only with fashion’s most revered supermodels”: shoots with Laetitia Casta and Linda Evangelista show off her “immaculate fur”. The covers of Vogue and Harpers Bazaar followed, and she is now a true fashion muse, inspiring couture collections and a new capsule make-up line from Shu Uemura (called, of course, Shu-Pette) that features a custom eye shadow to match those sparkling sapphires. (Choupette/Thames and Hudson) 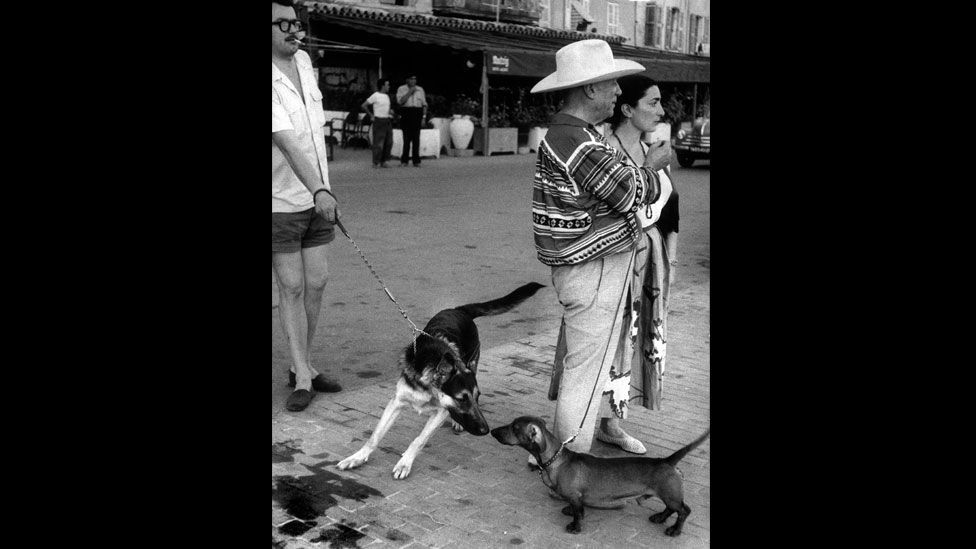 When the great Spanish artist was reimagining Velázquez’s Las Meninas in a series of paintings from 1957, he was careful to include one of his most loyal companions. In place of the regal hound from the 17th Century masterpiece, the Meninas cycle features a tiny sausage dog. Picasso’s dachshund Lump was such an important part of his life that his former owner David Douglas Duncan created a book documenting their relationship. Picasso and Lump: A Dachshund’s Odyssey reveals how Lump took his place as top dog at the Spanish artist’s Cannes home, alongside a boxer called Yan and Esmerelda, a goat. Duncan told [The New York Times](http://www.nytimes.com/2006/08/26/arts/design/26lump.html): “Picasso had many dogs, but Lump was the only one he took in his arms.” (Marc Riboud/Magnum Photos) 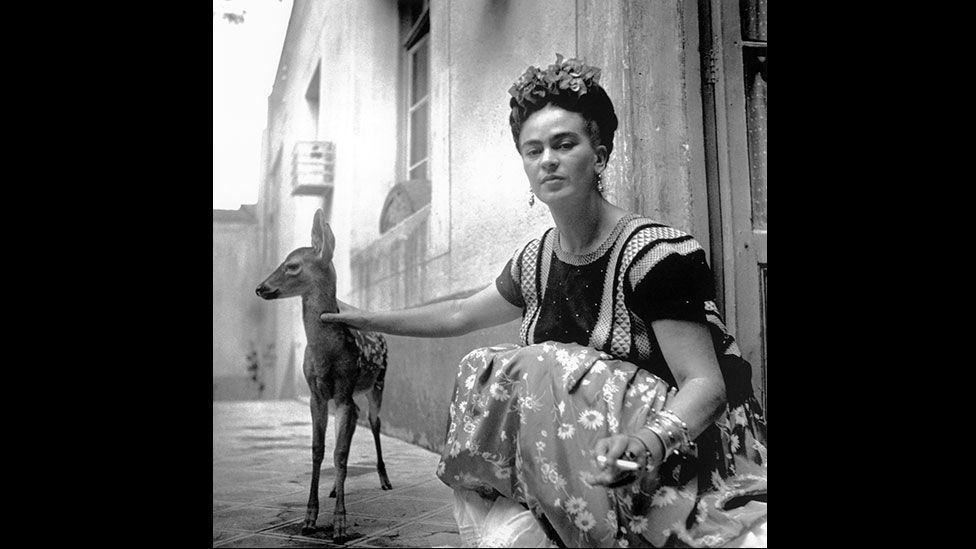 The Mexican painter surrounded herself with animals: her household menagerie included macaws, monkeys, Mexican hairless dogs and an eagle called Gertrudis Caca Blanca. This photo – taken by Kahlo’s long-time lover [Nickolas Muray](http://nickolasmuray.com/) in the 1930s, during their ten-year affair – shows the artist with her pet fawn Granizo. Many of Kahlo’s self-portraits feature animals, and they became surrogates for the children she was unable to have after a bus accident in Mexico City left her with serious injuries at the age of 18. (Nickolas Muray Photo Archives) 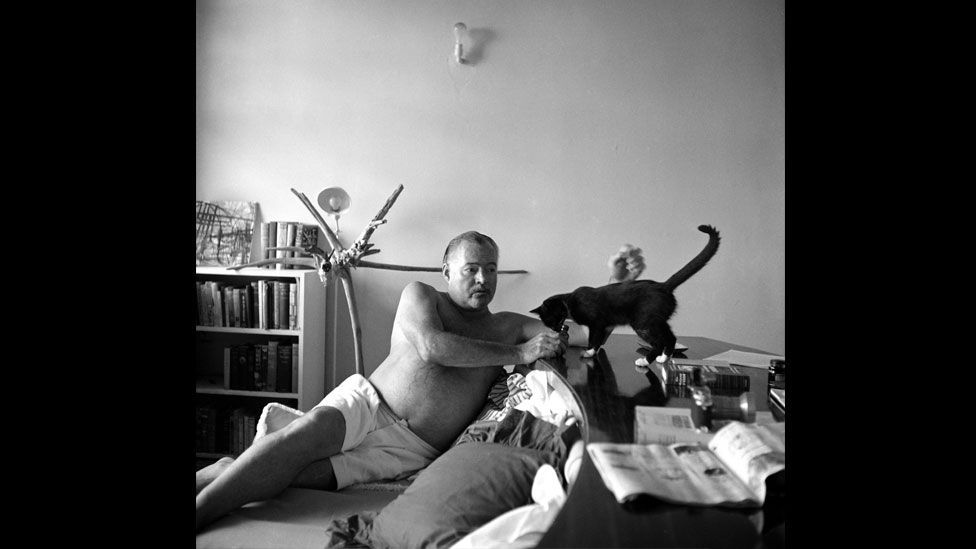 The macho big game hunter and angler also went in for softer things, like his collection of six-toed cats (or polydactyls). In the book Hemingway’s Cats: An Illustrated Biography, his niece wrote that the author referred to his furry friends as “purr factories” and “love sponges”. After he was given his first cat, Snowball, by a ship’s captain, Hemingway was hooked. He had 23 by 1945, and 50 of their descendants still roam the grounds of his house in Key West (they are now [protected by law](http://www.csmonitor.com/USA/Society/2012/1209/How-Ernest-Hemingway-s-cats-became-a-federal-case-video) after concerns over their welfare). [A letter from the young Hemingway](http://www.brainpickings.org/index.php/2012/07/18/hemingway-shoots-his-cat/) reveals his attachment to his pets: after a cat called Uncle Willie was hit by a car in 1953, he had to put it out of its misery by shooting it in the head. He wrote to a friend: “Have had to shoot people but never anyone I knew and loved for 11 years. Nor anyone that purred with two broken legs.” (Condé Nast Archive/Corbis) 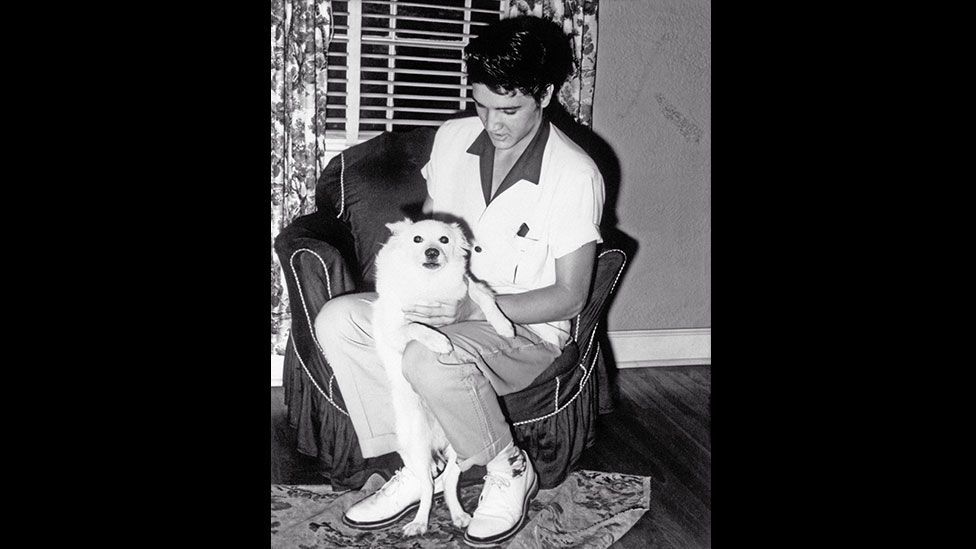 When the King moved to his Graceland mansion in 1957, he was able to indulge a lifelong love of animals. He designed a garden for his mother where she could tend to a collection of chickens, geese, ducks and turkeys, and he kept donkeys in the drained swimming pool until the fence around the property was completed. By 1960, the singer’s Memphis menagerie included monkeys, pigs, poodles and peacocks. His animal ownership had its limits, though. Twice the singer donated wallabies to Memphis Zoo, after receiving them as gifts from Australian fans. Elvis was fond of giving dogs to the women he loved: his wife Priscilla received a poodle, and he gave a dog called Sweet Pea to his mother. His most famous pet was his chimp Scatter, who he trained to look up the dresses of women visiting Graceland. (Pictorial Press Ltd/Alamy) 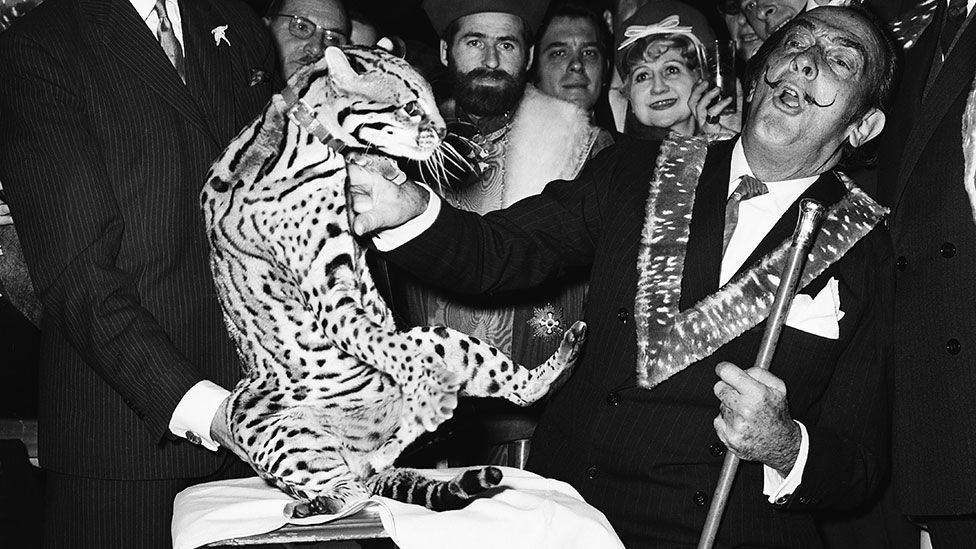 “In through the revolving doors of the staidly splendid Hotel Meurice in Paris comes the great traveling show of Salvador Dalí & Co,” begins [a 1969 article in LIFE magazine](http://www.robertwernick.com/articles/Dali_Lives.htm). After the Surrealist artist and his wife came “Babou and Bouba, the two ocelots given to Dalí by the head of a South American state, and they throw up as they go through the revolving doors and spread a rank jungle smell through the lobby which sets all the lap-dogs on the dowagers’ laps to howling and growling”. The dwarf leopards often accompanied Dalí to restaurants and gatherings, leaving a trail of damage in their wake.Another anecdote recalls a gallery owner in Paris complaining that Babou has “made a nuisance” on his priceless 17th Century engravings, to which Dalí responded: “a nuisance of Dalí’s can only increase their value”. He was right: the dealer doubled the price of his stained artworks. (Keystone/Getty) 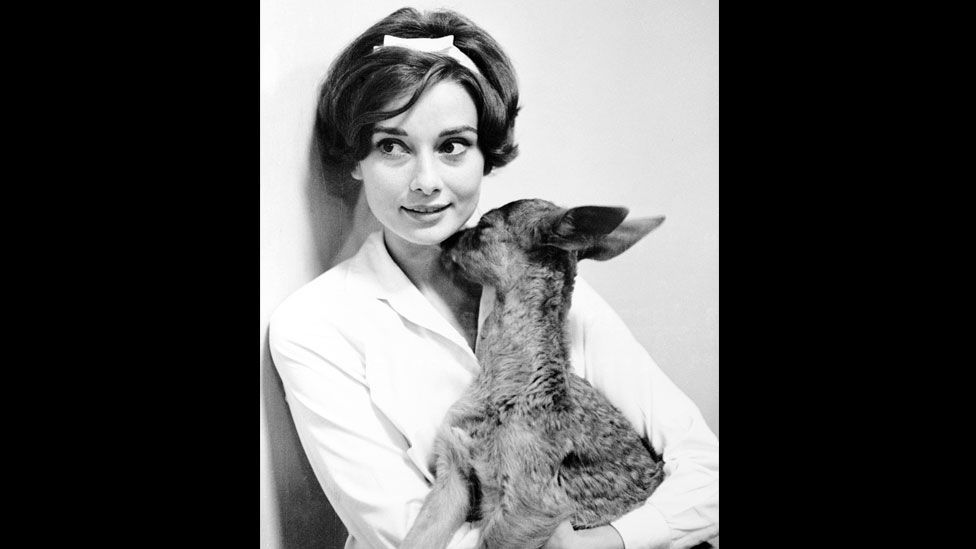 Some animals crop up frequently among artists’ pets. David Hockney and Andy Warhol followed Picasso and produced portraits of their dachshunds, and Audrey Hepburn shared Frida Kahlo’s love of deer . While the actor was making her 1959 film Green Mansions, about a girl in the Venezualan jungle who is followed about by a fawn, a trainer suggested she take her co-star Pippin home to increase their familiarity. Hepburn told a journalist for [The Bulletin](http://news.google.com/newspapers?id=r25YAAAAIBAJ&sjid=BPgDAAAAIBAJ&dq=audrey%20hepburn%20fawn&pg=6852%2C3257525): “She has the run of the house and garden at home: I feed her with a baby bottle.” Nicknamed ‘Ip’, the deer accompanied her to the supermarket in Beverley Hills and slept in a custom-made bathtub. “I’ve fallen in love with her,” said Hepburn. “I don’t have children of my own, but I’m learning a lot from Ip.” (Bettmann/Corbis) 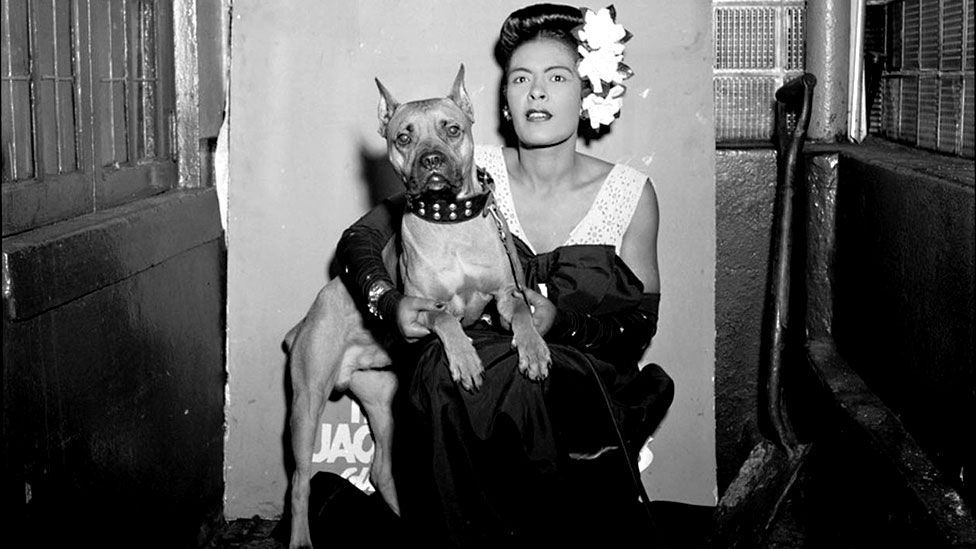 Holiday too found comfort in the company of animals. Brought up by various relatives, with an absent father and a prostitute mother, she was raped by a neighbour at the age of 12 and later became addicted to drugs and alcohol. Despite her abusive human relationships, the jazz singer shared an intimate bond with her dog Mister, who regularly accompanied her when she performed – and even waited in her dressing room during her legendary appearance at New York’s Carnegie Hall. Holiday had a poodle (who was wrapped in a mink coat to be cremated), a beagle, a Great Dane and Chihuahuas, but her boxer was her favourite. When she was released from prison after serving time for narcotics possession, he leapt up on her with such fervour that onlookers thought she was being attacked. Among Holiday’s possessions discovered when she was found dead from liver disease in 1959 was a grocery list that reveals her priorities. It read: “cigarettes, gin, dog food”. (Alamy)