Loading
Private View
Pictures at an execution: The condemned in art
Share using EmailShare on TwitterShare on FacebookShare on LinkedinShare on Whatsapp 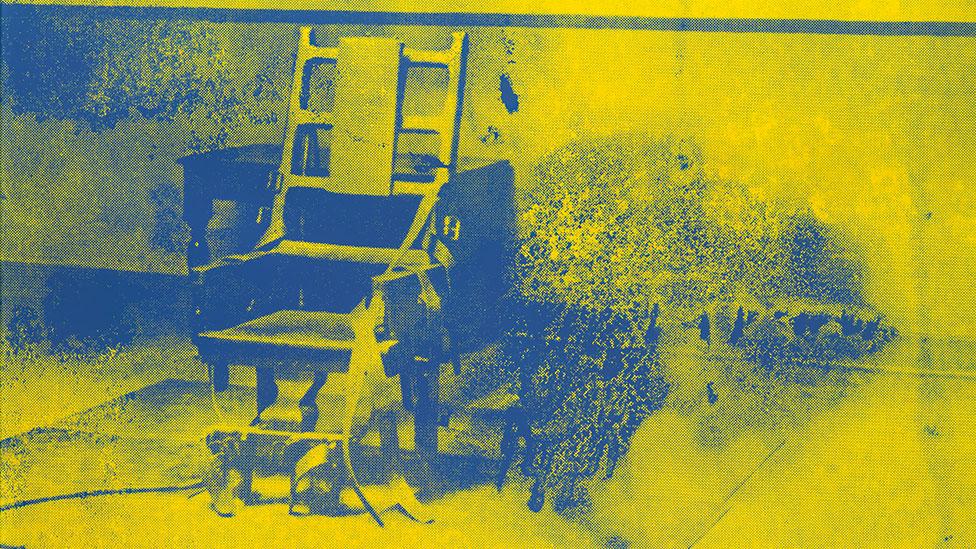 Those were their last words before an executioner took their lives. And for Amy Elkins, a young artist based in Los Angeles, those testaments offered a means to humanise the grim statistics of the death penalty in the United States. Her photography series – which was awarded this year’s Aperture Portfolio Prize and goes on view in New York next month – overlays the mugshots of the condemned with text of their final words, coursing down the image like the current of a river. Another series features letters Elkins exchanged with death row prisoners, including several in solitary confinement, interspersed with photographs the artist took in an effort to simulate their thoughts. A seascape, a forest, an expanse of concrete: these images, mundane in other circumstances, become through Elkins the inner worlds of men whom the state will destroy.

“People write of capital punishment as if they were whispering,” argued Albert Camus, the most implacable of death-penalty opponents, in his 1957 Reflections on the Guillotine. To an extent, we still do. This year several US states, facing a shortage of drugs for lethal injections thanks to a European moratorium, resorted to  untested and unreliable combinations that resulted in severe pain and, in one case, a failed execution. Though campaigners condemned the executions as barbaric and inhumane, and though support for capital punishment has declined in the United States, these botched lethal injections spurred little public discussion. Today, although the death penalty is illegal in all but 22 countries, we still write about it in a whisper, preferring not to see the consequences of society’s ultimate sentence. Can art speak more loudly? It certainly has throughout art history; perhaps it can again.

Western art history bulges with depictions of martyred saints and slaughtered innocents, but capital punishment is something more precise. It refers not just to a death, but to a legal death. There is no death penalty in a state of nature; only society, and the laws that govern it, can turn murder into alleged justice. Capital punishment exists at a paradoxical junction point of civilisation and barbarism. It is “the most premeditated of murders”, in Camus’s phrase, in which the force of law is used to justify something otherwise unjustifiable. 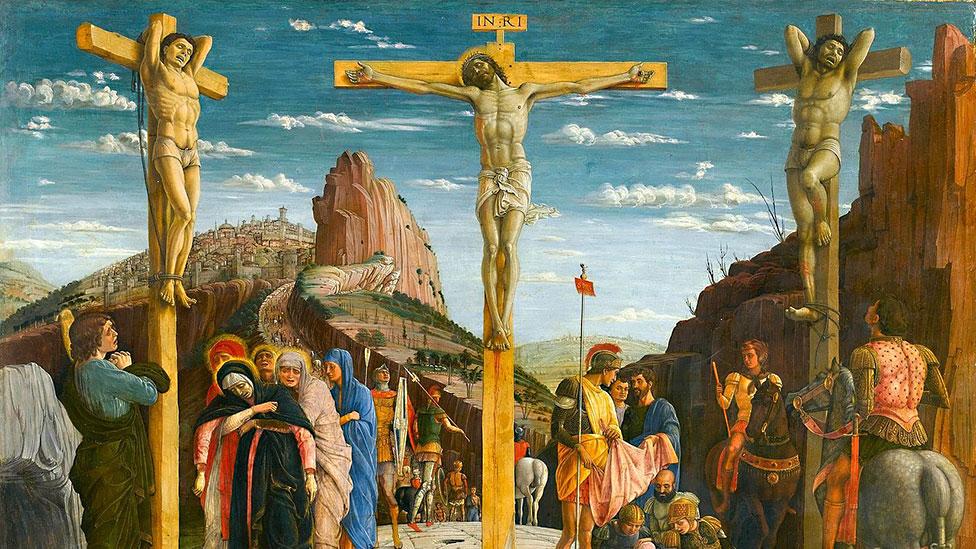 Two archetypal executions hover over the Western world’s artistic depictions of the death penalty. The first is that of Sophocles’ Antigone. Sentenced to death for giving her condemned brother’s corpse an honourable burial, Antigone is sealed in a cave but hangs herself to ensure an honourable death. (Though now held up as a great anti-death penalty play, it was nothing of the sort in 441 BC; performances of Greek drama would be preceded by parades of captured war orphans and dead soldiers’ armour.) The second, of course, is that of Jesus Christ. The crucifixion may mark Christ’s passage from humanity to divinity, but it was also a simple application of Roman law; Jesus, after all, was crucified alongside two thieves. Andrea Mantegna’s blunt and forceful Crucifixion of 1456–59, in the collection of the Louvre, captures the dual divine and legal nature of Christ’s execution. He and the two thieves are splayed on the crosses, sinews bulging, and beneath them are not only Mary and John, but also ordinary soldiers gambling with dice.

In Europe during the Middle Ages and early Renaissance, capital punishment was not hidden away in execution chambers. It was a public spectacle, advertised to city-dwellers and featuring carefully stage-managed processions. Gruesome capital punishment, as well as depictions of it in art, had a dual purpose. It not only enforced civic order; it also served to encourage piety and warn against eternal damnation. In a time when kings ruled by divine right, every application of the death penalty was a miniature preview of the Last Judgment. 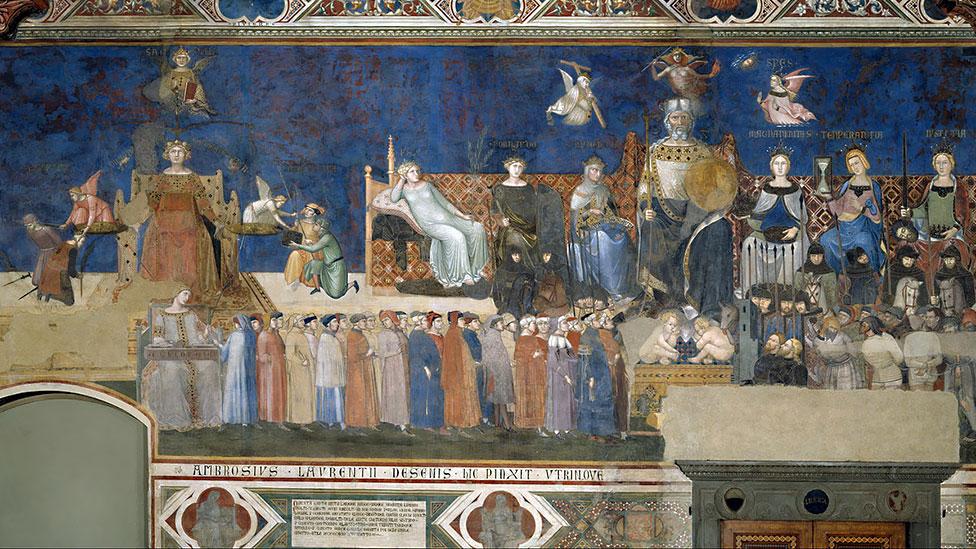 The most honourable means of death was decapitation, as shown in the magnificent Allegory of Good Government, painted in 1339 by the Sienese artist Ambrogio Lorenzetti – wherein Justice sits with a sword in her right hand and a severed head on her knee. Hanging was a less honourable penalty, and beneath that was being broken on the wheel, a horrible punishment that numerous anatomy-curious Renaissance painters would have witnessed. Religious crimes were often punished via burning at the stake; in Francesco Rizi’s 1683 painting at the Prado, Madrid’s Plaza Mayor is filled with thousands of spectators waiting to see the condemned go up in flames. In fact, art itself often played a role in the death penalty. In Italy, a comforter would follow the condemned carrying a tavoletta, or a painted panel of the Passion or the crucifixion, to gaze on in his last moments.

By the 18th Century, capital punishment was still a public spectacle. William Hogarth satirised London’s taste for executions, which took place on public holidays, in his sharp engraving of a lazy apprentice being carted to Tyburn, alongside drunks, hawkers, fighting children and yapping dogs. (On the frame of the image Hogarth included two gibbeted skeletons: a bonus punishment, in which the bodies of the executed were hung on public display.) But in France the more gruesome forms of capital punishment were being phased out, and the country soon instituted a single, putatively egalitarian mode of execution: the guillotine. Jacques-Louis David, who in The Death of Socrates depicted the Greek philosopher’s jury-ordered suicide, also sketched Marie Antoinette on her way to the “national razor”, her face stony, her hands bound behind her. Indeed, David is almost certainly the only artist ever to apply the death penalty. For he was not just a painter; he was a revolutionary and a member of the National Convention, allied with Robespierre. Like most Jacobins, David cast his ballot for the death of Louis XVI in 1792 – and after Thermidor he was lucky to avoid the guillotine himself, ending up in prison in the wake of Robespierre’s fall. 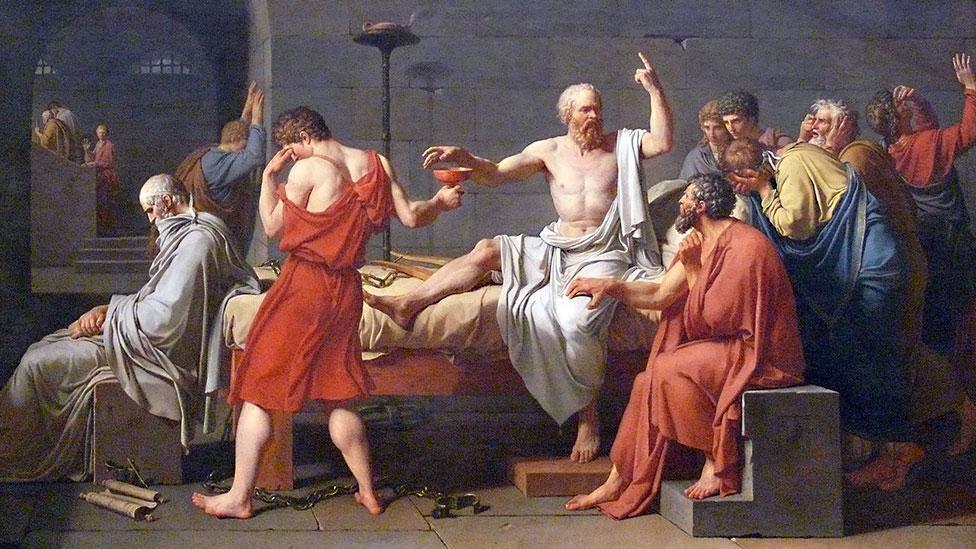 In the modern era the death penalty has moved indoors. Executions were no longer visible, and so the instruments of execution – the noose, the injection table and especially the electric chair—have become synonymous with the condemned. Andy Warhol, too often misunderstood as an apolitical artist, in fact produced some of the most sinister art of America’s hot 1960s, and alongside his race riots and car crashes he produced multiple paintings of electric chairs, impassive in deserted death chambers, silkscreened in serial, stomach-turning repetition. The repeated electric chairs testify both to the abundance of executions as well as the numbing effect of media representations of violence, including state violence. The only sign of life in Warhol’s electric chair paintings is a printed sign on the wall, reading, over and over, “SILENCE”. 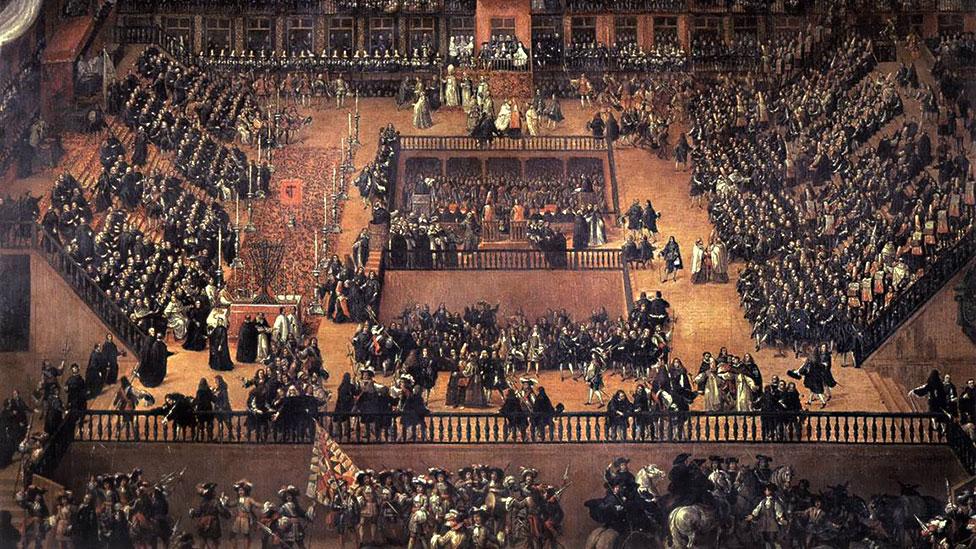 Warhol kept mum on his individual political beliefs, preferring to let his art do the talking. But several contemporary artists have taken much more vocal stances. In her commanding photographic series The Innocents, Taryn Simon shot exonerated prisoners freed from death row, but with a harrowing twist: the photos are taken at the sites of the crimes for which they were falsely convicted. But the most powerful contemporary art to understand the true nature of the death penalty may come from Japan, where capital punishment is still legal. In Tokyo last month, an exhibition took place of drawings and paintings created by 34 Japanese on death row. One of the condemned painted a classical landscape. Another drew a nude figure alone in a cell, clawing at the brick walls. As to what the artists may have felt when they made these serene or harrowing images, we may never know. By the time the show opened, six had already been executed.