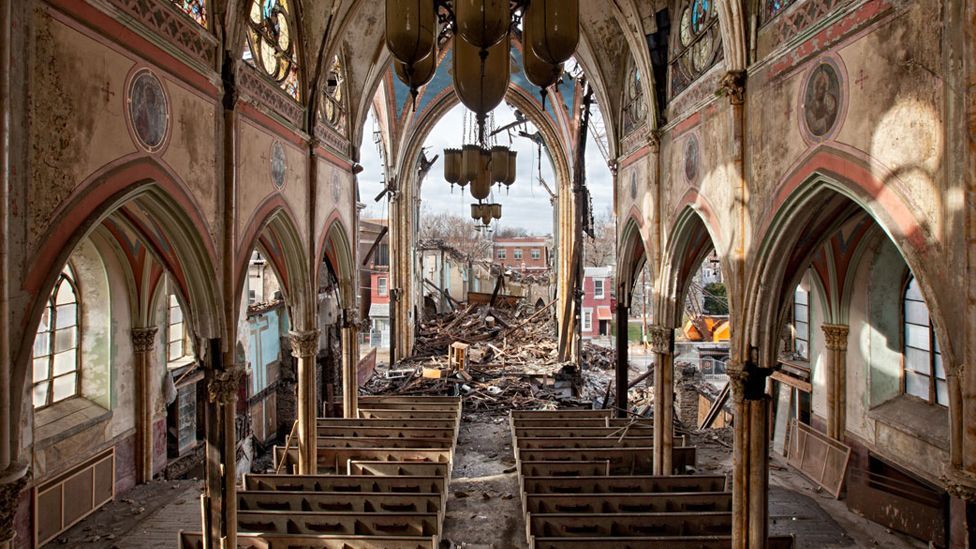 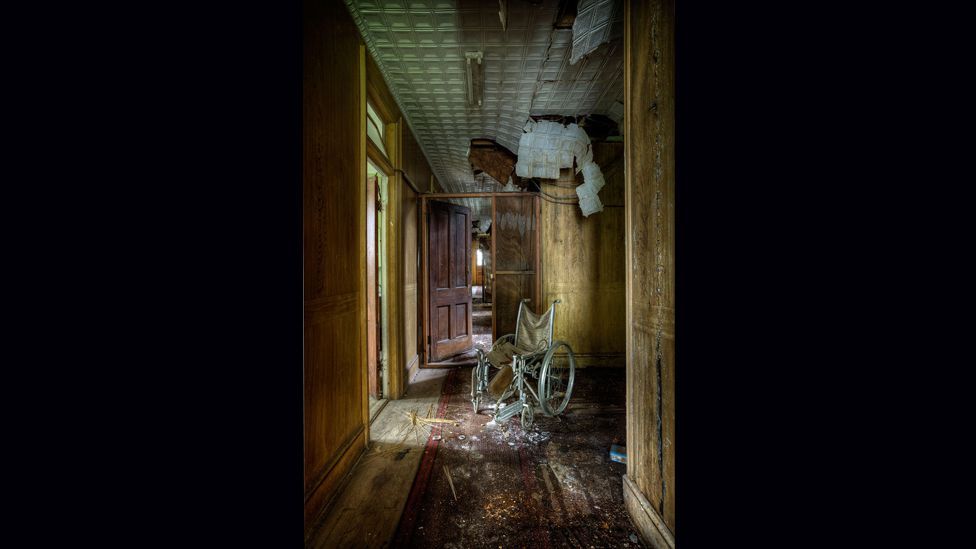 “People love to use Detroit as a poster child for the abandoned urban landscape … but it's not just Detroit that is suffering from the loss of urban infrastructure. The collapse of industries has torn holes in the identities of many major cities,” says Matthew Christopher. The photographer began exploring abandoned buildings when looking at the history of mental health care in America, but soon widened his search. A new book, [Abandoned America: The Age of Consequences](http://www.abandonedamerica.us/), brings together his images of prisons, hospitals, churches and hotels. Christopher aims “to connect the dots, to show that it is not simply one type of structure or one geographic location that is affected”. His photographs reveal both decaying industrial giants and derelict domestic spaces. “The sense of the sublime – the awe-inspiring and fearful – was just as present in a power plant’s massive turbine hall as in the delicate way that ivy had worked its way through a broken window and across the wall of a forgotten bedroom.” This hotel drew visitors hoping to be healed in the area’s mineral springs: “many of the vacationers’ personal items remained: a wheelchair in the hallway, a book of prayers, a blue dress still hanging on the wall.” (Matthew Christopher) 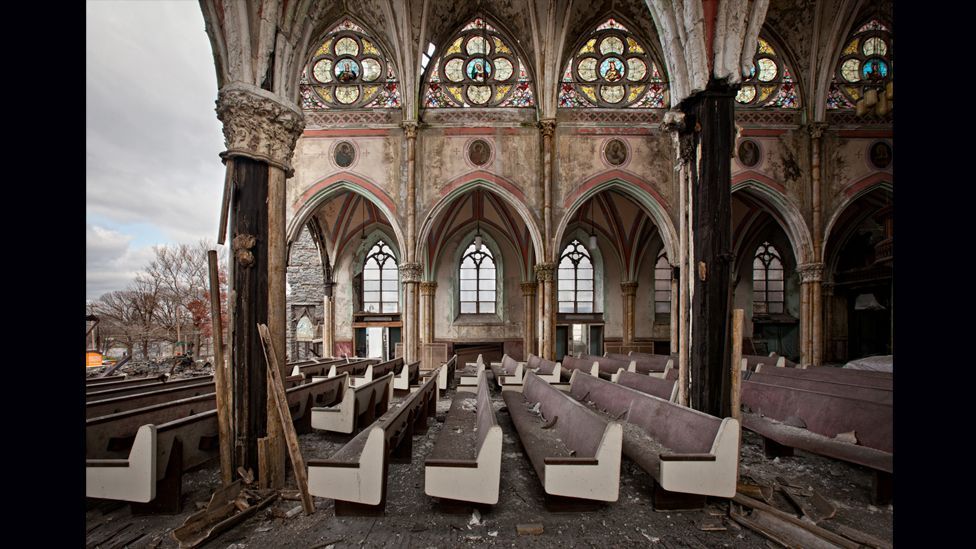 In his book, Christopher describes how permanent many of the abandoned buildings seemed, despite their state of disrepair. “While researching the history of these churches and photographing them, I am often struck by the optimism of the parishes in constructing them … The prevailing sentiment seemed to be that the churches would serve their communities for hundreds of years to come, much as the cathedrals of Europe had done. I sometimes wonder what the reaction would have been if someone had told the Redemptorists that St Boniface would only last 140 years.” It’s a theme that rings true across all the places he photographed. “I feel my generation is the product of an age where many of the ‘too big to fail’ institutions did just that, where architecture became consciously disposable. In less than ten years, a Borders Bookstore might become a Target, a chain restaurant could go through three different life cycles, and a church might be converted into apartments. We are in essence planning for failure (or transition, if you prefer), whereas only a century ago the mindset was one of continued progress and expansion.” (Matthew Christopher) 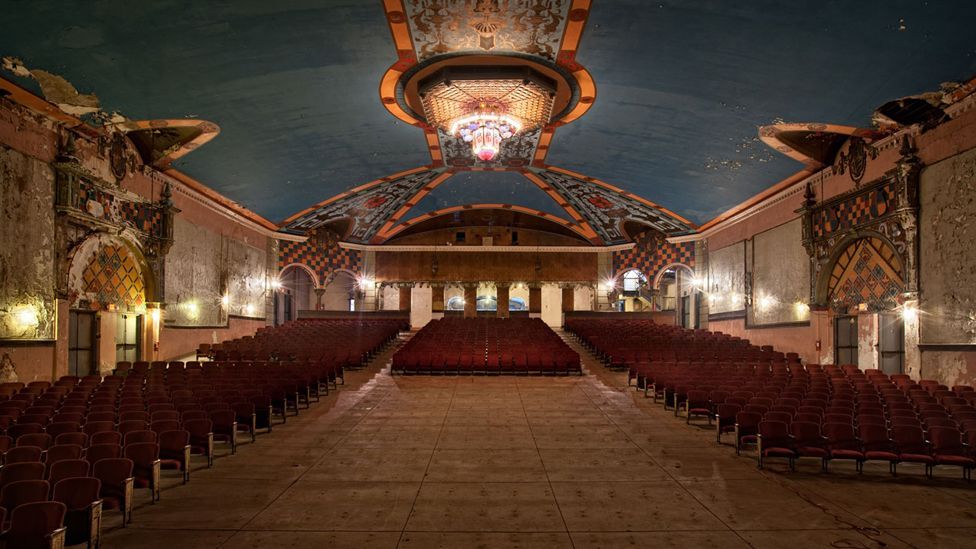 “The movie palaces of those early Modern days, like the Lansdowne Theatre, present displays of middle-class opulence that are nearly unimaginable now,” says the writer and critic James Howard Kunstler in his introduction to Abandoned America. “Reflect on what that suggests about the psychology of yesterday’s working people: they believed that they deserved to have beauty in their lives, and the builders agreed to furnish it.” The cinema opened in 1927 with a screening of the silent movie Knockout Riley and closed 60 years later following an electrical fire in the basement during the showing of Beverly Hills Cop II. It was nearly gutted to be turned into an electrical supply storehouse, but now a campaign is raising funds for restoration. While Christopher doubts his images can change prevailing trends in building design, he hopes “they can help people appreciate older, neglected buildings. There's too much money to be made from planned obsolescence … but we have a wealth of historical sites that I feel we really need to cherish, both in active sites and inactive ones.” (Matthew Christopher) 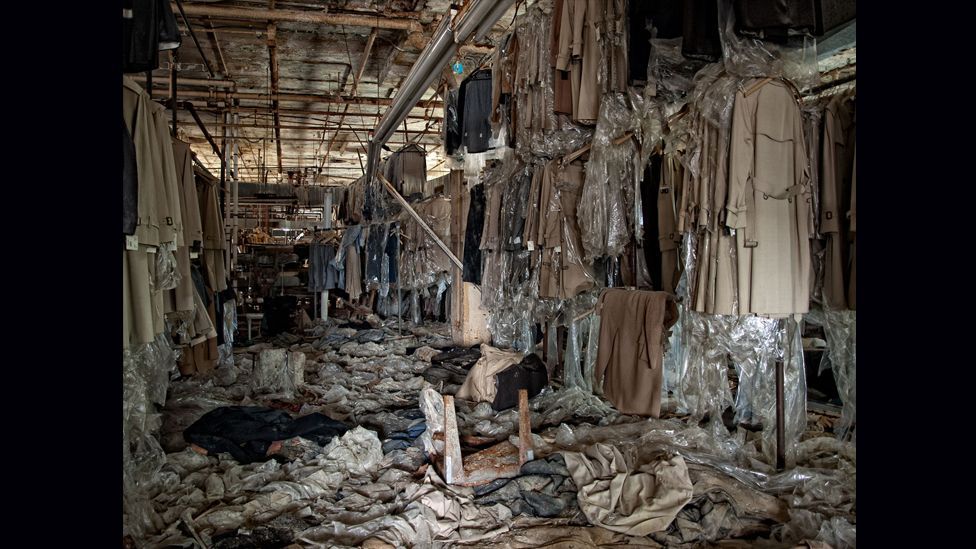 “When I visited the factory in 2008, it was still full of hundreds upon hundreds of coats, many still in their plastic slip covers and in perfect condition,” says Christopher. He chose the title ‘Abandoned America’ because he believes his images reveal more than a set of beautiful ruins. “Buildings are physical manifestations of the ideals with which they were founded and when they are abandoned that says something about the culture they exist in, and changing priorities,” he says. “When a factory that supported an area closes because it's easier to shirk labour laws and environmental standards in countries where child labour can still be used to make our clothes, that's a powerful subject.” The building has now been converted into the Baltimore Design School. (Matthew Christopher) 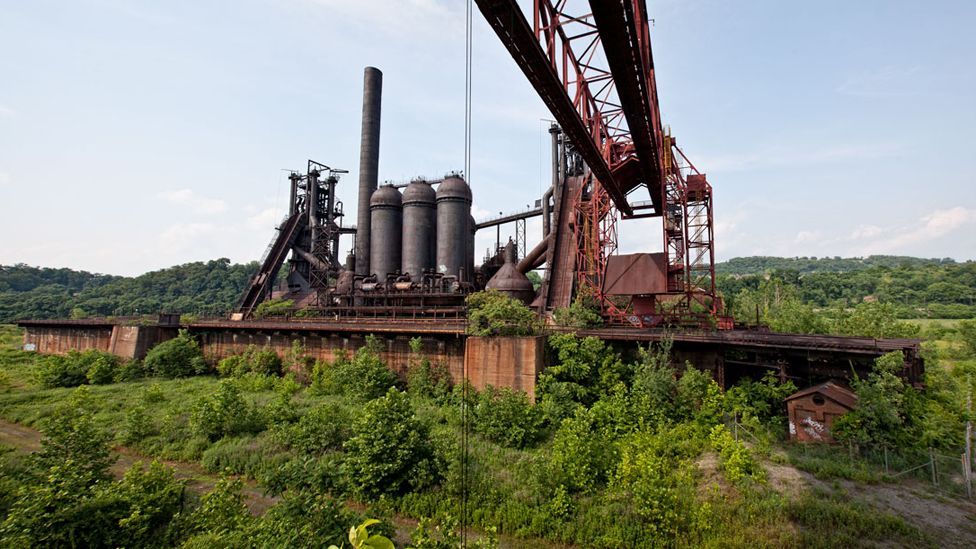 Built in 1906, the Carrie Furnaces were part of a complex that was razed to make way for a shopping centre in 1999; they survived because they were on the other side of a river. “Sites like Carrie Furnaces – once part of the Homestead Steel complex in Pittsburgh – and Bethlehem Steel were the first and second largest steel manufacturers in the nation respectively, and entire cities had been built around places like them. Now they were rusting away as the economies around them imploded,” says Christopher. In 2006, however, the furnaces were designated as a National Historic Landmark and [a campaign is underway](http://www.riversofsteel.com/preservation/heritage-sites/carrie-furnaces/) to create walkways allowing visitors to see them up close; a truss bridge used to carry crucibles of steel across the river is set to be converted into a pedestrian bridge. Christopher cites Ellis Island in New York and the Paramount Theatre in Austin as places that were almost left to rot before they were restored. “People often write off places that are abandoned and feel that ‘progress’ equals ‘demolition’ without realising how many places were rescued by people with vision.” (Matthew Christopher) 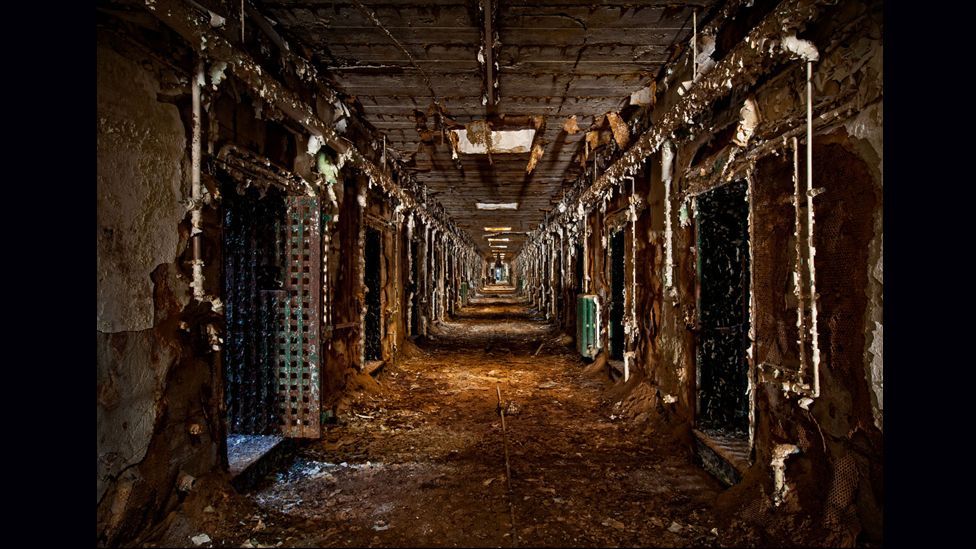 A site with a violent past, Holmesburg Prison saw several riots and a hunger strike that ended with its leaders being locked in cells with closed windows during a heat wave; four men died of injuries consistent with severe beatings and being boiled alive. Between 1951 and 1974, medical experiments were conducted on inmates exposing them to herpes, skin-blistering chemicals and carcinogenic compounds. Christopher gained access to the prison in 2000, 15 years after it closed. “The thick walls were badly deteriorated in parts as trees and vines effortlessly pried the bricks apart with their roots, and some cells were flooded with several inches of water. It was hard to believe what Holmesburg had once been, although remnants were everywhere. Prison records filled the hallways, barbed wire spiralled around the guards’ walkways, and graffiti and collages adorned many of the cell walls.” (Matthew Christopher) 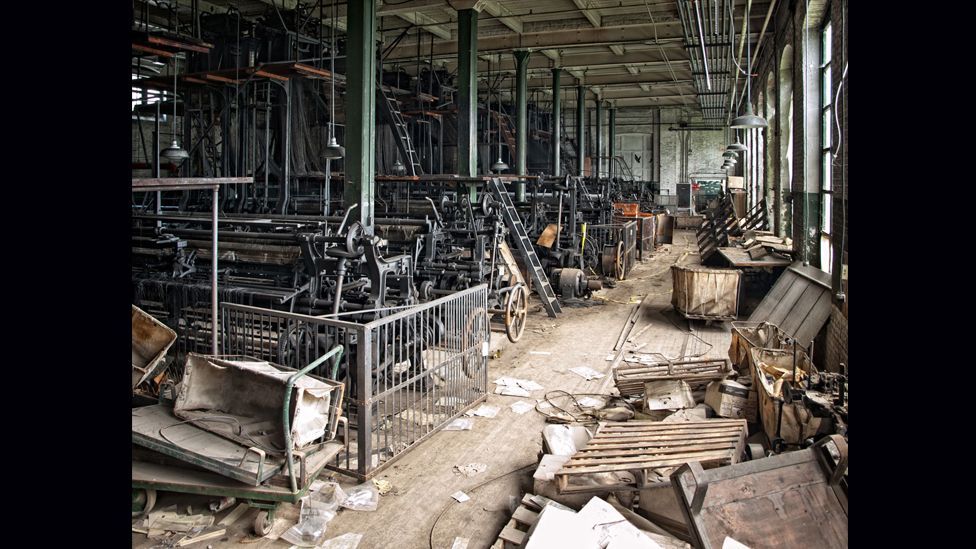 “In 2002 the company finally shut its doors mid-shift, telling employees that the factory was closed: ‘effective immediately’,” says Christopher. “Of the nearly one dozen Nottingham looms – each weighing 20 tons and measuring 50 feet in length – that were imported from England … only one now remains, unprotected from the elements. I have visited this site many times over the years and watched with dismay as it has disappeared bit by bit.” He takes a risk each time he photographs an abandoned space. “I have gone into some very, very dangerous buildings to photograph them and have been lucky to only have relatively minor injuries – a few stitches and a nail in my foot were the worst of it. These sites are tremendously dangerous and many people have died or been horribly injured in abandoned sites … Probably the biggest risk is falling through a floor, but there are a lot of environmental toxins, [including] asbestos and lead paint … There is nothing 'safe' about it, really.” (Matthew Christopher) 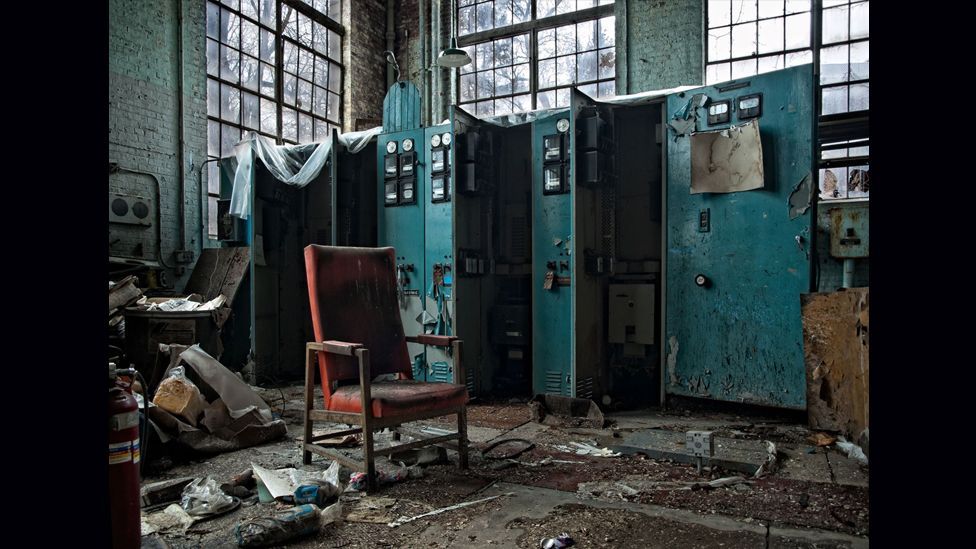 Christopher describes how this building was decaying even when still a functioning prison. “The roofing and ceilings were rotted and crumbling, and windowpanes regularly fell from their frames onto areas where the stretchers and cots were placed, sometimes injuring the inmates. Toilets and sinks didn’t flush or sprayed water into the cells, and bedding was placed in areas where water had pooled from radiators … the drainage system didn’t work properly, so the showers were flooded with water that reeked of sewage; leaks from the ceiling gave the inmates rashes and sores. Nearly every area of the prison dripped with filthy water, forming stalactites and rusting holes in walls and the floor.” It was finally closed in 2004, and torn down in 2010 to make way for a housing complex. Conversely, Christopher has encountered people living in abandoned spaces. “One of the prisons I photographed had a number of homeless drug users in it. It was a scary experience in some ways because you'd see a shadow move out of the corner of your eye, and when you turned it was in fact someone moving along one of the walls on the other side of the room.” He believes the term ‘abandoned’ is a fluid one. “As soon as people leave and a place is officially closed, it is of interest because the purpose the space was intended for is no longer in effect and the building is in limbo.” (Matthew Christopher)