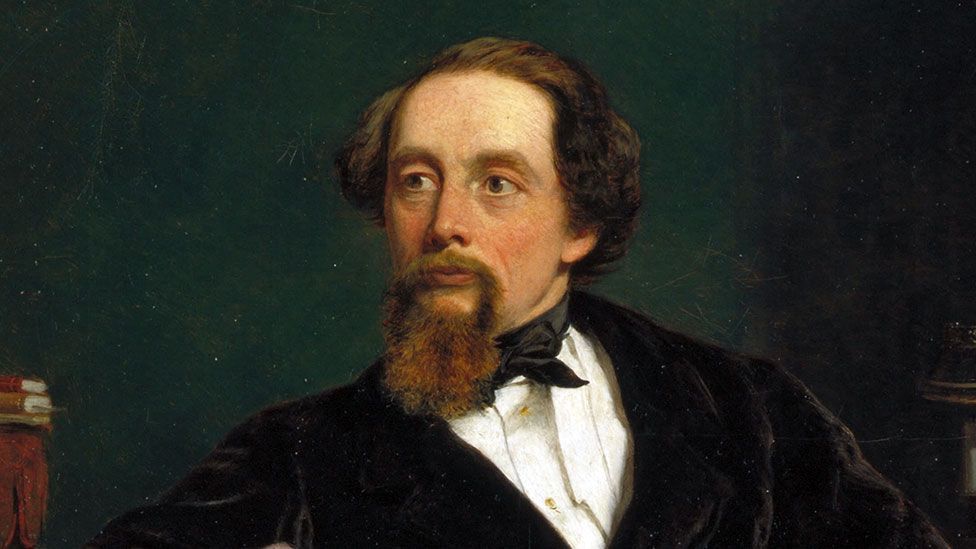 By Lucinda Hawksley 17th December 2014
Festivals celebrating the great writer take place every year, from Texas to Mumbai to Holland. What makes him so attractive, all these years after his death? Lucinda Hawksley investigates.
I

In the winter of 1867 a work-weary Charles Dickens arrived in Boston harbour, following a long sea voyage from England. It was 25 years since he had last visited the US, at which time he had travelled with his now-estranged wife, Catherine, celebrated his 30th birthday in Massachusetts and realised that he was indeed an international celebrity. That a quarter of a century had elapsed was not only due to the Civil War, but because it had taken that long for many Americans to forgive Dickens. His criticism of the country in Martin Chuzzlewit and in his travelogue American Notes had put American noses out of joint.

For a man of the mid-19th Century, Dickens travelled surprisingly far around America and Canada, although he made it no further south than Richmond, Virginia. However this hasn’t stopped Galveston, Texas, from celebrating the author and his works with a huge annual festival. Dickens on the Strand began in 1973, when the island’s fortunes were dwindling and many of the 19th Century buildings on the Strand (a street in downtown Galveston) were facing destruction. That first festival was a fundraiser to preserve the threatened architecture – today the street houses elegant shops in what were once predominantly warehouses – and to look back to the island’s glory days in Dickens’ own lifetime, when it was one of the wealthiest places in Texas.

According to recent annual ticket sales, around 40,000 people throng the streets for Dickens on The Strand – to put this in context, Galveston’s population is fewer than 50,000. The event has become so popular that hotels are booked up months in advance, with many attendees booking for the following year when they check out at the end of the festival. Locals just refer to the festival as ‘Dickens’ and it’s common to hear people wish each other “Happy Dickens” as the weekend begins. 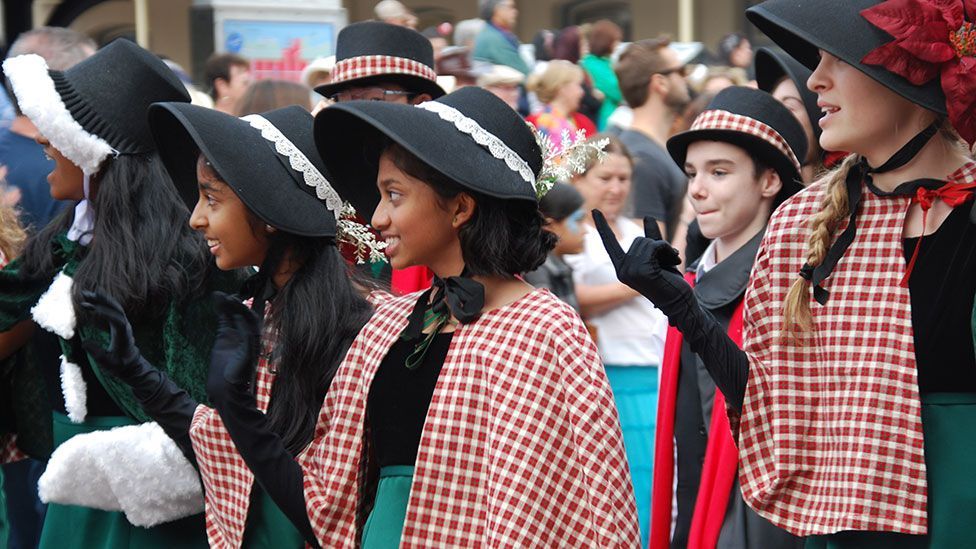 Oliver Twist would never have needed to ask for more at a Texan Dickensian event. Walking along the Strand, he would have encountered stalls selling deep-fried shrimp, butterfly crisps, fried Oreos, funnel cake, fried green tomatoes and the unsettling sight of everyone from urchins to Queen Victoria’s ladies-in-waiting chomping on turkey legs (a huge version of chicken drumsticks – everything really is bigger in Texas).

The festival’s central parade – accompanied by artificial snow even on the hottest of Texan days – is a chance for visitors to see local emergency workers and military cadets, choirs of carol singers, and the ghosts of Christmas Past and Christmas Present (they told me the ghost of Christmas Yet to Come was still to arrive). Other attractions this year included a stiltwalking Christmas tree, suffragettes calling for votes for women, London bobbies walking the beat, fire-eaters, falconers, singing pirates, a whole airship of Steampunks, who steer their course to Galveston every year from New Orleans and Mr Charles Dickens himself.

Among the home-made costumes, revamped bridesmaids dresses and hastily concocted Artful Dodger outfits perambulate groups of elegantly clad men and women whose clothing has been meticulously made to be ‘period correct’. But this is the fashion of Victorian Texas: many of the costumes would have raised a querying eyebrow on the streets of Dickensian London, though to a 19th Century Texan fashionista, this was the clothing to be seen in.

Of all the famous Victorian authors, Charles Dickens retains a place in public affections throughout the world, and Americans adore him as if he were their own. Perhaps this is because Dickens wrote from the heart; he wrote about emotions and situations that people still identify with today. Although the English language has changed since Dickens’ time, the essence of his storytelling remains as relevant as it was in the 19th Century. Dickens’ books were not only stories, they were social commentary intended to change the world. And they did just that. Oliver Twist helped bring about changes to the Factory Acts and other laws that kept children in poverty; Nicholas Nickleby was the reason brutal Yorkshire Schools – where unwanted children were sent and abused – were closed down; and A Christmas Carol remains famous around the world for its message of redemption and charity.

A Christmas Carol was written after Dickens witnessed terrible poverty on the streets of Manchester, in the north of England, and it was intended to make every reader stop and think about how they could make a difference to their society. Dickens wrote to a friend that the story would strike “a sledge-hammer blow on behalf of the Poor Man’s Child”. A Christmas Carol has never been out of print since it was published in 1843 and performances continue to take place all over the world: among the many productions this year is a musical in Mumbai, an outdoor reading by American actors in London’s Hyde Park and a hip hop version in Chicago.

Galveston isn’t the only unlikely place to have taken Charles Dickens to its heart. At the Cow Palace in San Francisco, a Dickens festival spans all four weekends between Thanksgiving and Christmas. Tacoma, Washington, holds annual festivities in December, as does the appropriately named Holly, in Michigan and the city of Spartanberg, South Carolina. 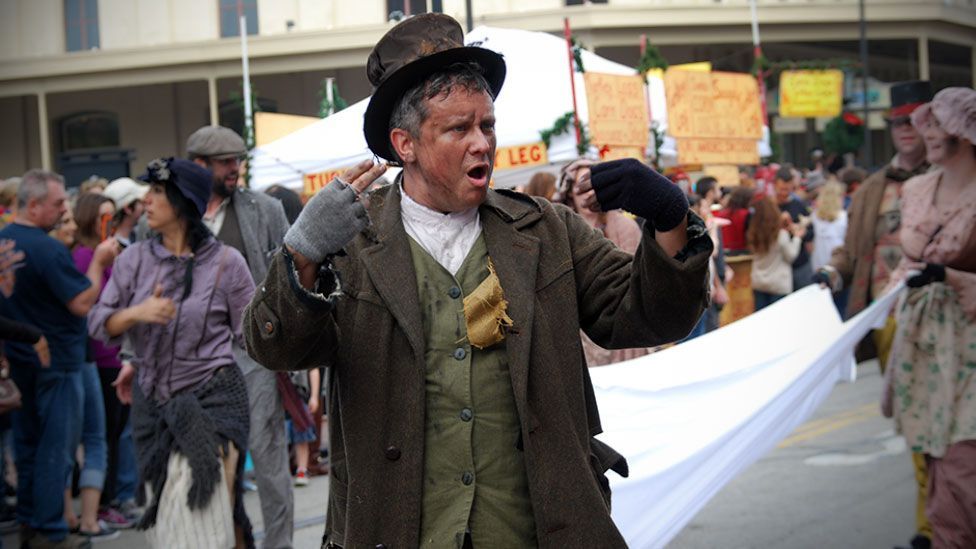 And it's not only the USA that has a love affair with Dickens. The English author has inspired festivals all over the world and is celebrated every year with lavish festivals in Broadstairs and Rochester in his native county of Kent. One of the biggest Dickens festivals in the world is held in the unlikely location of Deventer, Holland. Each year on the last weekend before Christmas, the Deventer Dickens Festival expects to attract around 150,000 people from throughout Holland, Belgium and Germany. Over 950 Dickens characters mingle around the Christmas market with carol singers, antiques vendors and costumed festivalgoers. It was begun by Emmy Strik whose father took her to England for the first time when she was 13 and shared his love of Dickens’ novels. “The translated paperbacks were on the shelf and I started with David Copperfield,” she says. “That is the reason I chose to recreate a Dickensian Christmas, and the decor was already there: I live in a street in Deventer with old houses. It really wasn’t difficult to recreate the time in which Charles Dickens lived.”

In 2010 I met a delegation from South Korea who were hoping to set up a Dickens festival in Seoul (although sadly it hasn’t happened yet). After the bicentenary of Dickens’ birth in 2012, I thought people would tire of even hearing his name, yet the commemorative year seems to have made his popularity and fame even greater. In 2014, a new branch of the Dickens Fellowship was founded in Carrara, Italy, by two schoolteachers eager to pass on their love of the author to their pupils. I have been told repeatedly – in places including Cuba, India and Norway – that Dickens is loved because he embodies the values that people like to believe their community embraces. 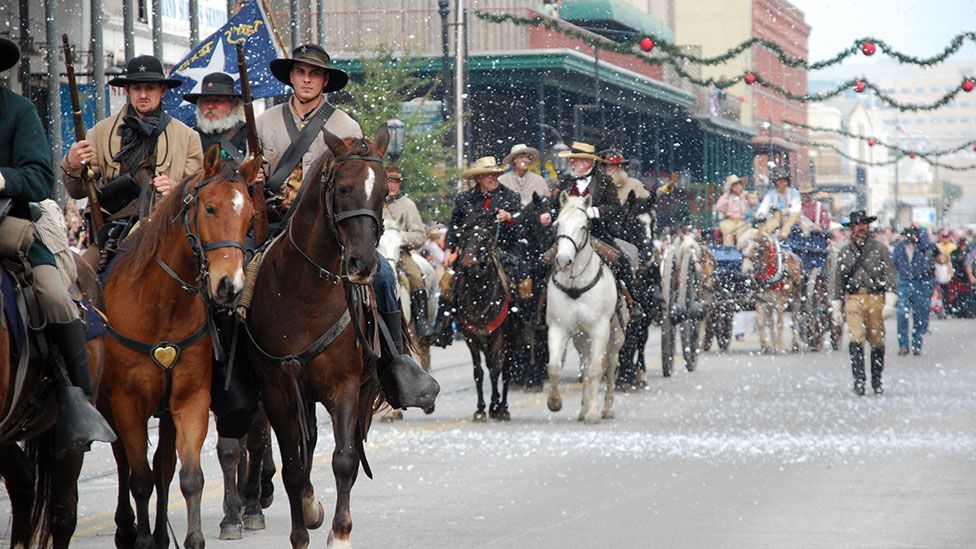 One of the most fascinating aspects of Dickens is how he appeals to religious people of all persuasions. I have been told by fervent Christians, Muslims and Hindus that they revere Dickens as a man of great faith, which he was. Yet Dickens, who became a Unitarian as a direct result of his first visit to America, was scathing toward organised religion, and roundly critical of those who thought all they needed to do was to worship at a church, temple or mosque, instead of offering practical help to those in need.

When Charles Dickens died, one of his friends overheard a child worker in London’s Covent Garden ask, “If Dickens is dead, does that mean Father Christmas will die too?”. This same sentiment seems to accompany the many Dickens festivals around the globe, which honour a man who still – all these years after his early death at 58 years old – affects the way in which we celebrate Christmas.