Loading
The It Girl | It Girls
Who was the mysterious Madame X in Sargent’s portrait?
Share using EmailShare on TwitterShare on FacebookShare on Linkedin 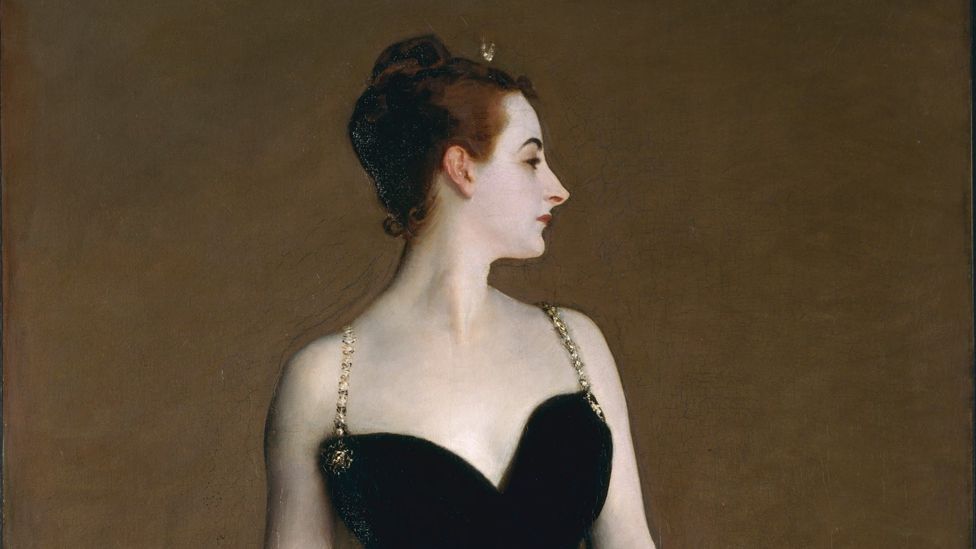 She looks off to the right, staring out into the middle distance, her mouth shut tight, her dainty nose directed ever so slightly downward. Her right hand rests upon a bare wooden table, while her left hand, decorated with a wedding ring, clutches a folded fan. Her hair is twisted up, away from her shoulders – which are bare save for two straps, somewhat unconvincingly holding up her cinched, classical black gown. On her head is a little diamond tiara, but other than that and the ring she wears no jewelry. Between her long neck and the plunging, heart-shaped neckline of her dress lie acres of flesh, as cold and pale as ice milk.

John Singer Sargent’s portrait of the so-called ‘Madame X’, painted in 1884 and now in the collection of the Metropolitan Museum of Art in New York, has attracted and repelled generations of gallery-goers. The stern face and the pseudonymous title have made her into a figure of mystery, an American Mona Lisa of inscrutable character. But her mystery, her anonymity, is not the result of lost historical documents or the covering of artistic footprints. Madame X, so alluring and so enigmatic, was once a bona fide celebrity – before it all came crashing down. 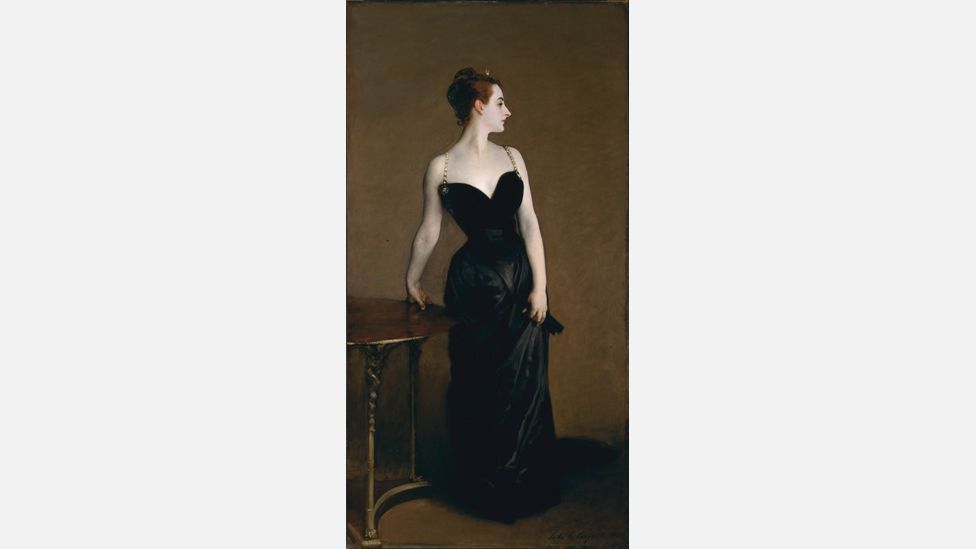 John Singer Sargent’s Portrait of Madame X caused a massive scandal upon its debut in Paris in 1884, in part because it emphasised the sexual allure of a married woman (Wikipedia)

She was born Virginie Amélie Avegno, the daughter of white Creole parents in New Orleans. Her father died fighting for the Confederacy at the Battle of Shiloh in 1862. In 1866 her young brother died too, of congestive fever. Her widowed mother had had enough, and after taking out loans on the family plantation she left with her daughter to Paris in 1867. The City of Light must have seemed like a daydream after the devastation of the Civil War and the travails of Reconstruction that were just beginning. But Amélie had been brought to Paris for more than that. She was there to get married, big time – which she promptly did, to a banker more than twice her age, Pierre Gautreau.

She was beguiling. Not conventionally pretty, she nevertheless cut a striking figure with her thin lips and extreme pallor; according to one Sargent biographer, she not only covered herself with powder, but also consumed arsenic to sap her skin of colour. (It was actually a less toxic substance .) “I remember seeing Madame de Gautrot [sic], the noted beauty of the day, and could not help stalking her as one does a deer,” wrote the American expatriate artist Edward Simmons. “Her head and neck undulated like that of a young doe…. Every artist wanted to make her in marble or paint.” Yet though she had public admirers and a packet of money, she still struggled to climb to the top of Parisian society; the gossip pages took only limited notice of her, and as a Creole she would have been excluded from the highest echelons of the French beau monde. She, and her ambitious mother, were keen to make her name. And the young John Singer Sargent, who had commissions from fellow expats but craved French acceptance, was keen to make his.

So there they were, the American society madam and the American painter, both in their late 20s, both eager for their big break. It took 30 sessions, and, as he would throughout his career, Sargent chose the dress: the little black number, which might actually be a two-piece skirt and bodice brutally drawn in at the waist, with severe décolletage. And – as a preparatory sketch in the Tate’s collection shows – she originally appeared with one of the dress’s straps missing. That bare shoulder, plus the wedding ring on her left hand, made a scandalous combination. It signified, not very subtly, that this married woman would look kindly on introductions from other men.

The Salon of 1884 marked the sixth time that Sargent had exhibited in France’s most important art exhibition. He knew the portrait of Mme Gautreau was a risk. But never had he had such bad reviews. Critics compared her skin tones to those of a corpse. Newspapers published cartoons and satirical poetry mocking both artist and model. “When one stands 20 metres from the painting, it looks like it might be something,” wrote one critic in L'Événement. “But when one gets closer… one realises that it is only hideousness.” The New York Times’ critic (they sent critics to Paris then!) reported on the success of now-forgotten artists like Jean Béraud and Édouard Détaille, then added: “Sargent is below his usual standard this year. His portrait of the so-called beautiful Mme Gauthraut [sic]… is a caricature. The pose of the figure is absurd, and the bluish coloring atrocious.”

“Ma fille est perdue,” Amélie’s mother wailed to Sargent: my daughter is lost. She tried to have the painting pulled from the Salon, to no avail. See this in context, though. It’s 1884: two whole decades after Édouard Manet scandalised Paris with Le Déjeuner sur l’herbe (which the Salon refused to show) and Olympia (which they let in, to the intense distress of the established art world). Nudes were everywhere at the Salon. Sargent, however – with Amélie’s approval – had dared to showcase the confident, even predatory sex appeal of a high-society woman, and a married one at that. The little black dress made things worse, not better. And there was a further problem: thanks to the public scandal, Sargent suddenly realised that Amélie’s family was in no mood to buy. The portrait was not a commission, after all. He’d painted her on spec, betting that the notoriety of the Salon display would win him a high price and further commissions. He’d bet wrong. 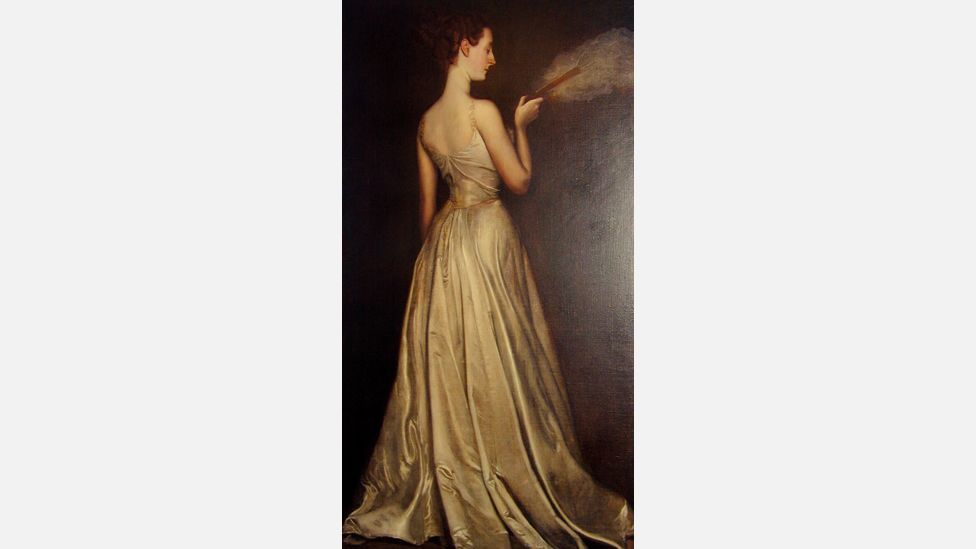 Sargent bailed for London, where he never again painted anything as daring. Gautreau stayed in France and tried to re-enter society. But where once she could count on high-ranking politicians or titans of finance to accompany her to the opera, now she was stuck with middling functionaries as escorts. She commissioned two other portraits of herself, both of which ended up at the Salon – and neither of which had any impact. As she grew older, living separately from her husband, she drifted out of the historical record, and details become sketchy. One biographer suggests, a little romantically, that in her later years she took all the mirrors down from her walls, and would only go outside at night.

Sargent held onto his portrait until 1916, a year after Amélie’s death in obscurity, when he sold it to the Met. He wrote to one of the museum’s curators: “I should prefer, on account of the row I had with the lady years ago, that the picture should not be called by her name.” Hence Madame X: a woman unknown, perhaps unknowable. Her name got scrubbed out, but her image has endured. Not long ago, Nicole Kidman posed for Vogue in a similar little black dress, her red hair pulled upward and her long arms bare. Elegant, distant, her torso a sinuous line, Kidman was channeling a painter’s vision of a woman. As for the woman she substituted, we can know her only in parts.