Loading
History
Mein Kampf: The world’s most dangerous book?
Share using EmailShare on TwitterShare on FacebookShare on LinkedinShare on Whatsapp 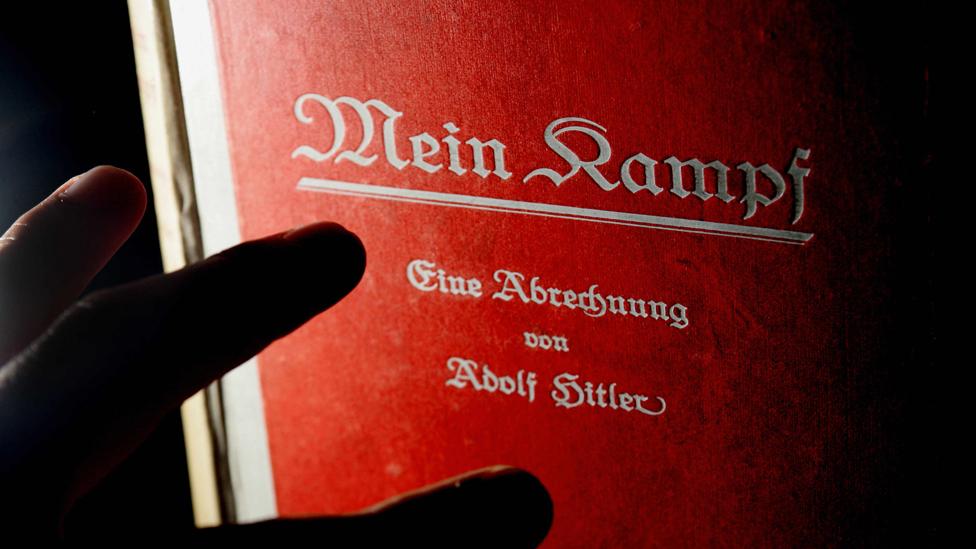 By Fiona Macdonald 12th January 2016
Adolf Hitler’s Mein Kampf fell out of copyright in Germany at the end of 2015. What will happen now that authorities can no longer control its publication?

“They wanted to replace the Bible.” Whispering in a hushed room of the Bavarian State Library, rare books expert Stephan Kellner describes how the Nazis turned a rambling, largely unreadable screed – part memoir, part propaganda – into a central part of the Third Reich’s ideology.

As Mein Kampf comes out of copyright – meaning that, in theory, anyone could publish their own editions in Germany – a programme on BBC Radio 4 explores what authorities can do about one of the world’s most notorious books.

According to the producer of Publish or Burn, which was first broadcast in January 2015, it remains a dangerous text. “The history of Hitler is a history of underestimating him; and people have underestimated this book,” says John Murphy, whose grandfather translated the first unabridged English language version in 1936.

“There’s a good reason to take it seriously because it is open to misinterpretation. Even though Hitler wrote it in the 1920s a lot of what he said in it, he carried out – if people had paid a bit more attention to it at the time maybe they would have recognised the threat.”

Hitler began writing Mein Kampf while in prison for treason after the failed 1923 ‘Beer Hall’ putsch in Munich, outlining his racist, anti-Semitic views. Once he gained power a decade later, the book became a key Nazi text, with 12m copies printed; it was given to newly married couples by the state and gold-leaf editions were displayed prominently in the homes of senior officials.

At the end of World War Two, when the US Army seized the Nazis’ publisher Eher Verlag, rights for Mein Kampf passed to the Bavarian authorities. They ensured the book was only reprinted in Germany under special circumstances – but the expiration of its copyright in December 2015 has prompted fierce debate on how to curb a publishing free-for-all.

“The Bavarians have used copyright to control republication of Mein Kampf… what happens next?” says Murphy. “This is still a dangerous book – there are issues with neo-Nazis, and a danger of people misinterpreting it if it’s not put into context.”

Some question whether anyone would want to publish it – according to the New Yorker, “It is full of bombastic, hard-to-follow clauses, historical minutiae, and tangled ideological threads, and both neo-Nazis and serious historians tend to avoid it.”

Yet the book has become popular in India with politicians who have Hindu nationalist leanings. “It is considered to be a very significant self-help book,” Atrayee Sen, a lecturer in contemporary religion and conflict at the university of Manchester, told Radio 4. “If you take the element of anti-Semitism out, it is about a small man who was in prison who dreamt of conquering the world and set out to do it.”

The removal of context is one of the fears of those opposed to republication. In Publish or Burn Ludwig Unger, spokesman for the Bavarian Ministry of Education and Culture, says: “The result of this book was that millions of people were killed, millions were maltreated, whole areas were overrun with war. It’s important to keep this in mind and you can do that when you read certain passages with appropriate critical historical commentary.”

When the copyright expired, the Institute for Contemporary History in Munich brought out a new edition of Mein Kampf that combines the original text with a running commentary pointing out omissions and distortions of the truth. So far, it has received orders for 15,000 copies against a print run of 4000. “The edition unmasks Hitler's false allegations, his whitewashing and outright lies,” says the head of the Institute, Andreas Wirsching. Some victims of the Nazis oppose this approach, and the Bavarian government withdrew its support for the Institute after criticism from Holocaust survivors.

Yet suppressing the book might not be the best tactic – an op-ed in the New York Times argued that: “The inoculation of a younger generation against the Nazi bacillus is better served by open confrontation with Hitler’s words than by keeping his reviled tract in the shadows of illegality.”

The co-editor of the critical edition, Christian Hartmann, told Reuters: “The book is not only a historical source, it's a symbol. And we wanted to dismantle that symbol once and for all.”

Murphy acknowledges that a global ban on the book is impossible. “This is more to do with the Bavarian authorities making a point, rather than really being able to control it. They have to take a stand, even if in the modern world it won’t prevent people getting access.”

According to Publish or Burn, the state plans to prosecute using the law against incitement to racial hatred. “From our point of view Hitler’s ideology corresponds to the definition of incitement,” says Ludwig Unger. “It’s a dangerous book in the wrong hands.”

Mein Kampf: Publish or Burn? was first broadcast on Radio 4 in January 2015.

This story originally ran on BBC Culture in January 2015. It has been updated for the copyright expiration at the end of 2015.