Loading
Sacred Secrets
The Templo Mayor: A place for human sacrifices
Share using EmailShare on TwitterShare on FacebookShare on Linkedin 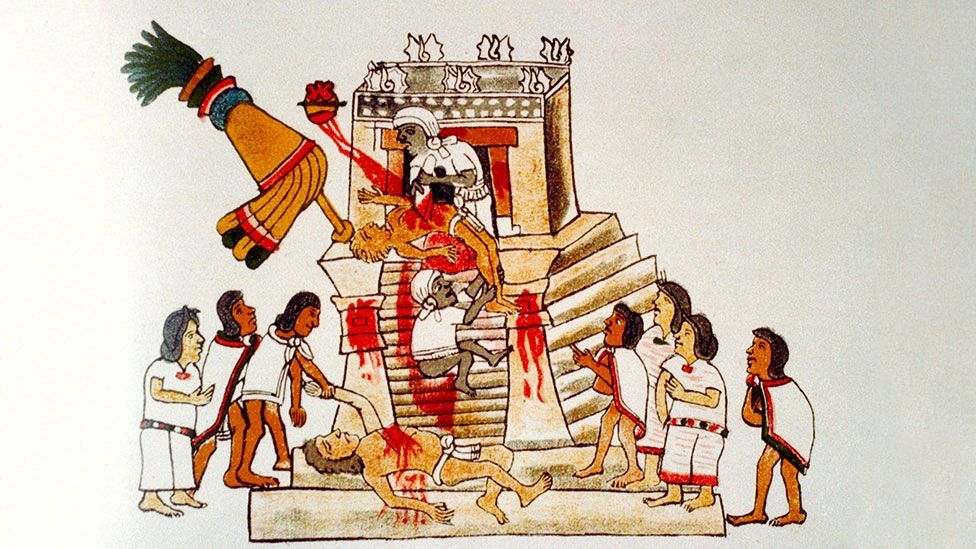 The opening ceremony of the sixth Great Temple of Tenochtitlan on 19 December 1487 was quite unlike one a modern head of state or religious leader would ever expect to attend. Warriors dressed as eagles guarded the route to an imperious, stepped pyramid. Drums beat to a hypnotic rhythm. Near naked men joined hands and sang. The atmosphere was festive. Menacing, too.

At the climax of the ceremony, prisoners of war were taken to the top of the steep steps of the pyramid leading to two shrines. Held down, the victims’ abdomens were sliced open by high priests wielding ceremonial knives, and their hearts – still beating – were raised to the spirits above and the crowd in the sacred precinct below.

The lifeless bodies of those sacrificed were then kicked down the stairs, and as one followed another, these flowed with blood, bright red against the white of the temple walls. Over the four days of the opening ceremony, some 4,000 prisoners were killed to satisfy the Aztec gods and perhaps to frighten anyone who even began to think of challenging this harrowing, yet compelling American empire. 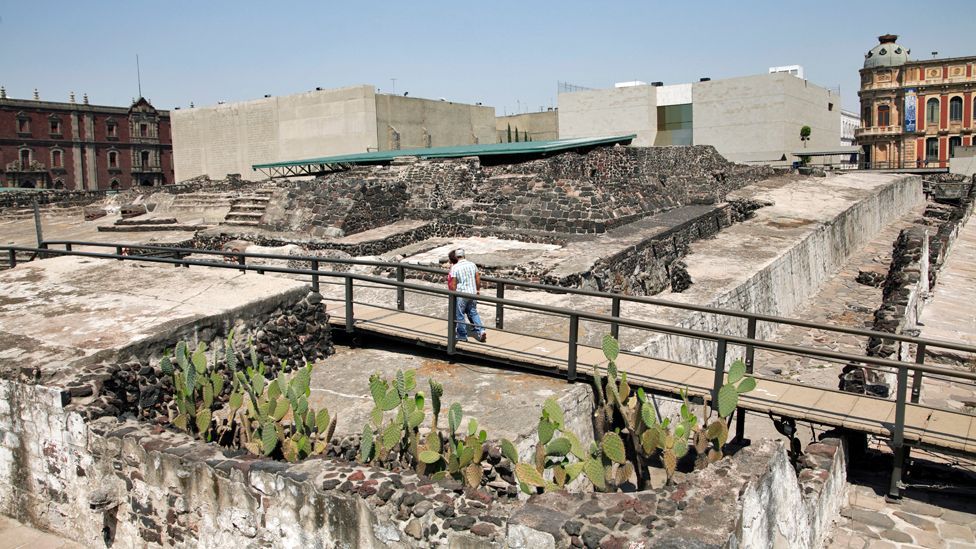 This, more or less, is what happened in what is now Mexico City shortly before Christmas 1487 and less than five years before Christopher Columbus and his expedition set sail from Spain for what they thought would be India and proved to be a “new world” on the other side of the Atlantic Ocean.

Europeans at the time knew nothing about the Aztecs and the origins of their legendary seven tribes remain unknown today. The people who called themselves both Tenochla and Mexica may have migrated to Mexico from California in the late 11th Century. What we do know is that they found their way to the Valley of Mexico and in 1325 founded their city Tenochtitlan on a marshy island. Like Venice, this protected them from enemies in a strange land. Like Venice, too, Tenochtitlan was built on wooden piles driven deep below water, and like Venice again, it became a city of canals, wondrous buildings, elaborate festivals, imperial ambition and mystery. 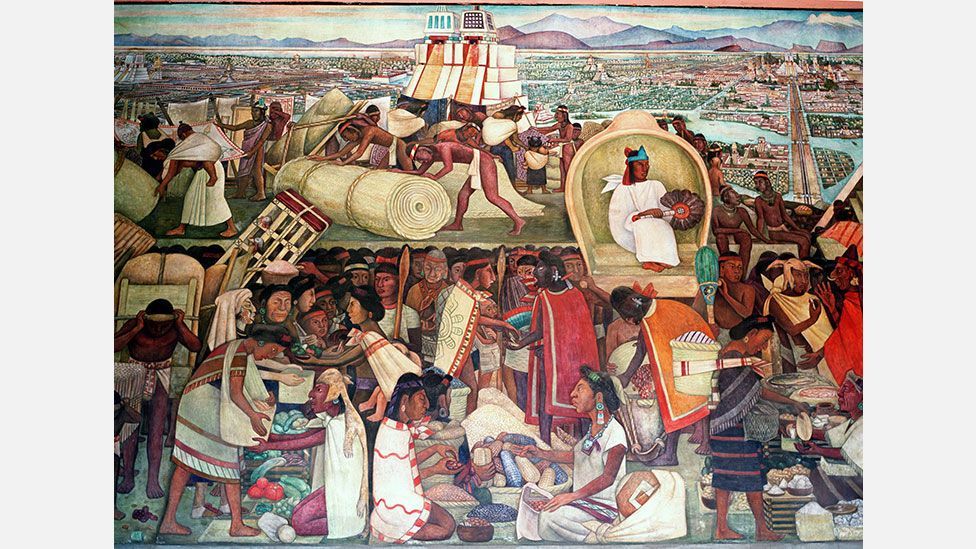 In 1945 Diego Rivera painted this mural of Tenochtitlan, the Aztec city that in the early 16th Century was bigger than any in Europe (Danita Delimont/Alamy)

Aztecs spent lavishly on religious buildings. Their gods were fierce and had to be appeased with human hearts and blood. Work on the principal temple – Huei Teocalli in the Aztec’s Nahuatl language, or Templo Mayor in Spanish – began soon after the foundation of Tenochtitlan. It was to be rebuilt six times before the arrival of the conquistador Hernán Cortés in 1519. Each time it was rebuilt it grew in scale. It retained, though, its essential form, that of an imposing stepped pyramid incorporating twin stairs leading to the shrines of the deities Huitzilopochtli (god of war) and Tlaloc (god of rain and fertility). A lower circular temple devoted to the feathered serpent god Quetzalcoatl, who predated the Aztecs, faced this main structure.

By 1497, when the sixth temple had been completed, the Aztec king Ahuitzotl had doubled the size of his empire. The Aztecs and their world of rational urban planning, sophisticated sanitation, running water, daily baths, dominant temples and insatiable human sacrifice seemed set to last forever.

And yet what Hernán Cortés saw in 1519, newly arrived from Cuba during the reign of the Aztec king Moctezuma, was the seventh and last recreation of the Templo Mayor. What Cortés saw was certainly impressive. We know from the Spaniards’ own accounts that this was the largest of 78 buildings in the sacred precinct at the heart of Tenochtitlan.

Hidden behind a curtain in one of the shrines, Bernardino de Sahagun, a Franciscan friar, glimpsed the idol of Huitzilopochtli. It was made from seeds bonded with honey and human blood. Each year, the idol was dressed in gorgeous robes and wearing a gold crown was shown to the people at a festival that ended with their eating this image of their god of sun and war. 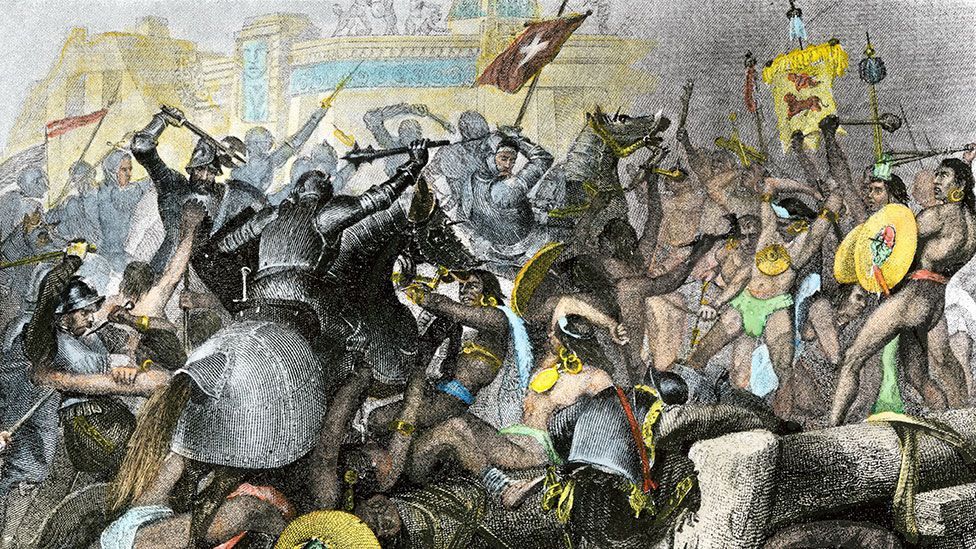 Cortés was enthralled by such experiences, by the sheer scale of Tenochtitlan – with a population of approximately 250,000 it was far bigger than any contemporary European city – and by its generous stocks of gold. However fierce their eagle warriors and blood hungry gods, the Aztecs fell prey quickly to Spanish trickery, firearms and disease. Welcomed at first as Quetzalcoatl himself, Cortés scythed a remarkably easy and unsparing path through the Aztecs. When Pedro de Alvarado, his second in command, heard of a plan to retaliate, he trapped thousands of unarmed Aztec nobles in the sacred precinct during a religious ceremony and had his men cut them to pieces.

And that was the end of the Aztec Empire, of Moctezuma, Tenochtitlan and the Templo Mayor. Surviving Aztecs – many of those not put to the sword died of smallpox shipped from Spain – were expelled from their city, which the conquistadores then demolished. A Catholic cathedral was built on top of what had been the Templo Mayor and its sacred precinct.

Life marched on as New Spain grew and turned into Mexico. Tenochtitlan and the Templo Mayor were all but forgotten, as were Aztec gods and culture. Early excavations made by the pioneering Mexican archaeologist Leopold Batres in the late 19th Century were cursory, while further digs made between then and World War Two were seen as little more than a nuisance by those living in the elegant residential streets of this central quarter of Mexico City. Public excitement and systematic excavation of the site only really began in the final quarter of the 20th Century. 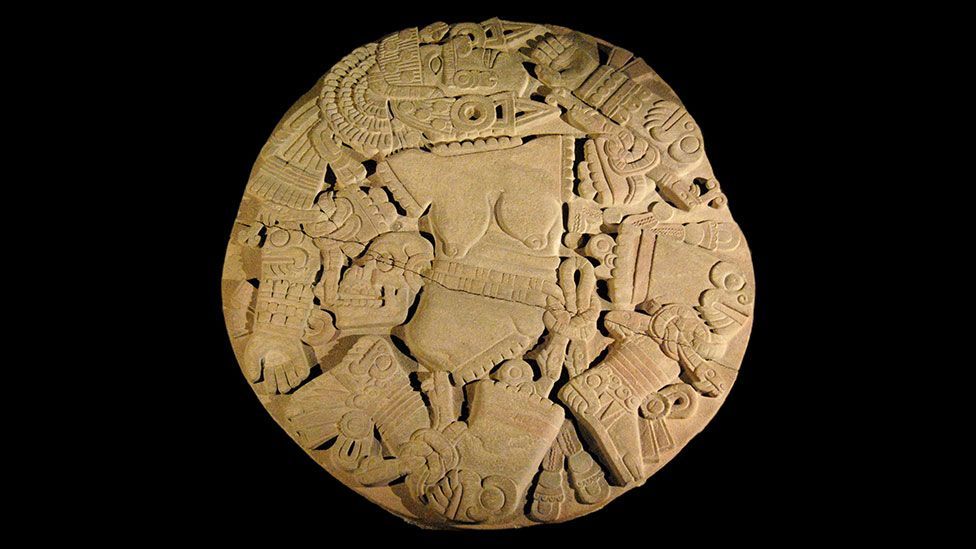 The discovery of this stone disk depicting the Aztec moon goddess Coyolxauhqui in 1978 prompted the excavation of the rest of the Templo Mayor (Miguelao/Wikipedia/CC BY-SA 2.0)

In 1978, workmen uncovered a huge, eight-tonne sculpted stone disk depicting the scattered limbs of the Aztec moon goddess Coyolxauhqui. A presidential decree gave permission for the happily named archaeologist Eduardo Matos Moctezuma to uncover what his team could of the temple. This involved the controversial destruction of colonial houses, but thousands of Aztec objects were found prompting the building of the Templo Mayor Museum designed by the Mexican architect Pedro Ramírez Vázquez, a modernist who fused pre-Columbian forms into his acclaimed works. 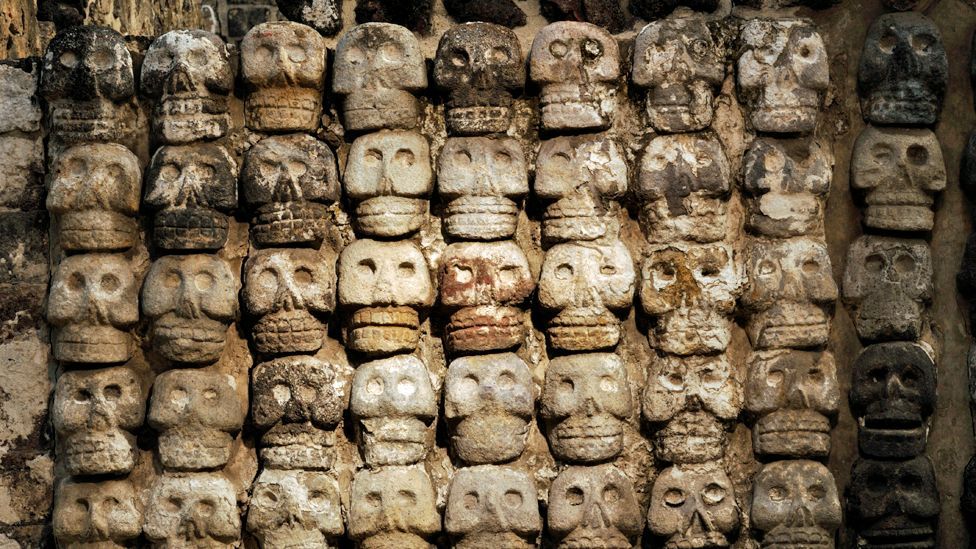 The Templo Mayor Museum, located next to the actual ruins, contains artefacts excavated from the temple, like this ‘wall of skulls’ (Corbis)

Today, the archaeological quest for the Templo Mayor continues and the area has been designated a Unesco World Heritage Site. Much has been discovered: sections of the temple and its several layers dating back to the early 14th Century, palace rooms and their built-in baths, the House of the Eagle Warriors, a school for priests and wonderful writhing sculptures of sacred snakes and serpents.

Even then, so many treasures, along with the tantalising story of a people, a culture and religion that appear to have vanished in an instant in the early 16th Century, remain buried beneath the buildings, monuments and churches of modern day Mexico City. Because of this – although ingenuity and new archaeological techniques will surely help in future – our knowledge of the Aztecs will remain frustratingly incomplete for many years to come. The Aztec people still exist, yet their faces blend into the crowds of Mexico City and, folklore aside, memory is not enough to recall the worlds of Ahuitzotl, Moctezuma, Tenochtitlan and the haunting rituals that took place in and around the Templo Mayor 500 years ago.