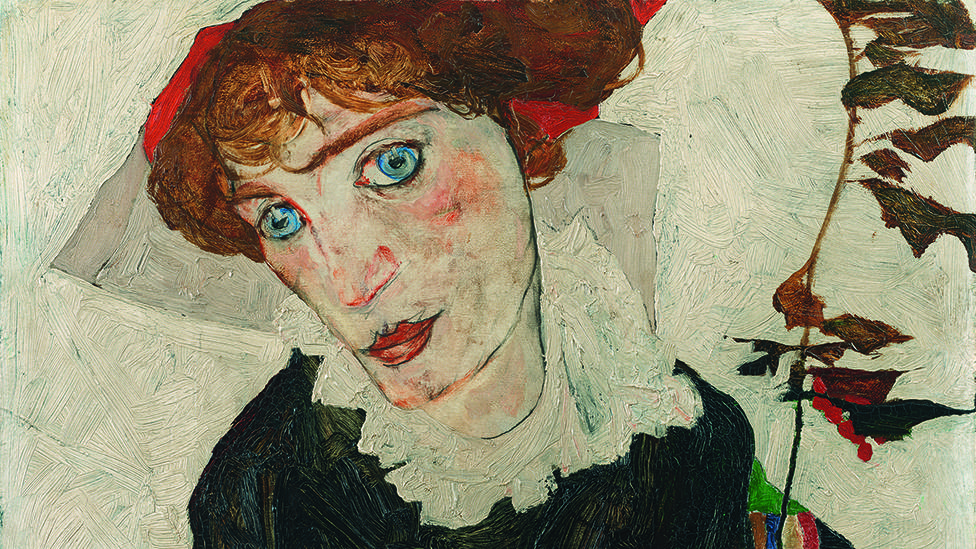 By Kimberly Bradley 27th February 2015
Egon Schiele’s portraits of his muse and love Wally Neuzil are among the artist’s most famous works – but who was she really? Kimberly Bradley investigates.
A

A woman’s clear blue eyes look back at the viewer – or  is it the painter? – with a penetrating yet somehow compassionate gaze. She is dressed in black, a white lace collar encircles her neck. Her auburn hair frames a face turned a bit to the left as if to tease or beseech; the corners of her mouth turn barely upward.

Her hypnotic eyes and tawny hair are familiar, but the life of the woman who stood by Schiele from 1911 until 1915 remains in large part a mystery. Who was Wally Neuzil? This question is at last addressed by the exhibition Wally Neuzil and her Life with Egon Schiele at the Leopold Museum in Vienna, which runs from 27 February to 1 June 2015.

Wally Neuzil was born in August of 1894 in the Lower Austrian town of Tattendorf; her background was firmly lower-middle class. Her father Josef Neuzil, from a town in what is now the Czech Republic, was a grammar school teacher for a time, a position that, if not well-paid, was at least well-regarded. After her father’s early death, Neuzil apparently moved with her remaining family to Vienna in 1906 and met Schiele in 1911 at the age of 16. The story goes that she was Gustav Klimt’s model and perhaps even mistress, but any alliance to the elder painter remains unprovable hearsay. 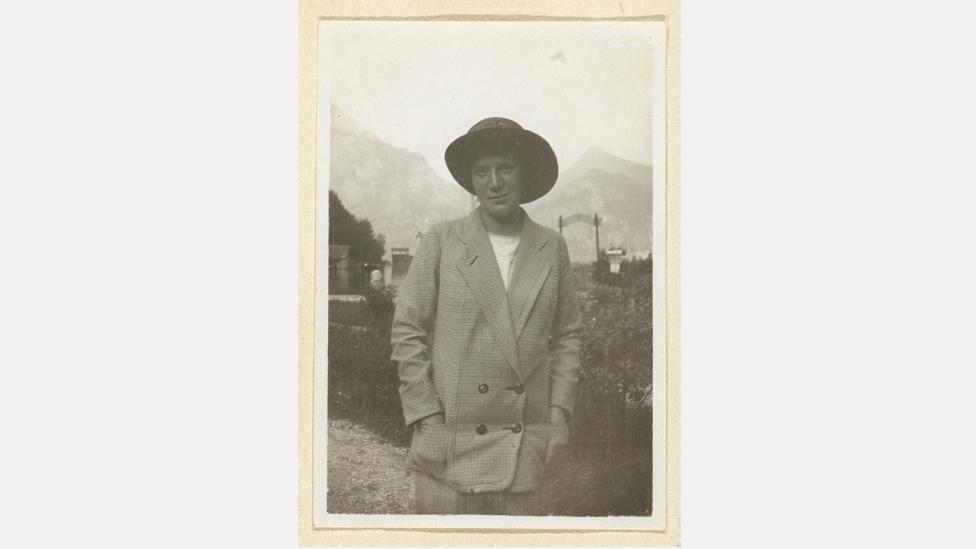 A photograph of Wally Neuzil at Gmunden, near Lake Traunsee, from July 1913 (Wien Museum)

“We tried to find as closely as possible what she was like,” explains curator Birgit Summerauer, who led an effort to trace Neuzil’s life by visiting former homes and poring over century-old public records. Research found that Neuzil had three younger sisters, and no fewer than 16 registered addresses in Vienna – the frequent moves indicate that the family was poor. Also of note is that Neuzil usually registered herself as a salesgirl, cashier, or storefront mannequin, but never as an artist’s model.

And this is with good reason. In the 20th Century’s first decade, Vienna’s population was growing explosively, offering new opportunities for women as well as for libertine hedonism. Yet Austria under the Hapsburg Empire was still bound by rigid social structures – class differentiations were stark. “There was growing freedom for lower and lower-middle-class women, but upper-class women had far more constricted lives” says Peter Vergo, an expert on Austrian and German art and author of Art in Vienna 1898-1918. At the same time, financial pressures for the lower classes pushed some young women into moonlighting, so to speak. “At the time there was a blurred, messy dividing line being an artist’s model and being a prostitute,” explains Vergo. “Rather often, Klimt’s and Schiele’s models were doubling as prostitutes.” In the eyes of the bourgeoisie, there wasn’t much difference. 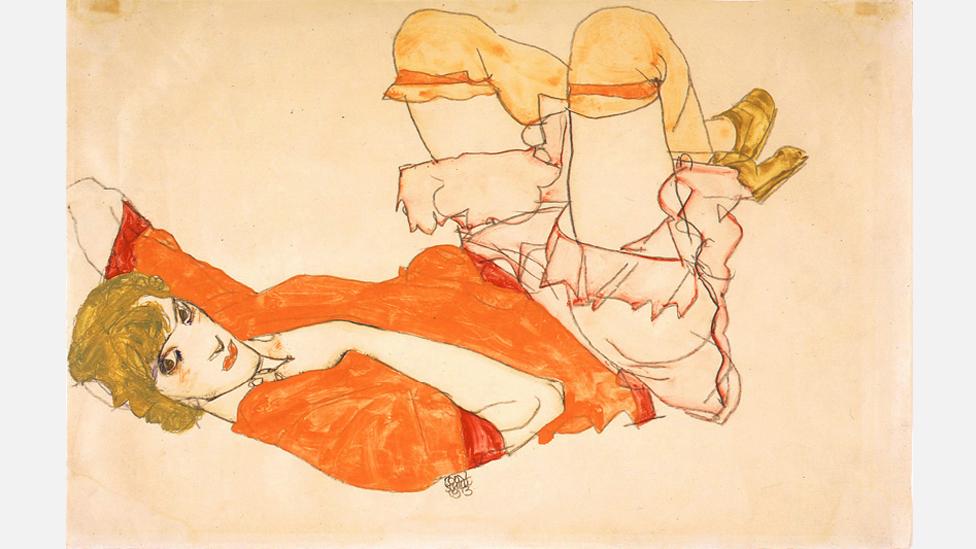 Neuzil was probably not a Grabennymphe (a “Graben nymph,” named for Vienna’s central thoroughfare and its thousands of slightly higher-class streetwalkers). It is also unclear how Schiele and Neuzil met in 1911. Perhaps Klimt sent her to his protegee, who was 21 at the time. Or perhaps Schiele approached Neuzil on the street or in Schönbrunn Park, as he often did to recruit his many models. Neuzil at first kept an apartment and received payment for her modelling work, which indicates a certain distance. But in 1912 their artist-model relationship deepened – something most art historians agree is evident in Schiele’s work. “She’s not just a model. She looks back. She motivated his self-reflection, and was a catalyst for his work,” says Diethard Leopold, son of the late Rudolf Leopold whose extensive collection of fin de siècle Viennese painting comprises a major portion of the Leopold Museum’s holdings. “We try to make that point.”

The exhibition’s approximately 200 objects, including 50 Schiele works, allow viewers to revisit the artist’s masterpieces, ponder the situation of Viennese women a century ago, and learn about Austrian art history’s most mysterious muse. Visitors might be surprised at Wally’s head for business – it was she who looked after many of Schiele’s affairs, keeping up with collectors and gallerists, managing administrative duties, paying rent and delivering papers and paintings. 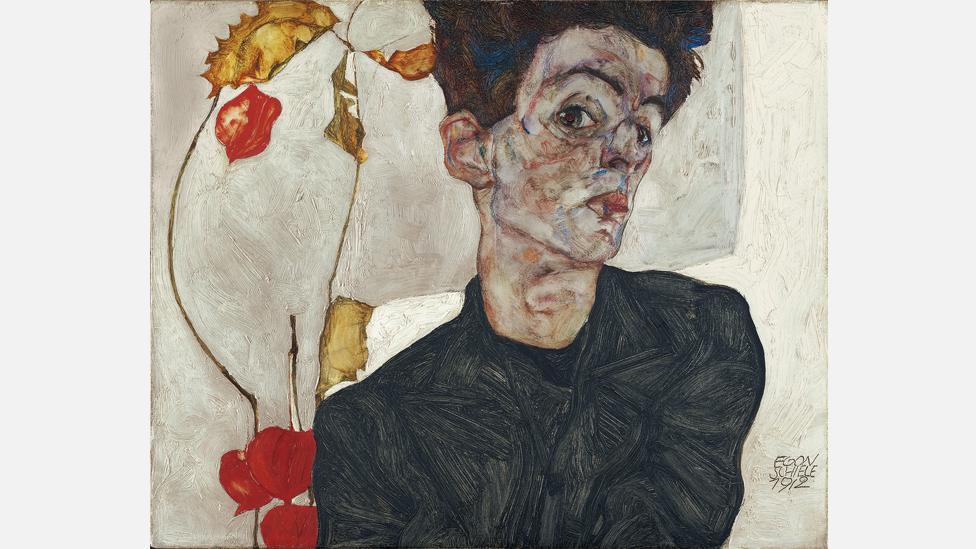 Less surprising was her loyalty. She posed tirelessly – keeping a keen eye on his other models, and sometimes posing with them – and accompanied Schiele on his ill-fated work trips to the countryside. The artist found the city oppressive and decamped to the Bohemian town of Krumau and then Neulengbach, a village near Vienna. In both towns the couple’s unmarried status and nonconformist behavior ruffled feathers; in 1912 in Neulengbach, Schiele spent nearly a month in prison for allegedly seducing and kidnapping a minor. Neuzil delivered food and art materials as he awaited release (he was ultimately charged with displaying pornographic materials in the presence of minors). Shortly afterwards, Schiele painted Self-Portrait with Physalis and Portrait of Wally; the works, considered a pair, represent a turning point and maturation. “If you look at Schiele’s portraits until that date, there’s a lot of eroticism, but there’s little in terms of true psychological penetration,” says Vergo. “What Portrait of Wallyreally documents is Schiele waking up to the reality of another person. It’s a real portrait of a real person.”

Death and the maiden

Neuzil and Schiele’s relationship famously came to an abrupt end in April 1915 when Schiele proposed marriage to Edith Harms – one of two more socially acceptable sisters who lived across the street from Schiele’s Vienna studio, and who had been introduced to the artist by none other than Neuzil. They wed in June of the same year. Schiele attempted to cut a deal with Neuzil requiring her to take an annual holiday with him (Edith was to stay at home) but Neuzil refused. Schiele never saw her again.

Decades of speculation and scorn surround Schiele’s blunt early-1915 note to his friend, the art critic Arthur Roessler (“I’m planning to marry – most advantageously – probably not Wally”) and so blatantly ‘marrying up’. But the curators discovered the situation was more complex than this. “We have this picture of a brutal breakup, and that Wally was never good enough,” says Leopold. “But in 1913 the two went on holiday to Traunsee [a lake near Salzburg] with Roessler. We found the private photo album. And after the breakup we can prove that she still had contact with his collectors and owned Schiele works. She must have been more accepted than previously thought.” 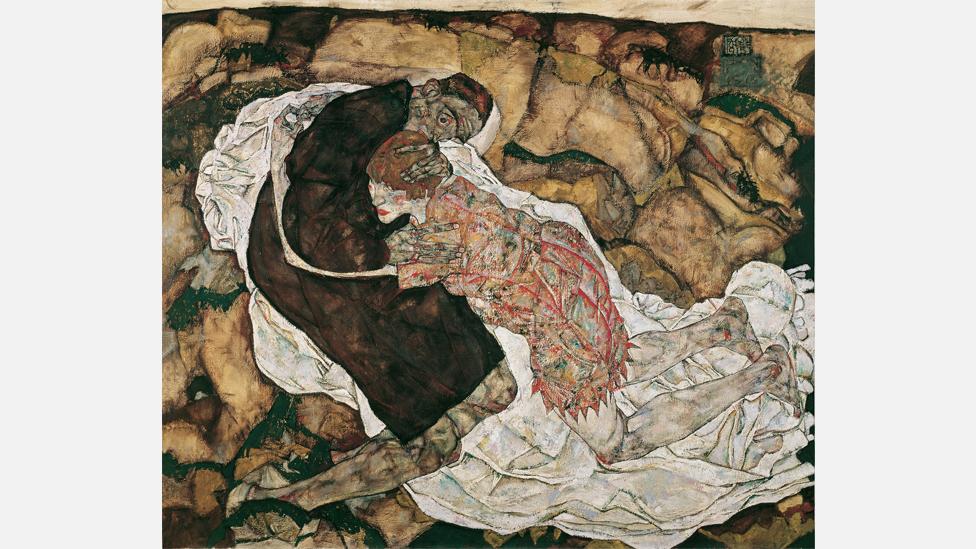 Egon Schiele, 1915. Death and the Maiden (Courtesy of the Belvedere Museum, Vienna)

Each of them clearly struggled to find meaning in an alliance that was very sexual, highly spiritual, and artistically transformative. Schiele’s poignant Death and the Maiden (1915-16) is considered an homage to his muse; visual evidence of his inability to let go. Yet Neuzil succeeded in moving on, training as a nurse. “It’s interesting that she was at the bottom of society, and a couple of years later she was a nurse in the First World War,” says curator Stefan Pumberger. “This turned out to be very heroic. She made her way into society even after the breakup.” Her story  – a poor small-town girl makes good – is indeed decades ahead of its time.

The exhibition’s unusual personal artifacts show the depth of the complicated affair. There’s a drawing from a hotel guestbook in the Wachau valley where Schiele and Wally spent time in 1913; letters between Edith Harms and Schiele; images of Vienna street workers; photographs of nurses working through the war; even a 1915 letter that Neuzil wrote to painter Felix Harta, wondering why Schiele hadn’t sent her money (leaving us to wonder just how long the two remained in indirect contact.)

Sadly, their young lives were cut short. While working in Dalmatia (now part of Croatia), Neuzil contracted scarlet fever and died in 1917 at the age of 23. In 1918, a pregnant Edith Schiele succumbed to the Spanish flu; Egon died of the same cause three days later. He was 28. The multiple story lines of Egon and Wally – erotic exploration, artistic inspiration, obsession, loyalty, love,betrayal and service, all in the eye of a societal and geopolitical storm – continue to inspire. So does the powerful beauty, and beautiful power, of the many drawings and paintings of the woman sometimes described as Schiele’s ‘shadow’. Here, she at last shines in her own light.