Loading
Sacred Secrets
The Great Gate of Ishtar: A door to wonder
Share using EmailShare on TwitterShare on FacebookShare on LinkedinShare on Whatsapp 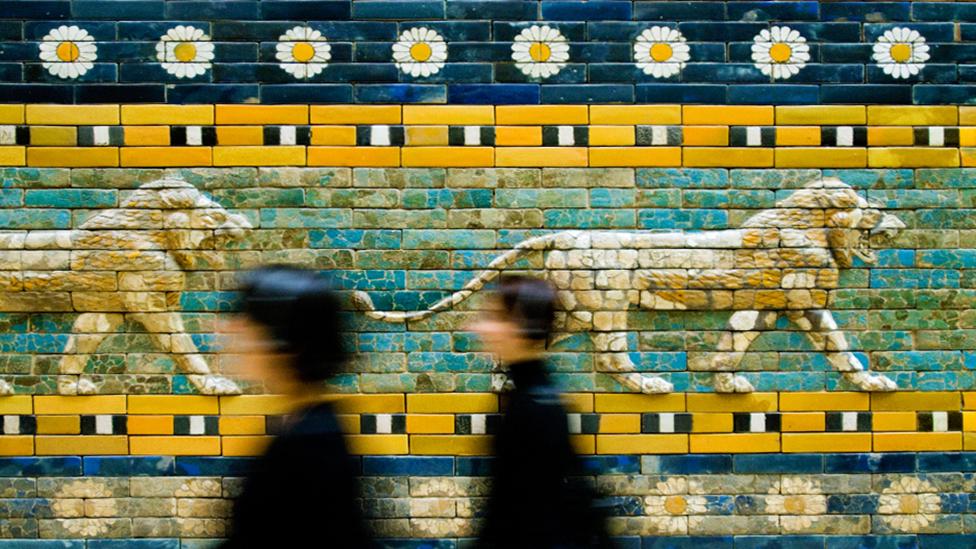 By Amanda Ruggeri 2nd March 2015
The Great Gate of Ishtar which stood at the entrance to Babylon has inspired awe since the 6th Century BC. Amanda Ruggeri finds out why.
W

When Antipater of Sidon, the Greek poet of the 2nd Century BC, compiled the seven wonders of the ancient world, only one city claimed two sites: Babylon. Yet the two he listed – the Hanging Gardens and the city’s wall – were just a couple of the many wonders to be found in the magnificent ancient city.

Located between the Tigris and Euphrates in what today is Iraq, Babylon was largely rebuilt by the its king Nebuchadnezzar II in the 6th Century BC, using vibrant glazed bricks in blues, reds and yellows. Ancient texts from Herodotus to the Old Testament describe its overwhelmingly opulent temples, shrines and palaces. At its peak, with more than 200,000 inhabitants, it was the largest metropolis in the world. 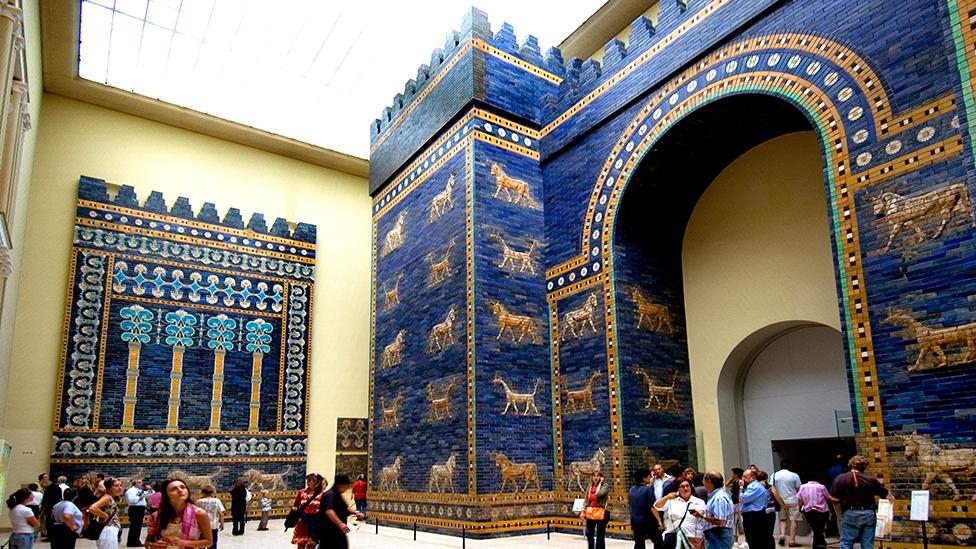 Symbolic of all of that splendour was a visitor’s first introduction to the city: the monumental Gate of Ishtar, built in 575 BC out of enamelled bricks, in cobalt blues and sea greens, decorated with reliefs of 575 dragons and bulls. When German archaeologists began excavating the city in 1899, a surprising amount of that millennia-old magnificence remained – including the gate. It was in the century following, however, that much of the ancient city’s magnificence would become most at risk.

Even before excavations began, head archaeologist Robert Koldewey thought he knew what he would find. Near the city’s castle in June 1887, he wrote, he had come across “brightly coloured fragments” of the enamelled bricks that were believed to have made up the city wall. Two years later, the digging began – and the ancient city began to reveal itself. “The finely coloured fragments made their appearance in great numbers, soon followed by the discovery of the eastern of the two parallel walls, the pavement of the processional roadway, and the western wall, which supplied us with the necessary orientation for further excavations,” he wrote in his 1914 account of the discoveries, The Excavations at Babylon.

In 1902, his archaeologists unearthed the Gate of Ishtar, the most potent symbol of ancient Babylon’s magnificence. The gate was exactly where they expected it to be, marking the entrance to the city at the beginning of the Procession Street, the main thoroughfare used for parades during new years’ celebrations. “With its walls which still stand 12 metres high, covered with brick reliefs, it is the largest and most striking ruin of Babylon,” Koldewey wrote. 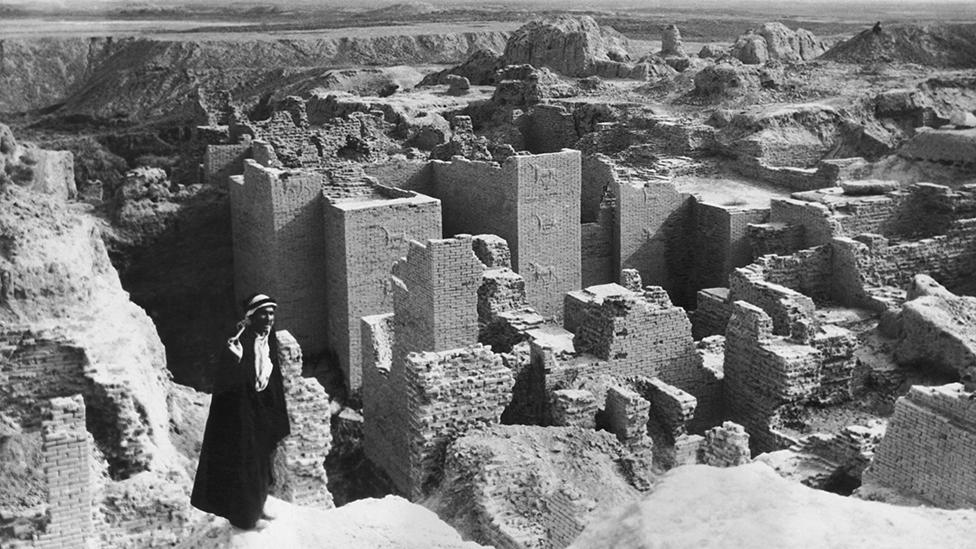 In case any doubt remained about the gate’s construction, there was an inscription in limestone in the voice of Nebuchadnezzar: “I placed wild bulls and ferocious dragons in the gateways and thus adorned them with luxurious splendour so that people might gaze on them in wonder.” Now, thanks to Koldewey’s team, the people of a new age could look on the gate in awe. “This particular gate – which was one of eight gates to the city, built in one of its latest and, one would have to say, its most glorious historical phases – really thrilled everybody,” says Peter Machinist, professor at Harvard University’s Department of Near Eastern Languages and Civilizations. “Even in antiquity, it already came to be a kind of metonymy for the entire magnificence of the reconstruction of the city of Babylon, which Nebuchadnezzar engineered. And certainly, after it was set up, it became a major tourist attraction.”

After its discovery, it became one again. The German archaeologists excavated as much as they could but when World War One came in 1914, the dig was shut down. Four years later, the conflict came to an end and the Ottoman Empire – Germany’s ally in the war, which ruled the lands where the gate was discovered – collapsed.   But the Germans were still able to negotiate with the occupying British forces to ship some of their finds to Berlin, including the Gate of Ishtar. What was put on display in the 1920s was not, and still is not, the entire gate: it was too large. Even so, the section brought the magnificence of ancient Babylon to life in a way that hadn’t happened in thousands of years.

After World War Two, another large excavation took place, this one led by Italian archaeologists, says Machinist. And then came Saddam Hussein, who took power in 1979. “He got this notion that he was not simply a Sunni Muslim, but the lineal descendant of these Babylonian heroes of the past. So he started to reconstruct the site in the 1980s,” he says. On the ancient foundations, Hussein built copies of the gate and of Nebuchadnezzar’s palace; in the style of the Babylonian king, he included inscriptions about his own work. 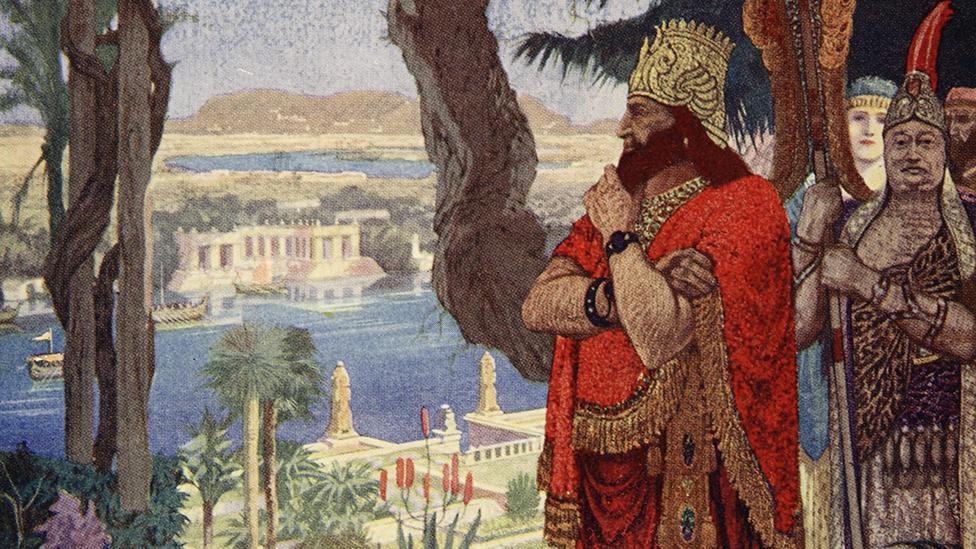 The parallel Saddam was trying to make with Nebuchadnezzar was not all that surprising. A military mastermind (or scourge, depending on your perspective), Nebuchadnezzar devastated the Phoenician city of Sidon , defeated Egypt’s armies and, in 587 BC, sacked Jerusalem’s Temple of Solomon; Saddam’s adventures in Kuwait and Iran are well known.

Each time Nebuchadnezzar’s soldiers moved into new territory, they enslaved the population and plundered its treasures. And with his newfound manpower and loot, Nebuchadnezzar rebuilt the Babylonian capital. He finished his father’s palace, built the Hanging Gardens for his wife and build Babylon’s walls, partly out of caution about an old prediction by the 8th Century BC Judean prophet Isaiah that the city would fall. 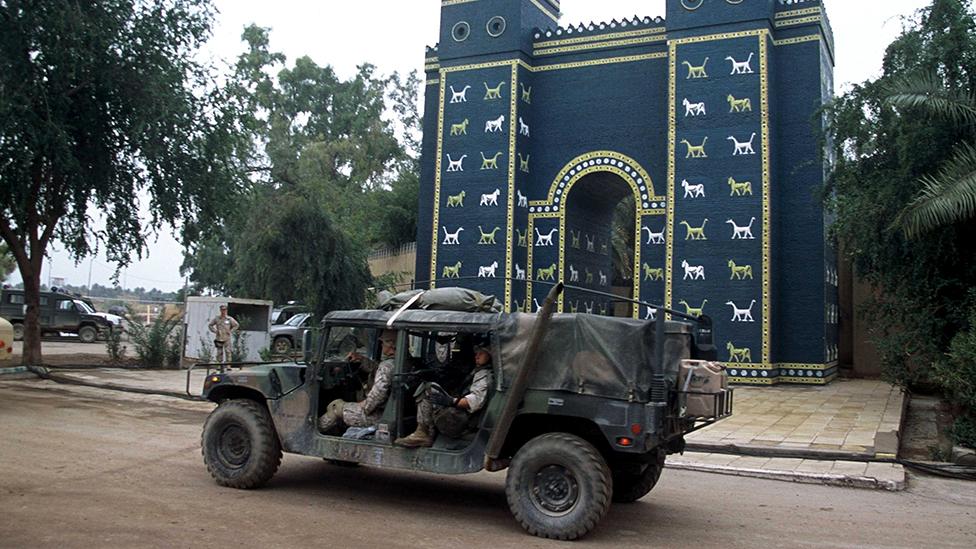 US and Polish troops used the archaeological site as a base after the 2003 invasion of Iraq, causing extensive damage (Rex Features)

But just as ancient Babylon ultimately fell so too would Saddam’s Iraq, causing concern for the conservation of the country’s ancient artefacts. In 2003 and 2004, American and Polish troops turned the area of the ancient city’s archaeological site, including the Gate of Ishtar, Processional Way and Temple of Ninmah, into a military base, complete with helicopter pad. According to a study by the British Museum, the damage was extensive: some 300,000 sq m (4,000 acres) of the archaeological site had been covered with gravel, which also contaminated unexcavated areas; trenches had been dug into archaeological mounds; a heavy vehicle had driven on, and broken the pavement of the Processional Way; nine dragon figures on the Gate of Ishtar – whose foundations with their moulded, animal-decorated bricks remain in Babylon – had been damaged. After some 2,600 years of wars, plunder and neglect, it seemed, the site had met one of its surest enemies.

Today, it is too soon to tell what will happen with the site and its preservation. But in the meantime visitors to Berlin’s Pergamon Museum, which has the gate’s largest section on display, can gaze on it in wonder, just as Nebuchadnezzar intended.