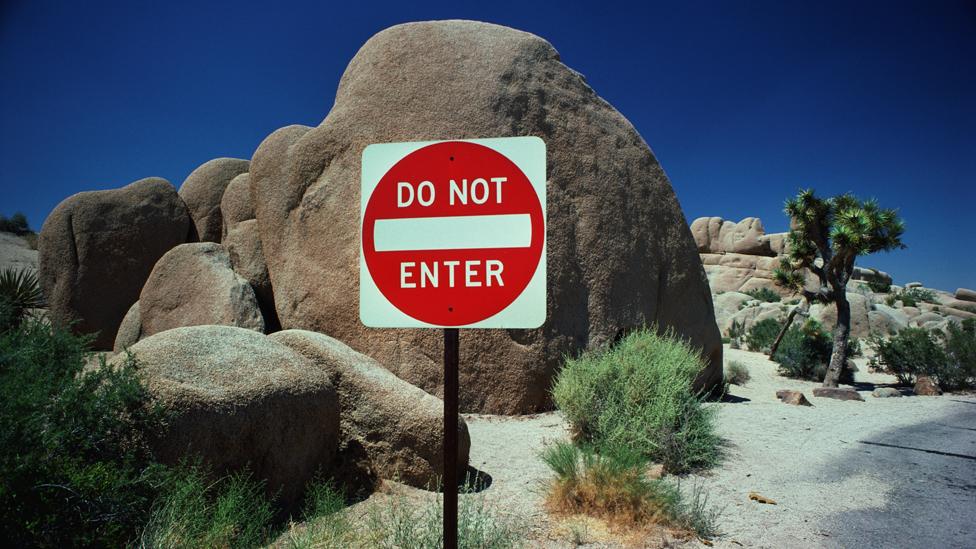 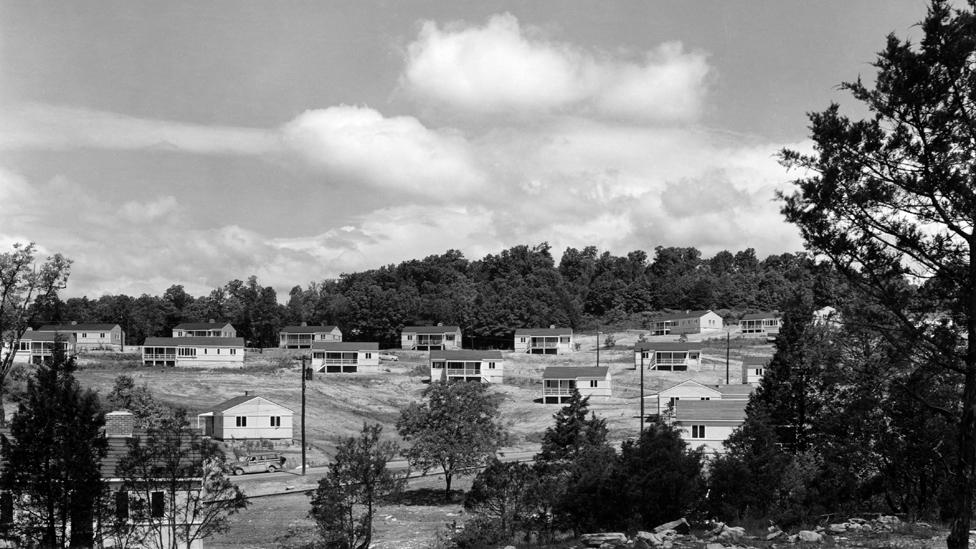 In 1942, a patch of isolated farm land in Tennessee was chosen as a site for a project so secret [it has been credited as](http://www.wilsoncenter.org/event/the-manhattan-project-and-its-cold-war-legacy) “the birth of the national security state”. On the land, US Army engineers built a town – given the innocuous name of Oak Ridge – according to [a master plan by the architectural firm Skidmore, Owings and Merrill (SOM)](http://www.som.com/projects/oak_ridge_new_town_master_plan). It didn’t appear on any maps. The entire town, with a population of 75,000, was fenced in and secured by armed guards – because alongside prefabricated homes, schools, and shops, there were facilities designed to refine uranium ore. Part of the Manhattan Project, which created the first atomic bombs during World War II, [Oak Ridge has just been given National Park status](http://www.latimes.com/travel/deals/la-trb-manhattan-project-national-historic-park-20141226-story.html). It was one of the architects’ more unusual projects: they had to plan their secret city with no more than an aerial contour map to work from. Civil engineer Walter G Metschke, who worked on the project, [wrote in his memoir](http://digital-libraries.saic.edu/cdm/compoundobject/collection/caohp/id/8498/rec/1): “I was told that a housing project was to be built somewhere, we didn’t know where, and that we were invited to submit a preliminary plan for three thousand single-family units… We had positively no notion as to why we were building a town with a population of seventy-five thousand.” (Credit: Chicago History Museum/Getty Images) 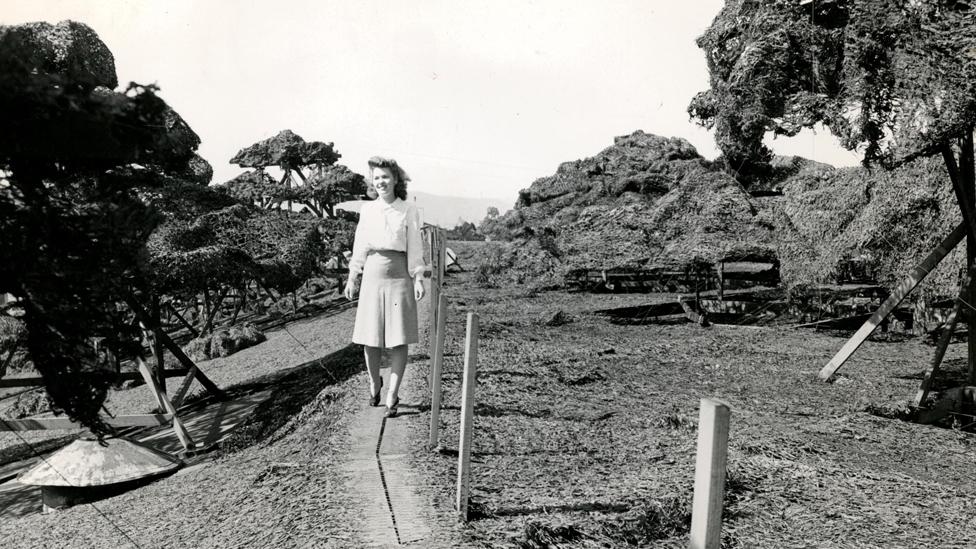 Another military project called on Hollywood for its knowhow in set building. After the US entered World War II, aircraft bases and factories along the Pacific coast were disguised to look like suburban towns. Under the command of [Colonel John F Ohmer](https://books.google.co.uk/books?id=ZDZ1f44NvJcC&pg=PA116&lpg=PA116&dq=Colonel+John+F+Ohmer&source=bl&ots=7dwHHJXPxS&sig=S9Ei7Esgxb2t6zJ8DKDMIaMFWmM&hl=en&sa=X&ei=Uv_qVJaYJMGrNqCFgfAG&redir_esc=y#v=onepage&q=Colonel%20John%20F%20Ohmer&f=false), the 26-acre Boeing plant in Seattle was covered with porous camouflage netting. Hollywood set designers, art directors, carpenters and prop men created burlap houses and chicken-wire lawns on top of industrial rooftops so that the bomber manufacturing facility was disguised from the air. Chimneys were hidden in fake trees and fountains and air ducts were disguised as fire hydrants. At the Lockheed-Vega plant at Burbank, California, workers even maintained an illusion of normal neighbourhood activity, relocating rubber cars and taking down washing from fake clotheslines, replacing it at scheduled times. (Credit: The Boeing Company) 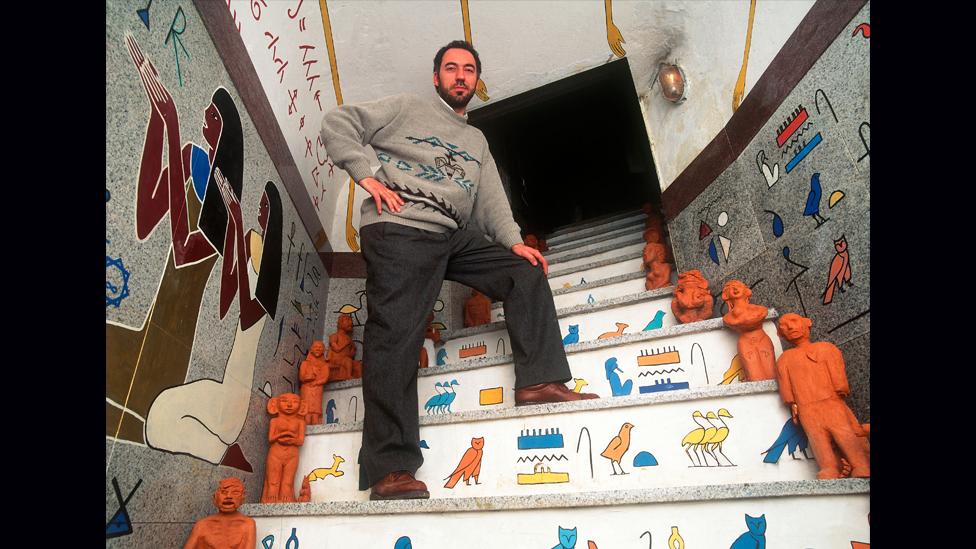 In 1960, aged ten, Oberto Airaudi began having visions of what he claimed was a past life in a utopian community. He decided to recreate the community’s temples in the hard rock beneath a remote hillside in the Italian Alps. Airaudi – who adopted the name ‘Falco’ – began to dig the [‘temples of Damanhur’](http://www.thetemples.org/) in 1978 with a group of friends. They worked in four-hour shifts around the clock for the following 16 years, carving out nine chambers which they covered with murals, mosaics and stained glass. Kept secret for more than a decade, the temples were seized by local authorities in 1992, and the group was forced to stop building. Yet planning permission was granted retrospectively and, although Falco died in 2013, a community of 600 now lives at [Damanhur](http://www.damanhur.org/). (Credit: Marka/Alamy) 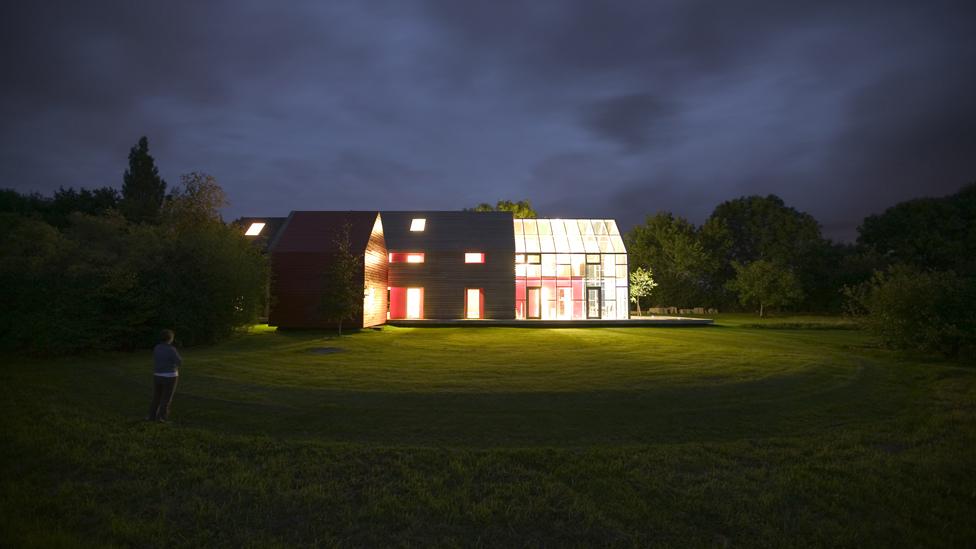 Architects have made a virtue out of the need to hide buildings. London-based dRMMM stuck to stringent planning guidelines for rural development, creating an award-winning design in the process. Their [Sliding House](http://drmm.co.uk/projects/view.php?p=sliding-house) in Suffolk replaced a bungalow and some outbuildings with a building based on a traditional timber-framed barn. Yet the structure is mobile: a 50-ton roof and wall enclosure glides along recessed tracks, revealing the house, annexe and garage. (Credit: Alex de Rijke/Ross Russell/DRMM) 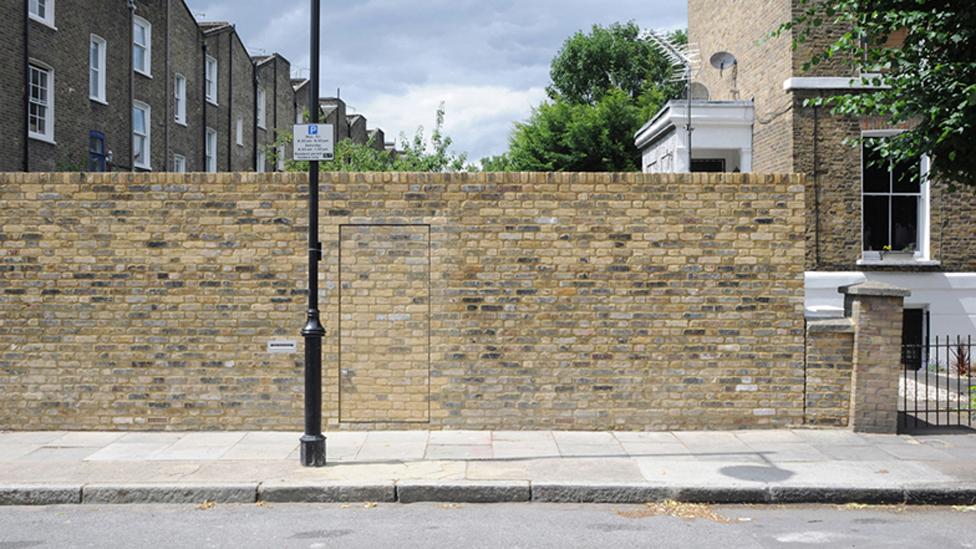 Another brick in the wall

In London, architect Jack Woolley hid an office and house behind a low brick wall. Accessed through a disguised entrance, the [Old Workshop](http://jackwoolley.co.uk/projects/old-workshop) includes a basement level inserted beneath the original carpenter’s workshop, doubling its size without jutting over the top of the wall. Two-thirds of the materials from the original structure were salvaged to make the building, which won the 2012 Architects’ Journal Small Projects Award. (Credit: [David Grandorge](http://grandorge.com/)/Jack Woolley Architects) 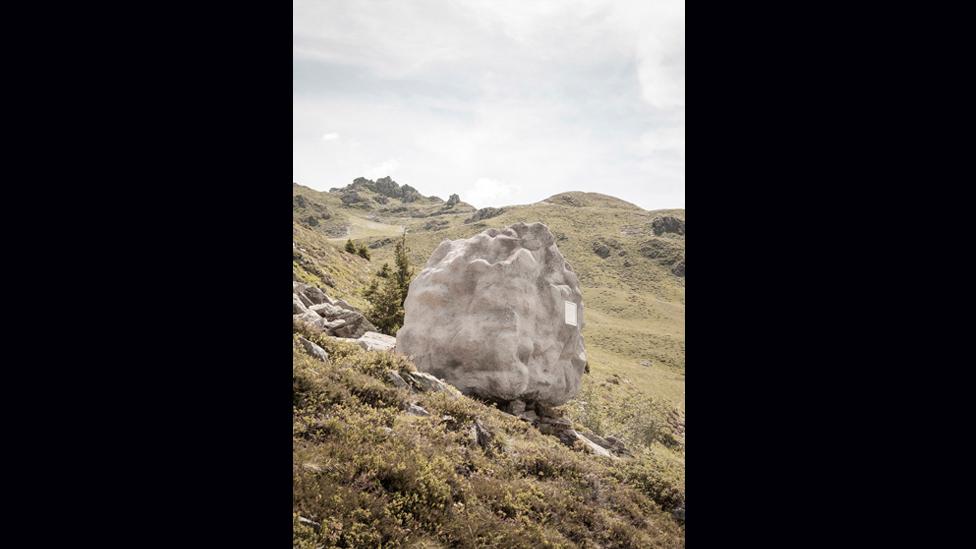 A wooden cabin sits within what looks like a giant boulder in the Alps. The concrete camouflage was designed by Swiss studio [Bureau A](http://www.a-bureau.com/ANTOINE.html) and is named after Antoine, a character who survives seven weeks trapped beneath a rock fall in Charles-Ferdinand Ramuz’s novel Derborence. According to the architects, the cabin refers to “the long-lasting Swiss tradition of hidden bunkers”. (Credit: Bureau A) 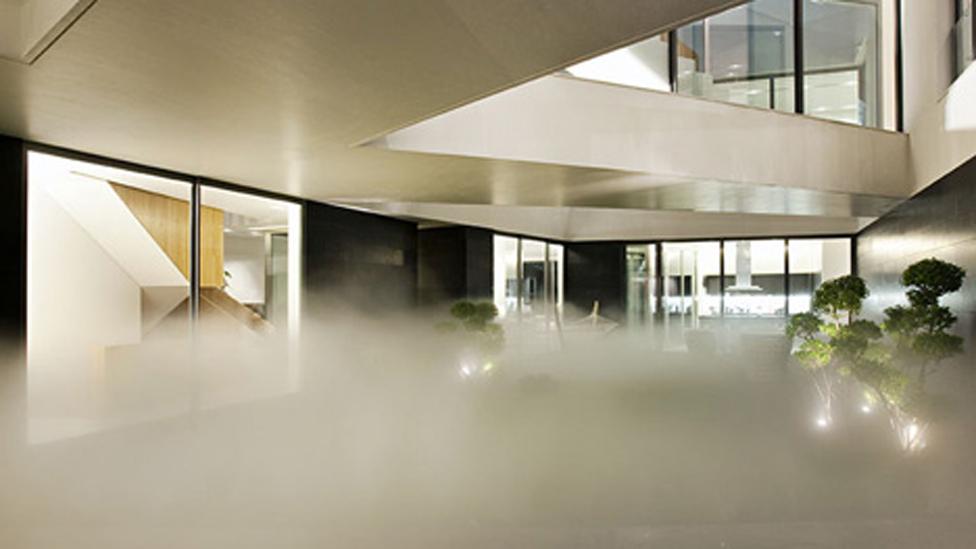 At this home in Kuwait City, mist is released on a timer to cool down inhabitants and shield them from the street. The Secret House was designed by [AGi Architects](http://www.agi-architects.com/), who claim “To adapt to the desert climate, the distances between the built volumes are minimal, resulting in shaded spaces between houses. These spaces that work well as temperature regulators result in facades with little privacy and limited views.” For them, the mist means the house is “a permeable volume that is not transparent, however friendly yet private”. (Credit: [Nelson Garrido](http://www.ngphoto.com.pt/)) 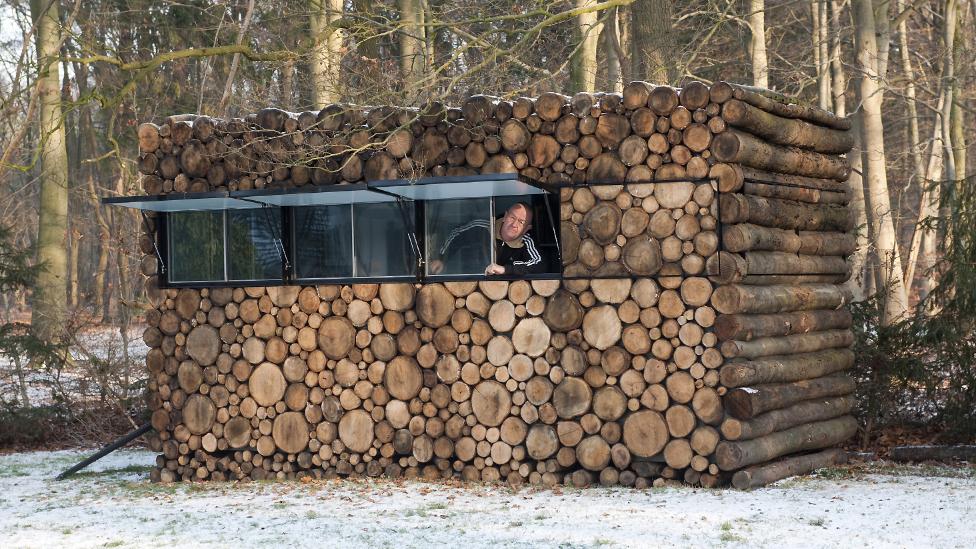 See the wood for the trees

The Woodpile Studio, in Hilversum, the Netherlands, appears to be a pile of logs – until its shutters are opened. Concealing panoramic windows that offer views of the surrounding forest, they are camouflaged with log sections that blend in with the stacked tree trunks that make up the cabin’s frame. The building is a rehearsal space for Dutch musician Hans Liberg, designed by [Piet Hein Eek](http://www.pietheineek.nl/nl). Fitted with wheels to avoid planning restrictions and council tax, it’s a caravan as much as a cabin. (Credit: [Thomas Mayer Archive](http://thomasmayerarchive.de/categories.php?cat_id=2462&l=english))