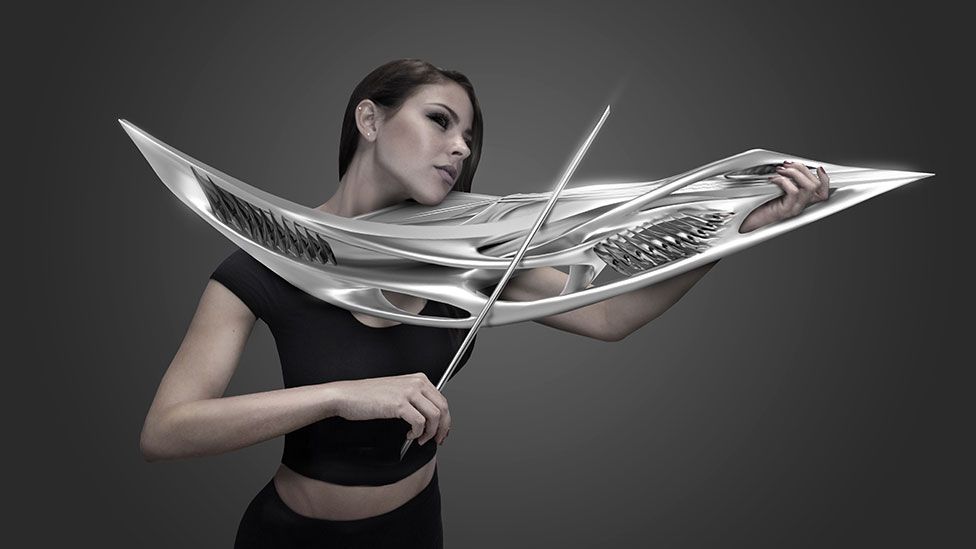 Next month, visitors to the Inside 3D Printing conference at the Javits Center in New York City will have the chance to see – and hear – one of the most radical musical instruments ever created. Or should that be ‘printed’? The two-string Piezoelectric Violin is the brainchild of architects Eric Goldemberg and Veronica Zalcberg of Miami’s MONAD studio, in collaboration with multi-instrumentalist Scott F Hall, who has been dreaming up ways to fabricate exotic instruments since the 1990s.

“Our desire to create unusual instruments emerged when we realised the aesthetic and technical issues we were facing as architects did not differ much from those of musicians and composers,” Goldemberg tells me. He and Zalcberg were interested to explore a “new conception for violin core functionality”, and the instrument – which will be exhibited alongside other curious sonic specimens including their take on the cello, a ‘hornucopia’,and Hall’s ‘monobaribasitar’ – is the result of “intense research on design and computation, leading to direct engagement with musicians, luthiers, composers and interactive artists of different kinds”.

I ask him if the two-string violin is still, at its heart, a violin. Could anyone play it? Yes, he maintains. “With each of our original instruments, a certain functionality and ergonomic structure is preserved: this is why we can call our violin a violin, our cello, a cello, and so forth. There is a certain physical standard of componentry which must be maintained.” And what will they sound like? “Quite similar to what one expects,” Goldemberg says. “More or less like classical bowed strings. On the other hand, they do have a character all their own as a result of the materials and methods in which they are formed. Consider the tonality of classical guitar against that of the Les Paul electric guitar: they do sound the same in a sense, yet also quite different.”

Sound aside, with its “aggressive sci-fi looks”, the Piezoelectric Violin might seem as though it belongs in science fiction rather than a symphony hall, but it is part of a long tradition of unusual instruments that have pushed at the boundaries of engineering, science, music and magic. “Veronica, Scott and I are definitely preserving enough of the history of the violin and other instruments as we venture forth into new designs,” says Goldemberg. “Innovation in instrument design is a balancing act of paying homage to history and tradition while at the same time looking forward boldly into the future.”

Here are some of the Piezoelectric Violin’s most intriguing predecessors…

If you’ve ever licked a finger and circled the edge of a glass, you’ll be familiar with a sonic phenomenon that may have been used as a way of making music since 12th Century China. The effect was observed by Galileo in Renaissance times, and by the 1740s, sets of water-tuned glasses were popularised by the Irishman Richard Pockrich, who dubbed them ‘angelic organs’. In 1745, the composer Christoph Willibald Gluck amazed European audiences with a set of similarly-tuned glasses that he named the ‘verrillon’.

It was one of Pockridge’s ‘angelic organs’ that was played in the 1761 concert which Benjamin Franklin happened to attend, while in London presenting the Pennsylvania Legislature to Parliament. Enchanted, he set about inventing an actual instrument on these principles.  Having figured out that if each glass bowl or goblet was a specific size and thickness it could give the desired pitch without having to be filled with water, he enlisted a professional glassblower to create a set of glasses that were ingeniously compact, nested inside each other and mounted on a spindle which was operated by a foot treadle, like a sewing machine. Thus the glass harmonica, also known as the ‘bowl organ’ or ‘hydrocrystalophone’ was born.

Thirty years later, Mozart heard the sensational blind performer Marianne Kirchgaessner (1769-1808) play one in concert, and was so inspired he wrote an Adagio in C for solo glass harmonica and a quintet combining it with flute, oboe, viola and cello. Beethoven was among the other leading composers who also wrote for the glass harmonica, but, as classical music began to migrate from intimate chambers, the crystalline delicacy of its sound was no match for the new larger concert halls, and it fell out of fashion.

Hector Berlioz was an ardent admirer of these massive, three-stringed, whale-like instruments, referring to them in his famous Treatise on Orchestration. At almost 3.5 metres long, an octobass, which was invented in the mid 19th Century by Jean-Baptiste Vuillaume, is essentially a gigantic double-bass (which, at an average of two metres long, are already the gentle giants of the symphony orchestra). The register is a full octave lower, the strings are much thicker, and they require elaborate foot pedals to play; being far too big for the hands of mere mortals. “To play one is a surreal experience: it feels like Alice in Wonderland,” says double bassist Nico Abondolo.

Conceived in a Soviet chemistry lab as part of an investigation into proximity sensors, this is named after its Russian inventor Léon Theremin, who patented it in the United States in 1928. Originally known as an ‘aetherphone’, the theremin was one of the earliest uses of electronics in music. Probably the only musical instrument which is ‘played’ without physical contact, it incorporates two metal antennas which can sense the relative position of the thereminist’s hands to control both frequency and volume. Higher notes are played by moving the hand closer to the pitch antenna; louder notes are played by moving the hand away from the volume antenna. And a thereminist must “play the rests, as well as the notes”, as star performer Clara Rockmore once observed; unlike touched instruments, where just stopping playing, or damping a resonator, will produce silence.

Classical composers who have been drawn to the theremin include Dmitri Shostakovich and Percy Grainger, but its eerie sound has also proved irresistible for screen composers. Miklós Rózsa used it to memorable effect in Alfred Hitchcock’s Spellbound and Billy Wilder’s The Lost Weekend; it appears on Bernard Herrmann’s score for The Day the Earth Stood Still; and the music of the theremin has been heard by millions thanks to its inclusion in the theme tune to cult British TV series Midsomer Murders.

Theremin music might seem a little niche, but it has had an incalculable impact on the sonic landscape of the 20th Century. The great pioneer of electronic music Robert Moog was still a high-school student when, entranced, he began building his own theremins in the 1950s. Later he credited what he learned from the experience as leading directly to his groundbreaking synthesizer.

Eric Goldemberg is also a fan. “One of the musicians that has most inspired our work at MONAD studio is Jimmy Page and his use of the theremin. It continues to be an open question in terms of the tension between artefact, player and space.”