Loading
State of the Art | Art history
MC Escher: An enigma behind an illusion
Share using EmailShare on TwitterShare on FacebookShare on LinkedinShare on Whatsapp 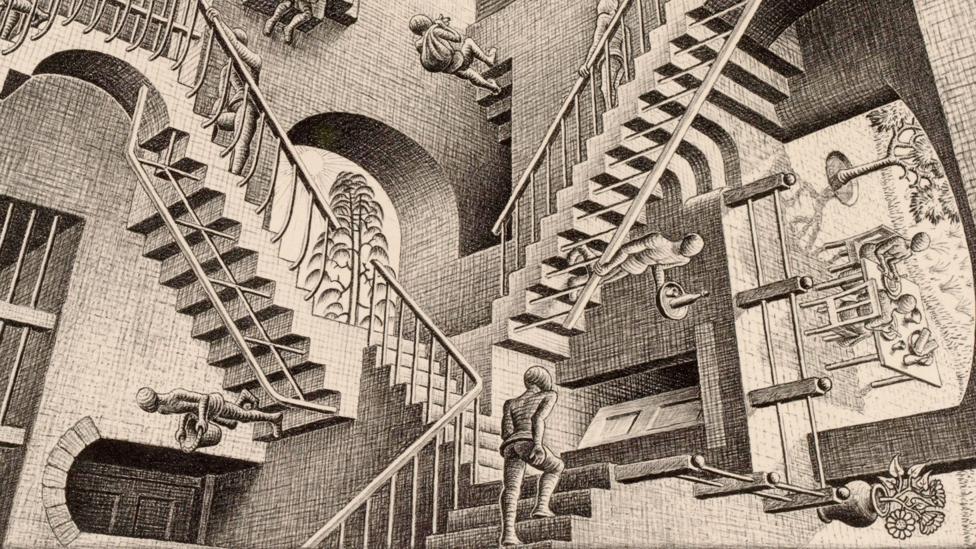 By Alastair Sooke 24th June 2015
It’s an artwork that has been reproduced countless times in popular culture. But behind the familiar picture is a mysterious figure. Alastair Sooke goes in search of MC Escher.
I

It must be one of the most familiar images in modern art: a space-distorting interior that could never exist in reality, dominated by staircases sprouting surreally in all directions, and filled with expressionless, mannequin-like figures walking up and down like members of a religious order calmly going about their daily business.

Since the original lithograph was produced in the summer of 1953, Relativity – which belongs to a series of five prints by the same artist also featuring impossible constructions and multiple vanishing points – has been reproduced countless times on posters, mugs, T-shirts, items of stationery and even duvet covers.

Yet, if we’re honest, how much do most of us really know about its creator, the Dutch printmaker MC Escher (1898-1972)? The truth is that outside his homeland Escher remains something of an enigma. Moreover, despite the popularity of his fastidious optical illusions, Escher continues to suffer from snobbery within the realm of fine art, where his output is often denigrated as little more than technically accomplished graphic design.

In Britain, for instance, it appears that only a single work by Escher belongs to a public collection: the woodcut Day and Night, which presents two flocks of birds, one black and one white, flying above a flat Dutch landscape in between a pair of rivers. Day and Night was Escher’s most popular print: during the course of his lifetime, he made more than 650 copies of it, painstakingly rendering each impression with the help of a small egg spoon made of bone. 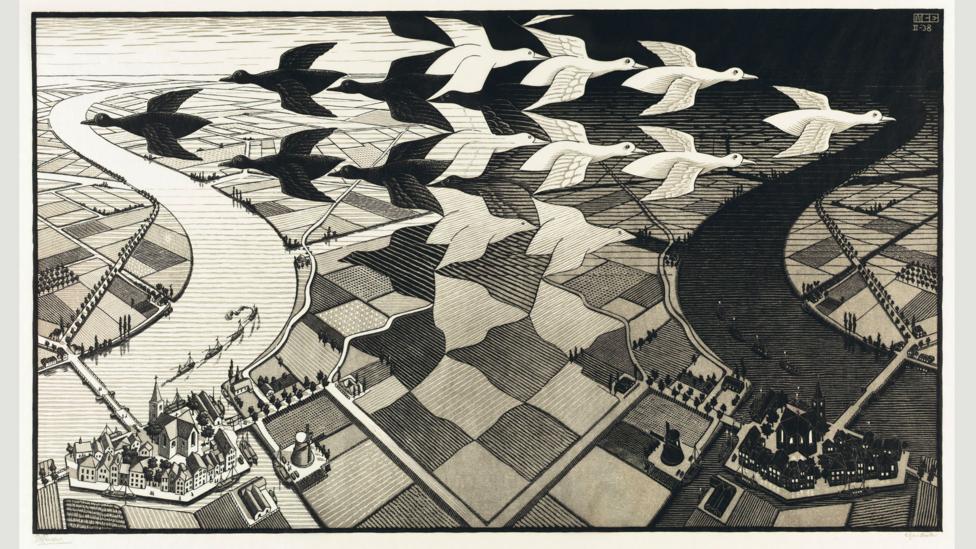 Day and Night was Escher’s most popular print: during the course of his lifetime (Credit: 2015 The M.C. Escher Company – Baarn, The Netherlands)

Yet, as Patrick Elliott of the Scottish National Gallery of Modern Art points out, even the print of Day and Night in the collection of the University of Glasgow’s Hunterian Museum and Art Gallery “was actually acquired by the Geography Department and was transferred to the Museum at a later date”.

So who was Escher – and does he deserve the indifferent reputation as a fine artist that fate has dealt him? These are some of the questions posed by The Amazing World of MC Escher, a forthcoming exhibition at the Scottish National Gallery of Modern Art in Edinburgh, which also happens to be the artist’s first major UK retrospective.

Born in the small city of Leeuwarden in the north of the Netherlands, Maurits Cornelis Escher, who was always known in his family as “Mauk”, grew up in a prosperous household as the fifth son of a civil engineer who was a senior official at the Department of Public Works.

At secondary school in the city of Arnhem, where his family had moved in 1903, he had an unhappy time – and his miserable memories of this period of his life had a decisive influence upon many of his later prints, including Relativity.

Indeed, decades after “the hell that was Arnhem”, as Escher later described his schooldays, he made a number of works featuring versions of the institution’s dramatic staircase, which he had ascended so frequently as a boy. The resemblance between the school’s staircase in reality and the structures in Escher’s prints is remarkable.

In 1919, Escher enrolled at the School of Architecture and Decorative Arts in Haarlem. His father hoped that he would become an architect, but, influenced by his graphic arts teacher, who had spotted his talent as a printmaker, Escher was determined to become an artist. As an adult, he pursued this career – combining travel, when he sketched and came up with ideas for future works (his two visits to the Moorish palace of the Alhambra in Granada were especially important, since they taught him how to work with tessellating patterns), with long stints at home, where he led a remarkably orderly life.

“He had a severe daily routine mixing working and walking and meeting visitors,” says Micky Piller, curator of Escher in Het Paleis, the museum devoted to the artist’s works in The Hague, where selections are shown from the collection of the Gemeentemuseum, which has also loaned works to the exhibition in Edinburgh. “He liked to observe nature, the sky, and birds. He loved classical music, especially Bach.”

Despite his self-discipline, however, Escher only became able to support himself solely from art during his late fifties. By then he had discovered his principal theme of perspective-mangling worlds, familiar from works such as Belvedere (1958), Ascending and Descending (1960), and Waterfall (1961), as well as Relativity. He was also known for executing his prints to a very high level. 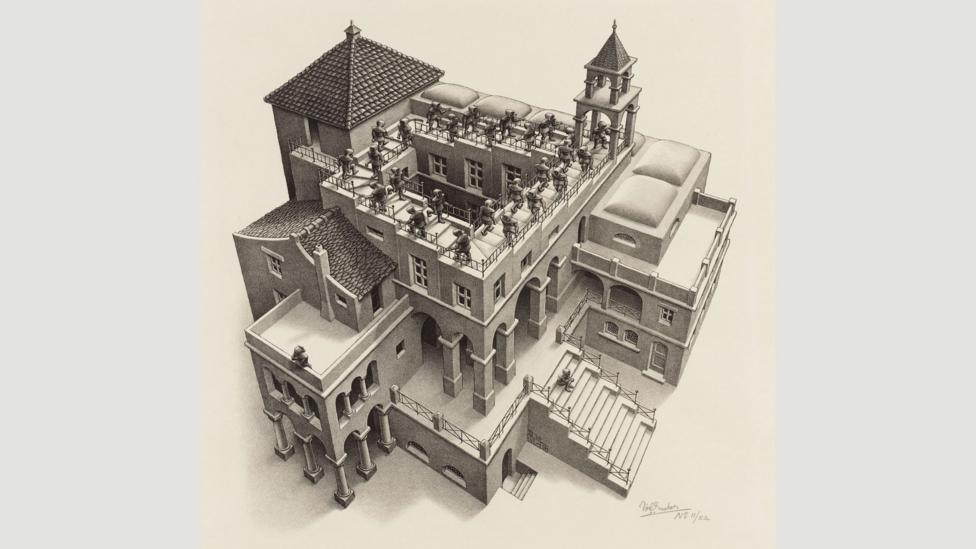 Escher was known for executing his prints to a very high level, such as Scaffold Ascending and Descending (1960). (Credit: 2015 The M.C. Escher Company – Baarn, The Netherlands)

Occasionally, one gets the impression that this meticulous, sober man could be a little stuffy. During the ’60s, Escher’s work found mainstream popularity, as hippies delighted in its supposedly “psychedelic” qualities. (It used to be believed, incorrectly, that the plant at the centre of Balcony was cannabis.) Yet when Mick Jagger wrote to “Maurits” asking for permission to reproduce one of his pictures on the cover of the Rolling Stones’ album Through the Past Darkly, Escher refused, informing the rock star’s assistant: “Please tell Mr Jagger I am not Maurits to him.” In 1965, Escher also turned down Stanley Kubrick’s request for help on a “fourth-dimensional film” (perhaps 2001: A Space Odyssey).

Still, this doesn’t mean that Escher was humourless. “I like to think he was a rather quiet person, but very tongue in cheek,” Piller says. “His relatives found him witty. He was open-minded and interested in the world and very dedicated to his art.” Moreover, turning down requests from famous people in other fields didn’t stop his prints having a tremendous impact upon popular culture. Some of his pictures did appear on album covers, including The Scaffold’s L the P and Mott the Hoople’s eponymous debut. They also became a reference point for cartoonists. 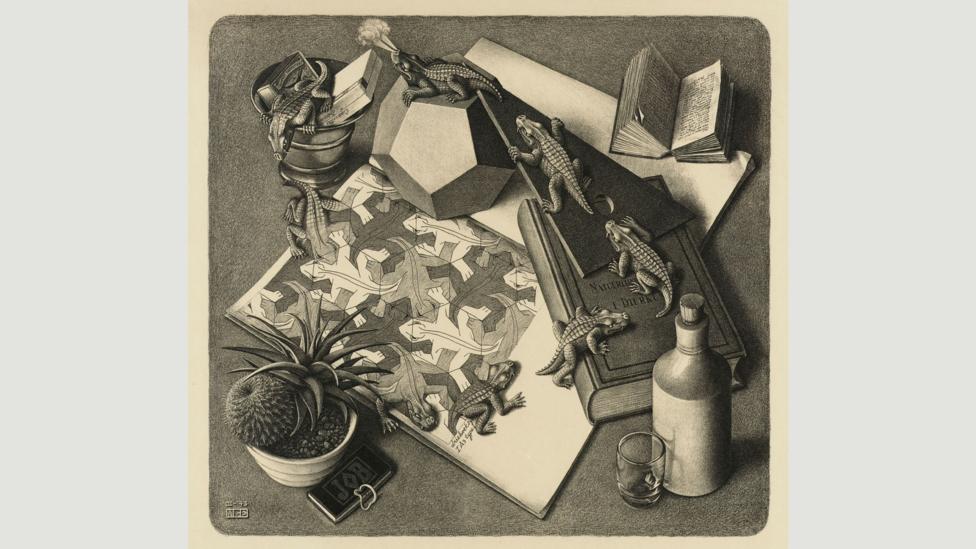 Some of Escher's work appeared on album covers, including Mott the Hoople's eponymous debut (Credit: 2015 The M.C. Escher Company – Baarn, The Netherlands)

More recently, Escher’s mind-bending visions have provided inspiration for the creators of The Simpsons, as well as film-makers including Jim Henson, whose 1986 film Labyrinth starring David Bowie includes a homage to Relativity, and Christopher Nolan, who created a dizzying, Escher-like dream sequence for his 2010 blockbuster Inception, in which the streets of Paris are seen to fold, buckle, and warp. 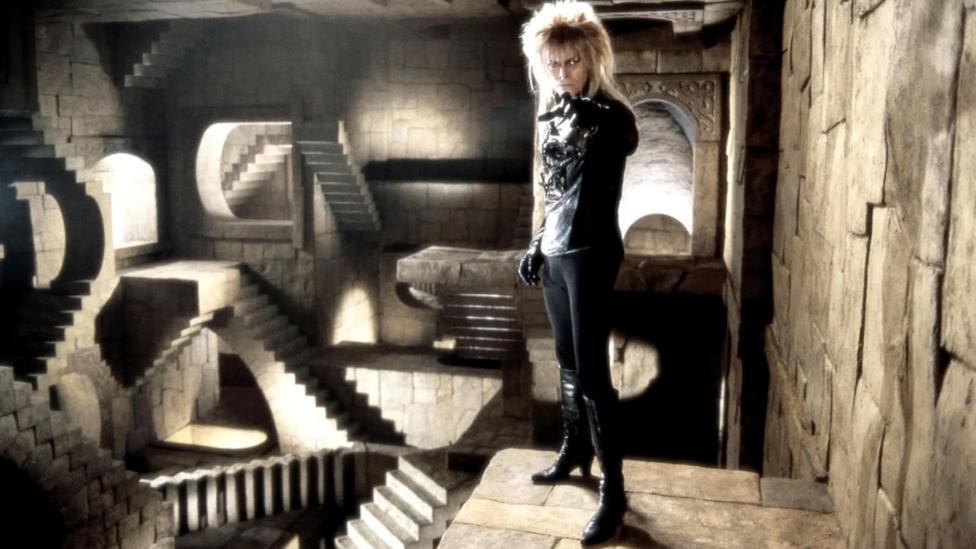 So how should we think of Escher – as a purveyor of visual conundrums and curiosities, or a “proper” printmaker working within a venerable tradition? He is sometimes called “a one-man art movement”, and this seems like as good a description as any, because he didn’t associate himself with other tendencies in modern art, including the one – Surrealism – to which he was arguably closest in spirit. He also had few artistic successors: “Although he created something absolutely new,” says Piller, “Escher has not directly influenced any artists.”

At the same time, Escher was capable of concocting potent images with near-universal appeal – something, surely, to which most fine artists would aspire. “At a time when abstract art was ruling the galleries,” Piller says, “Escher fooled all of us by exploring such abstract ideas as eternity, infinity, and the impossible in apparently realistic prints that were amazingly well made. As the general public lost contact with the art world, Escher’s prints seemed simple and easy to understand.”