Loading
Design
Posters: Is the writing on the wall?
Share using EmailShare on TwitterShare on FacebookShare on Linkedin 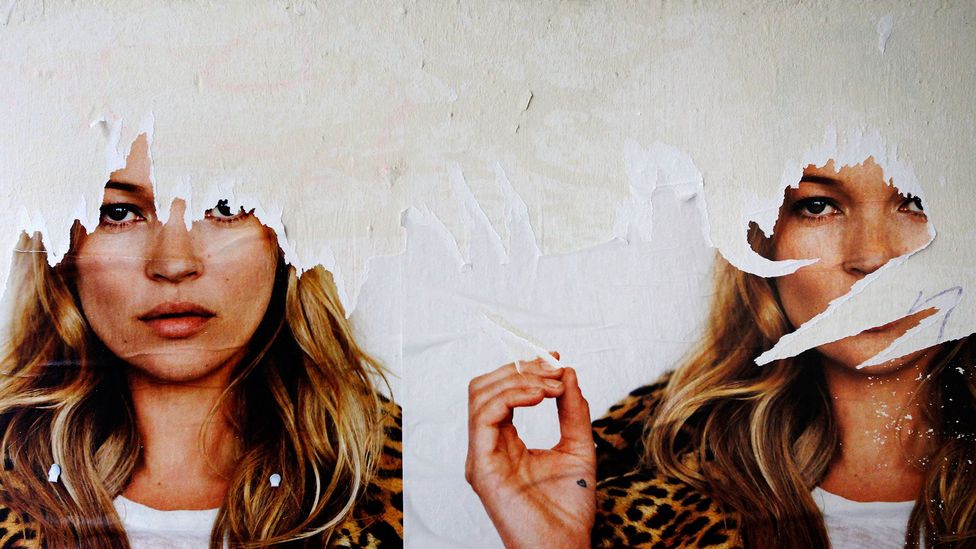 By Rob Alderson 7th July 2015
Bold, printed graphic designs have fought for our attention in the streets for years – but do posters have any future in the digital era? Rob Alderson investigates.
T

Tony Brook is very passionate about posters – he has designed scores of them during his 30-year career, published books about posters and has a collection of around 200 in his home. But even he is unsure whether the printed poster has a future.

"We used to do loads of posters," he says of his London-based studio Spin, "but now there aren't really that many opportunities. It wouldn't be a whole percentage of our business, it would be 0.0-something. The commissions just aren't there."

Although in some countries (particularly in western Europe) you still see a lot of posters, the internet has made it very quick, easy and cheap to spread information without going to the trouble of designing, printing and pasting something up. Brook believes posters will survive as collectable graphic art objects – what he calls ‘poodle posters’ – "because they're not meant to go outside" – but thinks they could lose their traditional function within a decade. "I could see the communicative aspect being dead in ten years' time," he predicts.

Although the idea of posting up messages can be traced back many centuries, posters as we understand them emerged in the 19th Century, and their history has been tied to developments in printing methods like lithography, screen printing and photocopying. From spreading political messages to publicising concerts, the poster was a remarkably enduring medium and played a key role in communication, particularly in cities.

It is easy to see how the internet has changed the game. If someone wants to use text and imagery together to make a point or advertise an event, they can use simple design software which comes as standard with most computers. This can be shared with the wider world very simply via Facebook, Twitter or Instagram. 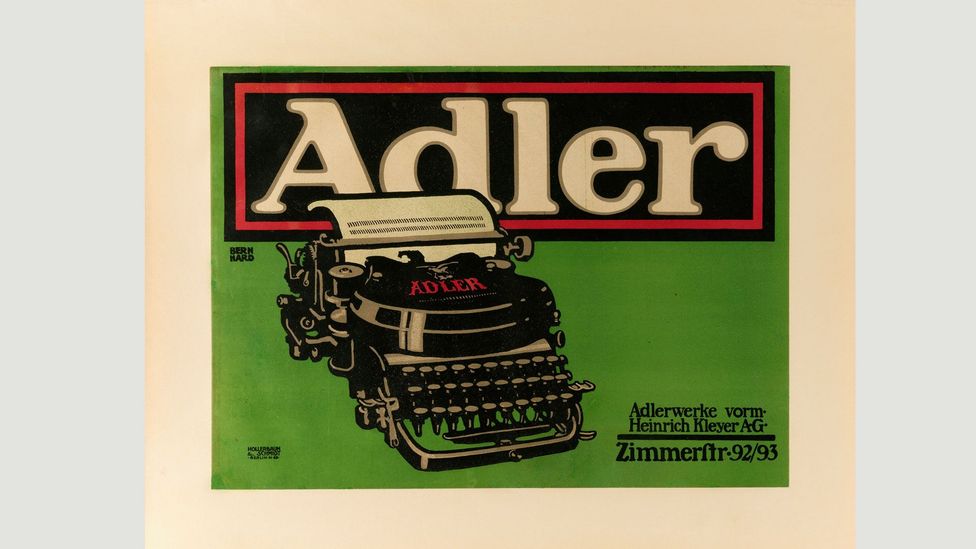 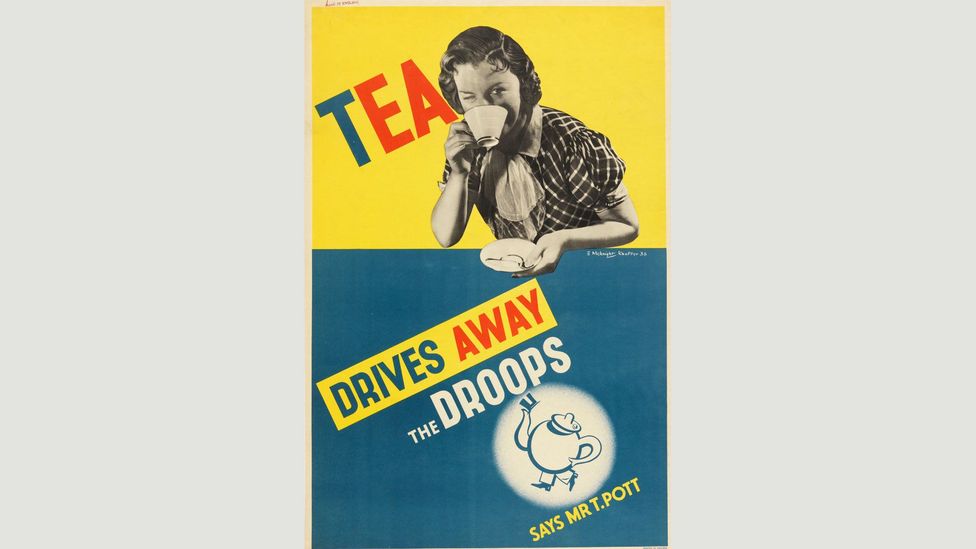 This 1936 British poster combines block colours with a black-and-white photograph of the singer Gracie Fields to advertise a brand of tea (Credit: Cooper Hewitt Museum)

This 1936 British poster combines block colours with a black-and-white photograph of the singer Gracie Fields to advertise a brand of tea (Credit: Cooper Hewitt Museum) 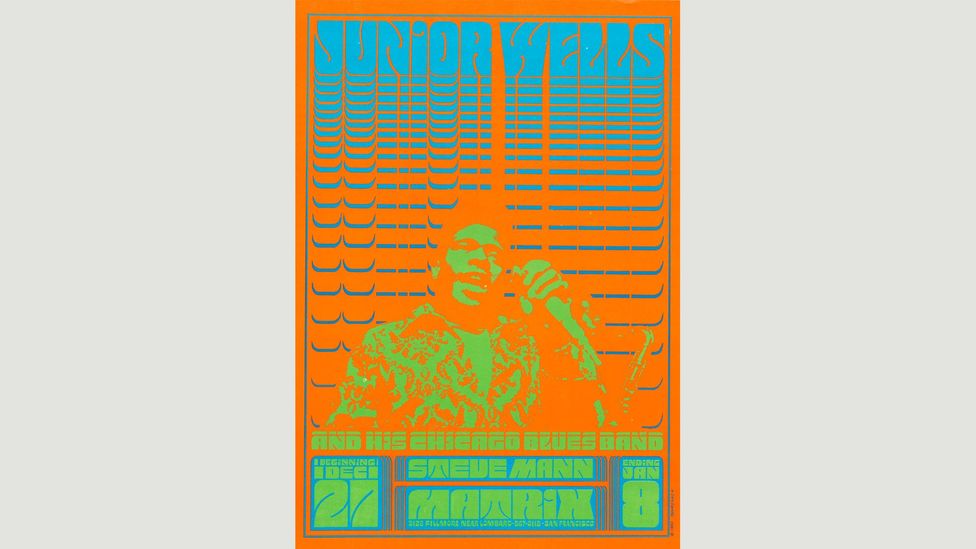 Psychedelic posters of the 1960s aimed to overwhelm the eye by juxtaposing clashing colours, as in this 1966 example by Victor Moscoso (Credit: Cooper Hewitt Museum)

Psychedelic posters of the 1960s aimed to overwhelm the eye by juxtaposing clashing colours, as in this 1966 example by Victor Moscoso (Credit: Cooper Hewitt Museum) 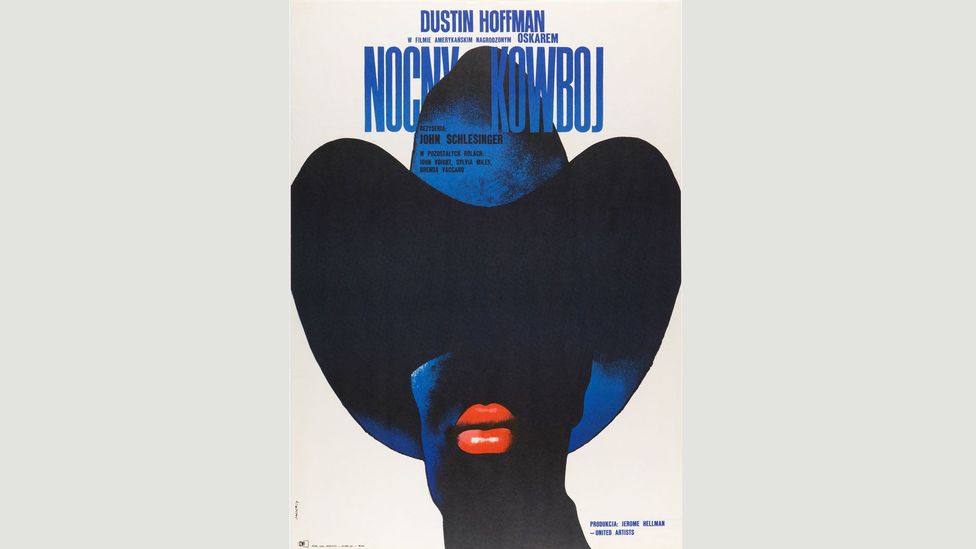 Poland has a lively poster design scene. This 1973 advertisement for Midnight Cowboy could not be more different from the film’s US marketing (Credit: Cooper Hewitt Museum)

Poland has a lively poster design scene. This 1973 advertisement for Midnight Cowboy could not be more different from the film’s US marketing (Credit: Cooper Hewitt Museum) 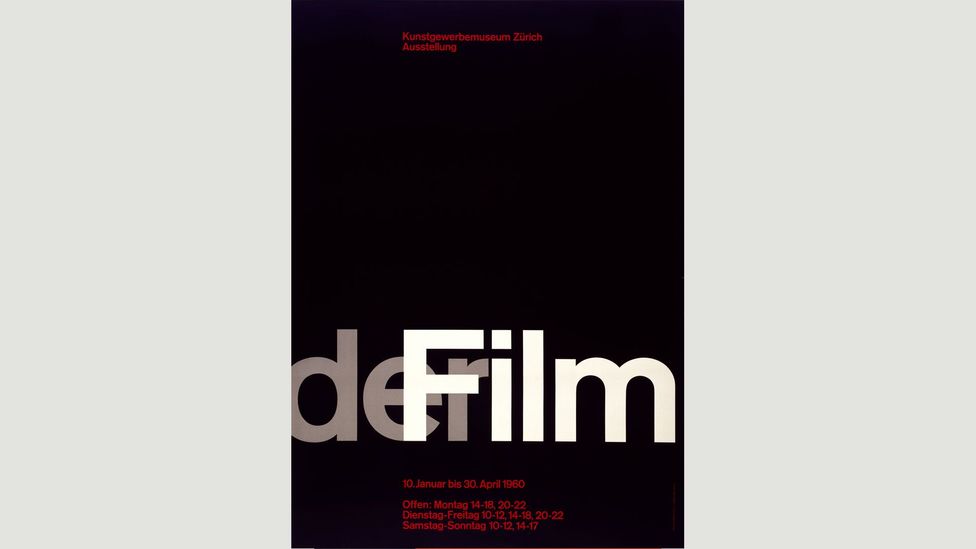 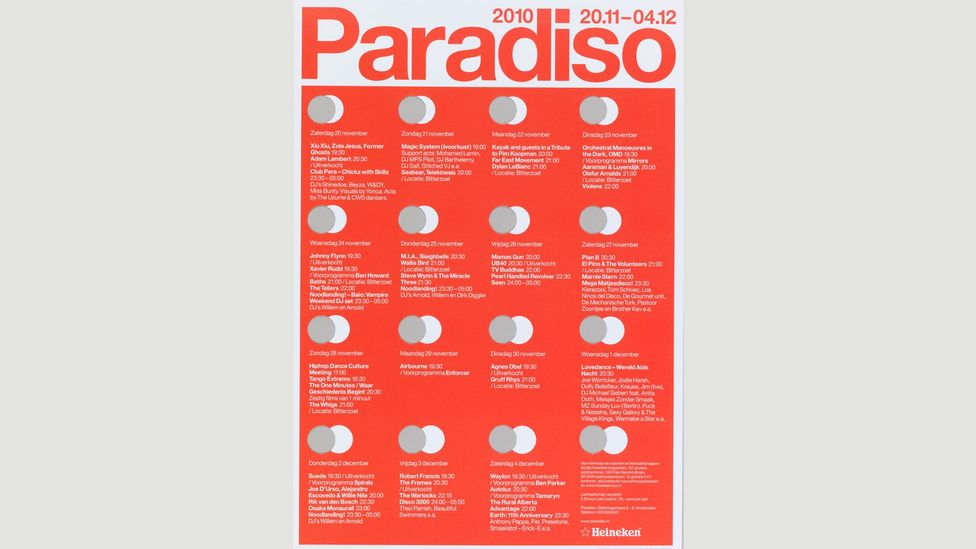 Nightclubs were once prodigious commissioners of posters. This example from Amsterdam shows the influence of Müller-Brockman’s ideas 60 years later (Credit: Cooper Hewitt Museum)

Nightclubs were once prodigious commissioners of posters. This example from Amsterdam shows the influence of Müller-Brockman’s ideas 60 years later (Credit: Cooper Hewitt Museum)

But the future of the poster has been called into question before, and previous reports of its demise seem to have been premature. In their book History of the Poster, published in 1971, Josef and Shizuko Müller-Brockmann wrote: "It cannot be seen whether, or for how long, the poster will have a future. Doubts regarding its future chances are justified."

Long before the internet, it was thought that both newspapers and then television would kill off printed posters. The political poster, the film poster and the gig poster have all been declared dead over recent decades. More digital screens have appeared in bigger cities and will only become more common. Yet the poster seems to be adept at finding a new place in the visual landscape and redefining its role.

Caitlin Condell is the Assistant Curator of the drawings, prints and graphic design department at the Cooper Hewitt, Smithsonian Design Museum in New York. She helped put together its current show, How Posters Work, which uses 125 examples from the museum's 4,000-strong poster archive to demonstrate the ways in which designers maximise the impact of their creations.

She doesn't believe posters are on the verge of becoming extinct. "There's a tremendous anxiety about whether the poster is dead, but it's just not," she says. "The poster landscape is definitely changing and I do think some graphic designers have left the poster behind, but for some it's still the most effective way to communicate something."

Condell cites activist movements like Occupy – which still uses posters prominently alongside its social media channels – as proof that posters still have a role in communicating ideas and information. 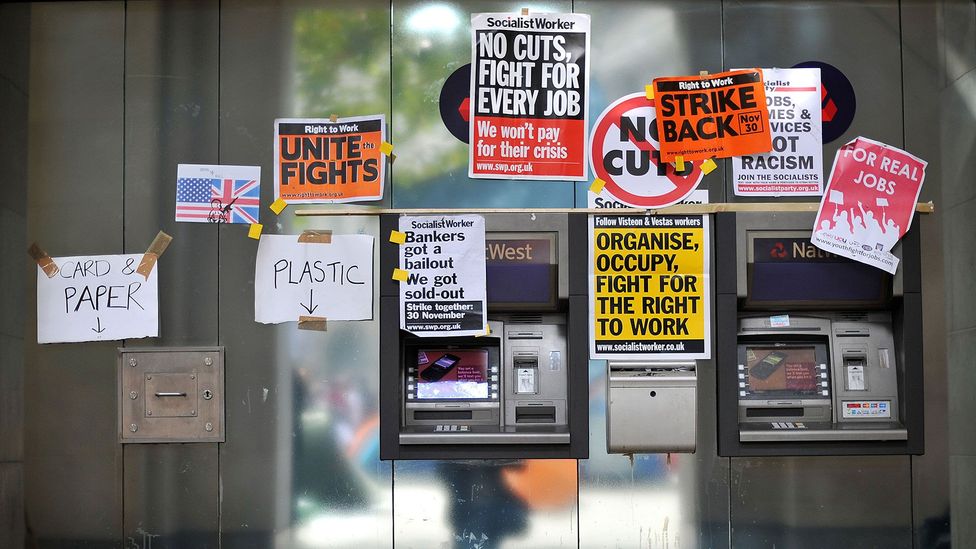 The Occupy Movement that gathered pace around the world in 2011-12 used posters to communicate with a mass audience (Credit: AFP/Getty Images)

But she is also interested in the "personal visual experience" people have with posters and she thinks this helps explain their enduring popularity. "The message of a poster should be able to call at you from across a room and then when you get closer you continue to take in information," she says. "You can initially respond to something for a completely different reason to why you ultimately become engaged with it."

Watching visitors at the Cooper Hewitt exhibition, she's struck by how people respond to posters which have been removed from their original context. She's seen people get very excited by psychedelic posters for bands they've never heard of, or get drawn in by posters that are written entirely in a language they don't understand. "A really good poster has a life beyond its initial use and initial purpose," she says.

She thinks it's this pull on the viewer's imagination that will secure the poster's future, even if its traditional role spreading information or promoting a product has gone elsewhere.

"I would imagine it will become more about that special, personal interaction with something rather than the cheap, quick, dirty need for communication," she says.

But even in light of these changes – and Condell accepts that fewer and fewer posters will be printed over the next 20 years – the curatorial team had no difficulty finding young graphic designers working today producing relevant and engaging posters.

One of those was Swiss designer Felix Pfäffli, who works under the name Feixen. The Cooper Hewitt acquired several of his posters for this show, one of which features on the front of the exhibition catalogue. He acknowledges that printed posters have become "luxury objects" but he is particularly excited about how animated posters can exist in the digital realm.

"A good poster design is able to get your attention in milliseconds," he says. "We will always need this kind of communication. Maybe future posters will not be printed and distributed throughout the city but they will exist on screens or used to promote stuff online."

He also thinks you can find clues about how the poster might exist in the future by looking at the book, another printed object whose death was widely and confidently predicted as the digital revolution took hold. "A few years ago everybody thought books would disappear but the opposite happened. Today the books which are produced are on an incredibly sophisticated level. I think the same will happen with the poster – it will change but the medium will never die."

Pfäffli, like Brook and Condell, agrees that printed posters will become rarer, but he thinks the design principles that have long defined the poster – clarity, visual impact and immediacy – will always have a place in visual communication.

"I don’t see the poster as a medium reduced to colour on paper," he says. "I think the idea of a poster is just to have a limited, defined space – it is absolutely unimportant how big it is, or what material it's printed on. The whole process how you think about and make a poster will change, but that doesn’t change the fact that we will always need media that communicate in a super concentrated way."