Loading
Photography
Altered images: Is this real or faked?
Share using EmailShare on TwitterShare on FacebookShare on Linkedin 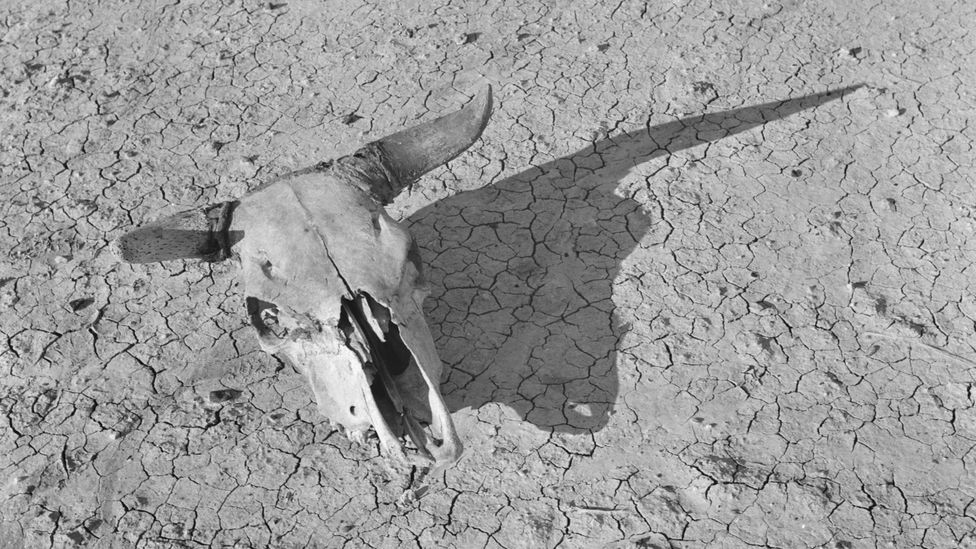 By Fiona Macdonald 8th July 2015
Former award-winning photojournalist Michael Kamber is so unhappy about the rise in altered images that he has set up an exhibition helping people to spot digital trickery. He talks to Fiona Macdonald.
H

How do we know if what we’re looking at is real? With the advent of smartphone apps, CGI and Instagram, we’re increasingly seeing the world through a filter. When that filter is applied to soft-focus selfies and marauding dinosaurs, it’s arguably not such a problem. But what about an image of a news event: an act of war or a feat of bravery? How can we know that hasn’t been tampered with?

“In years past, we assumed photos weren’t altered – now we wonder,” says American former photojournalist Michael Kamber. “Now you look at a photo and think ‘has that been Photoshopped so much that it no longer represents the reality that I’m being presented with – is it an altered reality?’ We shouldn’t have to put a disclaimer on our photos to tell people that they’re real.”

Kamber is so troubled by the rise in manipulation of press images that he has co-curated a new exhibition in New York. Altered Images: 150 Years of Posed and Manipulated Documentary Photography reveals more than 40 photos that have been faked, posed or manipulated, from 19th-Century propaganda to 21st-Century digital trickery.

When the technicians were standing there and showing us what they found, we were shocked. Truly shocked

“I think photojournalism is going through a crisis of credibility because there’s so much altering going on, it’s almost becoming accepted now,” he tells BBC Culture. “I was a photojournalist for 25 years and it’s incredibly damaging to what’s left of our profession.”

Kamber has covered a dozen conflicts in places such as Iraq, Afghanistan and Somalia, and witnessed colleagues and friends putting their lives on the line to capture events. “If you look at Martin Adler or Tim Hetherington, these are folks who risked their lives and gave their lives to bring home to the public the reality of what was happening out there. There are some photographers today defacing that tradition and I find it disrespectful.”

He believes there are a number of reasons why image tampering is on the rise, among them the revolution in technology. “When I was growing up, to manipulate a negative was extraordinarily difficult… Kids today are growing up thoroughly immersed in this digital age. They grow up changing things, moving objects around – in photos, video games and films. So their brains are oriented to possibilities that I didn’t even know about.”

Of course, image altering is nothing new. The exhibition features photos from more than 150 years ago, including what is seen as the forerunner of photojournalism, Roger Fenton’s Valley of the Shadow of Death. Taken during the Crimean War in 1855, it shows cannonballs scattered across a battlefield – but another photo taken by Fenton earlier on the same day shows the cannonballs collected in a ditch, meaning they were moved to stage the image.

When describing the picture in her 2003 book Regarding the Pain of Others, Susan Sontag wrote: “Not surprisingly many of the canonical images of early war photography turn out to have been staged, or to have had their subjects tampered with.”

Another image is the shot of Red Army soldiers raising a flag above the German parliament in May 1945. Taken by Soviet Army photographer Yevgeny Khaldei, it appears to capture a spontaneous moment that came to symbolise Soviet triumph over Nazi Germany. Yet it was carefully planned: Khaldei had a tablecloth sewn onto a large flag and flew from Moscow to Berlin with the aim of recreating the iconic image of US marines raising a flag on Iwo Jima. He posed the soldiers on the roof of the Reichstag, later scratching out the wristwatches they wore (which were proof of Soviet looting) and adding columns of dark smoke. 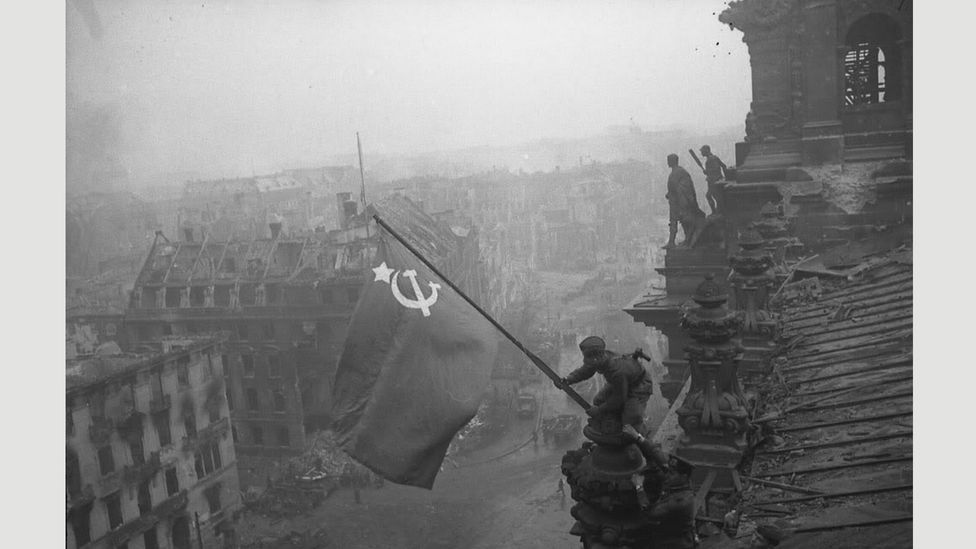 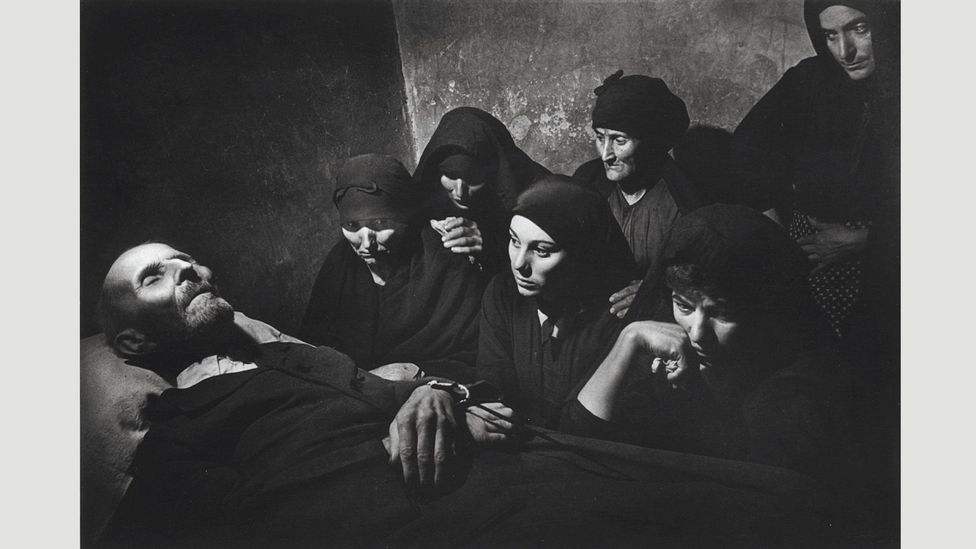 This image by Eugene Smith first appeared in a 1951 LIFE magazine photo essay, next to the caption: “His wife, daughter, granddaughter and friends have their last earthly visit with a villager”. Yet in the original photo, two of the women were looking at the camera: [according to Altered Images](http://www.alteredimagesbdc.org/#/eugene-smith-spanish-wake/), “Smith printed their eyes much darker and applied bleach with a fine-tipped brush to create new whites areas, redirecting their gazes downward and to the side and altering the mood of the photo.” The photographer told an American Society of Magazine Photographers meeting in 1956: “I ask and arrange if I feel it is legitimate. The honesty lies in my – the photographer’s – ability to understand... I will retouch.” (Credit: W Eugene Smith) 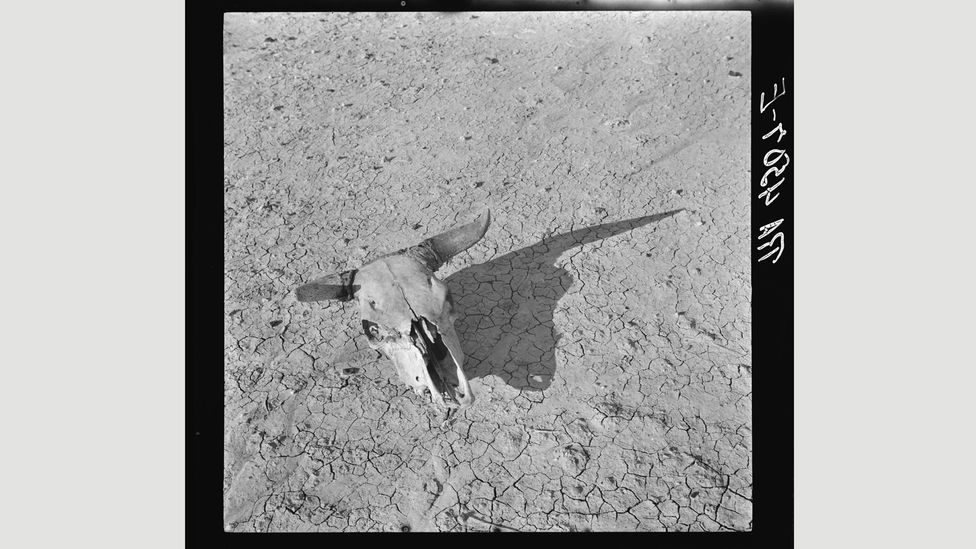 This image – by Arthur Rothstein, an employee of the federal government’s Works Progess Administration – came to symbolise the drought that had forced thousands of farmers off their land. Yet it emerged that Rothstein had photographed the same steer skull in several locations, drawing accusations of government propaganda. [According to Altered Images](http://www.alteredimagesbdc.org/#/rothstien/), Rothstein stated in a 1964 interview that he was using the skull for “exercises in photography,” experimenting with “the texture of the skull, the texture of the earth, the cracks in the soil, the lighting” and “how the lighting changed from the east to the west as the sun went down.” Rothstein claimed that he “had not taken the picture in the first place as an example of New Deal propaganda” and that he “had not taken the picture with the idea of it being used as a symbol of the drought.” (Credit: Arthur Rothstein)

One of the best-known images of warfare, Robert Capa’s Falling Soldier, has also been contested. Although no one knows whether it was faked, Kamber has his doubts. “I believe the Falling Soldier photo is staged – I photographed combat for many years, and never photographed anyone at the moment of death – Capa has two pictures on the same roll of film at the moment of death… I think the chances of that being real are astronomical.”

Yet he argues that photographers like Capa were operating in different conditions, before a code of photographic ethics emerged. “In Capa’s defence, he was working at a time when there were no set standards in photojournalism… He wasn’t breaking any standards because there were no standards. His professionalism as he moved forward did help to create the standards of modern photojournalism, and we have to credit him with that.”

Kamber decided to mount this exhibition after controversy surrounding this year’s World Press Photo competition, in which a fifth of the finalists were disqualified for manipulating their images. One winner was stripped of his prize after it emerged that he had misrepresented the location of one of his images, prompting World Press to organise an ‘ethics symposium’ in New York later in 2015 (just 8 per cent were disqualified in the final rounds of the previous year’s contest).

The chairman of the British Press Photographers’ Association, Jeff Moore, said that World Press Photo should be a celebration of news, sports and editorial photography, “and not clever post-production”. Kamber believes that restoring credibility to photojournalism is “in the hands of editors, and of contests”.

In the past two years, World Press Photo organisers have requested that finalists submit unprocessed files. According to managing director Lars Boering: “We… used to be about ‘trust’ – but eventually we had to become police. Once we started checking the files we found a lot of things. When the technicians were standing there and showing us what they found, we were shocked. Truly shocked.”

Altered Images is at the Bronx Documentary Center in New York until 2 August 2015.