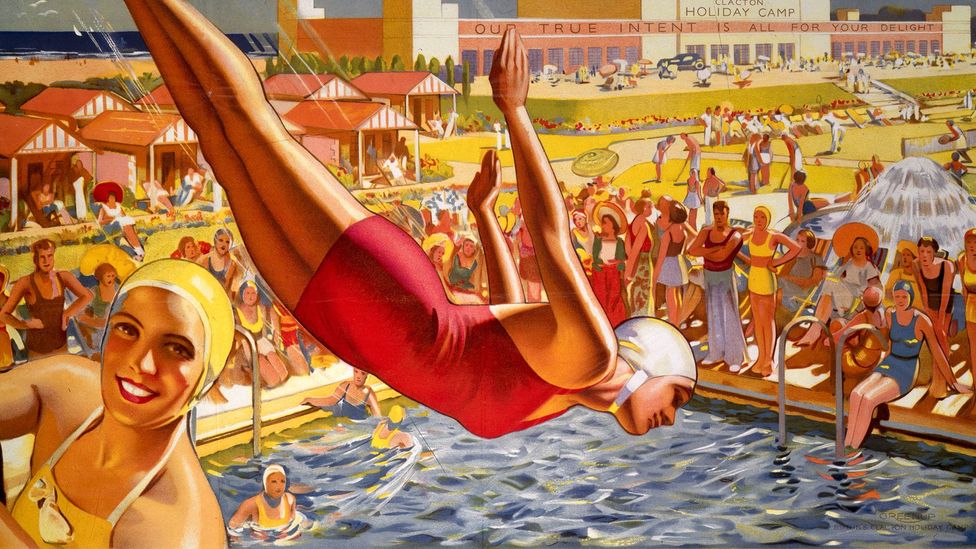 By Amanda Ruggeri 17th August 2015
What makes old-school tourism posters so appealing? And how did they get so strikingly stylish? We take a whistle-stop tour of 60 years of British railway posters to find out. 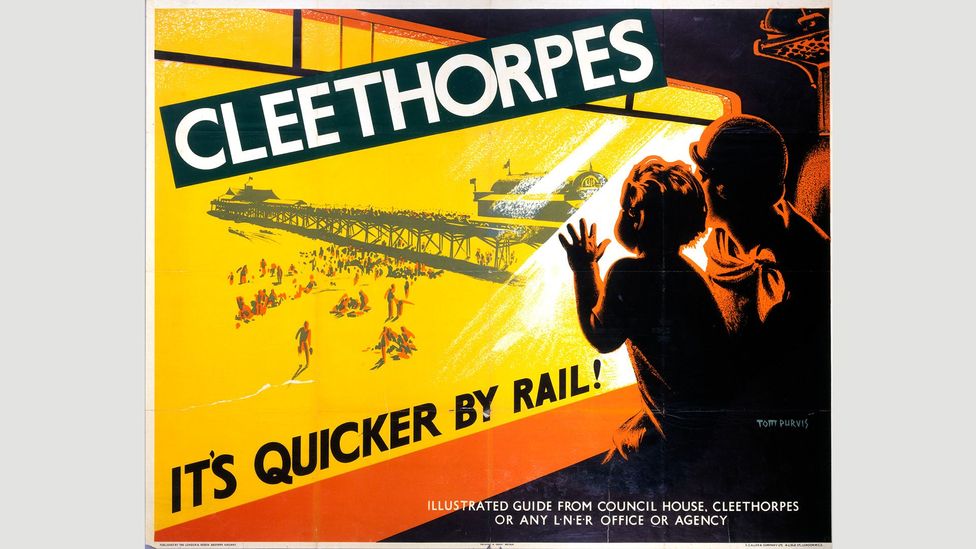 Blame hipsters, nostalgia or simply a rediscovered love for all things retro: old-style tourism posters are back – and not just on college students’ walls. Christie’s sold its highest-grossing travel poster in history last year when [Henri de Toulouse-Lautrec’s Moulin Rouge lithograph](http://www.christies.com/lotfinder/posters-signage-advertising/henri-de-toulouse-lautrec-moulin-rouge-5791457-details.aspx) went for £314,500, double the original estimate. And [artists are being commissioned to create works that look old](http://www.dailymail.co.uk/travel/travel_news/article-2887628/Collectors-spending-thousands-pounds-retro-posters-capture-halcyon-days-Europe-s-ski-resorts.html): not least of all by [NASA](http://time.com/3659519/nasa-vintage-exoplanet-travel-posters/) and [SpaceX](http://www.popularmechanics.com/space/moon-mars/a15585/spacex-vintage-mars-travel-posters/), which reimagined interstellar destinations through a retro lens earlier this year. “The whole point of an advertising poster is to immediately connect with the viewer, draw the eye in and stop you in your tracks as you pass by – and they still do that today,” says Sophie Churcher, a specialist in the 19th and 20th Century posters department at Christie’s, the only international art auction house that sells posters. “They still have that immediate appeal.” While we can usually recognise a ‘retro’ poster like this 1930s work by Tom Purvis, what stylistic cues are we picking up on? Posters by British railway companies were the most ubiquitous UK tourism posters for decades – we chart their progress to find out. (Credit: NRM/Pictorial Collection/Science & Society Picture Library) 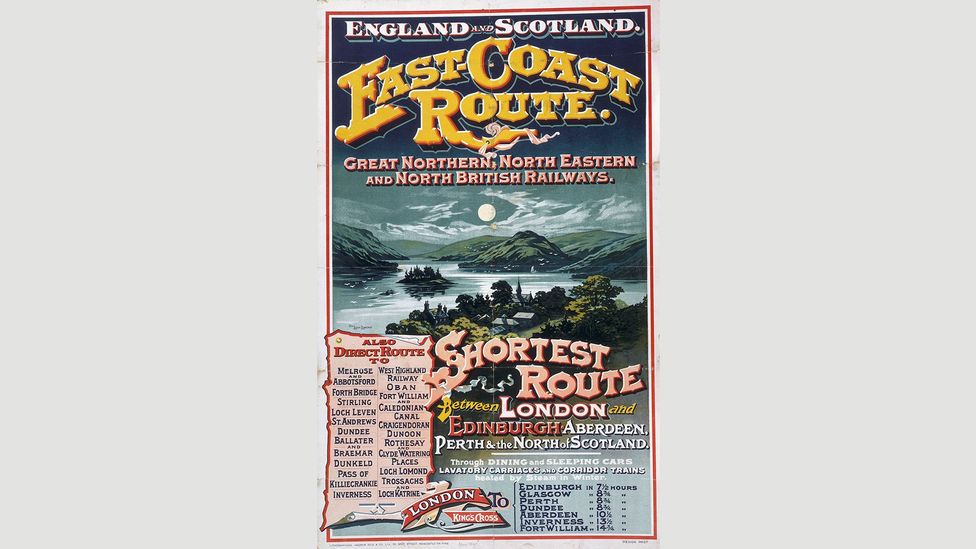 Crammed as a carriage

To understand how far British tourism posters have come, says Tim Procter, curator of the archive and library collections at York’s [National Railway Museum](http://www.nrm.org.uk/), you first have to see where they started. Before the 1920s, many had a similar style to this 1895 advertisement. “From the late 19th Century up until the 1920s, a lot of railway posters were based around landscape painting – the countryside and hills, moorland and castles,” Procter says. “And the design was really quite crude. It was very jumbled, with different typefaces. The poster would try to cram in train times and prices as well as the company name.” Meanwhile, writers for the professional railway press debated what a poster should do: provide detailed information, or use graphics to convince a viewer to go somewhere? Many artists, like the one here, whose name has been lost, followed the former camp. (Credit: NRM/Pictorial Collection/Science & Society Picture Library) 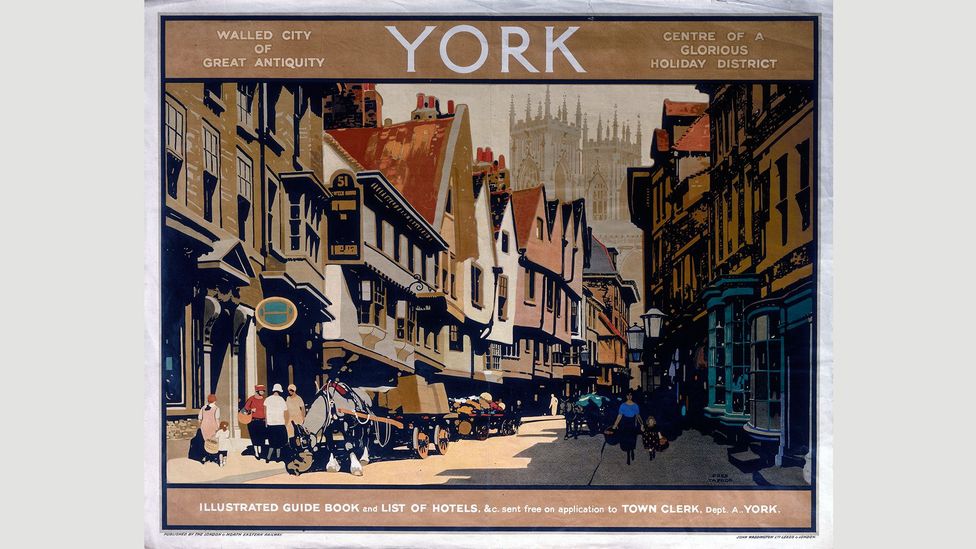 “The 1920s is when it started getting interesting for British travel posters,” says Churcher. Previously, Britain had dozens of individual rail companies, each serving particular regions. In 1923 they were grouped into the ‘Big Four’: the Great Western (GWR), London, Midland and Scottish (LMS), London and North Eastern (LNER) and Southern (SR) railways. And, crucially, each formed its own advertising department. Designers began to agree that a poster should be, above all, an advertisement, focused on delivering a clear message about a single destination. The quickest to embrace this – and the more focused style that came with it – was the LNER. Instead of commissioning fine artists, the LNER hired people from the commercial and industrial art worlds – like Fred Taylor, whose work is shown here. Unlike earlier British posters, it features block colours, thick black lines and a strong focus on shadow and light. The text is minimal and set apart from the image. “The lettering would have all been hand-drawn by the designers, which means they have more flexibility with the placing of the letters,” Churcher says. “And there are small imperfections, which is appealing.” (Credit: NRM/Pictorial Collection/Science & Society Picture Library) 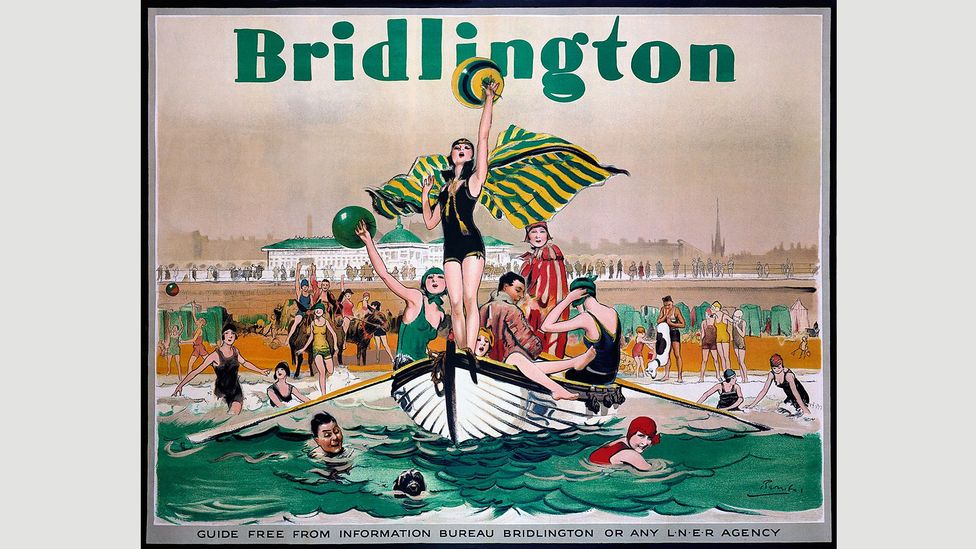 The hairstyles, the outfits, the hale physiques: this 1928 LNER ad is quintessential 1920s. But some elements endured for decades, like the slightly-risqué ‘bathing beauties’, who got their start in the 1910s and were used frequently into the 1960s. In this case, look closely at their faces: William Barribal, a commercial artist who had worked for Schweppes’ and Vogue, used his wife as a model for every face on the poster, Procter says. (Credit: NRM/Pictorial Collection/Science & Society Picture Library) 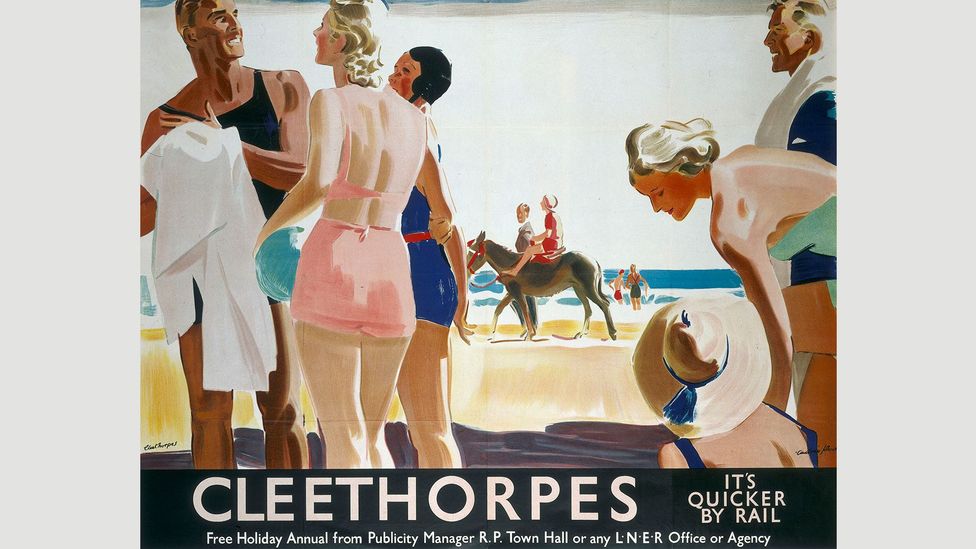 Andrew Johnson’s 1932 LNER poster repeats some of the same elements as the Bridlington – the strong bodies, a beach ball, a child riding a donkey – that underscore the idea of the British seaside as a fun, family-friendly destination. But the style is less detailed. The brush strokes are broader and freer. And the font is now the one most associated with the LNER: Gill Sans, a clean, clear typeface that was released in 1928 and adopted by the LNER in 1929. Meanwhile, Procter points out, by the 1930s, road transport, and coach companies in particular, started to compete with the railways. As a result, imagery and slogans became even more explicitly pro-rail: in this case, “It’s quicker by rail.” (Credit: NRM/Pictorial Collection/Science & Society Picture Library) 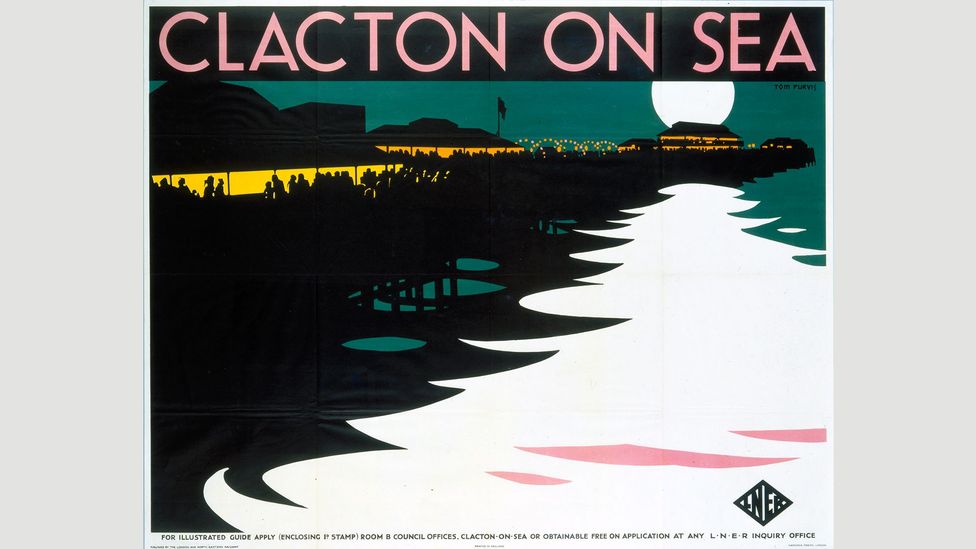 “Tom Purvis was probably the most experimental of all the British artists that work for the railway companies,” Churcher says. “I think of all of the artists, he creates the most stylish graphics.” Purvis, who produced more than 100 posters for the LNER and frequently wrote and lectured on the modern principles of graphic art, was a master of block colour, removing details to focus light and dark. He left the viewer only with the most essential imagery – even to the point of abstraction. His freedom to create such pared-down designs, like this 1930s poster, was also a benefit of working with the LNER. The other railways, Procter says, involved local authorities, who often insisted posters were more traditional, or cluttered with the images of the area’s attractions. (Credit: NRM/Pictorial Collection/Science & Society Picture Library) 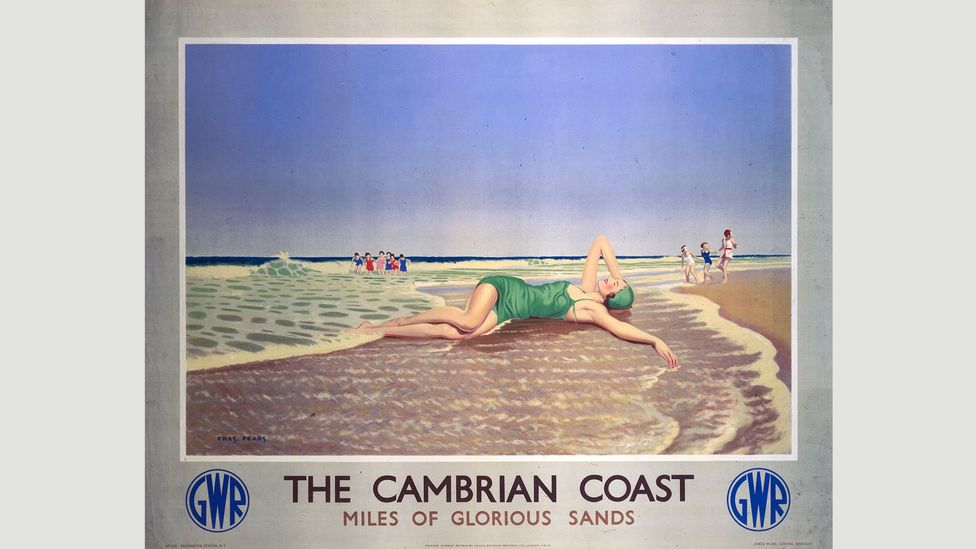 Charles Pears, who created this poster for the GWR in 1938, came from a more traditional artistic background than Purvis; he made his name with illustrations of ships and served as the first president of the Society of Marine Artists. Still, “there’s a little bit of the more modern style coming through”, says Procter, particularly with the big block blue sky that takes up half the image. Another more recent development is the tranquillity of the beach. Most posters at the time underlined the idea that their destination was the crowded, fun place to see and be seen. Here, unusually, was the idea of ‘getting away from it all’. The slightly seductive pose of the lone woman is counterbalanced by the children in the background, who project a more conservative, family-friendly message. (Credit: NRM/Pictorial Collection/Science & Society Picture Library) 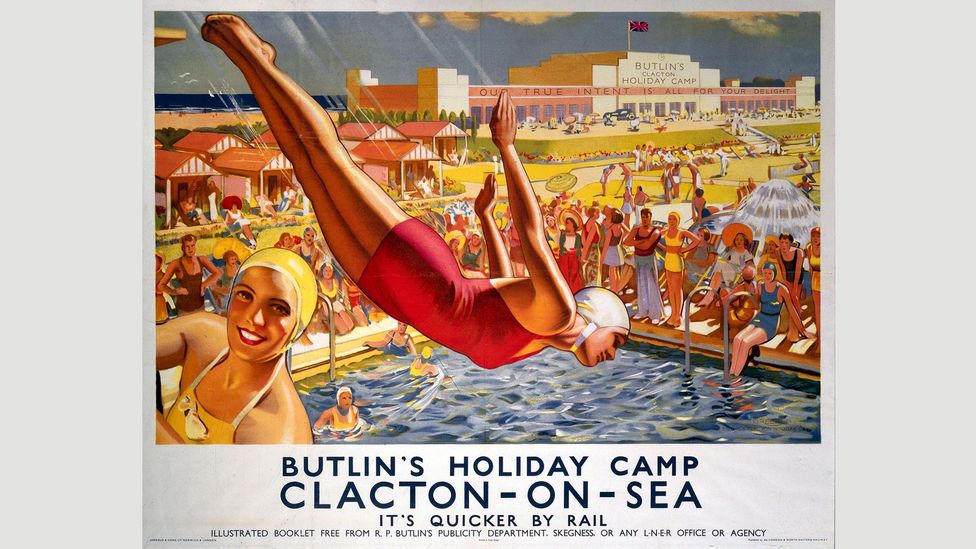 For most campaigns, though, crowds were still key. J Greenup’s 1940 poster of a packed lido seems Hollywood-inspired, says Procter, in how it draws on the era’s popular synchronised swimming film sequences. At the same time, the image is “very dream-like,” he says. “The war has started, and this has an element of escapism.” Despite a great amount of detail, any imperfections are erased (even the diver’s limbs are so smooth they look plastic) and a focus on fun and cheer that seems highly idealised – even for an advertising poster. (Credit: NRM/Pictorial Collection/Science & Society Picture Library) 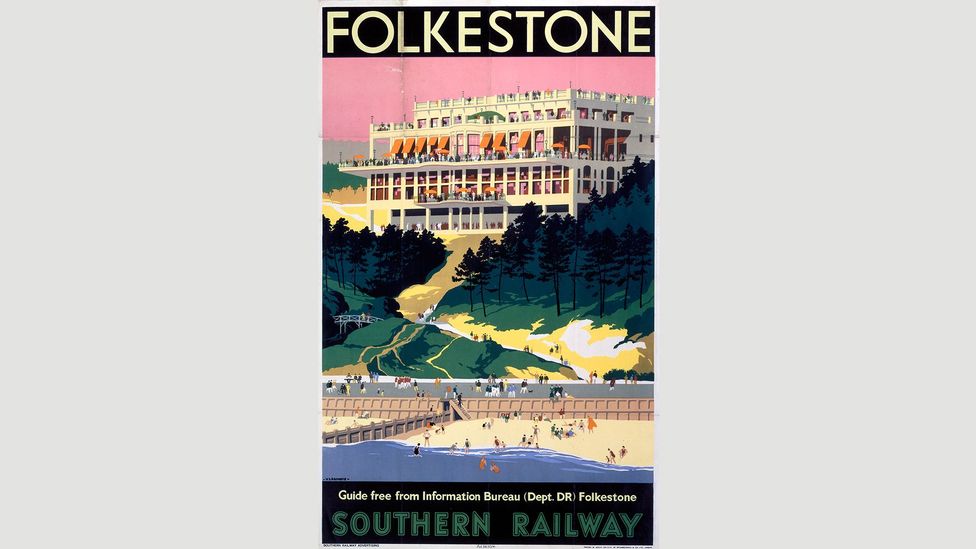 “This is when the railway starts to embrace more modern palettes and modern techniques,” says Procter. Verney L Danvers, who had worked in the fashion and commercial industries, took a more impressionistic approach to this 1947 poster, with its pink sky and yellow grass. “But it’s a sophisticated impression,” Procter says, one appealing to a different crowd than the boisterous fun-seekers of Clacton-on-Sea. “It almost has the look of the Riviera about it.” (Credit: NRM/Pictorial Collection/Science & Society Picture Library) 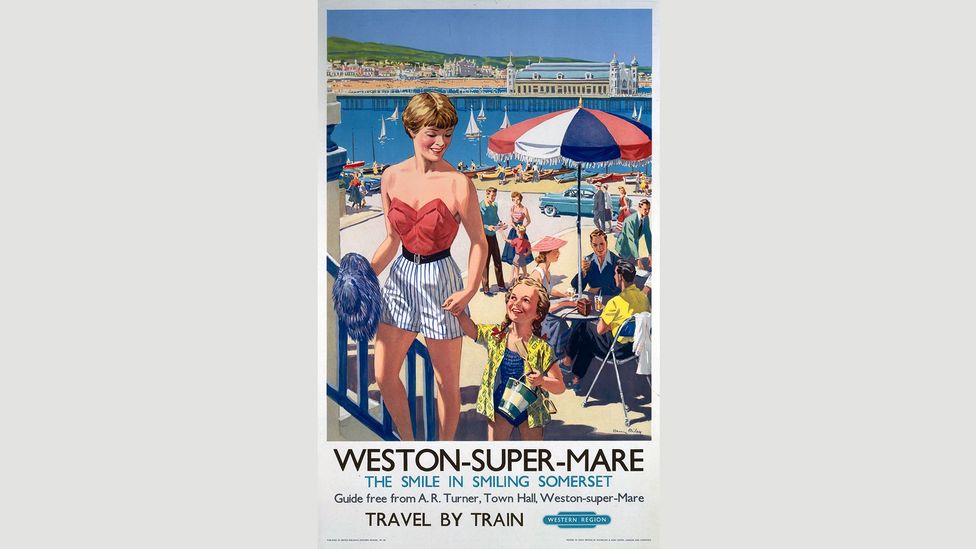 In 1948, the railways became state-owned. That, combined with the period’s social conservatism, led to a return to more traditional art in tourism posters, like this 1952 ad by Harry Riley. “They became more like illustrations of the areas and types of things you might do on your holiday, opposed to what Purvis was doing – which was being more symbolic, and creating an advertisement which was supposed to really draw you in,” Churcher says. The poster’s healthy figures and happy families also may speak to advertising’s power of wishful thinking: the UK had lost nearly half a million people in World War Two, and food rationing would not end for two more years. (Credit: NRM/Pictorial Collection/Science & Society Picture Library) 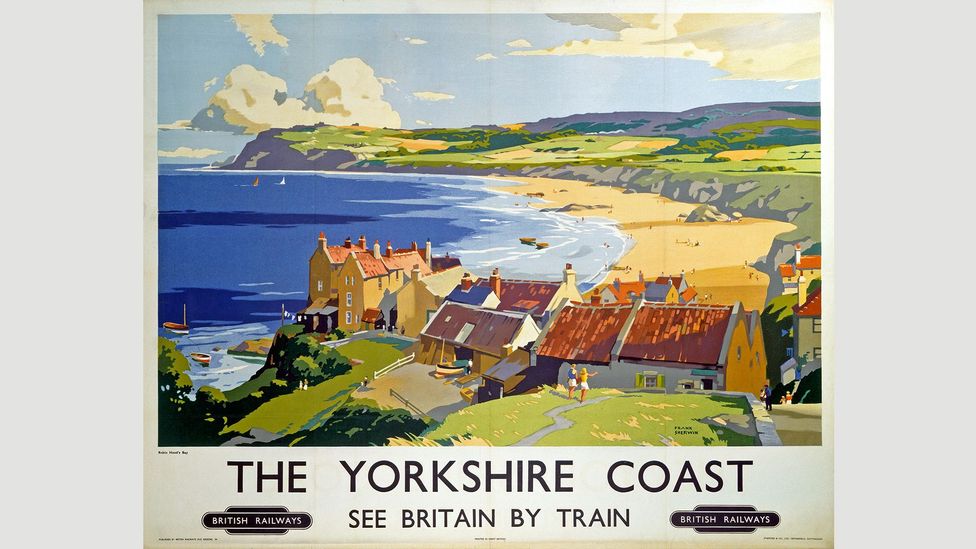 Other posters drew on tradition in a different way: by returning to landscapes, which had been used since the 19th Century. Still, this one, designed by Frank Sherwin in the 1950s, had a slightly more modern twist. “Some of the elements of the Purvis and Folkestone posters are there – the bright colours, the integrated graphics,” Procter says. “But the imagery is very calm; this is the sort of landscape you can lose yourself in. There’s a kind of nostalgia about it.” Only in the 1960s and ’70s, when posters began to be based on typography, would the landscape tradition really be replaced. (Credit: NRM/Pictorial Collection/Science & Society Picture Library) 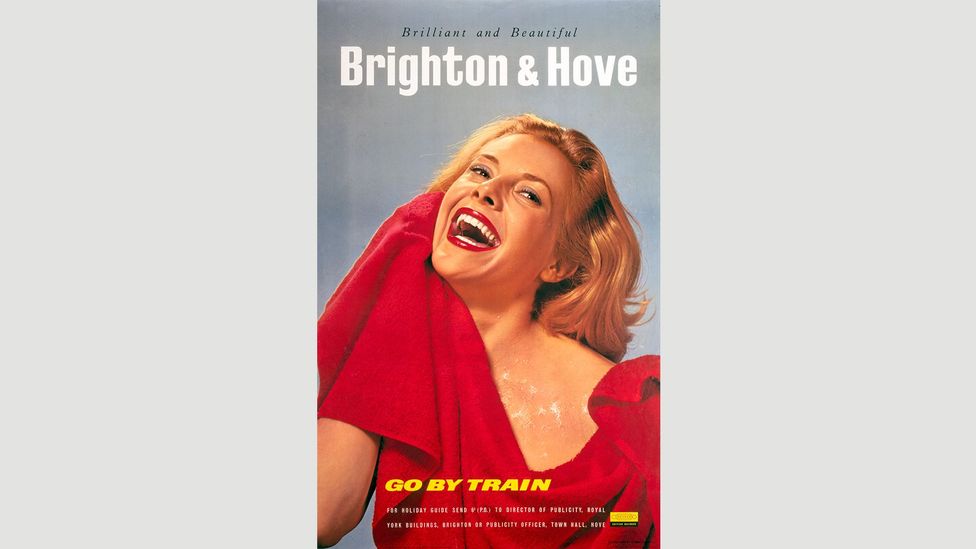 In the 1960s, artists began to use photographs, rather than hand-drawn lithographs. This 1961 photograph was shot by Joseph McKeown, a well-known celebrity and fashion photographer. The lettering is now integrated directly into the poster design, a shift that would continue into the 1970s. Some elements remain, particularly the bathing beauty idea – but now, the implication is she’s only wearing a towel. “She looks like something out of a ’60s film. She’s a bombshell,” says Churcher. Using women, she adds, “was something the railways thought would help draw people in. It hasn’t changed that much today, has it?” As much as we think of these posters as being retro, they may have more in common with today’s advertising campaigns than we think. (Credit: NRM/Pictorial Collection/Science & Society Picture Library)