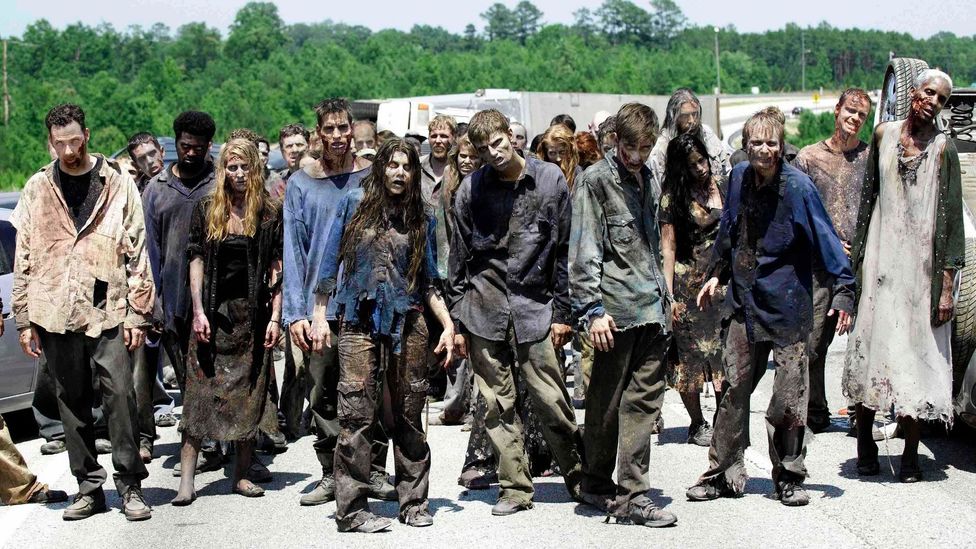 By Roger Luckhurst 31st August 2015
Our contemporary take on the lumbering undead is actually rooted in Voodoo folklore from the Caribbean, writes Roger Luckhurst.
F

Fans of the undead can hardly wait, because The Walking Dead, US TV’s highest-rated scripted drama, returns again this autumn for another season of grim survival amidst the zombie apocalypse. The series has proved so popular that there is now a spin-off series, Fear the Walking Dead, which just had the highest rated premiere in US cable TV history. The seventh Resident Evil film is due next year and even if the movie is subtitled The Final Chapter, one thing we know about the zombies is that they have the habit of always coming back. We are not done with this creature yet.

Where did all this come from? It is common to trace the contemporary zombie back to George Romero’s 1968 B-movie shocker, Night of the Living Dead. In fact, that film never uses the z-word and was a very loose adaptation of Richard Matheson’s vampire novel, I Am Legend, where the last human alive attempts to find a cure for the vampire virus. Histories of the zombie film always suggest a beginning further back, in Victor Halperin’s White Zombie, which first appeared in 1932 within months of Universal Studios’ famous adaptations of Frankenstein and Dracula. In White Zombie there are lots of laborious explanations of the zombie for the American audience because it transports into the popular culture a set of beliefs from Haiti and the French Antilles in the Caribbean. Today’s zombie is the result of the translation of this exotic zombie from the colonial margins to the imperial centre. 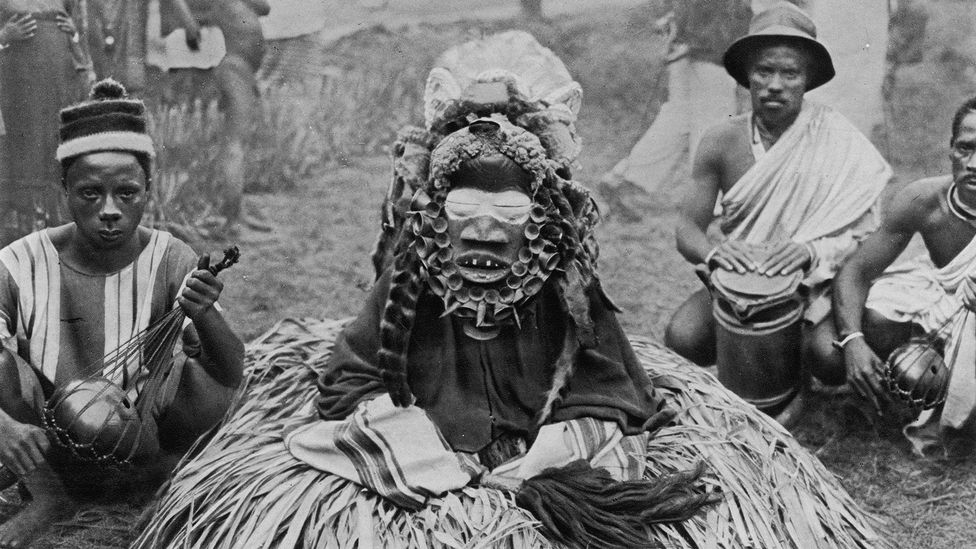 Voodoo carries metaphorical and political weight – ‘Papa Doc’ Duvalier, the president of Haiti from 1957 to ‘71, even claimed to be a houngan, or priest (Credit: Alamy)

There is some speculation that the word derives from West African languages – ndzumbi means ‘corpse’ in the Mitsogo language of Gabon, and nzambi means the ‘spirit of a dead person’ in the Kongo language. These were the areas where European slavers forcibly transported vast numbers of the population across the Atlantic to work in the sugar cane plantations of the West Indies, the vast profits of which motored the rise of France and England to world powers. The Africans took their religion with them. However, French law required slaves to convert to Catholicism. What emerged was a series of elaborate synthetic religions, creatively mixing elements of different traditions: Vodou or Voodoo in Haiti, Obeah in Jamaica, Santeria in Cuba.

The zombie, in effect, is the logical outcome of being a slave

What is a zombie? In Martinique and Haiti it could be a general term for spirit or ghost, any disturbing presence at night that could take myriad forms. But it has gradually coalesced around the belief that a bokor or witch-doctor can render their victim apparently dead – either through magic, powerful hypnotic suggestion, or perhaps a secret potion – and then revive them as their personal slaves, since their soul or will has been captured. The zombie, in effect, is the logical outcome of being a slave: without will, without name, and trapped in a living death of unending labour.

Dawn of the dead

The imperial nations of the North became obsessed with Voodoo in Haiti for one very good reason. Conditions in the French colony were so dreadful, the death rate amongst slaves so high, that a slave rebellion eventually overthrew their masters in 1791. Re-named Haiti from the French Saint-Domingue, the nation became the first independent black republic following a long revolutionary war in 1804. From then on it was consistently demonised as a place of violence, superstition and death because its very existence was an offence to European empires. Throughout the 19th Century, reports of cannibalism, human sacrifice and dangerous mystical rites in Haiti were constant. 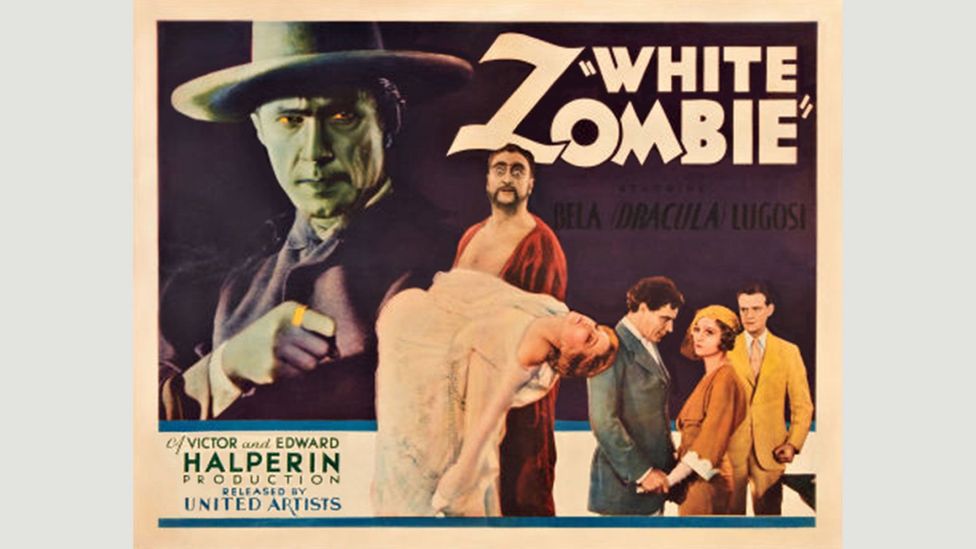 The concept of the zombie in Voodoo folklore could be seen as a metaphor for slavery – but it was co-opted by American filmmakers for horror movies (Credit: United Artists)

It was only in the 20th Century, after America occupied Haiti in 1915, that these stories and rumours began to coalesce around the ‘zombie’. American forces attempted a systematic destruction of the native religion of Voodoo, which of course only reinforced its power. It is significant that White Zombie appeared in 1932, right at the end of the American occupation of Haiti (the troops left in 1934). America went in to ‘modernise’ a country they considered backward – but instead returned home carrying this ‘primitive’ superstition.

This was not just an imaginary Gothic thrill: zombies, they claimed, really existed

American pulp magazines of the 1920s and ’30s were increasingly full of tales of the vengeful undead, climbing out of the grave and chasing down their killers. These had once been immaterial spectres: now they were the very physical form of rotting corpses said to be lurching out of Haitian cemeteries.

However, it wasn’t pulp fiction that really brought the zombie into the pantheon of the American supernatural. Two key writers at the end of the ‘20s not only travelled to Haiti but also – sensationally – claimed to have encountered actual zombies. This was not just an imaginary Gothic thrill: zombies, they claimed, really existed. 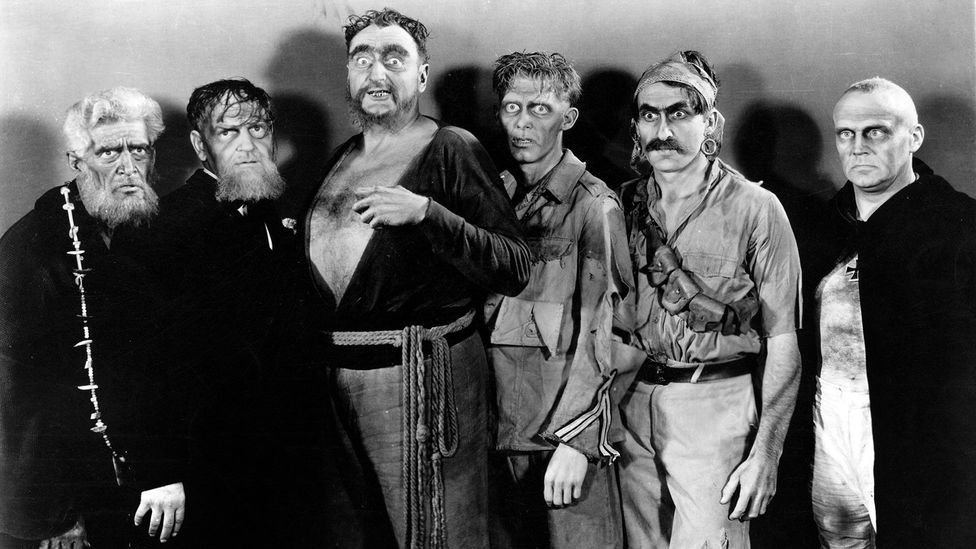 The US film White Zombie from 1932 is the cinema’s first exploration of zombie myth – it was followed by others, such as I Walked With a Zombie in 1943 (Credit: United Artists)

The travel writer, journalist, occultist and alcoholic William Seabrook went to Haiti in 1927 and wrote The Magic Island about his trip. Seabrook was a self-proclaimed ‘negrophile’ – a man who embraced ‘primitivism’ as an ecstatic escape from his privileged, white Southern origins. He had danced with whirling dervishes in Arabia and tried to join a cannibal cult in West Africa. In Haiti, he was soon initiated into Voodoo ceremonies and claimed to have been possessed by the gods. Then in one chapter called Dead Men Working in Cane Fields, the mention of zombies prompts a local to take Seabrook to the plantation of the Haitian-American Sugar Corporation and introduce him to the zombies who work the fields at night. “They were plodding like brutes, like automatons. The eyes were the worst. They were in truth like the eyes of a dead man, not blind, but staring, unfocused, unseeing.” Seabrook panics, momentarily, that all the superstitions he had heard are true, before plucking for a rational explanation: they were “nothing but poor ordinary demented human beings, idiots, forced to toil in the fields.” This chapter became the basis for White Zombie, and Seabrook often claimed he was responsible for bringing the word into the American vernacular.

A legend that won’t die

The other writer was the esteemed black novelist Zora Neale Hurston. Many of the Harlem Renaissance writers of the 1920s and ’30s were interested in Haiti as a model of black independence, and campaigned against American occupation. Hurston was more conservative and thought the occupation was a good thing. Rather more remarkably, Hurston trained as a professional anthropologist and was sent first to study ‘Hoodoo’ in New Orleans (the African-American version of Voodoo in the bayous) and then spent several months in Haiti, training to be a Voodoo priest. She became increasingly spooked by her experiences, although her anthropological reports are cagey about these moments. 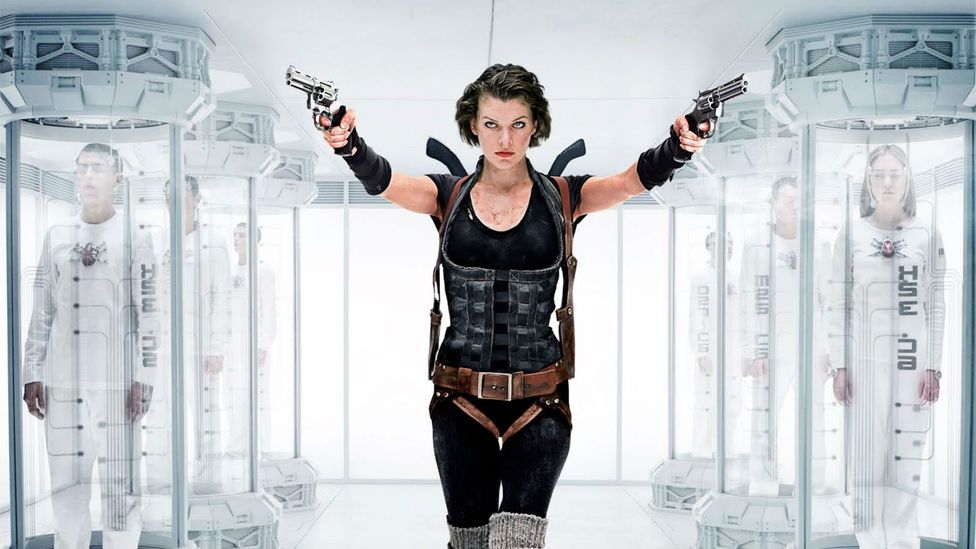 From Night of the Living Dead in 1968, zombies’ Haitian origins have been absent in US film and TV depictions, such as Resident Evil or The Walking Dead (Credit: Screen Gems)

Then in her informal travel book about Haiti, Tell My Horse (1937), Hurston not only informs us that zombies exist, but that “I had the rare opportunity to see and touch an authentic case. I listened to the broken noises in its throat, and then, I did what no one else has ever done, I photographed it.” The image of Felicia Felix-Mentor, the real life zombie, is indeed truly haunting. Pretty soon after this meeting, Hurston left Haiti hurriedly, believing that secret voodoo societies were intent on poisoning her.

Hurston was mocked for her credulity and her book was considered an embarrassment. If she did encounter a zombie in Haiti, the poor woman she captured with her camera might have been not so much an undead creature as a person who had suffered social death, cast out by her community and perhaps suffering from profound mental illness (Hurston met her in one of Haiti’s mental hospitals). Nevertheless, the historical trauma of slavery underpins this terrible condition of being emptied out of the self, a woman without attachments left shuffling through a living death.

The Walking Dead, too, carries the echo of this history. The series rarely makes much of the setting, but the various knots of survivors are passing through Georgia, through abandoned landscapes that once housed huge slave plantations. To understand the history of the zombie is to understand the anxieties this figure still addresses in contemporary American culture, where race remains a matter of deadly serious importance.

Roger Luckhurst’s Zombies: A Cultural History is just out from Reaktion Press