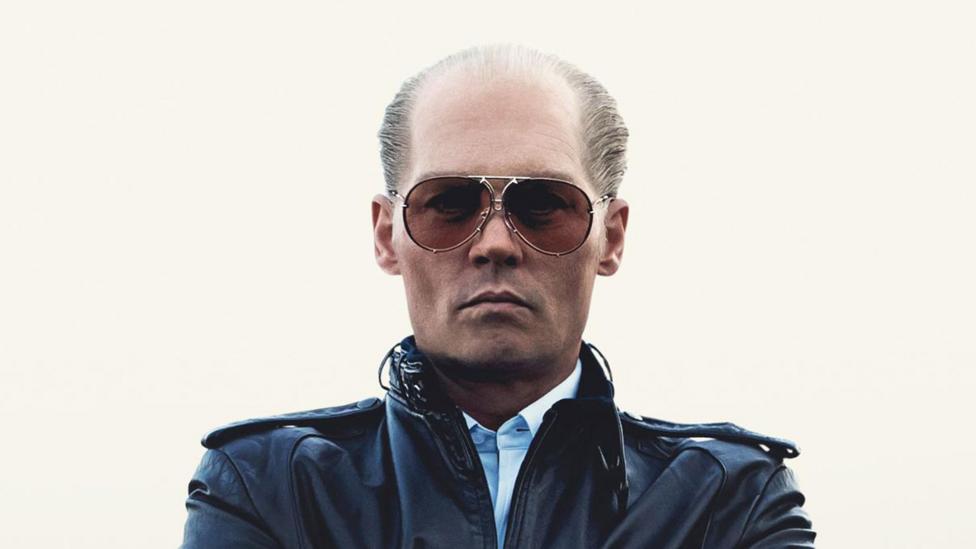 By Nicholas Barber 4th September 2015
Johnny Depp has made no secret of his love of the dressing-up box – but can he really impress? Nicholas Barber reviews his latest – a true-crime thriller – to find out.
J

Johnny Depp rarely resembles a human being these days. Whether he’s playing a pirate, an art dealer, or a Native American brave, he’s always flouncing around in a purple top hat, a spangly waistcoat and stripy pantaloons, his godlike features buried under layers of make-up and facial hair, his accent borrowed from a 1940s farce. Black Mass, you might think, would be a change and a challenge for him, in that it allows him to play a real, still-living person. But the story of James ‘Whitey’ Bulger is so astonishing it’s hard to believe that he actually exists.

According to Scott Cooper’s true-crime thriller, Bulger was a racketeer in south Boston in the 1970s. His brother Billy (Benedict Cumberbatch) was a state senator, despite his iffy family connections. Even more amazingly, one of Bulger’s childhood buddies, John Connolly (Joel Edgerton) became an FBI agent who offered him a deal. In exchange for providing information about the area’s Italian mafiosi, Connolly would disregard Bulger’s increasingly brutal and lucrative villainy. Premiered the day after Spotlight, Black Mass is the second film at the Venice Film Festival to present Boston as a city mired in toxic cronyism – and the second to present the Boston Globe newspaper as the only institution willing to clean it up.

Cooper’s film starts well, skipping past Bulger’s early life to show him as a middle-aged local hero. He has served nine years in Alcatraz, but old ladies dote on him, barflies respect him, and he is loved by his wife (Dakota Johnson) and son, even if his parenting skills could be improved. It’s fine to punch classmates, he tells the boy, just as long as no one is watching.

From then on, Black Mass is never bad, but, given the gob-smacking true story, it’s disappointing that it’s not great. It’s a handsome post-Scorsese gangster biopic with flavourful supporting performances and a strong sense of place, but it never takes off with the velocity of the film it most resembles, American Hustle.

Cooper doesn’t seem sure of which plot he wants to follow. At the opening of Black Mass – an irrelevant title – he devotes a lengthy sequence to one of Bulger’s toughest lieutenants (Jesse Plemons), but after that we barely glimpse him. The little matter of Bulger’s brother being a prominent politician, meanwhile, is so tangential that it could have been edited out altogether – as Sienna Miller’s role as Bulger’s girlfriend was. Presumably Cooper and his screenwriters, Jez Butterworth and Mark Mallouk, had to be careful not to libel Billy Bulger, who had a distinguished career in public service, but if the two brothers ever assisted each other in their work, there’s no hint of it here.

The relationship between Bulger and Connolly is strangely under-developed, too. From the start, Connolly worships his playground idol, despite receiving nothing but contempt in return, but that doesn’t explain why an FBI agent would have no qualms whatsoever about covering up murder after cold-blooded murder.

As for Bulger, the FBI’s protection apparently lets him blossom from small-time hoodlum to major crime kingpin, but there’s scant evidence of this progression. However successful he becomes, he never grows out of the grisly executions we see again and again throughout the film. Depp certainly conveys Bulger’s chilling menace, mind you. He is so reptilian that you keep expecting his tongue to flick out and catch a fly. But, considering his Blofeld-worthy habit of bumping off his subordinates, it seems ridiculous that anyone put up with the slimy psychopath for as long as they did.

Then there’s Depp’s hair and make-up. Unable to resist the lure of the dressing-up box, he has a bald wig, brown joke-shop teeth, dazzling contact lenses, and skin more cadaverous than he had when he played a vampire in Dark Shadows. Was the real Bulger ever as odd as Depp is in Black Mass? Maybe he was, but the weirdness is undoubtedly distracting in a film which is otherwise so well-stocked with authentic-looking low-lives. The wait for Depp to resemble a human being again continues...