Loading
Television
Pride and Prejudice at 20: The scene that changed everything
Share using EmailShare on TwitterShare on FacebookShare on Linkedin 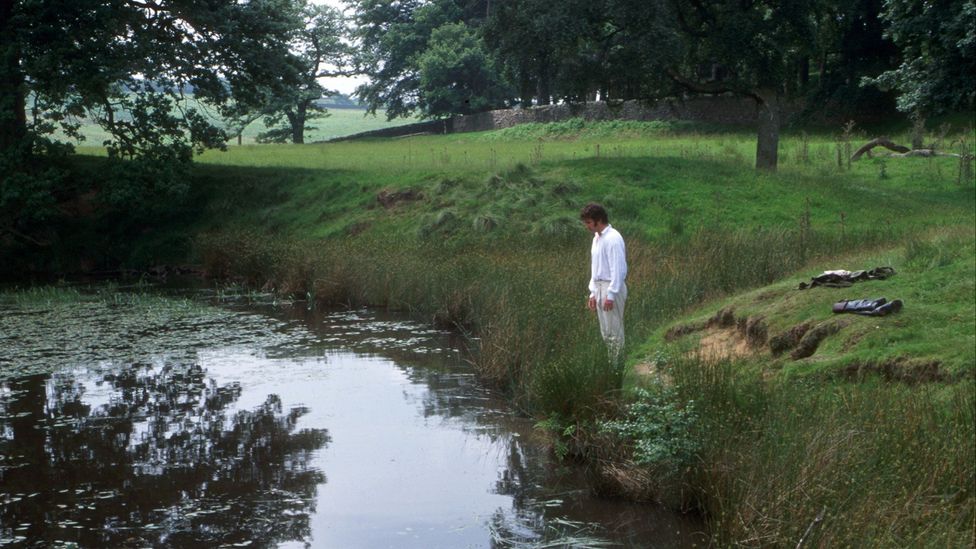 By Nicholas Barber 22nd September 2015
It is 20 years since Mr Darcy strode sodden from the lake in the BBC adaptation of Pride and Prejudice. Television – and Jane Austen – have never been the same, writes Nicholas Barber.

“I was reading an article in the Radio Times the other day,” says Andrew Davies. “The journalist was asking, ‘Why have all these classic serials got to be about the male lead getting his kit off?’ And I thought, ‘Hey! I started that!’”

It was Davies who wrote the screenplay for the BBC’s six-part adaptation of Jane Austen’s Pride and Prejudice, a series which first screened exactly 20 years ago. And it was Davies, not Austen, who had  Mr Darcy (Colin Firth) going for an impromptu dip in his private lake, before striding away in his clinging wet shirt and bumping into his future bride, Elizabeth Bennet (Jennifer Ehle). Ever since, it seems, the makers of every new BBC costume drama have included their own tribute to this moment, whether it’s Aidan Turner’s topless scything in Poldark, Richard Madden’s under-dressed carpentry in Lady Chatterley’s Lover, or Ben Batt’s skinny-dipping in The Go-Between. It’s fair to say that when Darcy dived into the water two decades ago, he made quite a splash.

But even before its brooding hero took the plunge in episode four, Pride and Prejudice was a sensation. Ten million viewers were glued to it; newspaper columns – most notably Helen Fielding’s Bridget Jones’s Diary, at that time a regular feature in the Independent before it was a hit book and film – were stricken by ‘Darcymania’. It was a truth universally acknowledged that there had never been a costume drama quite like Pride and Prejudice. The remarkable thing is that there hasn’t been one like it since, either. A Bollywoodised Bride & Prejudice followed in 2004, and Keira Knightley played Elizabeth Bennet in Joe Wright’s film in 2005. But however many Austen adaptations there are on the big and small screens, it’s the Davies version which they invariably try – and fail – to beat. 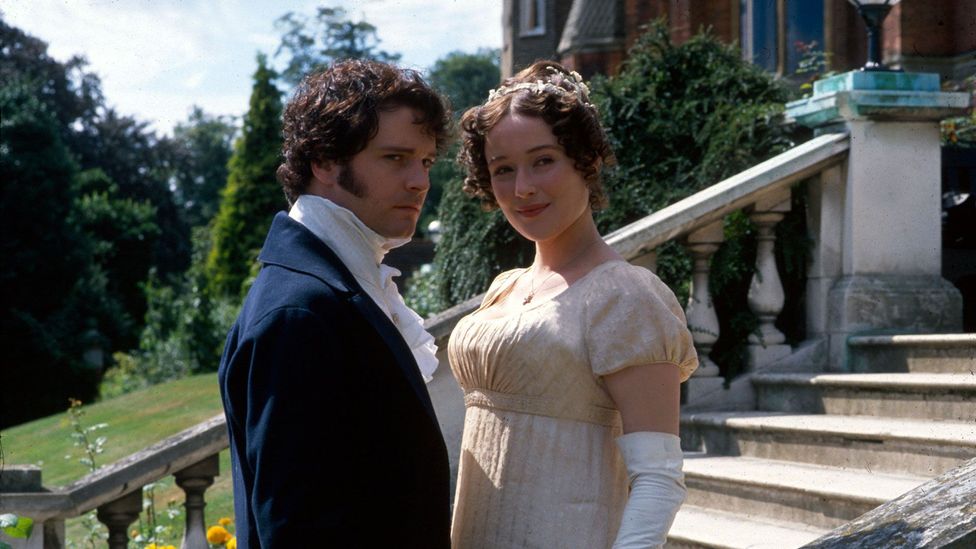 “It’s almost usurped the original novel in the minds of the public,” says Professor Deborah Cartmell of DeMontford University, the author of Jane Austen’s Pride and Prejudice: The Relationship Between Text and Screen. “Since it came out, every cultural reference to Jane Austen, and every adaptation, has had as much to do with Andrew Davies as it does to Austen.” Two recent comedies are clear examples. ITV’s 2008 series, Lost in Austen, and a 2013 film, Austenland, both revolve around Pride and Prejudice addicts – but the Mr Darcy they dream about is the damp one played by Firth. “I’ve taught the lake scene so many times,” says Professor Cartmell, “and when my students read the novel for the first time they are absolutely shocked that that scene isn’t in it.”

Still, there’s more to the series than soggy menswear. Professor Kathryn Sutherland examines Davies’ adaptation in her book, Jane Austen’s Textual Lives: from Aeschylus to Bollywood. For her, the key to the programme’s appeal is its combination of cinematic visuals and televisual pacing. “It has the same qualities that we associate with the big-screen Austen adaptations of the time, Ang Lee’s Sense and Sensibility and Douglas McGrath’s Emma, with Gwyneth Paltrow. Like them, it has moving cameras, quick cuts, open landscapes, and the emotional intensity of a strong musical score. But because it was broadcast over six weeks, it could keep us waiting for the happy ending, so there was a cumulative excitement and a public participation in it that you can’t get from a two-hour film.” 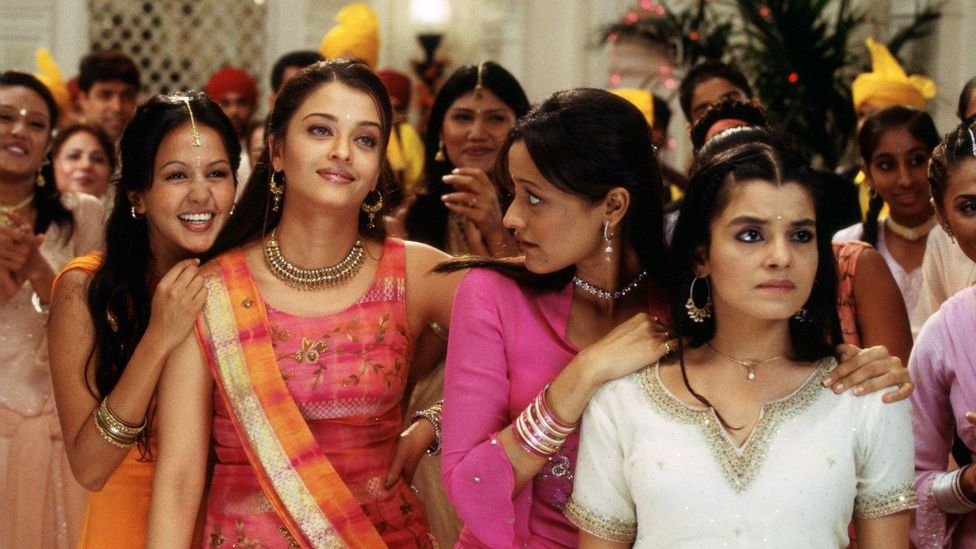 Among the many and various adaptations is Bride and Prejudice, Gurinda Chadha’s Bollywood-style take from 2004 (Credit: Miramax)

Prior to Pride and Prejudice, no one would have compared a British television costume drama to a feature film. “They were very well done,” says Davies of his predecessors’ efforts, “but at least 70% of the scenes were shot in studios, with quite wobbly sets, and with people standing around, buttoned up to their necks, making polite conversation.”

Davies and the series’ producer, Sue Birtwistle, had something else planned. Their Pride and Prejudice would get out of the studio and into the sun-dappled countryside. It would be shot entirely on 16mm film, rather than falling back on the cheaper film and video combination of earlier costume dramas. And, four years before The West Wing became known for its ‘walk-and-talk’ dialogue scenes, its characters would always be on the move, whether they were in carriages, on horseback or tramping through meadows.

It’s about young people and their hormones – Andrew Davies

“Sue and I talked a lot about this,” says Davies. “We wanted lots of energy in the show, and the book justifies it, because Elizabeth is always running about and going on long country walks and getting all flushed and sweaty and getting the bottom of her petticoat muddy, which seems to be quite a turn-on for Darcy. So we thought, let’s make it as physical as we can without being ridiculous about it. Let’s remind the audience that this isn’t just a social comedy – it’s about desire and young people and their hormones – and let’s try to find ways of showing that as much as possible. So for the girls I wrote a lot of scenes where they’re backstage, so to speak: they’re getting dressed, they’re in their nighties, talking about love. And we wanted the guys to be doing lots of physical things: riding horses, fencing, having baths, jumping in the lake. Any legitimate excuse to get some of that kit off.”

In bringing this youthful dynamism to the screen, Davies and Birtwistle had some invaluable collaborators. Simon Langton, the series’ director, keeps the action flowing so elegantly that it’s astonishing, in retrospect, that he wasn’t snapped up by Hollywood. Carl Davis’s sprightly theme music whisks the listener along like a leaf in a breeze, immediately assuring us that Pride and Prejudice won’t be dusty and educational: it will be fun. And Ehle’s Elizabeth Bennet sends the same message. Her vivacious performance tends to be overshadowed by the Firth-inspired Darcymania, but every time she giggles or raises her eyebrows, she lets us know that Elizabeth is laughing at all the snobbery around her, so it’s OK for us to laugh too.

But however important Langton, Davis and Ehle’s contributions were, it was Davies who instilled the series with thrilling vitality, beginning with its very first scene. “The obvious way to start,” he says, “would be with a scene set around the breakfast table with Mr Bennet saying, ‘I see there’s a new family in the area.’ But I didn’t want to do that. Also, I wanted to make the adaptation very pro-Darcy, so I thought, ‘Let’s start with him and Bingley galloping along on their horses – nobody has ever done that before. And that’s the thing that sets the whole story off: Bingley seeing Netherfield Hall and being rich enough to make the snap decision to rent it for the season. Then I thought, ‘Let’s have Elizabeth on a hillside seeing these two tasty blokes galloping along, and something about them makes her skip down the hill’. I can remember writing those first pages and thinking, ‘This is a bit different from the usual Jane Austen adaptation’. I ran upstairs and showed them to my daughter, who was revising for her A-levels. I said, ‘What do you think of that? She said, ‘Very good, Dad,’ because she’s been trained not to say, ‘That’s crap, Dad.’ And those pages gave me a lot of confidence to charge on with it all at that pace.” 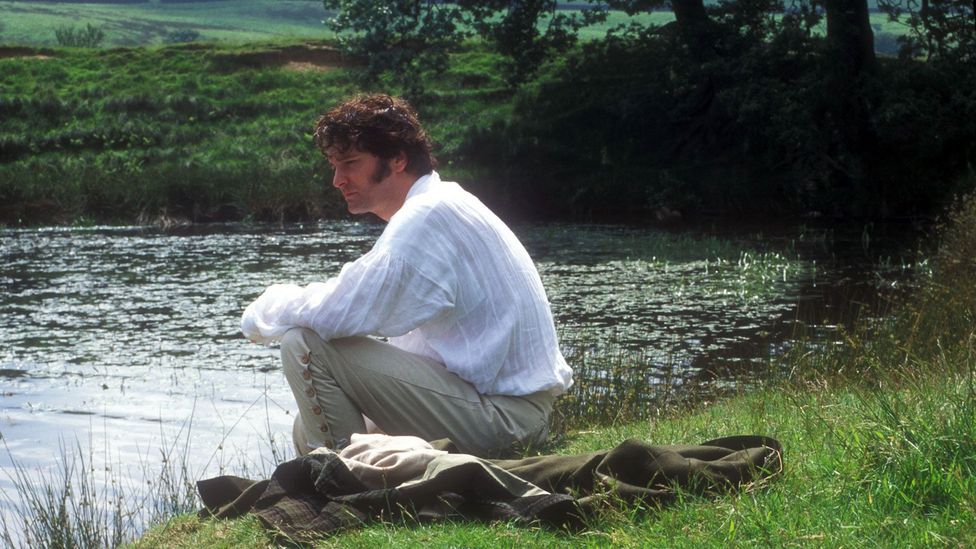 “It’s fair to say that when Darcy dived into the water two decades ago, he made quite a splash.” (Credit: BBC)

And so we come to the lake scene, which, Davies maintains, was never intended to spark Darcymania. “When women started pinning Colin’s picture on their walls, it was a puzzle and a surprise,” he says, “because I just thought it was a funny scene. It was about Darcy being a bloke, diving in his lake on a hot day, not having to be polite – and then he suddenly finds himself in a situation where he does have to be polite. So you have two people having a stilted conversation and politely ignoring the fact that one of them is soaking wet. I never thought it was supposed to be a sexy scene in any way.”

Whether the writers of Poldark, Lady Chatterley’s Lover and The Go-Between can make the same claim is another matter.