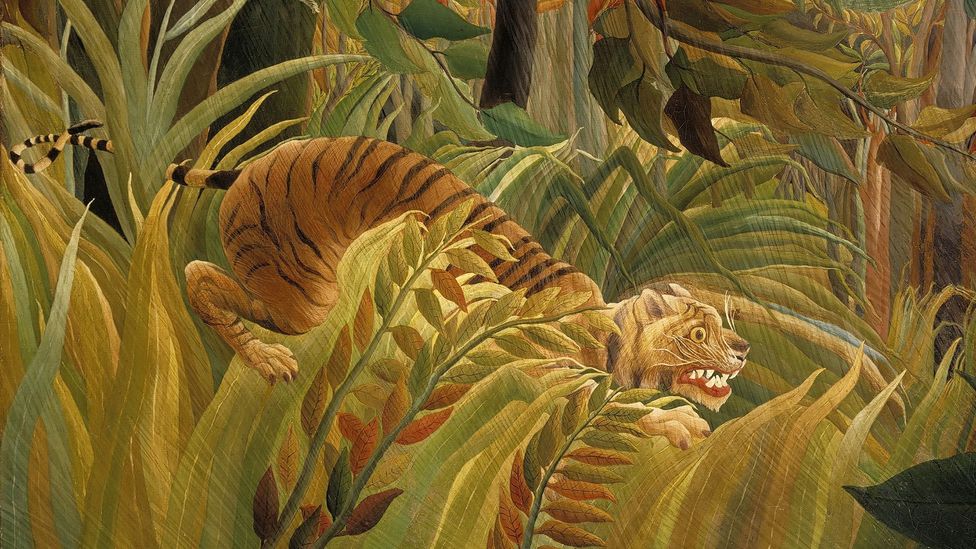 By Alastair Sooke 2nd October 2015
The self-taught painter Henri Rousseau was mocked for his clumsy compositions and awkward perspectives. But if he had been trained, modern art as we know it might never have happened, writes Alastair Sooke.
I

Imagine an abundant jungle, tangled with foliage of sumptuous green. Before you, like actors on a stage, a famished lion sinks its fangs into an antelope. Meanwhile, in the undergrowth, a menagerie watches the horror unfold: a panther, two birds of prey dangling strips of flesh from their beaks, and, to the left, a lumbering, lurking, ape-like beast, half-emerging from the forest, with a shaggy pelt and a shining eye. In the distance a blood-red sun sets on this menacing scene.

This vast canvas – more than three metres wide – is The Hungry Lion by Henri Rousseau, one of the most curious characters in modern art. The painting has travelled to Essen in Germany, to be part of The Shadow of the Avant-Garde, a new exhibition at the Museum Folkwang, in which Rousseau will play a starring role. 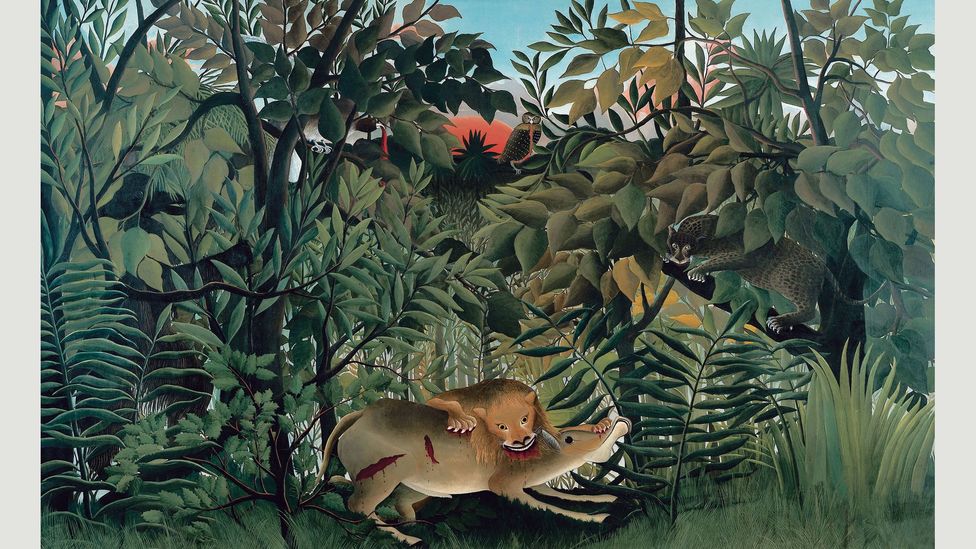 The Hungry Lion shocked and was mocked by critics when it was shown at the Salon d’Automne in 1905 (Credit: Fondation Beyeler, Riehen/Basel, Sammlung Beyeler)

Towards the end of his life, around the turn of the 20th Century, Rousseau was taken up and championed by artists at the vanguard. “There is the truth and future! There is painting!” Gauguin supposedly exclaimed in front of his self-portrait, while Picasso bought several of Rousseau’s paintings, which he later gave to the Louvre in Paris.

In 1905, The Hungry Lion was presented to the public at the Salon d’Automne, an annual alternative to the official Salon of Paris, alongside violently colourful new works by a group of artists including Matisse and Derain. One critic was so shocked by the intensity of their paintings that he called these younger artists “fauves”, or wild beasts – inspired, perhaps, by the imagery of Rousseau’s picture.

Yet surprisingly, given his subsequent reputation as the godfather of modern art (or, as one artist and critic put it, “the alpha and omega of painting”), Rousseau was entirely self-taught.

The sublime and the ridiculous

Born in 1844 in the French town of Laval, Rousseau led a mostly unremarkable life. For more than two decades, he worked in the Parisian customs service, earning himself the half-mocking nickname of “le douanier” (the customs officer). Why he decided to take up painting around the age of 40 remains obscure – perhaps it was to while away the boring hours of inactivity that were part of the job.

In 1886, though, out of the blue, he showed four astonishing paintings at the Salon des Indépendants, the principal exhibition venue for the Post-Impressionists. Although they were rubbished, and much of his later work was ridiculed too (“Backs jostle in front of his entries, and the place rocks with laughter,” one critic wrote), Rousseau doggedly submitted work to the Salon every year for the rest of his life, except 1899 and 1900.

“Monsieur Rousseau paints with his feet, with a blindfold over his eyes,” one critic spat. Another remarked, in 1889, that he had “never seen anything more grotesque” than Rousseau’s portraits and Van Gogh’s Starry Night (which, in retrospect, hardly seems like bad company to be keeping). Rousseau pasted all of his negative reviews into a scrapbook.

King of the jungle

It is true that by the smooth, sleek standards of 19th Century academic painting, Rousseau’s pictures looked rough and rude. His figures and compositions were awkward and clunky, he had no sure grasp of perspective, his use of colour – especially black – was idiosyncratic, and he was incapable of painting feet. Look at the strangely contorted limbs of his stiff Football Players of 1908: as an artist, he could seem naive in the extreme.

How did such a ham-fisted bungler become a celebrity of modern art?

In the end, his paintings secured him lasting fame – especially his fantastical, luxuriant jungle scenes, which, with the exception of the tapestry-like Surprised!, also known as Tiger in a Tropical Storm (1891), Rousseau produced in the final six years of his life, before his death in 1910, aged 66.

How, then, did such a ham-fisted bungler become a celebrity of modern art? And did the fact that he was self-taught have anything to do with his transformation from Sunday painter to serious artist? 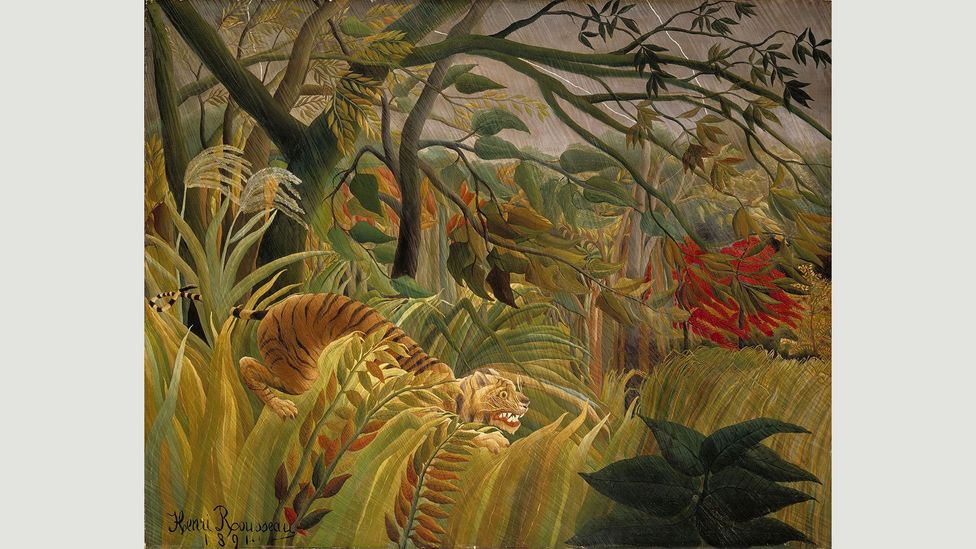 Rousseau’s Surprised! or The Lion in a Tropical Storm is the first of the jungle scenes that made the artist famous (Credit: Henri Rousseau)

Kasper König and Falk Wolf, the curators of the Museum Folkwang exhibition, which examines Rousseau in the context of 12 other self-taught artists who had an influence on modern art, such as the Cornish fisherman Alfred Wallis, believe that it did.

If Rousseau had been formally trained, König tells me, “He probably couldn’t have painted his famous jungle paintings, because he would have been told what to do and what not to do: there were rules. And Rousseau didn’t care about rules. He made his own. And [as a result] he had a definite influence on Matisse as well as Picasso – in a direct pictorial way.”

“In a sense,” agrees Wolf, “the point about being self-taught is not necessarily to follow the rules of academic painting. And this is, of course, also true with all great art.”

According to König, one radical aspect of Rousseau’s painting, which heralded Modernism, was the way he refused to hide his sources. Rousseau never travelled, so his strange jungle scenes were concocted in his imagination. His inspiration was the Jardin des Plantes, Paris’s botanical garden, which he frequently visited in order to make pencil studies: “When I step into the hothouses and see the plants from exotic lands,” he once said, “it seems to me that I am in a dream.” He also relied heavily upon a lavish album of 200 illustrations of wild animals published by the Galeries Lafayette department store. His ‘savage’ jungle visions, therefore, were informed by cultivated Parisian life – the same life that he also documented in countless views of the city.

Rousseau’s jungles have the widescreen impact of a movie

The strange thing is, he didn’t try to cover his tracks: Rousseau’s jungles don’t look like real jungles. But this doesn’t prevent them from having a powerful sense of mystery and allure. Indeed, many of them have the widescreen impact of a movie – an effect augmented, in the case of The Hungry Lion, by its full title, which reads like a film script: “The lion, being hungry, pounces on the antelope and devours it. Carnivorous birds have each torn a piece of flesh from the poor animal, which lets a tear escape. Sunset!” 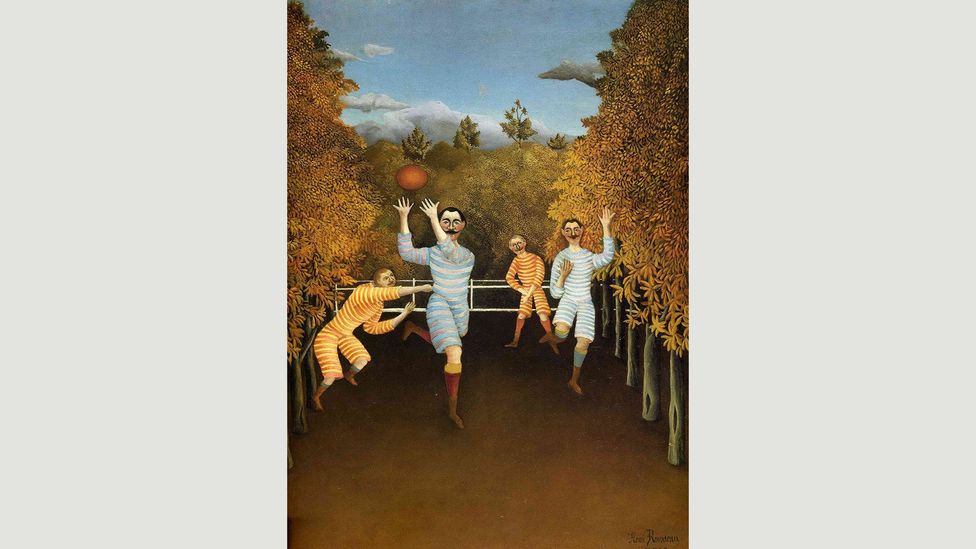 “Rousseau wasn’t interested in false illusion,” König says. “He wasn’t trying to hide something. Maybe, even, he wanted to show the source of where it all came from. He didn’t have to go to the jungle in order to paint the true jungle: it was about art, not illusion – and that was radical.”

Ultimately, though, Rousseau’s appeal for Modernists like Picasso lay in the ‘primitive’, untutored nature of his style. “Picasso wanted to draw and paint like a child, and he thought that because of his training at the academy in Spain, he never could,” the French curator Estelle Fresneau told me on the occasion of Tate Modern’s Rousseau retrospective in 2005. “So he was impressed by Rousseau because Rousseau’s style was pure. Rousseau never tried what people wanted him to do. Actually, I think that Rousseau was very clever. He was conscious that he was inventing a new way to paint.” Perhaps, then, the father of “naive art” wasn’t so naive after all.