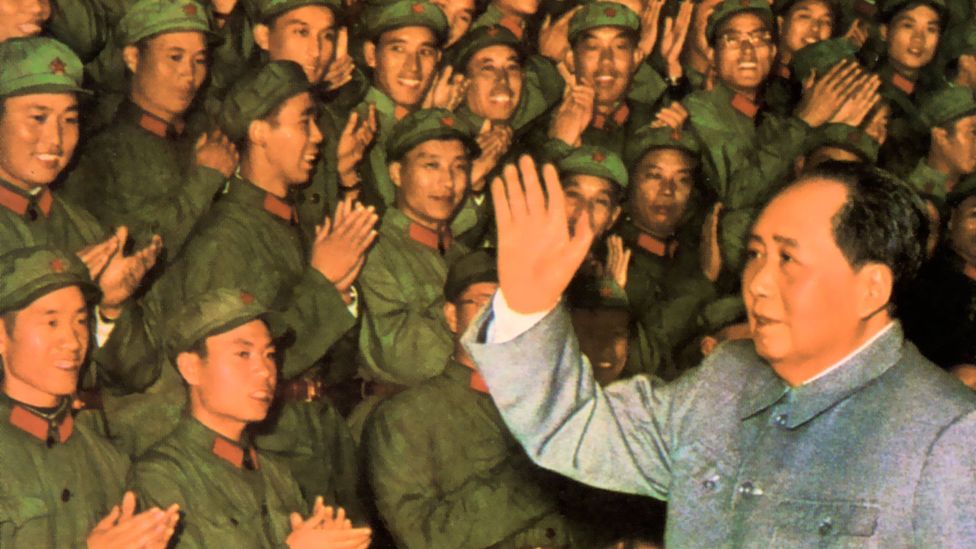 By Clarissa Sebag Montefiore 2nd November 2015
The Mao suit is associated with the austerity of the Cultural Revolution – and the villainy of Bond baddies. But some, including Xi Jinping, look to reclaim it, writes Clarissa Sebag-Montefiore.
O

On 1 October 1949, Mao Zedong stood victorious at the Gate of Heavenly Peace in Tiananmen Square, Beijing, to declare the founding of the People’s Republic of China. For the occasion – one that was to transform the lives of millions – the ‘Great Leader’ wore a loose tunic buttoned to a high collar, and baggy trousers. It was soon to be known the world over as ‘the Mao suit’.

The suit gained its notoriety through its connection with the Chairman, Chinese communism, and the people themselves, who would all eventually come around to wearing it. Yet the Zhongshan suit (as it is known in China) was first introduced by the Chinese nationalist revolutionary Sun Yat-sen. It was an alternative to both Western business dress and the richly decorated Manchu robe, worn by China’s last emperor, with its wasteful, feudalistic associations.

It was designed to project a new, confident China

The Mao suit, by contrast, was utilitarian. It was designed to project a new, confident China. Mixing Western and Eastern elements, it added a strong dose of androgynous militarism; most were a muted blue, green or grey. Woven into its design were hidden symbols. The four pockets on the jacket were said to signify the Four Cardinal Principles in the Chinese classic I Ching (Book of Changes): propriety, justice, honesty and a sense of shame. 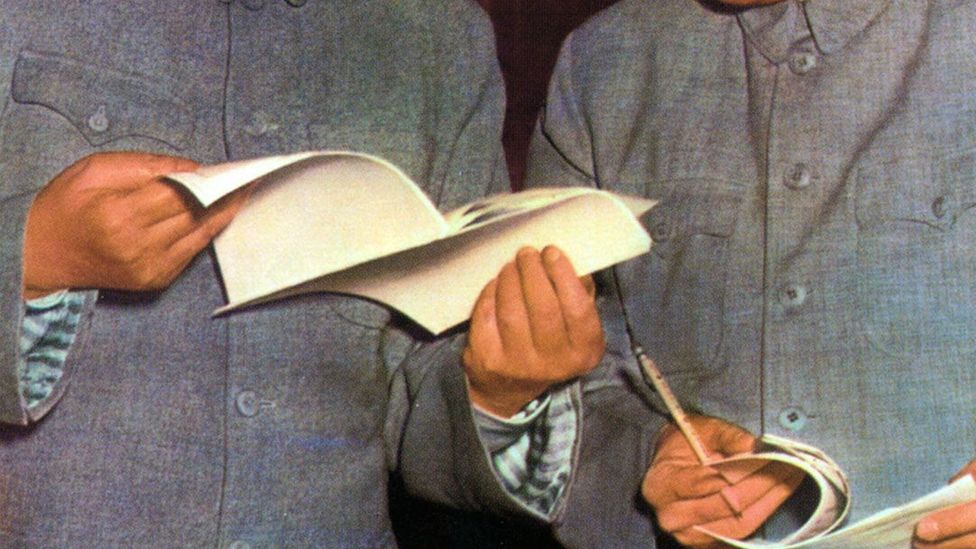 Mao Zedong and Zhou Enlai adopted the Zhongshan suit for its simplicity – and because it rejected both Western and Manchu styles of dress (Credit: Getty Images)

That Mao chose to wear the suit favoured by Sun Yat-sen – revered as the founding father of the modern Chinese nation – was significant. The style, Valery Garrett writes in her book Chinese Dress: From the Qing Dynasty to the Present, “bore strong connotations of power”; its appropriation “was seen as proof that [Mao] was inheriting Sun’s mantle of authority”.

By the time the catastrophic Cultural Revolution dawned in 1966 the Mao suit – with its abiding notions of nationhood – was one of the only acceptable forms of dress in China. This was an era in which wearing ‘bourgeois’ attire could result in being attacked in the street or worse. Items considered decadent, like jewellery, make-up and high-heels, were banned. As Garrett notes: “It was simply safer to wear the Mao suit.” 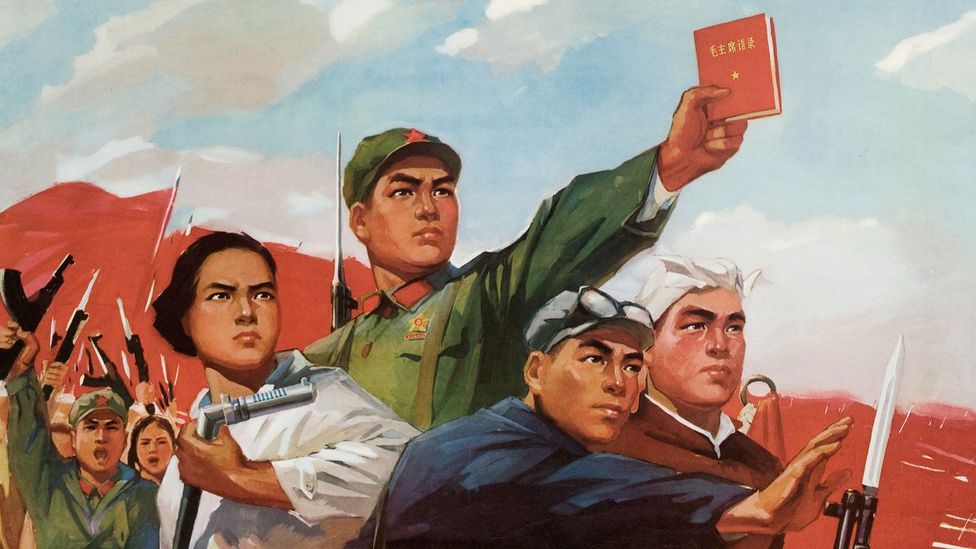 During the Cultural Revolution, the Mao suit was one of the only politically acceptable garments to wear – it was a uniform for the Red Guards (Credit: GraphicaArtis/Getty Images)

Men and women dressed as inconspicuously as possible in clothes that were serviceable and sexless. For women in particular, the suit signified that the battle for Mao’s ‘permanent revolution’ was more important than any superfluous concerns over appearance. It was “a practical garment for furthering the revolution”, says Amy Barnes, author of Museum Representations of Maoist China: From Cultural Revolution to Commie Kitsch. “It’s about saying, I reject bourgeois and Western notions of beauty and dress and fashion. It’s about uniformity. It’s about conformity.”

The Mao suit was also, supposedly, about classlessness. In reality different cuts demonstrated differing statuses. In the early 1950s salaries were replaced with rationing. While lowest ranking officials had to make do with a Mao suit made from itchy grey cloth, and middle ranking officials from polyester, those who stood at the top of the food chain received suits in more luxurious wool. A higher number of pockets also signified a higher political status and rank.

Following Mao’s death in 1976, the suit’s influence began to wane. China’s opening up and reform reinserted choice into daily life, from work to clothes. But the suit has retained its strong hold on the imagination. China: Through the Looking Glass, a recent exhibition at New York’s Metropolitan Museum of Art, addressed Western fantasies about China through fashion. On display were adaptations of the Mao suit; the jacket is the “last sartorial symbol of China,” curator Andrew Bolton told The Washington Post. “Subsequently, no other item of clothing screams China to the West.”

Images of colossal crowds made up “of Red Guards with their little red books marching towards a bigger, better future with the sun [rising] behind them,” have become iconic, says Harriet Evans, a professor of Chinese Cultural Studies at the University of Westminster. And as those images spread abroad the Mao suit, likewise, infiltrated the Western imagination.

Today – aside from a nostalgic urbanites with large dose of irony – few, if any, young Chinese wear the Mao suit. But Westerners have, over the years, adopted the suit for their own. In the 1960s and ‘70s, when socialism and communism were in vogue, it became fashionable for left-wing intellectuals to wear the Mao suit to signify their political leanings. Before the full horrors of Mao’s reign came to light, the anti-establishment outfit implied an idealistic utopianism in which all were equal.

In the Bond films the suit represents a blandly clad evil

The Mao suit, buried deep in the Western psyche, has also represented something more malignant. In the James Bond movies depraved supervillain Ernst Stavro Blofeld, craving world domination, dons a jacket in khaki with a Chinese collar based loosely on the Mao suit. Franz Oberhauser (played by Christoph Waltz) wears something similar in the new Bond film Spectre. In both cases the suit represents a blandly clad evil, where the mantle of power can all too easily become abused. 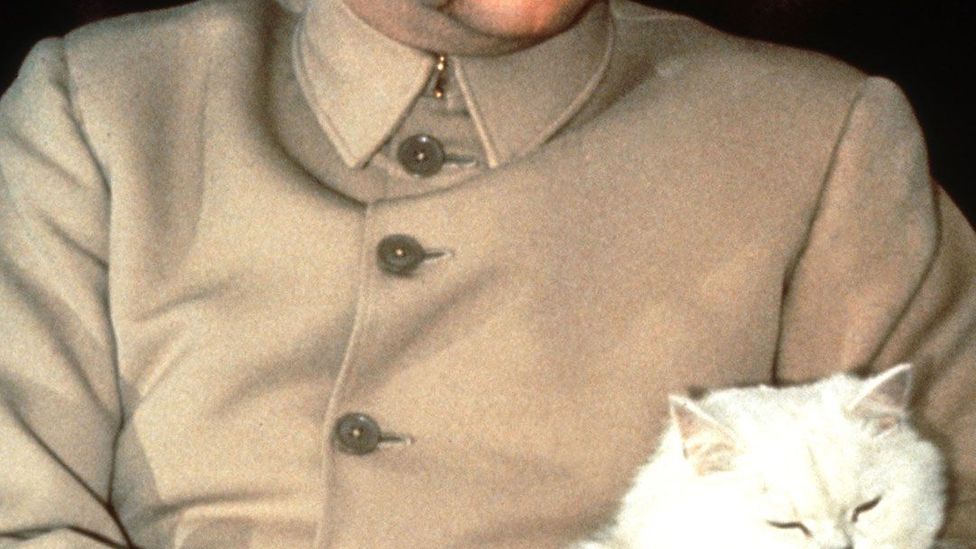 Western fashion designers, attracted by the Mao suit’s notions of rebellion and morally infused functionalism, have also subverted it.

In 1999, John Galliano redesigned the Mao suit for his Dior spring/summer collection, mocking its proletarian roots by rendering it in opulent green silk with red satin ribbing. In 1994, David Tang, founder of the fashion brand Shanghai Tang, offered suave, sophisticated Mao suits in neon pink and green silks and velvets, bringing it violently into the modern world. In 2012 Vivienne Westwood adopted the Mao suit, this time with a sexier edge in cotton poplin, conjuring up a femininity the original could never muster. 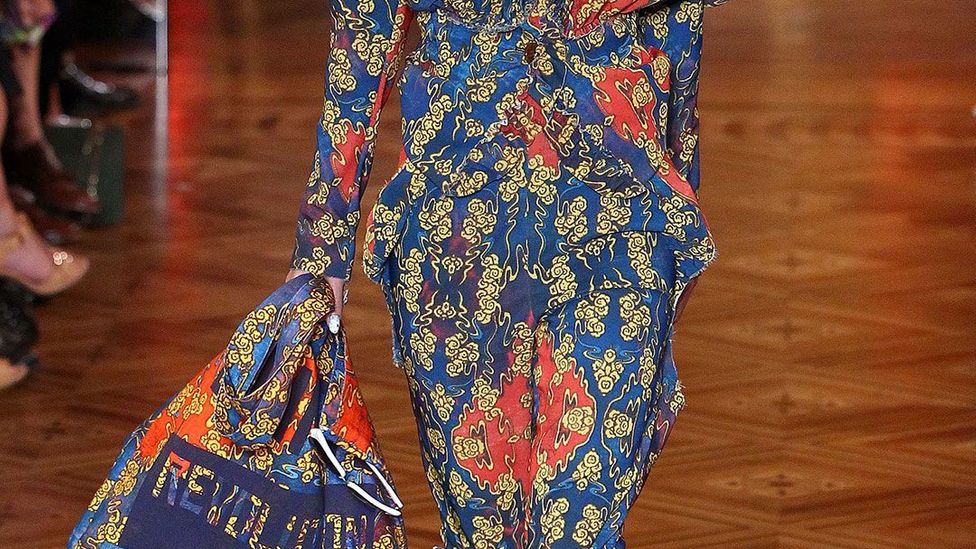 Vivienne Westwood and other designers have riffed on the suit to turn a symbol of communism into once of conspicuous consumption (Credit: Yaghobzadeh Rafael/Sipa/Rex)

In whatever ways the Mao suit has been appropriated it is, inadvertently, a soft power triumph for the authoritarian Chinese Communist Party abroad and a source of national pride at home. And that is something that has not gone unrecognised.

Top Communist Party members today have returned to Western suits, worn with ties and topped with slick, shoe-polish black hair. Meanwhile, president Xi Jinping is a fan of the humble windbreaker, making it his signature. According to The New Yorker this “major sartorial decision” has connotations of wholesome thrift, crucial to the anti-corruption campaign that has defined Xi’s leadership. 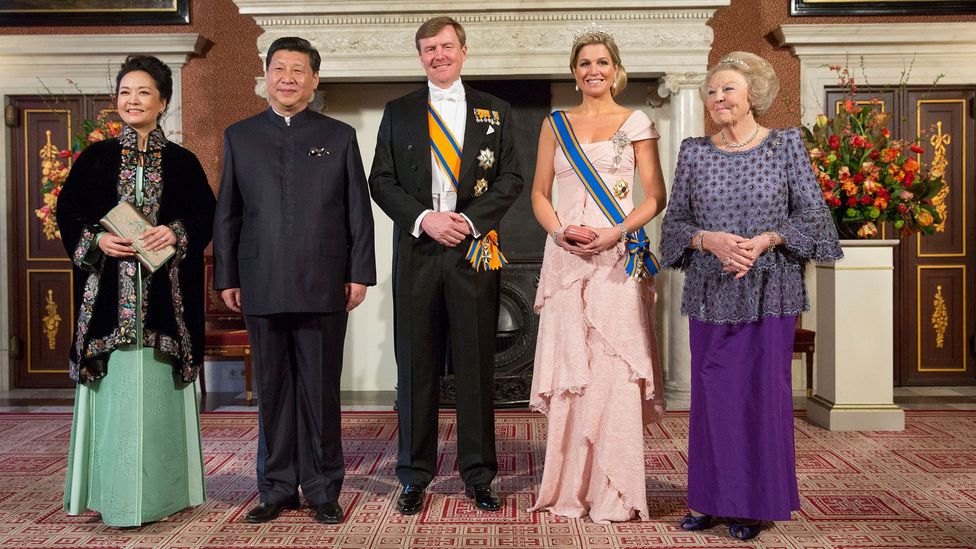 When Xi attended a dinner last year hosted by the Dutch royal family, however, he wore an elegant dark blue Mao suit, causing the state-run China Daily to gush: “Zhongshan suits make comeback”. The choice, the newspaper wrote, displayed the leader’s “confidence in Chinese culture”. This September, during a major military parade, Xi stepped out in a black Mao suit. It was to be taken as a sign, says Evans, of “national authority, national pride and national ritual”.

Whether Western fashion designers will continue to be inspired by the Mao suit remains to be seen. But in China, a country that that has yet to officially condemn Mao – whose Communist Party in still in power – the Mao suit isn’t going anywhere soon.