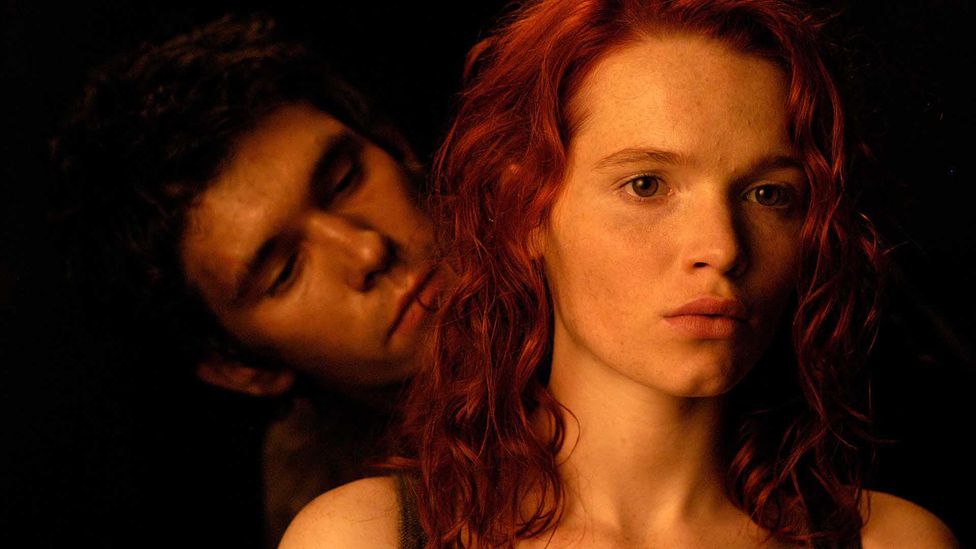 By Clarissa Sebag Montefiore 13th October 2015
Scent of Mystery was a 1960 film accompanied by scents pumped into the cinema. It was a gimmick that failed, but it’s being revived, writes Clarissa Sebag-Montefiore.
I

In 1960, 12-year-old Bruce Kimmel visited the movies at the Ritz Theatre on Wilshire Boulevard in Los Angeles. The curtains parted to reveal a butterfly beating its wings through the air before landing on a peach tree. As it did the sweet smell of peaches wafted through the cinema.

“I was totally smitten,” remembers Kimmel, now 67, of the film Scent of Mystery. “It was intoxicating.”

Scent of Mystery promised the advent of a new frontier: the age of Smell-O-Vision. Adverts ran: “First they moved (1895)! Then they talked (1927)! Now they smell!” 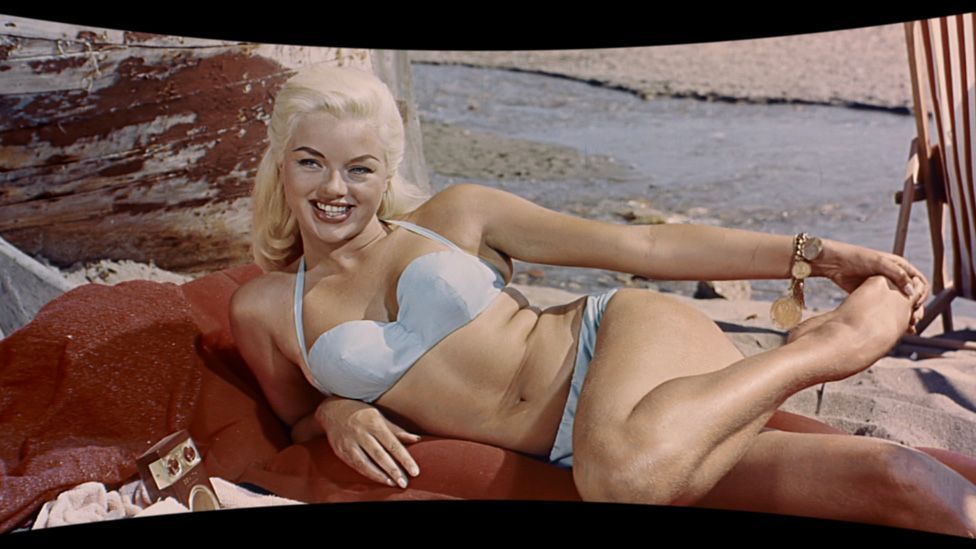 Scent of Mystery aimed to provide a sexy experience for the senses, including piped-in seaside smells (Credit: Redwind Productions)

The light-hearted thriller takes place in Spain. A photographer on vacation uncovers a murder plot; he then embarks on a chase to save the target, an enigmatic mystery woman (Elizabeth Taylor). She is identifiable until the end only via her distinctive perfume; her nemesis, meanwhile, reeks of tobacco from his smoking pipe.

Some aromas were delivered with a delay – others made people nauseas

Thirty scents, including baked bread and wine, were pumped directly to seats via osmologist Hans Laube’s invention, the ‘smell brain’. Hollywood producer Michael Todd Jr, ever the showman, proclaimed: “I hope it’s the kind of picture they call a scentsation!”

But the film flopped; the technology was not sophisticated enough to prop up an already flimsy plot. Some aromas were delivered with a delay; others made people nauseas; and the smell brain proved distracting, hissing loudly. Plans to introduce Smell-O-Vision in other cinemas were scrapped and an odour-less Scent of Mystery was re-released under the title Holiday in Spain. Smell-O-Vision was dead. 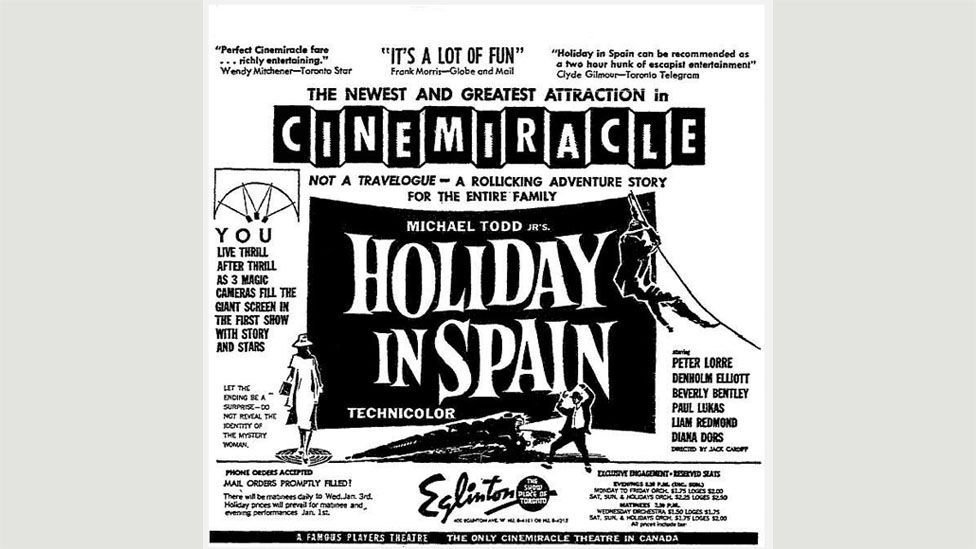 After audiences dismissed the Smell-O-Vision of Scent of Mystery as a gimmick it was re-released in an odourless version called Holiday in Spain (Credit: Redwind Productions)

Not now. This month, over half a century since its first release, Scent of Mystery will be screened in Bradford, England, and then Denmark, as it was originally intended – with scents floating through the cinema. “I want this to be a way to bring to people’s attention the potential of smell,” says Sydney-based producer and writer Tammy Burnstock. “It’s an opportunity to revive an interest in scented cinema.”

“The movie was literally buried in vaults – this is an interesting moment in cinema history that was repressed and now it’s out there,” notes the film’s restorer David Strohmaier, who, like everyone else working on the project is a volunteer. “We’re doing a retro thing. We’re doing it for fun, not to make money. It’s a tribute to old movies.”

Burnstock first became fascinated with Scent of Mystery after interviewing the movie’s director Jack Cardiff at film school in the 1980s; it failed, he insisted then, because most of the scents smelled like “cheap cologne”.

To avoid this, the new screening prioritises authentic aromas. The number of scents have been almost halved from the original with the integral “scent of mystery” (worn by Taylor’s character) created by Italian perfumer Antonio Gardoni. Some are obvious: the smell of orange grove or talcum powder, for example. Others are base notes used to create a particular atmosphere similar to the way a soundtrack works.

These include smells for a scene that takes place in the Spanish running of the bulls (animal sweat, fear, and dust), an ancient mosque, and ocean breeze. The latter is not the up close briny tang of fish and seaweed but, in cinema terms, more of a “wide shot”: the fainter scent of salty sea air.

Smell on screen is not new. Experiments over the last century have included spraying perfume from theatre ceilings or scratch-and-sniff cards with prompts on screen. In 1959 the device AromaRama, with scents dispersed through the air conditioning system, was introduced for the travellogue Behind the Great Wall, just weeks before Smell-O-Vision was released.

Scent of Mystery was, however, written specifically to be accompanied by smells. Scent gags include a cab driver taking a sip of coffee. The audience smells intoxicating brandy indicating a tipple on the job.

Over the last decade expertise has improved. Pundits say that emerging technologies now include “scented messages” on smartphones; and in 2013 Japanese researchers developed a “smelling screen”, with four fans able to release scents stored in tiny gel packets.

Yet smell remains largely ephemeral. Biophysicist Luca Turin, author of The Secret of Scent: Adventures in Perfume and the Science of Smell, warns: “You can’t lie with smells. If a movie depicts a fish market in Hong Kong, you better get that right. You can’t just stuff old fish [through the ventilation system] and hope for the best.”

Turin believes that Smell-O-Vision has never taken off because, unlike colour TV, smell has no primaries that can be mixed to make endless combinations. “You cannot create an enormous palate of smells the way you can with [just three primary] colours,” he explains. “And that is a fundamental technological problem.”

“It is extremely challenging and quite expensive,” admits Saskia Wilson-Brown, founder of LA’s Institute of Art and Olfaction and a collaborator on Scent of Mystery. “There is more technology now and people have a better understanding of how it can be used, but the truth is scent is entirely experimental.”

In order to reduce costs – and to attract cinemagoers searching for a more communal, hands-on experience – the new screening will emphasise audience participation. On each seat will be placed a fan infused with the ‘scent of mystery’ for viewers to wave when prompted, spray bottles will be released at specific moments and heavily scented actors will walk through the auditorium. Crucial is the order in which the scents are released: the smell of rose, for example, must be introduced before garlic.

They want to democratise smell, removing it from elitist marketers and perfumers

In the 1960s critics accused Smell-O-Vision of being a gimmick. That it remains a stunt today does not diminish its ambitions says Wilson-Brown. “There’s no shame in that. Let’s be honest, if this was a film about sexual abuse in rural Germany it wouldn’t work. [But] this is a cat and mouse film about a sexy woman wearing a sexy perfume and a man who is obsessed with her.”

The team, however, also hopes serious issues will be raised from the screening: they want to make steps towards democratising smell, removing it from elitist marketers and perfumers and bringing it back to the people. 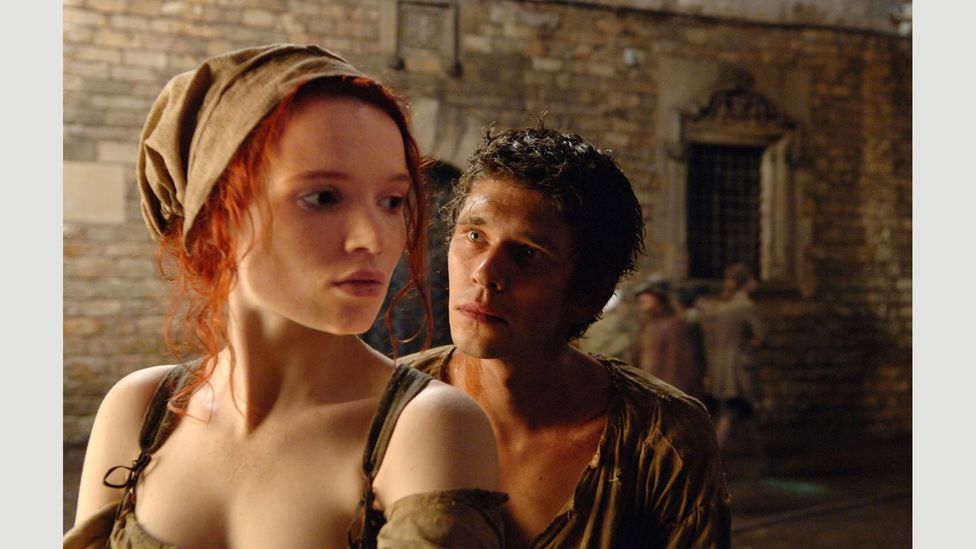 Perfume: The Story of a Murderer won praise from critics for evoking a sense of smell via images and editing and not through canned aromas (Credit: Dreamworks)

The art of scents is a “huge business” notes Burnstock, pointing to everything from luxury branded perfumes to household goods. “We are so easily manipulated with smell. There is a whole dimension that most people are not aware of and probably should be.”

Smell is underrated – particularly in the internet-obsessed visual age. Harnessing something so intangible for the arts, however, is a challenge. “Scent is a lot harder to control and so much more personal. If I was attacked in the lavender field, [the smell of lavender] would not be soothing, it would be traumatising,” notes Wilson-Brown.

Taking smell into the future means larger metaphysical questions too, she says, asking: “How do you make scent a part of the story without being gimmicky? It’s a question of semantics and creating a common language and common meaning, which is devilishly hard.”

For now, do not expect your local Imax to start emitting the smell of fresh daisies or cowpats from the screen: mass-market penetration remains a long way off. The screening of Scent of Mystery is about something more specific and boutique: giving due respect to what was once – and remains today – a bold idea, and opening up dialogue.

As Turin notes, “you have to trust people’s imaginations – it’s not all about plumbing. It’s about adding a poetic touch.”