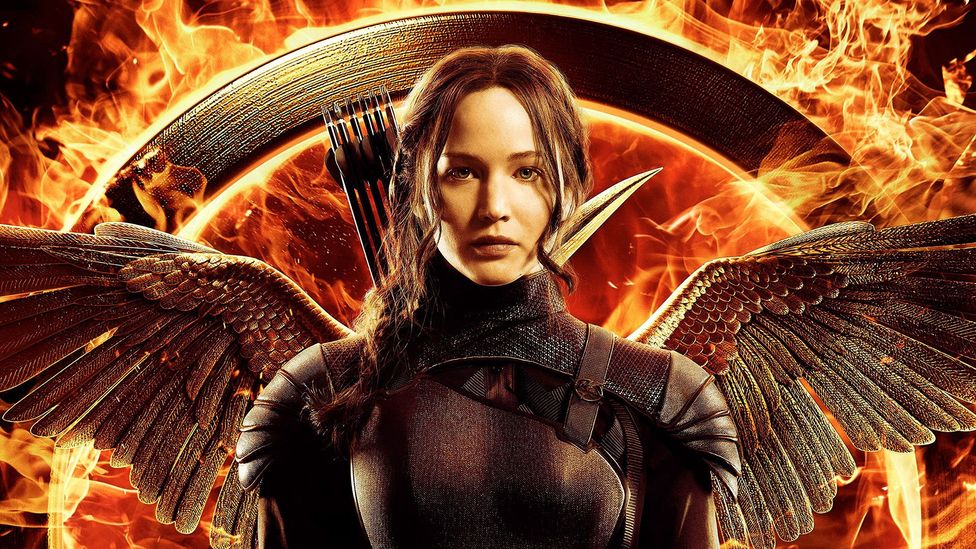 By Natalie Haynes 24th November 2015
With the final instalment of The Hunger Games, antiquities expert Natalie Haynes looks at the true history of gladiators – including the women who took up the sword.
A

As the final part of The Hunger Games juggernaut crashes into cinemas, with its depiction of a dystopian society that celebrates televised fights to the death in an arena, the spectre of gladiatorial combat is raised again. But are our commonly held ideas about gladiators accurate? The idea of formal, hand-to-hand fighting is one which has existed in many cultures across the world and throughout history: as a coming-of-age ritual, for example. However, this specific type of often-lethal violence, conducted for the pleasure of an audience, is something which we rightly associate with Ancient Rome.

Yet the Romans themselves weren’t sure where the idea of gladiatorial battles originated. Some attributed it to the earlier Etruscans, others thought it had been imported from Campania. They did agree, in large part, that it was not a Roman invention; the Romans were great cultural magpies, always happy to swipe ideas from their neighbours. But Rome’s very foundation myth was predicated on the idea of a one-on-one fight to the death: Romulus and Remus fought over where to build their city, and Romulus killed his brother. 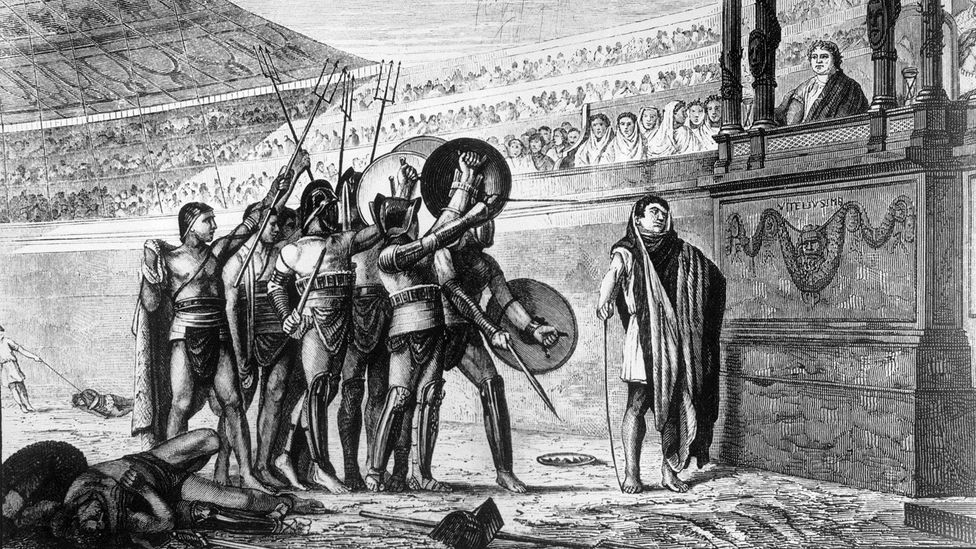 Gladiatorial combat became part of the fabric of Roman society, an example of munera (gifts, or spectacles, like chariot-racing) which were paid for by wealthy men trying to curry favour with ordinary citizens. It is a pity that the satirist Juvenal’s pithy epigram about the Roman plebs is so rarely quoted in its entirety: “Those who once bestowed military power, political power, legions, everything; now they limit themselves and pray for just two things: bread and circuses.”

It is the first of those final words, panem et circenses, which gave The Hunger Games’ author, Suzanne Collins, the name of her dystopian country. In Panem, young people are pitted against one another as a punishment for an earlier rebellion, and in order to try and win food for their people. But it would be anachronistic to suggest that the Romans saw gladiatorial combat in such simplistic terms: firstly, most gladiators were slaves, and so little more than objects in the eyes of their owners. And secondly, while we may focus on the obvious perils of fighting to the death, gladiators were no worse off than, say, slaves who were sent to quarries or mines. In fact, gladiators were probably better off, because they took more time to train, so were worth keeping alive for longer.

There were many different kinds of gladiator: a Retiarius fought with a net and a trident, a Samnite carried a short sword and shield, a Murmillo fought with a longer sword, a shield, and a helmet with a fish on the crest, and there were dozens more types. The appeal of the bouts lay, at least in part, in seeing how the differently armed men fought one another. And as if that wasn’t enough variety, there were also different types of bout. Sometimes gladiators fought one another, sometimes they fought wild beasts in venationes: wild animal hunts. Occasionally, an arena would be filled with water and a miniature sea-battle would be conducted.

Indeed, it is from a naumachia (the Greek word for a sea battle) that we have acquired one of our most persistent myths about gladiators: that they entered the ring and declared to the emperor, “Morituri te salutant”: “Those about to die salute you”. The story comes from Suetonius’ biography of the Emperor Claudius. The emperor was addressed with the famous phrase by the naumacharii, or sea-battlers. He was so surprised by their declaration that he replied, “Aut non”: “Or not”. The men then claimed the emperor had pardoned them, and they had no need to fight. Only by promises and threats, according to Suetonius, did Claudius persuade them to fight. It seems reasonable to suggest that it was not, therefore, a commonly-used phrase, or why would Claudius have replied at all, let alone with something that created more trouble?

6,000 men were crucified along the road between Rome and Capua

But gladiators had caused difficulties for those in power before. In 73 BCE the most famous gladiator who ever lived, Spartacus, took his fighting skills outside the arena (the English word comes from the Latin for sand, harena). Spartacus was – according to the historian Appian – a Thracian by birth, and had served as a soldier under the Romans. His military career must have taken a bad turn, because he found himself imprisoned, enslaved and eventually trained as a gladiator in Capua, in Southern Italy. 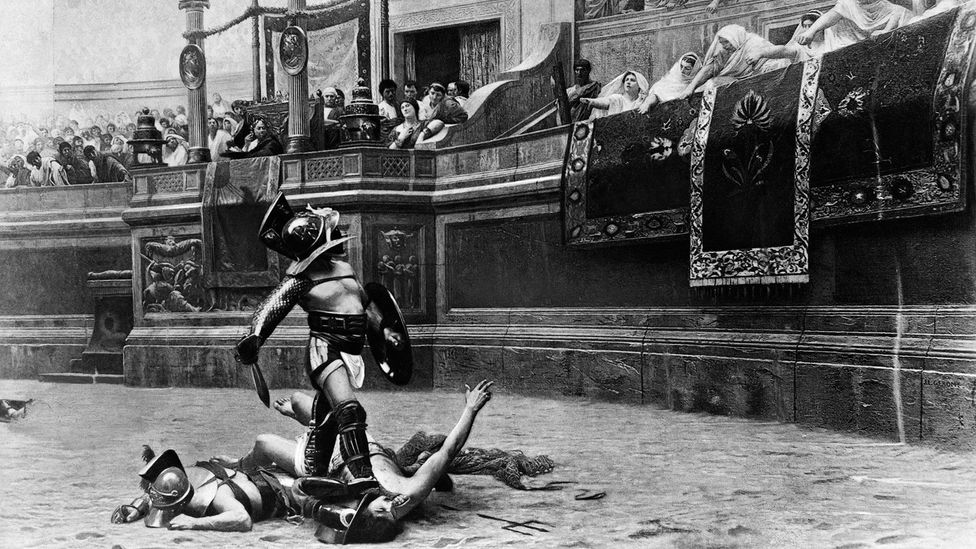 Spartacus persuaded 70 of his comrades to break out of the training school: they ran away and made camp on Mount Vesuvius. There they were joined by other slaves and some free men and together, they took on the Roman soldiers who came after them. They were astonishingly successful, almost capturing Varinius, an important Roman magistrate. This only added to Spartacus’ appeal, and he soon found himself leading about 70,000 men. Spartacus remained at large for three years, and the Romans were appalled to discover that their finest troops were being beaten by a bunch of slaves and paupers. It took a huge effort to conquer his ragtag army, and the mass crucifixions which followed (some 6,000 men were crucified along the road between Rome and Capua) were intended as a lesson to other putative rebels.

Female gladiators were extremely rare, but they did exist

Gladiators often maintained a certain glamour, especially over some sections of their audience. Juvenal has plenty to say on the subject in Satire VI, where he discusses the passion Eppia – a senator’s wife – has developed for a gladiator, Sergius. Juvenal lists the helmet-scarred Sergius’ many injuries (including a weeping eye, and an ulcerated nose). But because Sergius is a gladiator, Eppia finds him irresistible. It is from Juvenal too that we find an extremely ungenerous description of a woman fighting as a gladiator: female gladiators were extremely rare, but they did exist.

It is from Juvenal too that we find an extremely ungenerous description of a woman fighting as a gladiator: female gladiators – or gladiatrices – were rare, and were marketed as a novelty attraction, but they did exist. There was clearly an erotic edge to the image of women fighting in the ring – the natural descendants of the quasi-mythical Amazons – not least because female gladiators fought topless. There is a marble relief in the British Museum that was found in Halicarnassus, depicting two women – the names Achillia, a feminised version of Achilles, and Amazon are inscribed beneath them – facing one another. Each has a sword and a shield, greaves and arm-protectors. Their pose is athletic and impressive. But for Juvenal, the eroticism of a fighting woman is laughable: he makes scornful reference to a gladiatrix’s neck faltering under the weight of her helmet, and the chunky unattractiveness of her armoured legs.

If male gladiators were a symbol of what martial strength should be – stripped-down, man against man – then female gladiators were a subversion of that ideal. The emperor Domitian is said to have pitted gladiatrices against dwarfs in the arena. The image was surely meant to evoke a deviation, not just from the norms of gladiatorial combat but also from the norms of Roman womanhood: women were viewed as wives, and, especially, as mothers: the sight of women fighting child-sized people was intended to be shocking. Nero presented whole families in the games – the historian Cassius Dio mentions Ethiopian men, women and children in the arena together – and this too must have been intended to shock an audience accustomed to the traditional Roman ideal of the family. 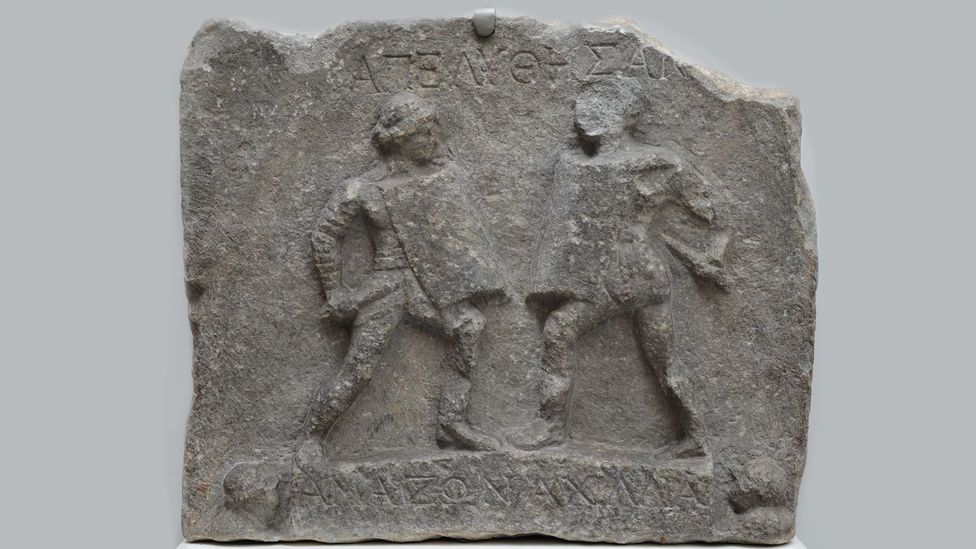 This marble relief dating to the 1st or 2nd Century AD from Turkey, then part of the Roman Empire, shows female gladiators (Credit: Carole Raddato/Flickr/CC BY-SA 2.0)

Laws were passed against Romans of senatorial class fighting in the ring, men and women alike. Indeed, these edicts were passed so often, it’s tempting to believe they had little effect: in 11 CE, then again in 19 CE, and so on. But how could you keep senators out of the arena when the emperor was fighting there himself? Or when he was compelling the senatorial class (some willingly, others less so, according to Dio) to fight there too?

The film Gladiator does, however, overlook what must be Commodus’ most notorious moment in the ring

The emperor Commodus, depicted with scenery-chewing relish by Joaquin Phoenix in Ridley Scott’s Gladiator (2000), did fight as a gladiator himself: Roman sources are always shocked by such low-status behaviour from their emperors. The film does, however, overlook what must be Commodus’ most notorious moment in the ring. The emperor decapitated an ostrich and carried the disembodied head over to the senatorial seats, brandishing it at his senators as a threat (that he could behead them as easily as he had beheaded the ostrich). 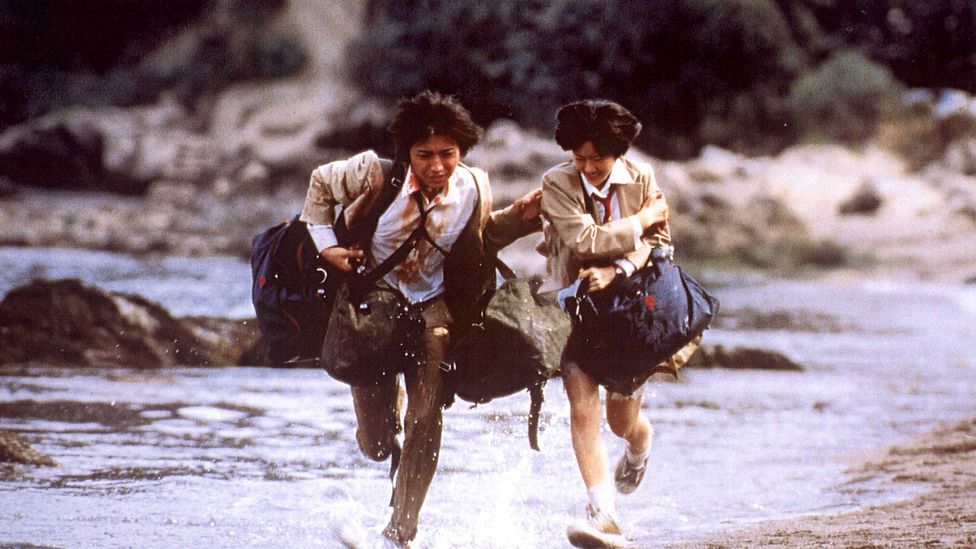 The idea of Gladiators has echoed down through popular culture, inspiring Battle Royale and The Hunger Games (Credit: Moviestore collection Ltd/Alamy Stock Photo)

Gladiators have also travelled successfully through time: in Star Trek, when Captain Kirk finds himself on an earth-like planet where Rome never fell (in Season 2’s Bread and Circuses), gladiatorial combat is still part of day-to-day life, and televised for the entertainment of the masses. But gladiators’ most resonant 21st Century incarnation is surely in The Hunger Games, and their cultural predecessor, Battle Royale, in which adults pit young people against one another to the death. The Japanese film is clear: adults fear the young, and this is a way of keeping them in check. As their former teacher and architect of their mass deaths explains, “Life is a game.”

For the two students who survive the battle, which is noteworthy for its high death toll and inventive methods of slaughter, there is no chance to be a folk heroine, like The Hunger Games’ Katniss Everdeen. Katniss volunteers to fight in place of her little sister; her gladiatorial career has a romantic appeal. The moral of the story is surely that by trying to quell an old rebellion, the ruling Capitol has created the perfect circumstances to foment a new one. But in Battle Royale, the successful gladiator is not the one who can command an army, it is the one who can disappear back into society, unnoticed.