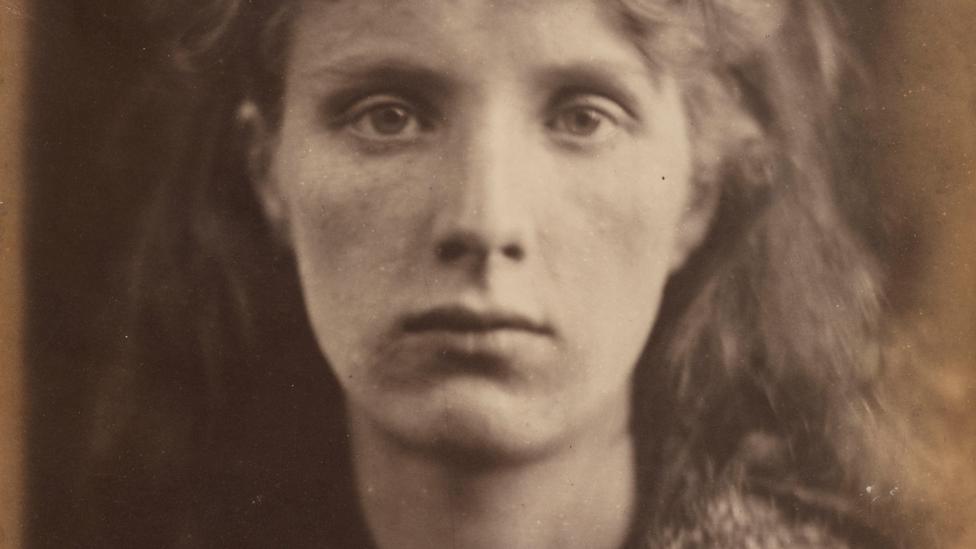 By Amanda Ruggeri 12th January 2016
Julia Margaret Cameron’s photographs were smudged, smeared, out of focus – and triumphs of artistic expression 150 years ahead of their time.
J

Just six months after she was given her very first camera, Julia Margaret Cameron applied to join the Photographic Society of London (now the Royal Photographic Society). For a 48-year-old woman in the Victorian era, a time when photography was both brand-new and completely dominated by men, this showed serious chutzpah.

Overcoming the less than warm welcome she received required more confidence still. From the start, Cameron’s work was lambasted in the press. And the biggest cause of criticism was the thing that, ironically, would turn out to be the hallmark of her style and her enduring fame: her mistakes. 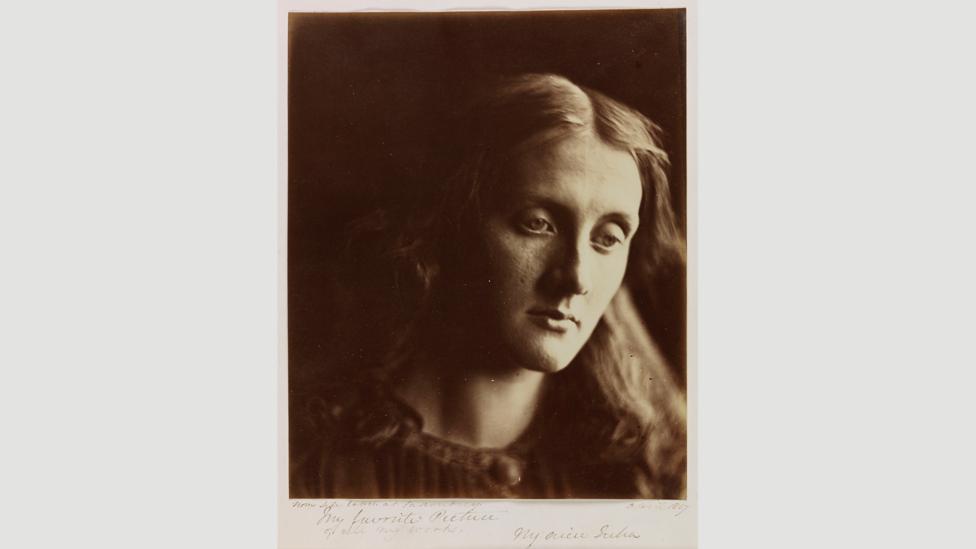 “She was immediately controversial,” says Marta Weiss, curator of the Julia Margaret Cameron exhibition on show at the Victoria & Albert Museum until 21 February. (Another exhibit marking the 200th anniversary of Cameron’s birth, Julia Margaret Cameron: Influence and Intimacy, runs until 31 March at London’s Science Museum).

Her photographic contemporaries criticised her work for being ‘slovenly’ – Marta Weiss

“Her photographic contemporaries criticised her work for being out of focus – which she says she did deliberately – for being ‘slovenly’, as they put it. For leaving flaws, like splotches and swirls you get from the uneven application of chemicals, or smearing things when the plate was still wet. Those kinds of flaws are things that the other photographers would have discarded as mistakes. She seemed to either accept, at the very least, or embrace them.”

The art of accident

At the time, many saw photography as a science rather than an art. Cameron’s peers had correspondingly mechanical tendencies: their goal was the accurate, precise rendering of a subject – none of this artsy, emotional expression.

But Cameron, who used the extremely messy and difficult-to-master wet collodion process – which involves coating glass with an even layer of collodion, sensitising it with a bath of silver nitrate, and exposing and developing the plate while it’s still wet – wasn’t nearly as fussed about precision.

As The Photographic News snorted, “What in the name of all the nitrate of silver that ever turned white into black have these pictures in common with good photography? Smudged, torn, dirty, undefined, and in some cases almost unreadable, there is hardly one of them that ought not to have been washed off the plate as soon as its image had appeared.” 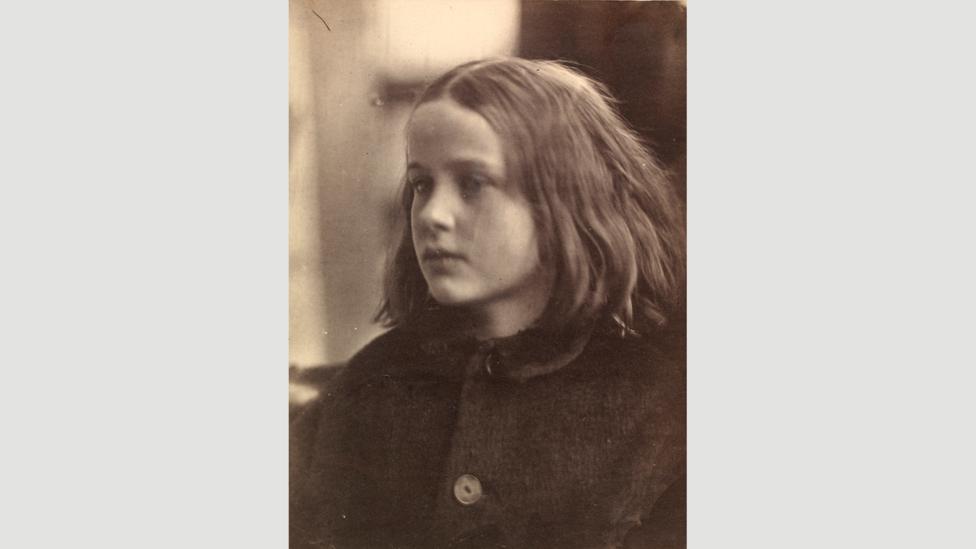 Cameron, who took this photograph, Annie, within a month of receiving her camera, immediately dubbed it her “first success” (Credit: Victoria and Albert Museum, London)

One of the major ‘flaws’ of Cameron’s work was her blurred focus. It’s not clear if this came about deliberately or not. After all, her first lens and camera had a short focal length and a fixed aperture that made it impossible to get everything in sharp focus. Making it more difficult was the fact that, because exposures at the time could be some 10 minutes long, any movement on the part of her models – who weren’t professional and were unused to such work – would result in blurred pictures. Cameron herself said that her first successes in taking photographs with the kind of focus she wanted, like Annie, were “a fluke”.

A mistake became an act of rebellion

But not wishing to create the impression that this was all a happy accident, Cameron added immediately: “That is to say when focussing and coming to something which to my eye was very beautiful I stopped there, instead of screwing on the Lens to a more definite focus which all other Photographers prefer.” A mistake became an act of rebellion against the status quo. 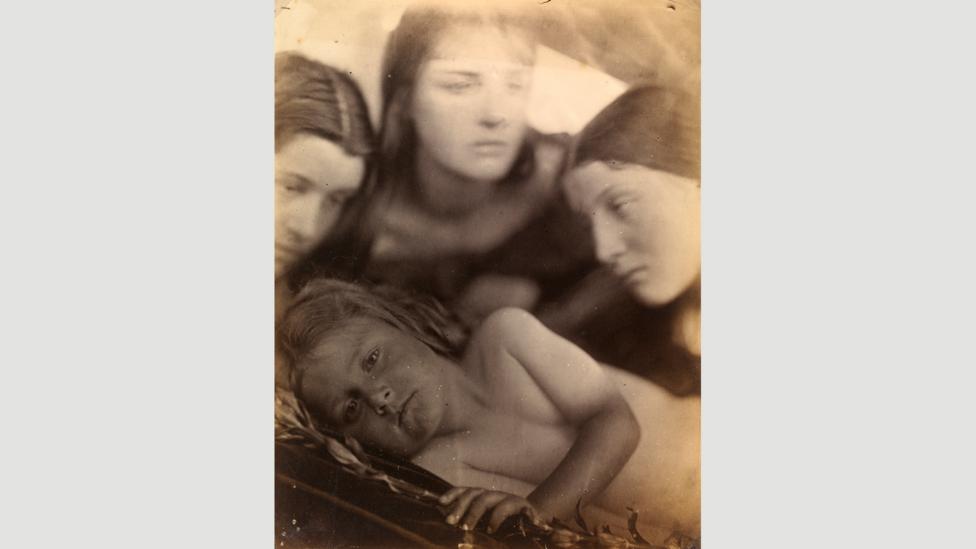 Hosanna, photographed in 1865, shows Cameron’s propensity to focus on only one part of the image – if any (Credit: Victoria and Albert Museum, London)

It also became an element that made Cameron’s photographs not only different – but helped raise photography to an art form. At the International Exhibition of 1862, there even were debates over whether photographs should be shown with the machines, or with the painting and sculpture. (In the end, unable to decide, the organisers gave photography its own section).

Cameron had no doubts where her pictures, at least, belonged. “My aspirations are to ennoble Photography and to secure for it the character and uses of High Art, by combining the real & ideal & sacrificing nothing of Truth by all possible devotion to poetry and beauty,” she wrote to the astronomer Sir John Herschel, her friend and mentor, in 1864. 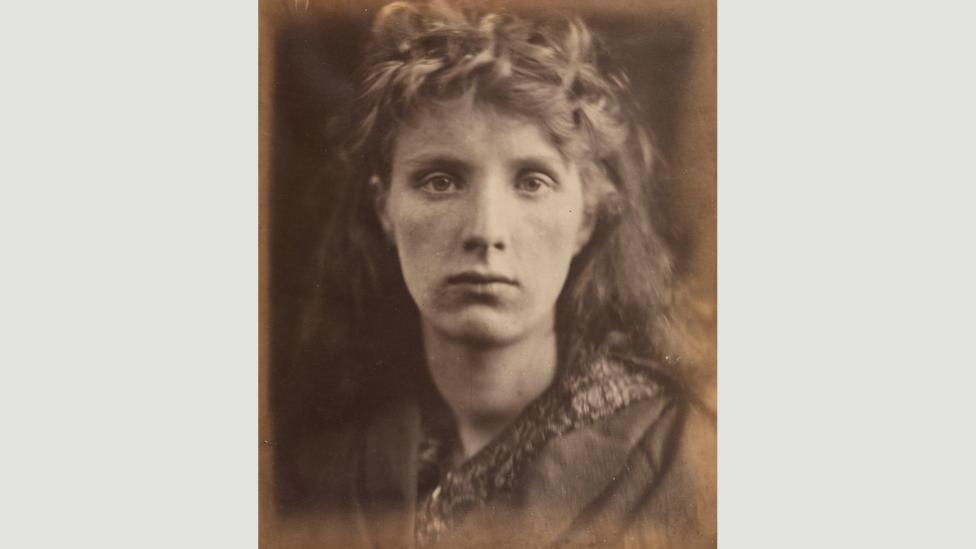 Poetry, beauty, a mix of the real and ideal: what could achieve those aims better than a soft focus, dramatic lighting and the subjects’ emotive expressions? Today, looking at her portraits feels almost like communing with spirits. Take the Mountain Nymph, shot in July 1866: with the direct gaze, high contrast and hazy atmosphere, the portrait looks dreamy and ethereal, like a phantom appearing out of the past.

Given Cameron’s devotion to photography as an art, it’s unsurprising that she was inspired by other artists, too, particularly Renaissance and Baroque painters. Or that, even while most photography critics eviscerated her, those in the art world celebrated her work and her aims. Many of her photographs incorporate familiar Renaissance elements like heavy drapery, triangular compositions and diagonal lighting. Her treatment of Sir John Herschel – an important man made real and intimate to the viewer with his weary, intense expression and unkempt hair – seems reminiscent of portraits like Raphael’s Pope Julius II. 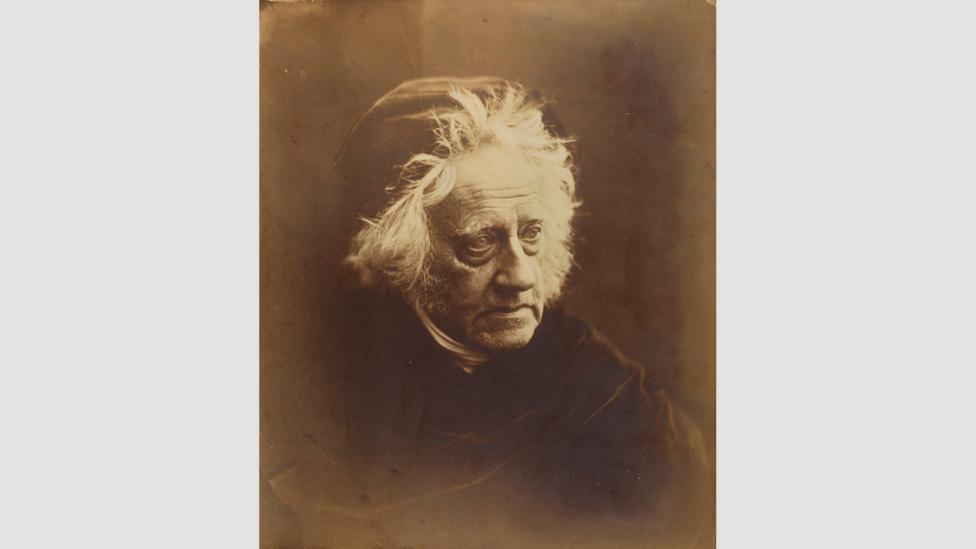 “If someone else were approaching it, it would probably be a formal portrait, quite stiff,” says Tim Clark, curator of the exhibition at London’s Science Museum. “Not here. She pushes the camera really up close and personal to dwell on his features.” Before photographing Herschel, Cameron even ordered him to go wash and tousle his hair, giving a halo of intelligence.

But it was the pre-Raphaelites who especially embraced Cameron. One of the things she shared with them was a propensity to stage tableaux: many of her photographs were of religious or literary scenes, drawn from the tales of King Arthur or Greek legends. She used props and costumes, and she was notorious for luring potential models to her studio; she even hired maids based not on their housekeeping skills, but on how they would look in her pictures. While this kind of staging now seems sentimental and Victorian, it would also, of course, become thoroughly postmodern. In some ways, you can draw a line from Cameron right up to Cindy Sherman. 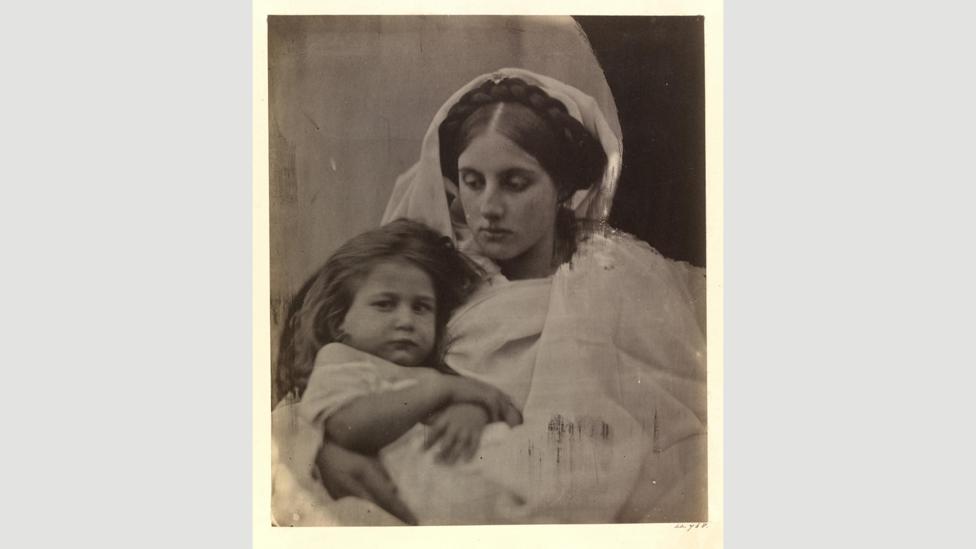 Cameron completely scratched off the emulsion in the corner of her 1864 photograph La Madonna Vigilante (Credit: Victoria and Albert Museum, London)

No matter how staged the composition itself, there’s almost always a Cameron ‘flaw’. Or was it a flaw at all? In La Madonna Vigilante, she has scratched the emulsion off the plate on the upper right of the picture. Perhaps there was something in the photograph she didn’t like. Or perhaps she did it for effect: to emphasise the halo around the Madonna’s head.

These ‘mistakes’ also allow the viewer into the studio with her. In a series she made of two children, entitled Paul and Virginia, each image gives us a different glimpse behind the scenes. One shows the disembodied hand of a helper holding a dark cloth. In another, the hand is gone, but Cameron evidently didn’t like the size of little Paul’s feet; she has scratched into them to make them smaller. 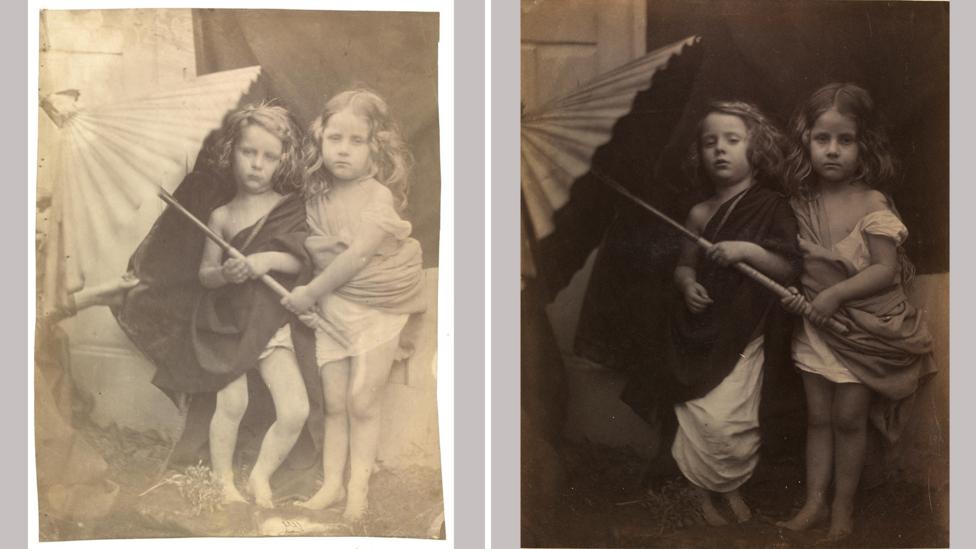 These two photographs of Paul and Virginia give viewers a glimpse into Cameron’s process (Credit: Victoria and Albert Museum, London)

This frank, open approach put Cameron far ahead of her time. “It’s not too much of a stretch of the imagination to imagine her in a postmodern vein, where she’s revealing the artist’s hand and the process of picture-making,” Clark says.

Still, would Cameron have preferred a more seamless execution? Are these tell-tale signs really, in fact, ‘mistakes’? It’s hard to know. What we do know is that there were plenty of photographs that she discarded – some of which are on display at the V&A. The rest were those that she wanted to be shown. That made her, as one of the kinder critics of her time wrote in 1866, “the first person who had the wit to see her mistakes were her successes.”

And that, in many ways, may be the true mark of genius – artistic or scientific. As Weiss says, “That’s how people make discoveries. You stumble upon something, and then it becomes deliberate.”