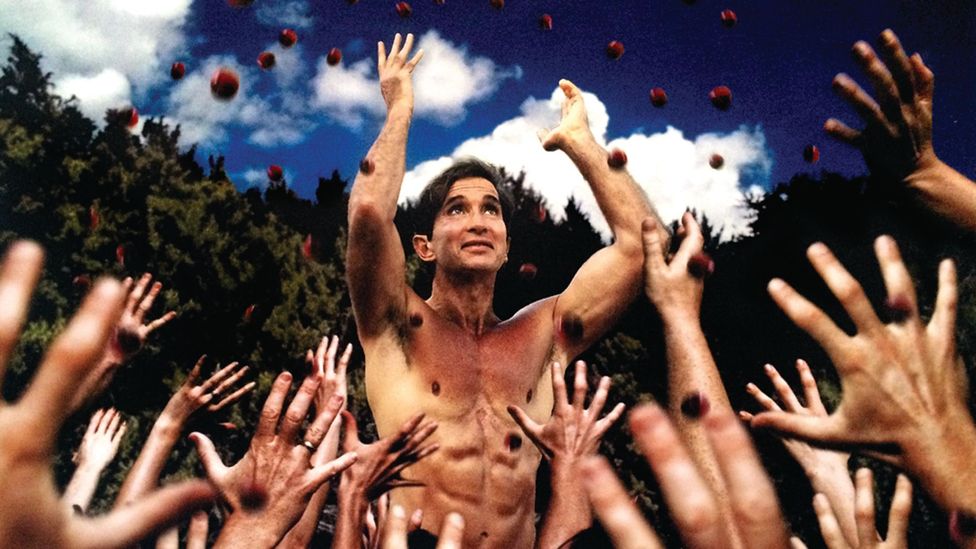 By Owen Gleiberman 28th January 2016
The film-maker Will Allen has used more than 20 years of footage he took as a member of an LA cult to make the documentary Holy Hell. Owen Gleiberman takes a look from the Sundance Film Festival.
T

There are many fascinating aspects to life inside a cult. But the spooky Sundance documentary Holy Hell understands that the ultimate fascination of any cult is its leader: the tricky and charismatic dictator who hides his true agenda behind a smokescreen of false wisdom and compassion. The most famous cult leaders – Charles Manson, Jim Jones – are so gripping in their malevolence that they seem to be pop culture villains; they act out evil on a grand scale. In Holy Hell, we’re given an unprecedented close-up look at what goes on in a smaller, quieter, but much more typical cult – in this case, a group of very pretty people in West Hollywood who came together in the 1980s to form an ‘enlightened’ community known as the Buddhafield. They did yoga, they went on weekend retreats, they blissed out on group hugs and spirit power. Mostly, though, they sat around and listened to their guru, a sinister oddball named Michel who presented himself as a living god. This should have been the first tipoff that he wasn’t one.

Will Allen, the director of Holy Hell, joined the Buddhafield in 1985, and since he was an aspiring filmmaker, he became the group’s designated video diarist, recording their activities on a camcorder and staging clever/silly little experimental home movies with them. In Holy Hell, Allen uses the wealth of footage he shot over 22 years to take the audience along on his slow immersion into the group. We see many clips of the cult members, but the one who’s always front and center is Michel. And that’s just where you want him, because he’s a captivating, twinkly-eyed charlatan you can’t stop studying, since it’s obvious – at least to the audience – that he isn’t what he seems. He speaks in a vague Continental accent, he leads meditation sessions in a Speedo bathing suit, and he’s a dancer and bodybuilder who exudes the puckish creepiness of an imp.

We see clips of Michel back from when he was a cheesy soap-opera actor, and though he remains handsome, as a guru he becomes a plastic-surgery addict who resembles Rudolf Nureyev on happy pills. He turns his face into a mask, and Holy Hell is a documentary suspense film in which we watch with bated breath as the mask is slowly pulled off.

Michel promises to take the group’s members to a state of ultimate enlightenment, which he calls “the knowing”. But what the audience knows is that there’s something deeply wrong with this picture of ‘spiritual’ seekers who all look like smiling hippie hunks and starlets out of a ‘70s Pepsi commercial. Michel’s real agenda has much in common with that of other cult leaders: sex, money, power. As the years go by, he becomes more overt in acting out his megalomania, breaking down any shred of resistance in his followers. The transcendence of the ego really is a cornerstone of some Eastern religions, but here it becomes an excuse for washing out the followers’ identities. Allen interviews many of the former cult members, who testify how enthralled they were by Michel. They would do anything for him; his demands for “service” reduced them to round-the-clock slaves. By the time the film reaches its most disturbing revelation, it hardly comes as a shock, yet when we see clips of Michel in his secret former identity as a stud in gay porn films, it is shocking, because we register how totally false his guru persona is.

It isn’t clear that Allen entirely gets this. Holy Hell has a flaw, and it’s that the movie buys into the idea that the Buddhafield was a mixture of the good and the bad. The dark side of Michel is presented as the flipside of his role as wise teacher and guide. But most of the former cult members don’t seem to realise that Michel was a con artist even when he wasn’t exploiting or abusing anyone. His ‘teachings’ never lifted anyone to a higher place; they were just the early stages of brainwashing. By the time Holy Hell reaches its ominous final scene, the scariest thing about it is that Allen has made a movie about how he fell into a cult and then liberated himself from it, but at the end he still seems the tiniest bit under its spell.