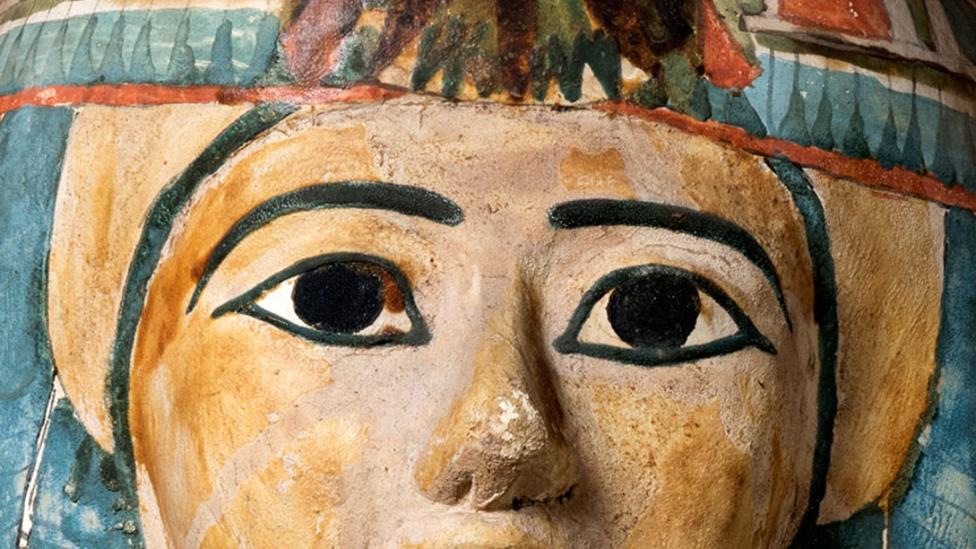 By Alastair Sooke 4th February 2016
Pop culture is steeped in images of smoky-eyed pharaohs and their queens. Were the ancient Egyptians insufferably vain – or are we simply projecting our own values onto them? Alastair Sooke investigates.
W

Walking around Beyond Beauty, the new exhibition organised by charitable foundation the Bulldog Trust in the neo-Gothic mansion of Two Temple Place in central London, you would be forgiven for thinking that the ancient Egyptians were insufferably vain.

Many of the 350 exhibits, drawn from the overlooked collections of Britain’s regional museums, consist of what we would call beauty products, of one sort or another.

There are dinky combs and handheld mirrors made of copper alloy or, more rarely, silver. There are siltstone palettes, carved to resemble animals, which were used for grinding minerals such as green malachite and kohl for eye makeup.

There are also pale calcite jars and vessels of assorted sizes, in which makeup, as well as unguents and perfumes, could be stored. Then there is a scrap of human hair that suggests the ancient Egyptians commonly wore hair extensions and wigs. 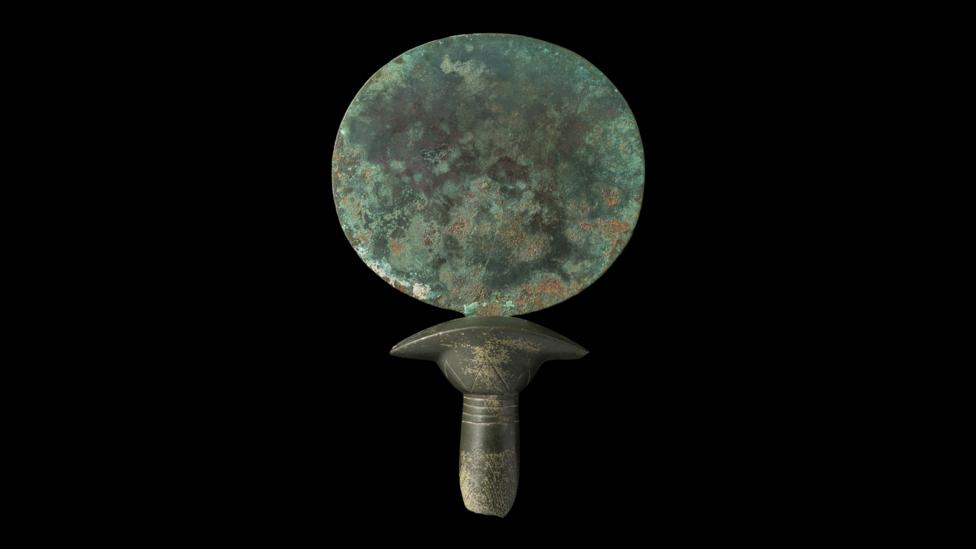 This copper alloy mirror from the 2nd Millennium BC has a handle made out of stone that looks like a column of papyrus (Credit: Courtesy Two Temple Place/Macclesfield Museum)

And, of course, there are lots of striking examples of Egyptian jewellery, including a string of beads, decorated with carnelian pendants in the shape of poppy heads, found in the grave of a small child wrapped in matting.

In short, ancient Egyptians of both sexes apparently went to great lengths to touch up their appearance.

Moreover, this was just as true in death as it was in life: witness the smooth, serene faces, with regular features and prominent eyes emphasised by dramatic black outlines, typically painted onto cartonnage mummy masks and wooden coffins.

Yet, for modern archaeologists, the ubiquity of beauty products in ancient Egypt offers a conundrum.

On the one hand, it is possible that ancient Egyptians were besotted with superficial appearance, much as we are today. Indeed, perhaps they even set the template for how we still perceive beauty.

But, on the other, there is a risk that we could project our own narcissistic values onto a fundamentally different culture. Is it possible that the significance of cosmetic artefacts in ancient Egypt went beyond the frivolous desire simply to look attractive?

This is what many archaeologists now believe. Take the common use of kohl eye makeup in ancient Egypt – the inspiration for smoky eye makeup today. Recent scientific research suggests that the toxic, lead-based mineral that formed its base would have had anti-bacterial properties when mixed with moisture from the eyes. 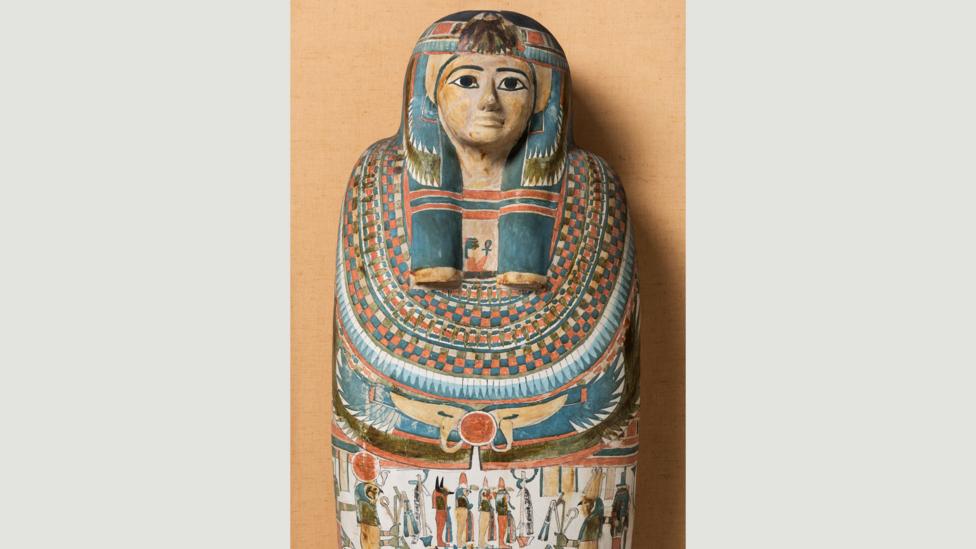 In addition, the heavy application of kohl around the eyes would have helped to reduce glare from the sun. In other words, there were simple, practical reasons why both men and women in ancient Egypt wished to wear eye makeup.

It’s the same with other ancient Egyptian ‘beauty products’. Wigs helped to reduce the risk of lice. Jewellery had powerful symbolic and religious significance.

But they may have had a protective function too. There is evidence that, during the New Kingdom, dancing girls and prostitutes used to tattoo their thighs with images of the dwarf deity Bes, who warded off evil, as a precaution against venereal disease.

“The more I try to understand what the Egyptians themselves understood as ‘beautiful’”, says Egyptologist Joyce Tyldesley, “the more confusing it becomes, because everything seems to have a double purpose. When it comes to ancient Egypt, I don’t know if ‘beauty’ is the right word to use.” 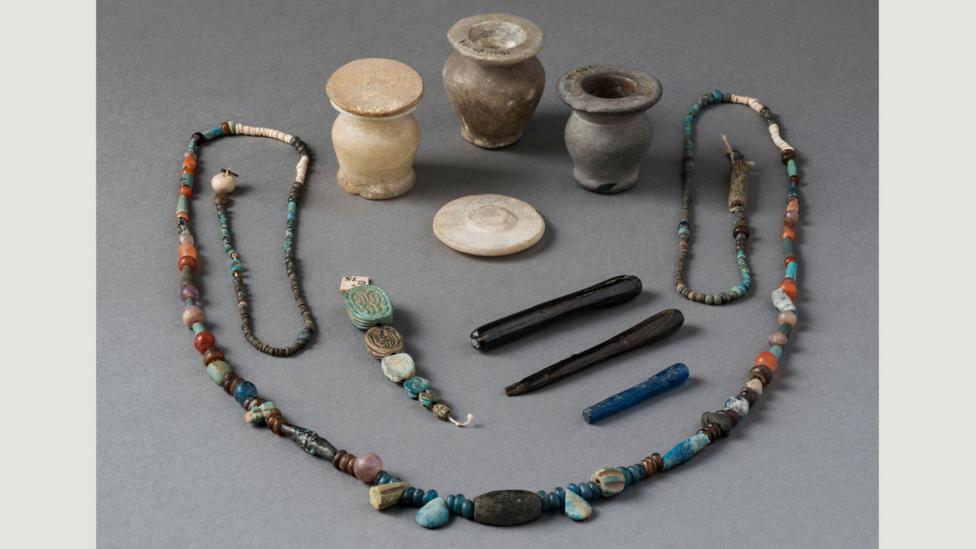 These cosmetic pots contained kohl, which the ancient Egyptians applied like eye-liner, perhaps to screen out the sun (Credit: Two Temple Place/Ipswich Museum)

To complicate matters further, there are eye-catching exceptions to the general rule whereby elite ancient Egyptians presented themselves in a stereotypically ‘beautiful’ fashion.

Consider the official portraiture of the Middle Kingdom pharaoh Senwosret III. Although his naked torso is athletic and youthful – idealised, in line with earlier royal portraits – his face is careworn and cracked with furrows. Moreover his ears, to modern viewers, appear comically large – hardly an attribute, you would think, of male beauty.

Yet, in ancient Egypt, the effect wouldn’t have been funny. “In the Old Kingdom, kings were god-kings,” explains Tyldesley, who is a senior lecturer at the University of Manchester. “But by the Middle Kingdom, kings [such as Senwosret] recognised that things could crumble and go wrong, which is why they look a bit worried.”

“The big ears are telling us that this king will listen to the people,” she adds. “It would be wrong to take his portrait literally and say he looked like this.”

Queen of the Nile

Why, then, do we continue to associate ancient Egypt with glamour and beauty? “We still find ancient Egyptian civilisation very seductive,” agrees Tyldesley, who believes that this is due to the afterlives of two famous Egyptian queens: Cleopatra and Nefertiti.

Ever since antiquity, following the Roman conquest of Egypt, Cleopatra has been known as a paragon of beauty. Meanwhile the discovery, in 1912, of the famous painted bust of Nefertiti, now in Berlin’s Egyptian Museum, turned a little-known wife of the pharaoh Akhenaten into a pin-up of the ancient world.

Yet, says Tyldesley, who has written a biography of Cleopatra and is researching a book on Nefertiti, there is irony to the fact that these two Egyptian queens now resonate as sex symbols.

Cleopatra had a big nose, a protruding chin, and wrinkles – Joyce Tyldesley

For one thing, explains Tyldesley, “Cleopatra has given us the idea that ancient Egyptian women were all beautiful, but we don’t actually know what she looked like.”

In her coinage, Tyldesley says, “Cleopatra had a big nose, a protruding chin, and wrinkles – not what most people would call beautiful. You could argue that she appeared on her coins like that on purpose, because she wanted to look stern, and not particularly feminine. But even Plutarch, who never met her either, said that her beauty was in her vivacity and her voice, and not in her appearance. Yet we have decided that she was beautiful and that she has to look like Elizabeth Taylor. I think that the idea of Cleopatra, rather than Cleopatra herself, has influenced us.” 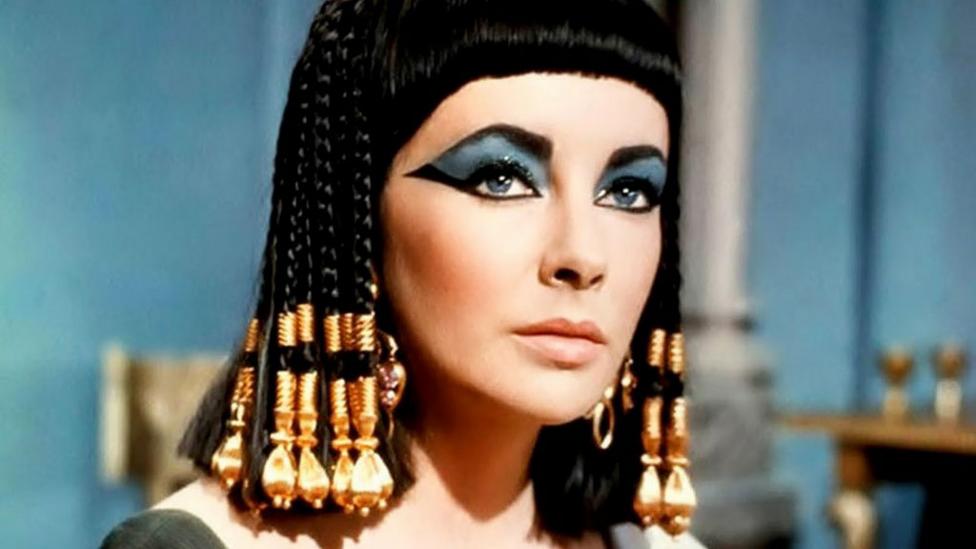 The notion of ancient Egyptians as glamorous comes largely from Cleopatra, whose wiles ensnared Caesar – Elizabeth Taylor did not discredit that idea (Credit: 20th Century Fox)

As for Nefertiti, Tyldesley points out that her bust is not typical of ancient Egyptian art: “It’s an unusual statue in that it’s got all the plaster on and it’s colourful – a lot of the artwork we have is more stereotyped and less personal-looking than that.”

Moreover, the moment when the bust was unveiled in Berlin – in 1923 – was crucial to its reception. ‘Egyptomania’ was in the air, following the discovery of the tomb of Tutankhamun the previous year, and Nefertiti’s angular, geometric appearance chimed with fashionable taste. “She’s very modern-looking, very Art Deco,” says Tyldesley. “So everybody seemed to like her. It’s hard to find anybody who didn’t think that Nefertiti was beautiful.” 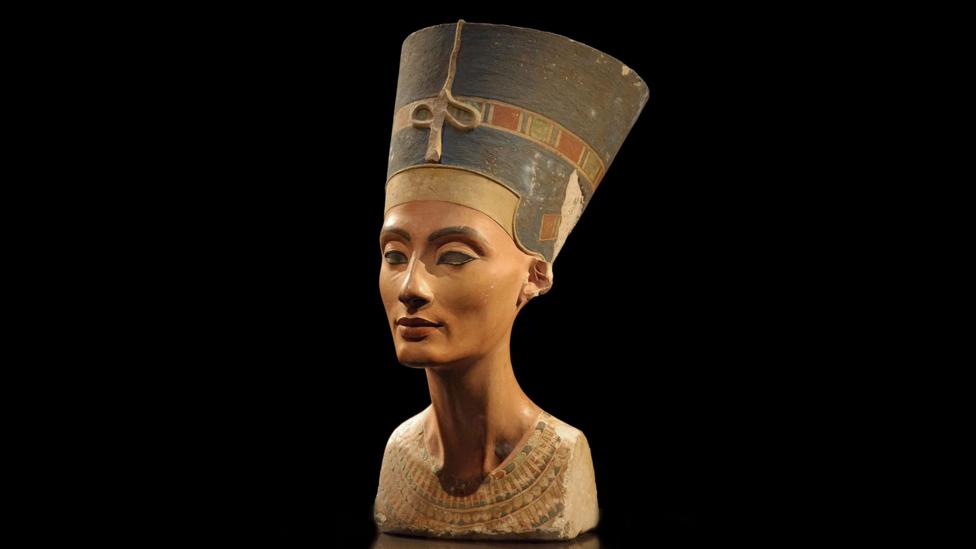 When this bust of Nefertiti was discovered in 1912, the queen instantly became a sex symbol of the ancient world (Credit: Philip Pikart/Wikipedia/CC BY-SA 3.0)

During the ’20s, the bust of Nefertiti also benefited from the power of the mass media to turn her into a star. “A hundred years earlier, without newspapers or the cinema, that wouldn’t have happened,” says Tyldesley. “She would have gone into a museum and nobody would have made the fuss they did.”

She pauses. “I wonder whether the fact that Nefertiti was put on display in Berlin as a major find actually influenced what we saw. After all, beauty, as we know, is in the eye of the beholder.”

Alastair Sooke is Art Critic of The Daily Telegraph