Loading
Film | Hollywood
The lasting legacy of The Good, the Bad and the Ugly
Share using EmailShare on TwitterShare on FacebookShare on Linkedin 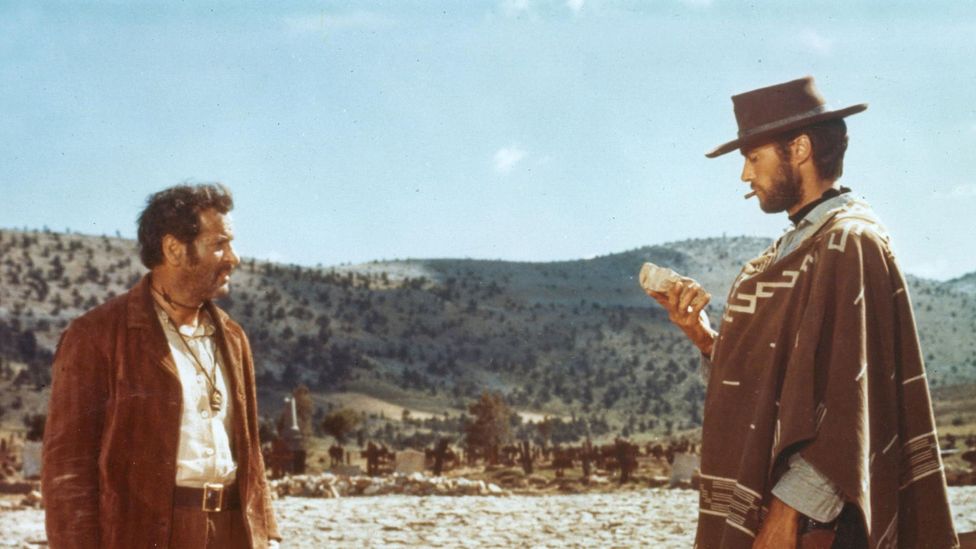 Three whiskered, weather-beaten men stand facing each other, alone in a huge cemetery. They exchange suspicious glances and remain almost perfectly still, not saying a word. The stare-off continues for two and a half minutes.

Not exactly the stuff of interesting cinema, is it?

Actually it's one of the most riveting and acclaimed feature film sequences of all time: the climactic showdown at the end of Sergio Leone's The Good, the Bad and the Ugly.

This year marks the 50th anniversary of the film’s original release. In the five decades that have followed, it has had a huge impact on cinema and popular culture.

The legacy of the legendary Italian filmmaker was etched in the spaghetti western, a sub-genre of films produced in the 1960s and ‘70s inspired by Hollywood cowboys-and-Indians pictures. They were made by risk-taking European directors working with much smaller budgets, and so the movement became defined by a gutsy spirit of innovation.

No spaghetti western is as famous, and few as highly regarded, as Leone’s 1966 epic about a trio of tough-as-nails vagabonds on the hunt for a missing fortune. His classic sun-baked amorality play has surfaced on countless ‘best of’ lists over the years; the groundbreaking storytelling techniques in the film have been used, taught, stolen and referenced by film-makers from all over the world.

The famous face-off between the three men , known as the ‘trio’ scene, is regarded as one of the best examples of editing in cinema history. The impact of this hyper-stylised moment goes to the heart of why The Good, The Bad and the Ugly resonates so strongly half a century since its initial release: it is not about what happens, but how it unfolds.

There are signs from the very start it will be a work of visual bravado. The film starts with a long, wide shot of a jagged, infertile valley and mountainside.

But it lasts for only a couple of seconds – Leone uses it as an opportunity for visual sleight of hand. A cowboy’s stubbly face suddenly swings into the frame, so close we can literally see up his nostrils. An extreme long-shot has therefore transformed into an extreme close-up, without the image cutting or moving.

It is an early flourish that – in the deceptively sophisticated way it rearranges composition – is both  elegantly simple and joltingly ostentatious. The vastness implied in this establishing shot sets the context, communicating a story that will play out in front of sprawling, treacherous backgrounds, then rapidly shifts to emphasise the film’s signature shot: a portrait image filmed unnaturally close to the subject. 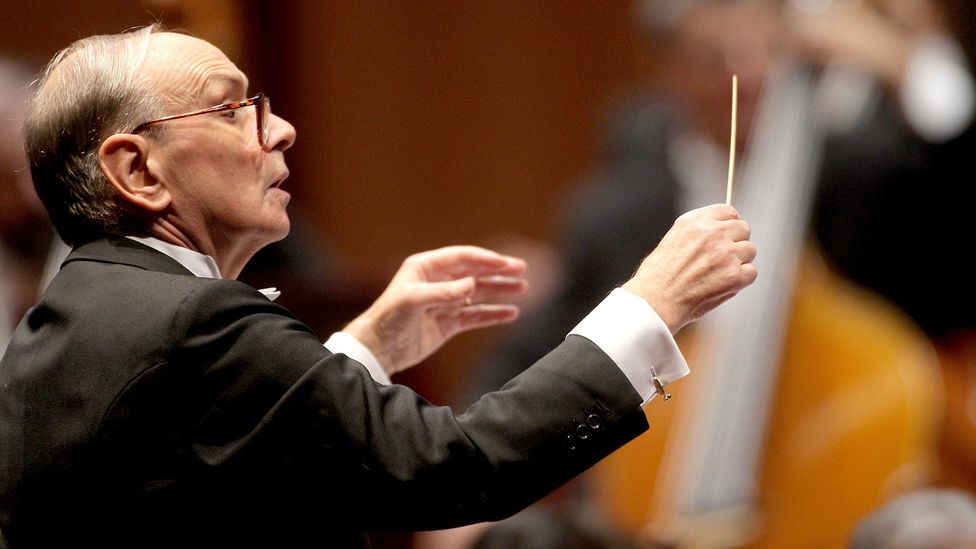 The film’s score, by legendary Italian composer Ennio Morricone, was inducted into the Grammy Hall of Fame (Credit: Getty Images)

As important to as the editing The score which accompanies the film is regarded as one of the best in cinema. Created by Italian maestro Ennio Morricone, the composition was inducted into the Grammy Hall of Fame in 2009. A book has been written about the instantly recognisable theme music, which ranks among cinema’s best known – up there with Jaws’s ominous two-note ostinato and the Imperial March from Star Wars.

But the crowning visual moment is the trio scene, a bravura cinematic moment in which the titular characters (played by Clint Eastwood, Lee Van Cleef and Eli Wallach) face each other down on an oval-shaped cement patch in a Civil War cemetery. To understand the importance of this scene, first it helps to know a bit about the basic technical elements of film-making.

The most fundamental principle of editing – known as cutting for continuity – is generally used to contract time. In this way the moment-by-moment minutiae of real life can be eradicated. A shot of a person beginning to walk up a flight of stairs, for example, cuts to that same person emerging at the top, the unexciting observation of them climbing removed from the drama.

The trio scene instead relishes in non-activity, essentially telling a story where there is none. The characters' wordless confrontation is bookended by a master shot depicting the bandits positioned in triangular arrangement, with graves and headstones in front and behind them.

The scene gets more frenetic and the shots shorter and tighter as Morricone’s score soars. The audience enters that rare and special space where we feel as if we are inside the characters’ minds, trembling along with them in fear and anticipation.

It is also one of those sequences – like Hitchcock’s shower scene in Psycho – that academics and die-hard fans have scrutinised in shot-by-shot detail, as if they were scientists dissecting an extra-terrestrial body in order to find its secrets. The energy of this rip-roaring feat of visual poetry feels chaotic but the structure of it is methodological, even mathematical.

The Good, the Bad and the Ugly’s effect can still be felt in films released today. No filmmaker has worn their appreciation of the film with as much rootin’-tootin’ heart-on-sleeve zeal as Quentin Tarantino, who describes it as the greatest achievement in the history of cinema. An avid believer in the dictum that great artists steal, Tarantino’s love of the film can be seen strewn throughout his work. In fact, for his recent mystery-western The Hateful Eight, Tarantino hired Morricone (who is now aged 87) to create the soundtrack.

The worldwide success of Good, the Bad and the Ugly made an international star of Clint Eastwood

Tarantino’s homages to The Good, the Bad and the Ugly make their way into the majority of his films in one form or another. Probably most conspicuous is the waiting-to-blink Mexican standoff at the conclusion of 1992’s heist drama Reservoir Dogs. The scene depicts three armed bandits (played by Lawrence Tierney, Harvey Keitel and Chris Penn) pointing guns at each other, waiting for each other to strike. It is a dead ringer – down to the triangular arrangement of the characters – for the roaring climax to Leone’s gritty masterpiece. 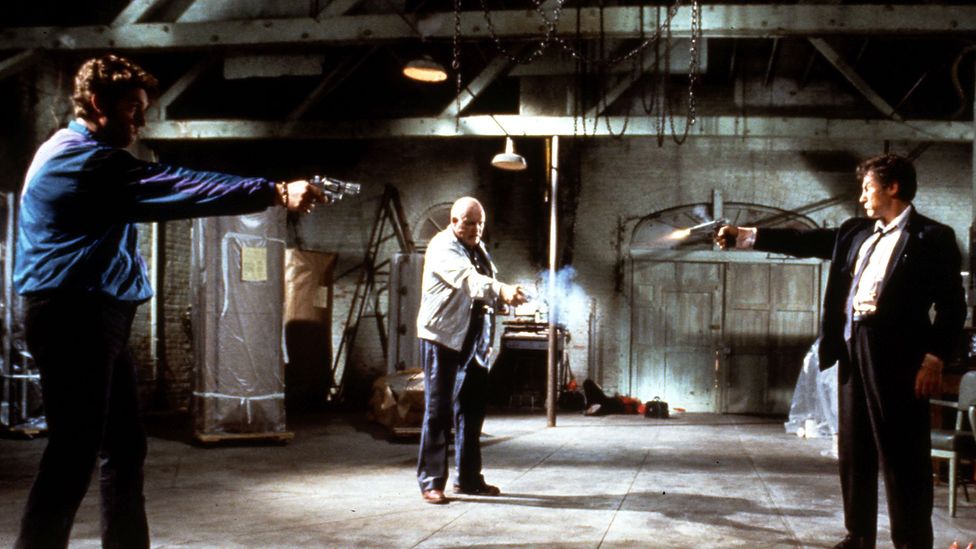 The film has directly inspired many other filmmakers, including Martin Scorsese, Robert Zemeckis, Sam Raimi and Robert Rodriguez. The worldwide success of Good, the Bad and the Ugly made an international star of Clint Eastwood, who began working with director Don Siegel two years later. This collaboration led to performances in classics such as Dirty Harry and Escape from Alcatraz.

It would be nice to say that after The Good, the Bad and the Ugly, every spaghetti western hit a similar stride or wowed audiences in comparable ways. But that was not the case – like most movements, or ‘waves’, titles in the genre vary substantially in quality.

But if any one film could crystallise the best parts of the spaghetti western – its fierce spirit of innovation, its, at times, pinpoint matching of atmospheric and psychological energy – this would be it. This moment was the shoot-em-up’s high-water mark, and is just as electrifying to watch now as ever.