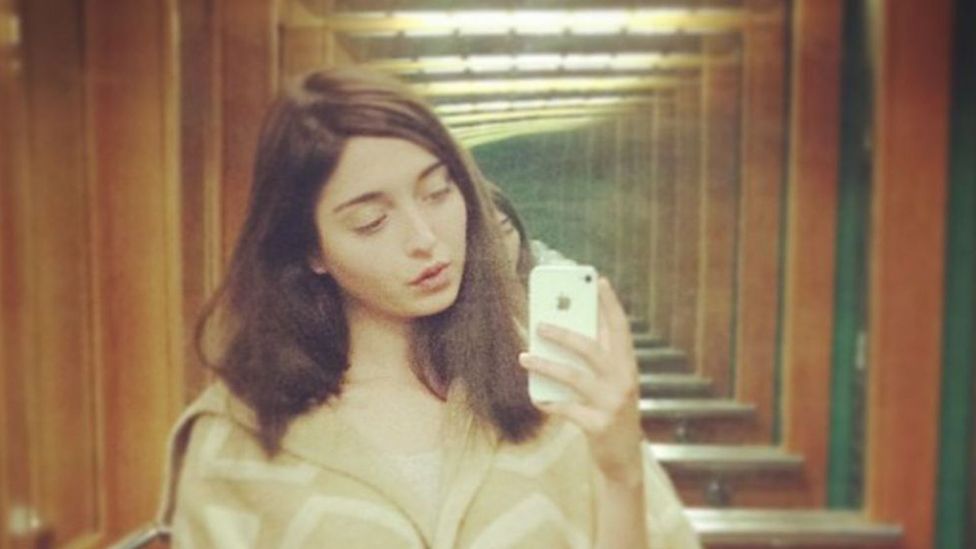 By Cadence Kinsey 7th March 2016
Artist Amalia Ulman created an online persona and recorded it on Instagram to ask questions about gender online. Cadence Kinsey asks what her project tells us about our own social media identities.
B

Between April and September 2014, the Argentine-born artist Amalia Ulman presented herself online as an ‘Instagram Girl’. Using popular hashtags from micro-celebrities on the popular social network, Ulman created a three-part performance work that explored how women present themselves online. Entitled Excellences & Perfections, the project saw Ulman take on the roles of ‘cute girl’, ‘sugar baby’ and ‘life goddess’. These characters were chosen, Ulman says, because “they seemed to be the most popular trends online (for women)”.

Arranging them into “an order that could make sense as a narrative”, Instagram Amalia moved to the big city, broke up with her long-term boyfriend, did drugs, had plastic surgery, self-destructed, apologised, recovered and found a new boyfriend. By the final post of the project on 19 September 2014, Ulman had amassed 88,906 followers (the account now has more than 110,000). It was only then she revealed the whole thing had been a performance, a work of art, rather than a record of real life.

Presented concurrently at two major exhibitions in London – Electronic Superhighway at Whitechapel Gallery and Performing for the Camera at Tate Modern – Excellences & Perfections has received widespread attention for its manipulation of social media platforms and its replication of gendered stereotypes. The Telegraph asked “Is this the first Instagram masterpiece?”, while Slate described the piece as “an art-world sensation”. At the heart of the work is the relationship between online and offline identity. As Ulman told the art critic Alastair Sooke, when she first began posting, “People started hating me. Some gallery I was showing with freaked out and was like, ‘You have to stop doing this, because people don’t take you seriously anymore.’” 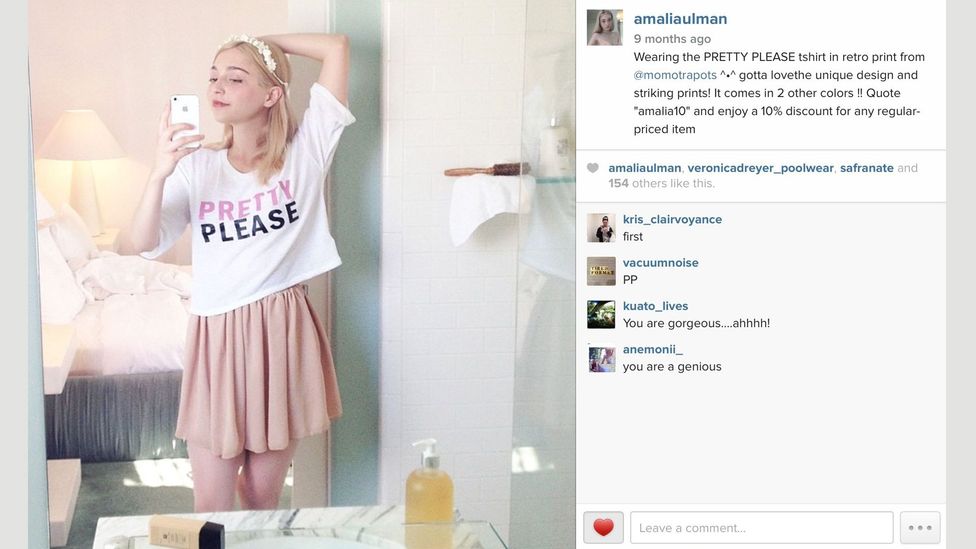 Frequently described as a ‘hoax’, Ulman’s project attracted criticism from users of Facebook and Instagram. The revelation was a surprise to many users because Ulman had ensured that the posts would fit with her usual social media output, at least initially. Ulman “went for the artsy-tumblr-girl aesthetic first”, she tells me, “because it was closer to home and wouldn’t look like too suspicious of a transformation”. Even the ‘sugar baby’ persona was rooted in real life: Ulman has revealed that she worked as an escort when studying fine art in London. For the artist, accusations of playing a trick on her followers illustrate what she has called a “glitch” in social media: the gap between how we live our lives and present them online.

Authenticity is a central idea in the culture of social media, with phrases such as ‘be yourself’ and ‘do what you love’ familiar to most users. These ideals are reinforced by technology, as social media platforms now generally require – or at least encourage – the use of real names and a single identity across profiles. This contrasts with the early web, which offered greater opportunities for anonymity. As the anthropologist Daniel Miller noted in a review from 2013 commissioned by the UK government, “The Internet initially appeared to expand the field of anonymity, which meant people could explore new forms of identity, shift identity, or secure multi-identities with relative freedom. By contrast, Facebook has been associated with not just the loss of anonymity but as a threat to all aspects of privacy.” Yet despite the extent to which authenticity is promoted on social media, we still know that profiles are manipulated or massaged to one degree or another. In other words, they are always performative. Under this lens, Ulman navigates the same balance of performing authenticity as everyone else.

The sadder the girl, the happier the troll – Amalia Ulman

This raises questions about what we expect art to look like and what we expect art to do. Excellences & Perfections has angered some for the way that it reproduces stereotyped images of women. As a work of feminist art, it is markedly different from those of the cyberfeminists of the 1990s who used the web to explore ambiguous identities. Instead, taking inspiration from the very public meltdown of female celebrities such as Amanda Bynes, Excellences & Perfections replicates a narrative of breakdown, apology and rescue that fuels an economy of likes and shares. As Ulman has stated, “the sadder the girl, the happier the troll”. 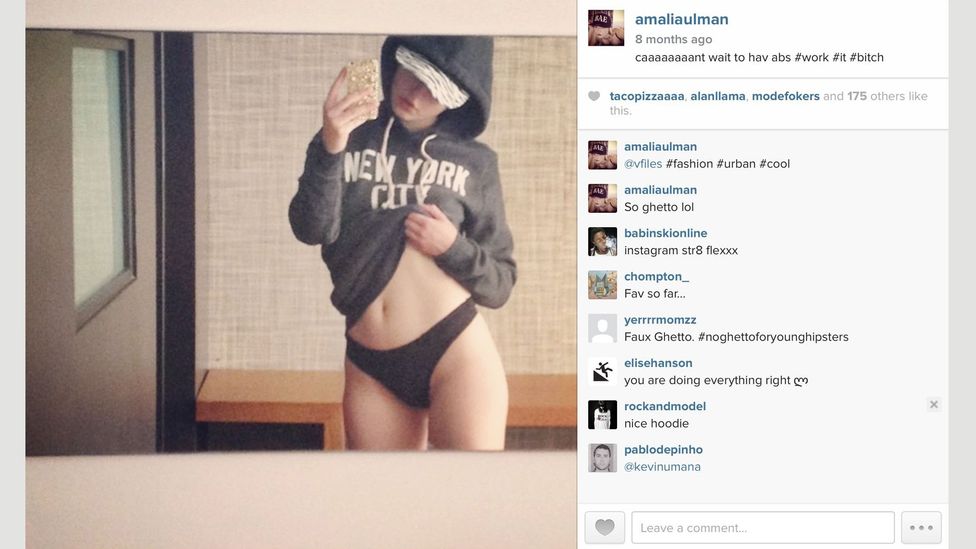 Excellences & Perfections sets the idea of gender as a performance in the specific context of how we reward and value images of women online. By playing to type, Ulman’s Instagram character became popular online. But it was also what lent the project a degree of credibility. It felt believable because it was familiar. Relying on a character and a narrative that had been seen before allowed “people to map the content with ease”. The more someone performs according to prescribed behaviours, the more ‘likes’ and ‘shares’ they will receive.

Rewarding behaviour in this way is fundamental to the business model of social media. Today’s web funnels our opportunities for self-representation through increasingly standardised templates (just think of the options for customisation on a site like MySpace compared to Facebook), and frequently converts aspects of our identity into a single category on a drop-down menu. Sites such as Facebook and Instagram rely on selling information about their users and drop-downs are important mechanisms for improving data capture. As José van Dijck, a professor of comparative media studies at the University of Amsterdam, argued in an article from 2013, “standardising data input guarantees better results”. Far from being a place to escape traditional narratives, behaviours and forms of expression, the web frequently reproduces them. This is an important reminder that the web is not a ‘virtual’ realm, separate from the everyday world. 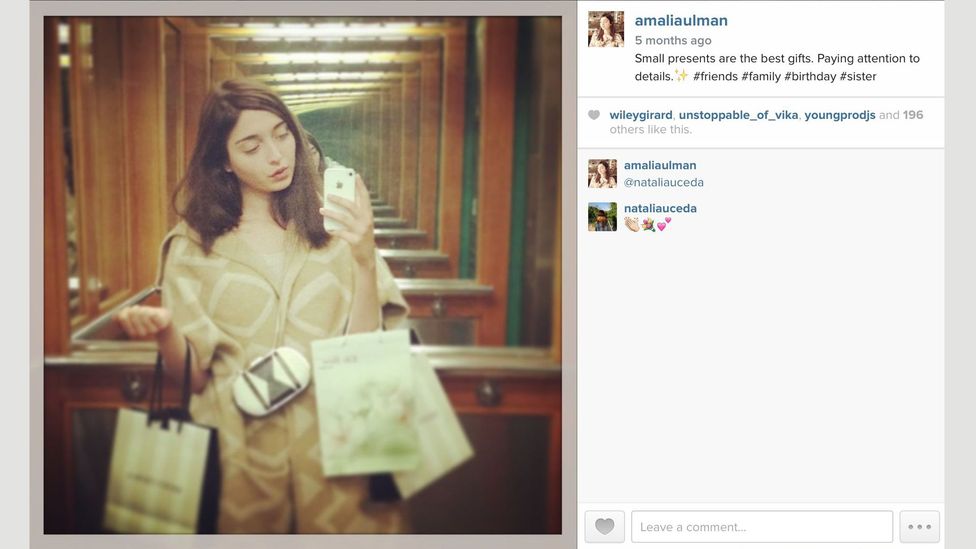 Although this is not the first time that Ulman has explored the way in which certain images gain popularity online (her 2012 essay ‘f/f’ looked at the South American social networking sites Fotocumbia and Fotolog), Excellences & Perfections also presents a sharp reflection of her own role as the artist ingénue. Launching the project as part of the New Museum New York’s First Look program in October 2014, Ulman asked: “How is a female artist supposed to look like? How is she supposed to behave? The price of artworks grow in relation to your looks.” Given the global interest in this work, Excellences & Perfections shows what little difference may lie between how power, privilege and prestige are constructed on the online networks of social media and those of the art world.

Cadence Kinsey is a British Academy Postdoctoral Fellow at University College London, where she is working on a book project about Art After the Internet.