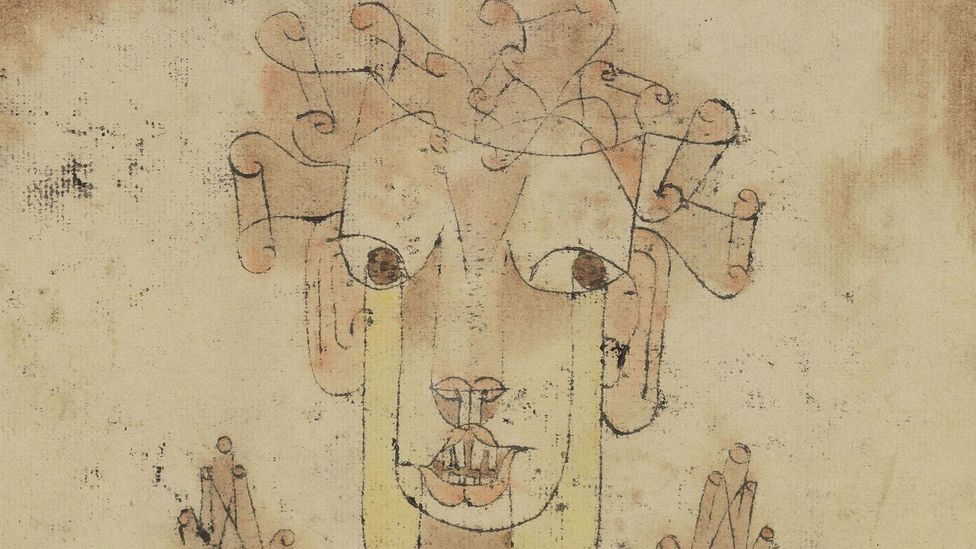 By Jason Farago 6th April 2016
Paul Klee’s famous angel appears tossed by the rough winds of history – and the drawing itself has been blown about the world by tragic events. Jason Farago tells the story of an icon.
H

He stands slack-jawed, his four front teeth protruding from his open mouth like uneven stalactites. His head is topped by a mess of curls, which look more like sheets of parchment than strands of hair, and his jug ears stick so far out from his cylindrical face that they’re almost flush with his jiggly eyes. His dainty chicken feet, joined to spindly legs, are complemented by large, grand wings – spread open, but tangled and ungainly. Paul Klee’s Angelus Novus, a 1920 oil transfer drawing with watercolour, is a fearsome but fragile seraph: afloat, aghast, going who knows where. “This,” wrote Walter Benjamin, the philosopher who first owned the monoprint, “is how one pictures the Angel of History.”

This is how one pictures the Angel of History – Walter Benjamin

The exhibition Paul Klee: Irony at Work, which has recently opened at the Pompidou Centre in Paris, features more than 250 paintings and works on paper by the wily, capricious Swiss modernist. It comes just two and a half years after Tate Modern’s Klee blowout of 2013 – and while you can quibble with the Pompidou’s decision to mount another retrospective so soon, the Paris show has one drawing that London didn’t get. Angelus Novus, barely known during Klee’s life, has become the artist’s most famous work largely thanks to its extraordinary provenance, passing through the hands of four important modern philosophers before entering the collection of the Israel Museum in Jerusalem. It’s now in Paris, and its arrival is nothing short of an event. 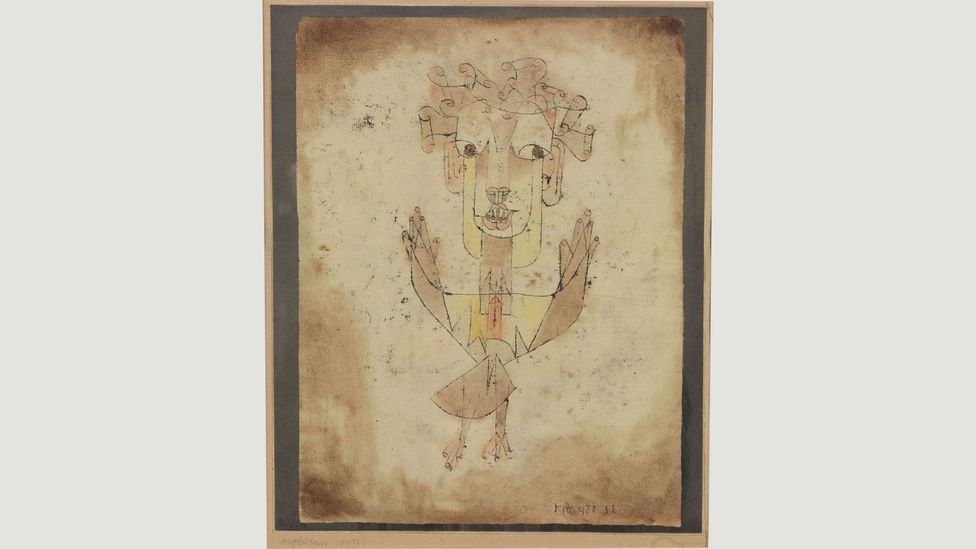 “A storm is blowing from Paradise,” wrote Benjamin. “It has got caught in his wings with such violence the angel can no longer close them.” (Credit: The Israel Museum, Jerusalem)

Like most critics, I shy away from the words ‘mythic’ or ‘legendary’ when describing works of art – in most cases, those words are better left to marketing departments. But Angelus Novus, perhaps more than any other artwork of the last century, really has exceeded the boundaries of the gallery: it is an image more fully understood as a myth than as a work of art. 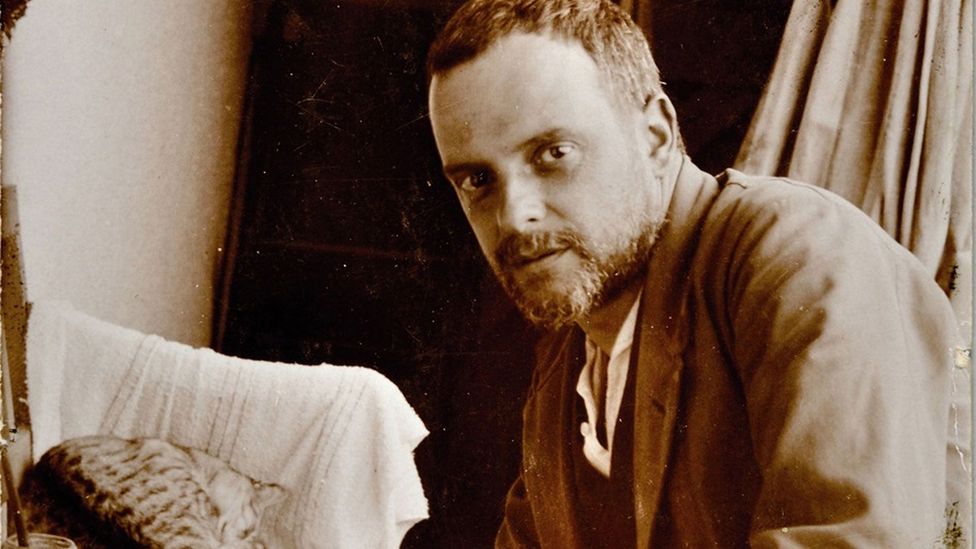 Paul Klee was a young artist at the beginning of his career when the Angelus Novus was exhibited in 1920 – the year in which this picture was taken (Credit: Getty Images)

Klee was still a young artist when he created his winding, eccentric angel in the years after World War One. He was conscripted into the imperial German forces during the conflict, but spent much of his service away from the front, which allowed him to paint and draw throughout WW1. Later, in 1921, he would join the faculty of the Bauhaus in Weimar and then Dessau. But between the end of the war and his acceptance of a teaching job, Klee secured a small income from a Munich art dealer named Hans Goltz – who presented a major show of Klee’s work in 1920.

His wings are grand but inadequate, and he seems trapped between forward and backward motion

That show, which featured more than 100 works of Klee’s, included for the first time the mystical monoprint that would absorb a generation of thinkers. The angel stands suspended like a dummy or a marionette in a mucky yellow field; his wings are grand but inadequate, and he seems trapped between forward and backward motion. That suspension appealed greatly to Walter Benjamin, who was already making a name for himself as a heterodox thinker about politics and art. He bought the artwork in the spring of 1921 for 1,000 marks – a major sum for a writer who had endless money troubles – and hung it in his office in Berlin: a guardian angel, though of a vengeful sort. 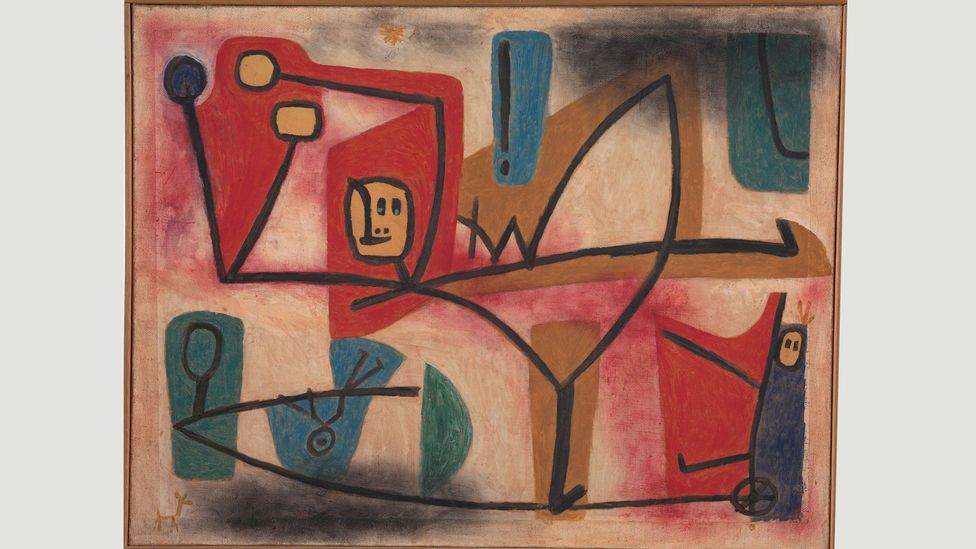 Benjamin was not a systematic thinker, who propounded principles and laws to be tested and affirmed. He wrote discursively, dialectically, feeling his way to new ideas through experiment and contradiction. In this, he and Klee – an unconventional modernist, as comfortable with Bauhaus-approved function as with woozy Surrealism – were one of a kind. Benjamin became something like a Klee superfan, and a healthy proportion of the philosopher’s thinking about art – notably his conception of “aura,” a numinous quality proper to art that is lost in the process of mechanical reproduction – can be traced to his engagement with Klee’s sprightly, dynamic paintings and drawings. None informed his work more than Angelus Novus, a work he frequently called his most treasured possession. 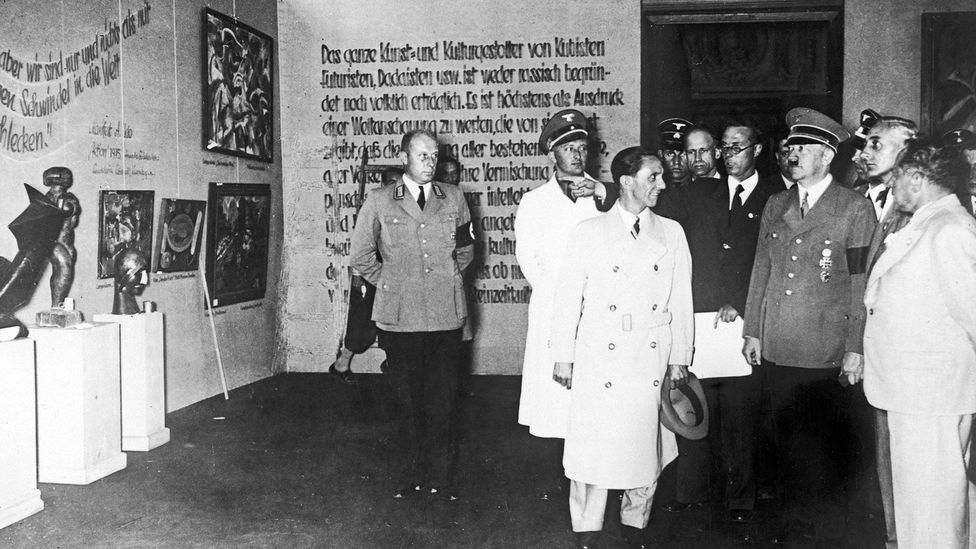 Several of Klee’s works were included in the infamous Degenerate Art exhibition of 1937 – by which time he had fled to Switzerland (Credit: Alamy)

But both artist and philosopher had their careers interrupted by the rise of Nazism: one severely, the other mortally. Klee was booted from his teaching job in 1933 and moved to the Swiss capital, Bern; more than a dozen of his paintings would end up in the Nazis’ notorious Degenerate Art exhibition of 1937. As for Benjamin, he had already left Germany just before Hitler’s accession to power, first for Spain, then for Paris. His beloved Angelus Novus was stuck in Berlin, but a friend brought it to him in 1935: the year of the adoption of the Nuremberg laws, which redefined German citizenship and left the Jewish philosopher a stateless man. When war broke out, Benjamin began writing On the Concept of History, a fragmentary text – a set of notes, really – that tried to make sense of the world’s downward spiral. One image in particular served as his touchstone.

Where we perceive a chain of events, the Angel sees one catastrophe – Walter Benjamin

“A Klee painting named Angelus Novus,” Benjamin wrote in the ninth thesis, “shows an angel looking as though he is about to move away from something he is fixedly contemplating.” (It is in fact not a painting at all: Klee’s oil transfer technique, a method of his own invention, involved slathering a piece of tracing paper with printer’s ink, then placing a drawing paper underneath and scratching the top paper with a needle to make an impression on the one below.) Benjamin went on: “His face is turned toward the past. Where we perceive a chain of events, he sees one catastrophe, which keeps piling wreckage upon wreckage hurling it before his feet.” Then Benjamin takes a turn for the clouds: “A storm is blowing from Paradise; it has got caught in his wings with such violence the angel can no longer close them. This storm irresistibly propels him into the future to which his back is turned, while the pile of debris before him grows skyward.” 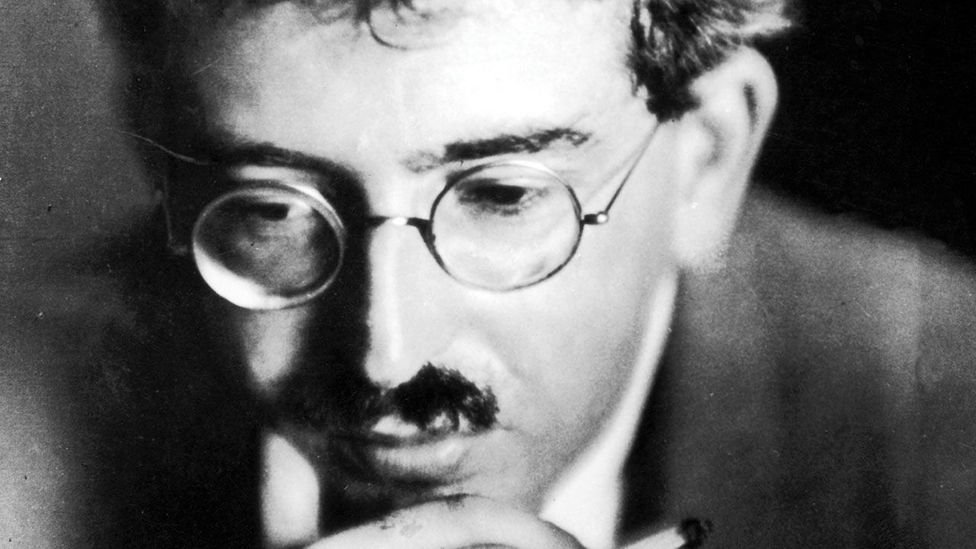 Walter Benjamin’s best-known works include The Work of Art in the Age of Mechanical Reproduction and The Task of the Translator (Credit: Wikipedia)

Angelus Novus would have been unknown to Benjamin’s readers; ever since he bought it from that Munich gallery, Klee’s work had been out of view. But the angel, in Benjamin’s vision, was nothing less than History itself, helplessly turned the wrong way as it gazes at the wreckage of the past. It’s a pessimistic, even fatalistic understanding of the state of the world, one that would have been anathema to leftwing thinkers of just a decade before. But history had caught up with Benjamin since his first encounter with the angel in Munich in 1920.

The angel survives amid catastrophe, powerless but undefeated

The present was debris-strewn already; as for the future, who could imagine? Remember that, before the late 1930s, many Jews and left-wing Germans still held out hope that the Soviet Union could offer a model for a just future once the Third Reich fell. With the Molotov-Ribbentrop Pact of 1939, that last hope was shot. For Benjamin, the kind of historical progress promised by Marxist theory – the certainty that class struggle would necessarily lead to a shining, beautiful future – had been exposed as a sham. Only the angel remained, to survey the rubble of the past, and be borne helplessly into the future.

Less than a year later, in a town on the border between Spain and France, Benjamin swallowed handfuls of morphine pills: a massive, lethal dose. The fall of France spelled disaster for Jewish refugees like him, and Benjamin, who had already been imprisoned in a transit camp, had no hope left for the future. But before he left Paris, he confided his papers and his angel to the author Georges Bataille, who somehow kept them safe in the Bibliothèque Nationale until the liberation. After the war, Benjamin’s possessions were passed onto his fellow Frankfurt School philosopher Theodor Adorno, another great Jewish pessimist; it then came to the Kabbalist scholar Gershom Scholem; and finally Scholem’s widow offered the curly-haired angel to the Israel Museum in 1987. Having been written about and obsessed over for so long, Klee’s traumatised seraph at last emerged to the public – in a country that Benjamin, a complicated Zionist, could only conceive in the ether. 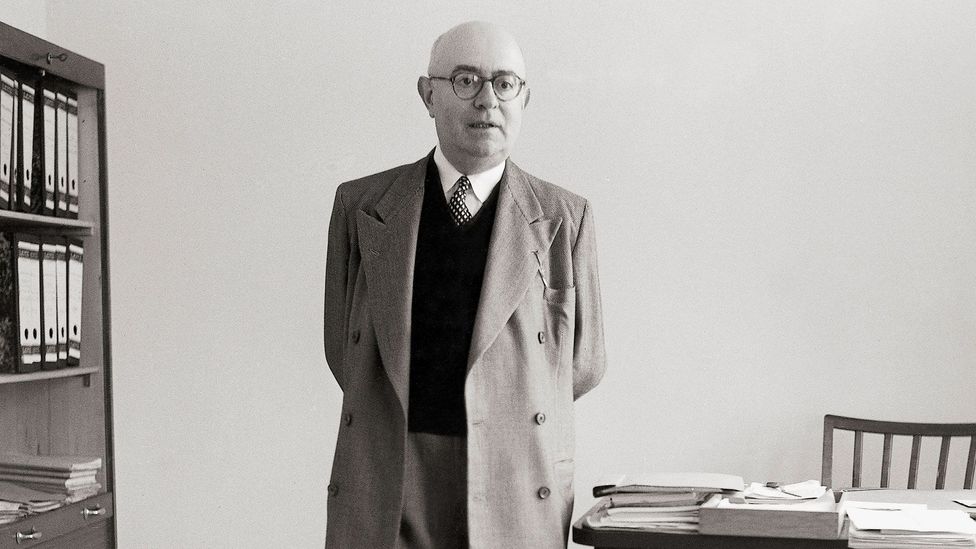 Klee was not Jewish. But Jewish mysticism, and the philosophical and historical traditions associated with the predominantly Jewish Frankfurt School, have become so intertwined with his youthful masterpiece that Israel seems the almost inevitable place for the slack-mouthed angel to call home. He very rarely travels; when the curators of Documenta, the art megashow held every five years in the German city of Kassel, wanted to include the work in their 2007 edition, they had to make do with a photocopy. So the return of Angelus Novus to Paris, the city in which Benjamin conceived his most trenchant and tragic principles of history, offers a very rare chance to see the artwork behind the myth, and still to let the myth propel the artwork forward. The angel survives amid catastrophe, powerless but undefeated, assiduously pushing through an endless and intensifying storm. “This storm,” Benjamin wrote, “is what we call progress.”