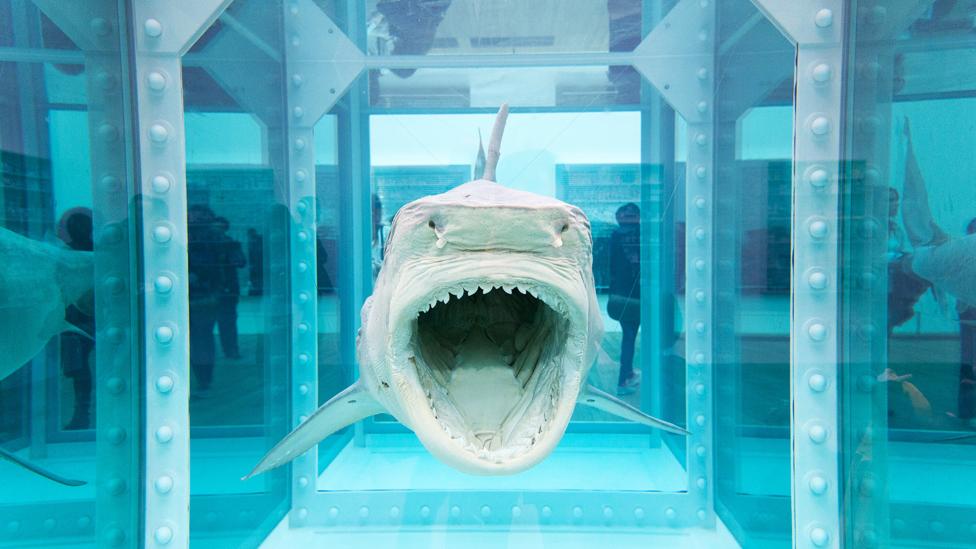 By Elizabeth Fullerton 25th April 2016
B

Before the late 1980s, only a handful of contemporary British artists had made it into the mainstream. That all changed in 1988 when 16 students from London’s Goldsmiths College, led by Damien Hirst, staged their exhibition Freeze – the show that became the nucleus of the BritArt movement.

Freeze is now legendary – but the exhibition’s back story is much messier than its reputation would imply. In this excerpt from her new book Artrage! The Story of the BritArt Revolution published by Thames & Hudson, Elizabeth Fullerton delves into the ego, brilliance, spats and scandals of Freeze.

By the time of the Freeze launch on Sunday 7 August 1988, Mat Collishaw was a wreck. His hands lacerated and bleeding, he had been up for three days straight labouring on his installation for the show. Between bar shifts at a Hoxton nightclub, he had been cutting up sheets of galvanised steel and sawing fluorescent tubes to make 15 light boxes.

Mat and his friends were still mounting what would be arguably the most enduring image of the show when visitors arrived. Titled Bullet Hole, the gigantic photo installation featured a glistening, fleshy vagina-like wound radiating from parted hair – so unbearably magnified that it sent shudders down the spine.

Mat remembers his friend Angus Fairhurst, who was also in Freeze, coming up and telling him he thought the piece looked rubbish. “He was joking, of course, in a very dry way. But I was feeling a little vulnerable because of the lack of sleep and the fact that it was an opening,” Mat says. 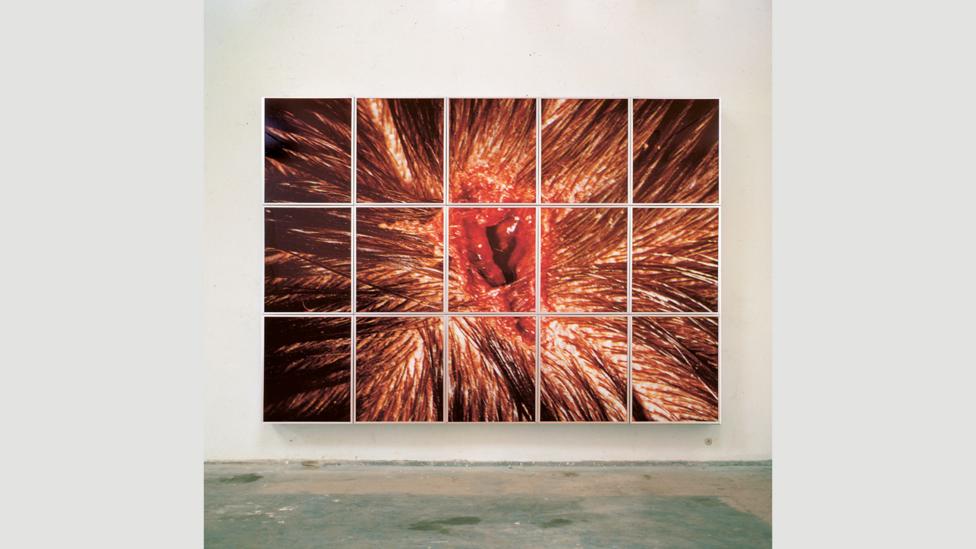 Mat Collishaw’s Bullet Hole, one of the showstoppers of Freeze, was made from Cibachrome mounted on 15 light boxes (Credit: Mat Collishaw)

No doubt the other 15 Goldsmiths College students and alumni in the show shared Mat’s apprehension after three weeks of hard labour overhauling the derelict Port of London Authority warehouse. The stakes were high: the tiny London art scene was virtually a closed shop and this was a rare chance to have work seen.

No one could have foreseen the impact the show would have. It would rewrite the rule book

Freeze has gone down in art world lore, not so much for the art, nor for its setting in an abandoned warehouse, which was not a new concept; it was more the sheer chutzpah of those fledgling artists staging a gallery-standard exhibition, commissioning a remarkably professional catalogue and inviting the art world’s top dogs to the no-man’s-land of Surrey Docks to see it.

No one could have foreseen the impact the show would have. It would blow apart the elitist hierarchy of the fusty art world and rewrite the rule book. In the process it would launch a new generation of British artists who thought big, reached out to mass audiences and weren’t prepared to wait for approval from some higher authority.

“I have no words to tell you from my perspective how important that show was,” says former Serpentine Gallery director Julia Peyton-Jones. “It was a revolution… It really taught me something about vision. Ambition. Desire. And also attitude.”

Having had it drummed into them that they couldn’t expect any breaks in the art world, the students decided to strike out on their own. Several months before Freeze, Angus Fairhurst organised an exhibition of mates including Mat Collishaw, Damien Hirst and Abigail Lane at the Institute of Education in Bloomsbury.

“It was the first nod to, well let’s get out of the walls of this place and do something,” says Abigail.

Damien talked about setting up an exhibition for months but few thought it would materialise: “I just thought, somehow, getting together in a group was going to be much more beneficial… than individually me thinking about myself,” he says.

When he took the reins, he showed himself to be an exceptionally effective organiser. In addition to those mentioned, Damien selected students who were making exciting work, such as the photographer Lala Meredith-Vula, Steven Adamson, recent graduates Stephen Park and Richard Patterson, and Richard’s brother Simon, who was creating conceptual portraits of famous people by silk-screening their names in black type onto a white canvas.

Damien Hirst would jump out of bed, half-naked and hung-over, wheeling and dealing on the phone

The top-floor tower block council flat near Surrey Docks that Angela shared with Sarah Lucas became a nerve centre for planning the show. Damien would jump out of bed, half-naked and hung over, wheeling and dealing on the phone, his innate gift of the gab enhanced by his experience working for a telephone market research firm.

“He was always teasing anybody he was trying to get money off,” Sarah laughs. “Not at all business-like about it but at the same time he would wing it, it would work.” Somehow Damien convinced the property developer Olympia & York to cough up £10,000 (equivalent to £24,000 today) for the catalogue and the London Docklands Development Corporation to provide the disused Port of London Authority building and
£4,000 (£9,700 today) for art materials. 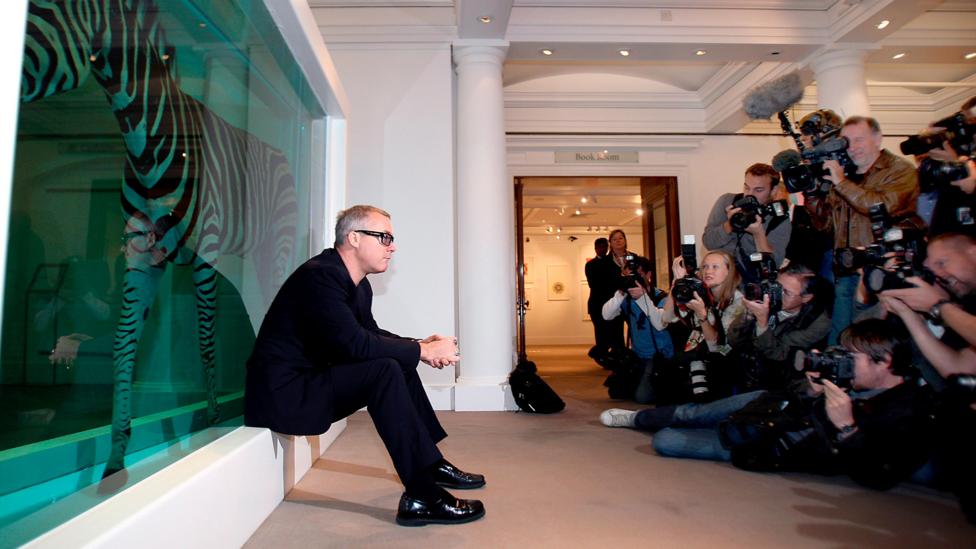 Ian Jeffrey attributed the show’s title to its attempt to capture a freeze frame of a moment. The truth is more prosaic

Jeffrey attributed the show’s title to its attempt to capture a freeze frame of a moment. The truth is more prosaic. Abigail Lane remembers discussing the show with Mat Collishaw, Damien Hirst and Michael Landy while throwing together a lunch of lasagne with lettuce. “It was a frisée lettuce… God knows who said what, but then it must have started a little conversation that led from frisée to ‘Freeze’,” she says.

A natural risk-taker and attention-seeker, Damien would pull crazy stunts like climbing onto the outside of the balcony of Sarah Lucas and Angela Bulloch’s thirteenth-floor flat. Or “he’d be in the lift, way up, get himself into the corner and jump up and down really fast. He would do things like that and terrify everybody,” according to Angela.

Damien sent round a typewritten letter with a detailed work schedule, saying ‘IT IS GONNA BE GOOD!’

But despite the larking around, Damien proved to be highly motivated. He sent round a typewritten letter with a detailed work schedule to make the building ready for the show, urging everyone to pull their weight, saying “IT IS GONNA BE GOOD!”

The well-known photograph taken on the day Freeze opened belies the weeks of spats and toil that went before. Under Damien’s rota system, the students revamped the neglected space, sanding down the floor, tearing out radiators, redoing the electrics, boarding up windows and doors and cleaning out pigeon droppings.

Health and safety barely figured on the radar and there were casualties besides Mat Collishaw’s hands. Anya Gallaccio was rushed to hospital with third-degree burns after splashing molten lead into her boot while pouring her lead floor sculpture. Simon Patterson trod on a large rusty nail, twice.

The gruelling preparation also took an emotional toll on the far from cohesive group. Bitter arguments erupted over the hang as everyone coveted the most advantageous spots.

“It got really nasty,” says Anya. “You sort of saw people’s teeth then.” 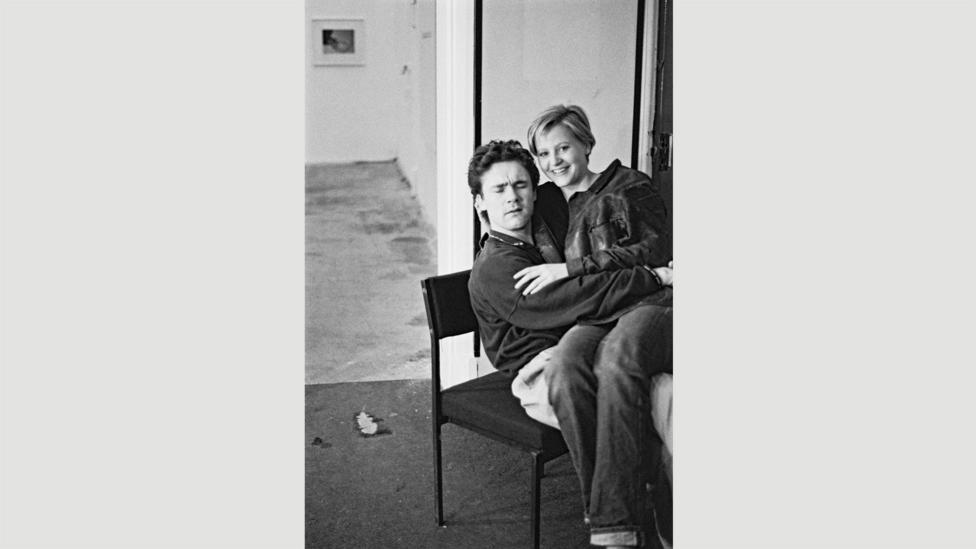 Fault lines were mainly determined by who was sleeping with whom, since half of the 16 participants were couples. Fiona Rae’s boyfriend, Stephen Park, insisted Sarah Lucas’s crushed aluminium forms didn’t make the grade for the show.

“I remember when one particularly grim squabble was going on during the hanging of Freeze, we turned round and Damien was sitting on the floor with his back to the wall and he had a hammer and just banged his head with it until we stopped,” says Fiona.

Damien’s friend Dominic Denis was dumped from the exhibition at the last minute, despite being featured in the catalogue, “which was really brutal, because he did… a lot of work in terms of the labour,” recalls Anya. The consensus was that his painting was too expressionistic and didn’t fit with the “cool, ironic detachment” of the rest, according to Fiona.

Even Damien was not immune from attack, despite organising the show.

He had hung two works from the rafters consisting of cereal boxes painted in household gloss, one in grey-green, the other in bright colours, described by Richard Patterson as “Mondrian via Blue Peter”. But the boxes kept falling down and the green work obscured one of Michael Landy’s attractive wall sculptures of blue tarpaulin pinned with crocodile clips.

“It’s funny because in a way Damien didn’t fit into the show except as curator,” says Simon Patterson.

In the end Simon’s brother Richard climbed up a ladder during the installation and took down the offending work by popular demand. “I didn’t feel too great about taking his sculpture to pieces, but I still actually think the show looked better for it not being in there,” says Richard. Damien was annoyed but too exhausted to protest, according to Simon. 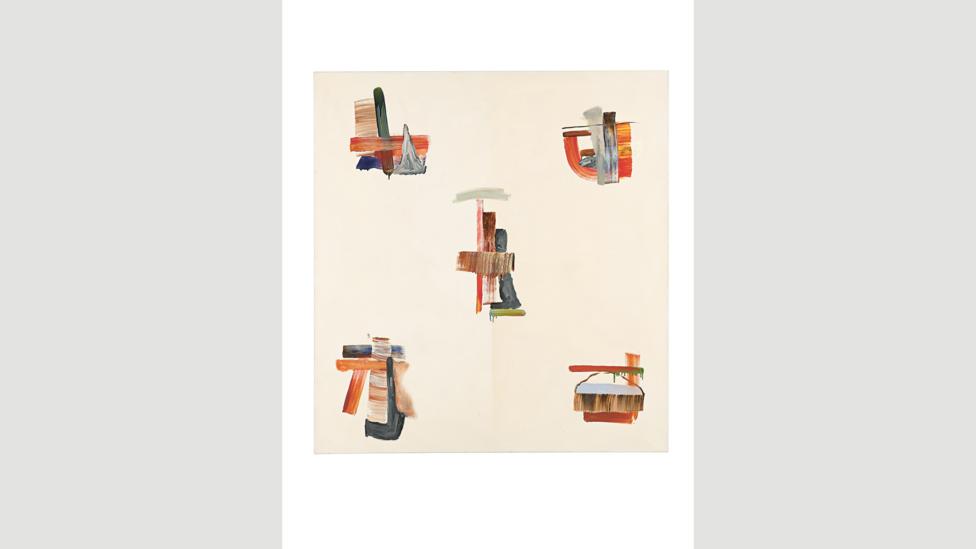 However, the triumph of pulling off the show eclipsed the rows, the injuries and the hard grind. Although rough around the edges, the work bore promise and a raw dynamism. Among the most memorable were Angela Bulloch’s sexy flashing lightbulbs, Simon Patterson’s name portraits, Mat Collishaw’s Bullet Hole, the paintings by Ian Davenport, Gary Hume and Fiona Rae, and Anya Gallaccio’s installation Waterloo, made from a ton of lead, which unpredictably formed a latticework grid upon mixing with the industrial floor glue.

Few of the artists remember much about the opening. Damien had made the mistake of buying all of the alcohol upfront for the two scheduled parts of the show; inevitably the lot was drunk at the opening.

Few of the artists remember much about the opening

“There was a fight and vomiting and usual shenanigans,” says Mat. Michael Landy manned the bar briefly until he collapsed, drunk.

At the second Freeze opening, a tower block went up in flames across the river. “There was a fire in a block of flats that was quite spectacular and it felt like a very, very specially laid-on massive scale destruction just for the evening, black smoke billowing,” says the gallerist Karsten Schubert.

It was a fitting harbinger for the launch of a new art movement that would reflect urban reality in all its glorious grimness.

Extracted from Artrage! The Story of the BritArt Revolution by Elizabeth Fullerton, published by Thames & Hudson.