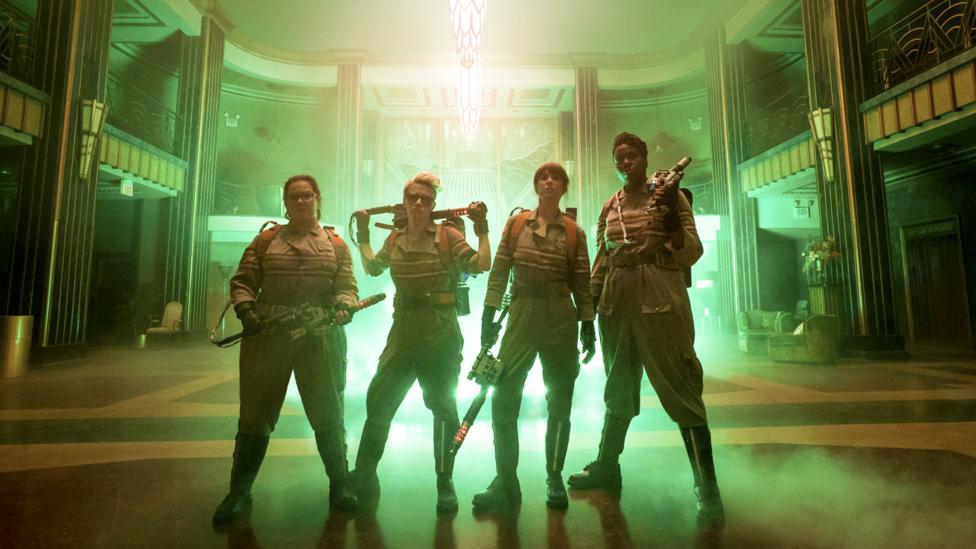 By Nicholas Barber 14th June 2016
Many men, including Donald Trump, have protested against the all-female Ghostbusters. But its casting may be the one thing the new film gets right, writes Nicholas Barber.
A

At the start of Ghostbusters, before we meet its three main characters, we see an office door with their names stencilled neatly on it, alongside four words of red, spray-painted graffiti: “VENKMAN BURN IN HELL!” It’s not the most pleasant fate to wish on anyone, but it’s nothing compared to the abuse that’s been heaped upon the director of the Ghostbusters remake, Paul Feig.

“And now they’re making Ghostbusters with only women! What’s going on?” – Donald Trump

Ever since the remake was announced in 2014, certain people have been complaining that it will somehow tarnish their memories of the film they saw as children. Earlier this year, when the trailer debuted on YouTube, it received more “dislikes” than any other film trailer in the site’s history. The accompanying comments railed against the substandard jokes, the ugly visual effects, and the pointlessness of remaking Ghostbusters at all. But all of the most bilious objections had one theme in common: that the Ghostbusters themselves were now all women.

Instead of Bill Murray, Dan Aykroyd, Harold Ramis and Ernie Hudson, the actors carrying the unlicensed nuclear accelerators were Melissa McCarthy, Kristen Wiig, Kate McKinnon and Leslie Jones, a casting switcheroo which has been too mind-bending for some people to comprehend. “And now they’re making Ghostbusters with only women!” Donald Trump said on YouTube last year. “What’s going on?”

Ernie Hudson, one of the original film’s stars, was more polite about it, but even he opined that “all female, I think, would be a bad idea”. Most of the comments on social media have been a lot less measured. Many of them berate Feig for making a “chick flick” and pushing a “feminist agenda”. Others, the director has said, contain “some of the most vile, misogynistic shit I’ve ever seen in my life”. Quite apart from the sexist unpleasantness of these tirades, they are also fundamentally wrongheaded. The fans who insist that the Ghostbusters should be male have misunderstood the classic comedy they claim to revere. What they should be saying is that having women in the remake is the most authentically Ghostbusters-y aspect of the entire enterprise.

What was so bracing about Ivan Reitman’s film in 1984 was that it didn’t revolve around typical 1980s blockbuster heroes. In its opening minutes, just after we see that graffiti on the door, we see why someone might want Dr Peter Venkman (Murray) to suffer eternal damnation: he is willing to clumsily fix an experiment if it will help him seduce one of his students. “You seem to regard science as some kind of dodge or hustle,” fumes the university’s Dean Yager shortly afterward. And he’s absolutely right. Even when Venkman talks his colleagues, Ray Stantz (Aykroyd) and Egon Spengler (Ramis), into turning their paranormal research into a business, it isn’t so that he can push back the boundaries of human knowledge, or protect innocent civilians from things that go bump in the night. It’s so that he can make some cash. “The franchise rights alone,” he enthuses, “will make us rich beyond our wildest dreams.”

His buddies aren’t cut from standard hero material, either. Stantz is an overgrown kid who insists on buying wildly unsuitable headquarters for the gang, purely because he wants to slide down a fireman’s pole. Spengler, meanwhile, is an awkward and probably autistic egghead who responds to his secretary’s flirting by saying that he collects mould and fungus in his spare time.

It’s fair enough to argue that a character as quintessentially masculine as James Bond should always remain a man, despite the joking suggestions by Gillian Anderson and Emilia Clarke that they be the next 007. But Venkman, Stantz and Spengler are another matter. In a decade when action heroes tended to be as sculpted and macho as Schwarzenegger and Stallone, the Ghostbusters were out-of-shape academics in crumpled, slime-smeared jumpsuits. They wrecked luxury hotel rooms for the fun of it, they couldn’t put together a decent TV advertisement, and in general they went about their ghostbusting with such reckless amateurism that they were as big a danger to New York as any of their supernatural opponents. They were a different breed of hero - and that was what so great about them. The film may be remembered as family-friendly entertainment, but in its anti-establishment grunginess, it was recognisably the work of a group of Saturday Night Live and National Lampoon alumni who weren’t ready to play by the rules of the fantasy genre.

Fast-forward 32 years, and it doesn’t look as if much of that innovation and counter-cultural grubbiness has made it into the new film. From what we have seen of it so far, Feig’s version will be a slavish copy of Reitman’s – right down to the cameos by Slimer and the Stay-Puft Marshmallow Man – except with bright and shiny CGI replacing practical effects, and all-for-one togetherness replacing cynical opportunism. But the one thing it has got right is its casting. After all, the Ghostbusters were always meant to be unconventional underdogs. They were meant to be the last people you would expect to save the world from demonic forces – just as the film as a whole was meant to challenge your preconceptions of what a summer blockbuster could be. And one ingenious way to give both the new film and its protagonists that pioneering freshness is to have women in the lead roles.

What the naysayers don’t seem to realise is that their conservative mindset puts them on the same side as the first film’s villains: the university’s small-minded Dean Yager and the Environmental Protection Agency’s officious Walter Peck. Those were the characters who were enraged by anything that wasn’t done in the proper, approved fashion, whereas Venkman and his pals – like Murray and his pals – did things their own way. It is Feig who is being true to the renegade spirit of Ghostbusters, not his detractors. Whenever he is insulted for his casting choices, he should remember the “VENKMAN BURN IN HELL” graffiti, and console himself that he must be doing something right.

Still, some of the other criticisms may be more justified. Judging by the trailer, Ghostbusters can fairly be accused of being a rehash of the original, of blunting its sharp edges, of being a blatant cash-in, of being dependent on cheesy-looking visual effects, and, worst of all, of being unfunny. But then, all of these charges, and more, could be levelled at Ghostbusters II, the sequel which came out in 1989. Before anyone starts accusing Feig and his cast of messing up Ghostbusters, they should bear in mind that that’s precisely what Aykroyd, Ramis and co did so 27 years ago.