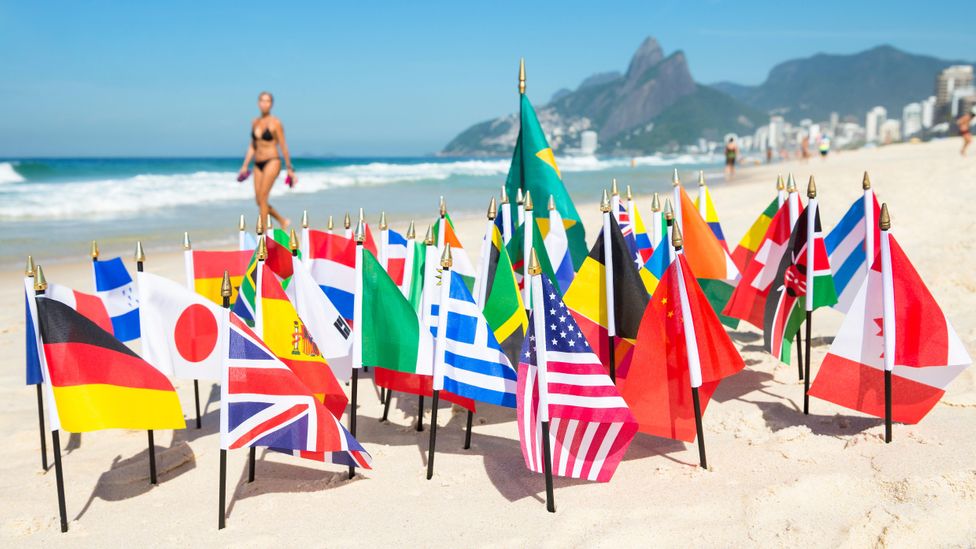 By Alex Marshall 8th August 2016
The Olympic Games aren’t just a showcase for athletes, but for each country’s official song. Alex Marshall selects the ones to listen out for.
T

The next two months, during the Rio 2016 Olympics and Paralympics, should be heaven for music fans. Not because the Games are in Brazil, home of so much great music, from Bossa Nova to Tropicalia, but because it’s a chance to hear the most important songs ever written: national anthems. A whopping 208 of them to be exact. Or 209 if you include the Olympics’ very own, a somewhat wordy song calling on God to “shine in the momentum of noble contests”.

National anthems, despite only being a minute long, have genuinely achieved more than any other type of music you can name. People have fought wars singing them, and chanted them at protests. They’ve helped heal countries following bitter struggles, like South Africa’s after apartheid, although they’ve also been used to stoke ethnic divides.

Some have the most boring music imaginable, but others are like pop songs – unforgettable as soon as you’ve heard them. They have inspired everyone from sportspeople to schoolchildren, everywhere from Luanda to Liverpool.

So, which ones should you be praying get an airing at the Games? I would start with the following 10.

If there’s one anthem likely to cause controversy at the Games, it’s Russia’s. Given the revelations of state-sponsored doping of the country’s athletes, there’s a fair chance the crowd will boo it if any Russian wins gold. But that’d be a huge shame, and not only for the athletes. Russia’s anthem is one of the best there is; a song as powerful as an army marching across the steppe.

Myanmar, Until the End of the World

South Africans often claim to have the only anthem that starts in one tune and ends in another, their anthem being a blend of Nkosi Sikelel’ iAfrika, the great anti-apartheid song, and Die Stem van Suid-Afrika, the country’s anthem during apartheid. But that claim’s not exactly true. Myanmar’s anthem pulls off the same trick and in far stranger fashion. When played in the country, it starts with a traditional Burmese folk tune, until 30 seconds in when it suddenly lurches into a military march. It’s a bit like listening to a DJ who suddenly gets bored and switches records, but it’s all the better for it.

Nepal, We Are Hundreds of Flowers

Nepal’s isn’t your usual anthem. It doesn’t try to sound like a military march or a church hymn. Instead it sounds like a joyous Nepali pop song, the sort of music you hear blaring out of taxis in Kathmandu. It’s the only anthem normally played on a Casio keyboard, and it is so happy it’s somewhat unsettling to learn it was the product of a Maoist revolution.

If there’s one emotion that anthems normally steer clear of, it’s sadness. Most composers seem to think that anthems must sound boisterous and proud if they are to stir patriotism. Israel’s proves that’s wrong. It was written before the country existed and is filled with longing for a Jewish homeland, both in its words and its nostalgic music. It’s so sad, in fact, it seems more appropriate for a funeral than celebrating a gold medal. But if any anthem is going to make an athlete cry on the podium, it’s this, and isn’t that what TV viewers want?

Everybody enjoys it when the wrong anthem’s played by mistake, don’t they? Well, perhaps not Kazakh athletes. Back in 2012, one was played a song from the comedy Borat instead of their anthem. Another time, Kazakh athletes were played Ricky Martin’s Livin’ la Vida Loca at an opening ceremony. So if a Kazakh does wins gold, makes sure you’re listening. It should actually sound like this song.

Brazil’s anthem is a genuine triumph, a mini-opera whose introduction alone spirals ever-upwards, getting quicker and quicker, as if the melody itself is trying to drag people onto their feet. But at this Olympics, you want it played for one reason only: because the crowd will sing. Brazilians don’t sing their anthem reluctantly, like most sports fans. They sing it joyously, belting out every word and carrying on singing long after the music’s stopped. If it’s played, it will be the most exhilarating sound at the Rio Games.

China, March of the Volunteers

China’s perky anthem is played so often at the Olympics, it’s surprising that few people know its unusual past. It was originally written for a 1935 film called Children of Troubled Times – a love story set against the Japanese invasion of Manchuria. But the song itself, especially its call to “build a new Great Wall with our own flesh and blood”, proved so popular it was not only released on vinyl, but it then practically forced its way into becoming the country’s anthem. By 1939, it was so well known that The New York Times felt the need to print its sheet music so readers could give it a go.

If a national anthem is meant to advertise a country, then Mauritania’s does it very badly. It has such an air of menace, it practically screams, “If you come here, you’re not getting out”. It’s far more threatening than Iran’s or North Korea’s anthems – countries you might think would want to scare – but is brilliant for it.

The first real national anthem – the UK’s God Save the King – was originally meant to be sung by a soloist, not by a crowd. There’s only one anthem that keeps up that tradition: the Democratic Republic of Congo’s. Its final section is written to be sung by a lone singer, a choir only chiming in with the words “Congo”, “30 June” and “sacred day” in reference to when the country got independence. Unfortunately, it’s rarely done properly, but you get the feeling of its beauty even in the instrumental.

Paraguay’s anthem isn’t the best by a long shot, but it has by far the best name – a title that sums up everything that’s meant to be at the heart of these songs and of nationalism itself. And it would be very amusing to hear a stadium announcer at the Olympics ask the crowd to, “Stand for Republic or Death.” Although given Paraguay has only ever won one medal – a silver in men’s football – the chances of that happening in Brazil are slim. Come on Paraguayans, make this your year!

Alex Marshall is the author of Republic or Death! Travels in Search of National Anthems, out now on Windmill Books. He blogs about these songs at republicordeath.com