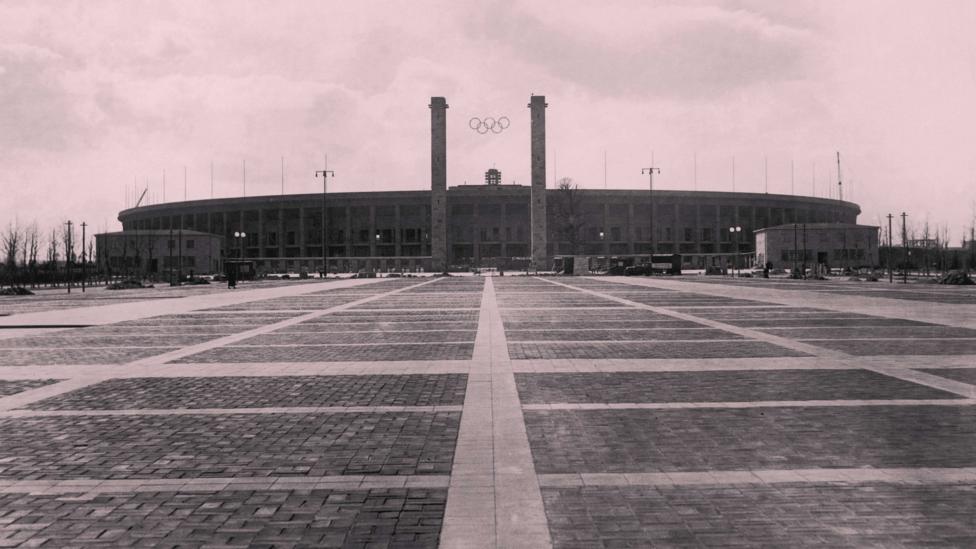 In Stephen Hopkin’s recent Jesse Owens biopic, Race, Owens (Stephan James) is about to compete in the 200m sprint in the 1936 Berlin Olympics, and Leni Riefenstahl (Carice van Houten) is about to film him, when Hitler’s propaganda minister, Joseph Goebbels, insists that the cameras are switched off. He doesn’t want the world to see Germany’s fittest young Übermenschen being left in the dust by an African-American. But Riefenstahl doesn’t listen. She is determined that her Olympic documentary will be a work of timeless truth and beauty, whether Hitler approves or not.

Is that really what happened? It’s true that Riefenstahl’s two-part documentary, Olympia, includes Owens’ victories over his Aryan competitors, and it’s true that it was acclaimed as a masterpiece that revolutionised the way sport was depicted on screen: in 1955, a mere decade after World War Two ended, a group of Hollywood directors chose it as one of the 10 best films ever made. But cinema historians still debate whether Riefenstahl was defying Goebbels and Hitler, 80 years ago this summer, or whether she was doing exactly what they wanted. 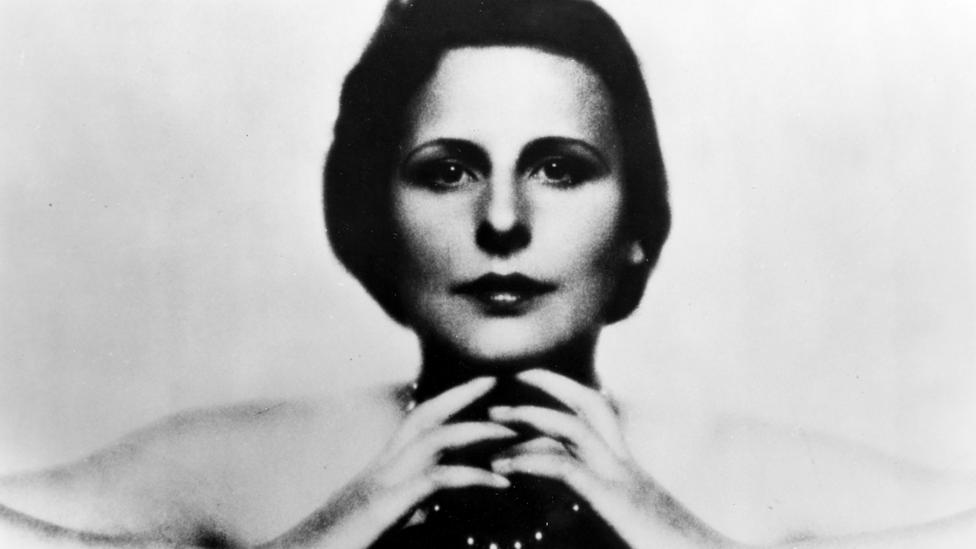 Leni Riefenstahl trained as a dancer and was an actor in several hit films of the 1920s and ‘30s before she became a director (Credit: Alamy)

There’s a lot less ambiguity about Riefenstahl’s previous film. Helene Bertha Amalie Riefenstahl’s most famous accomplishment is Triumph of the Will, a horribly gripping account of the Nazi Party’s 1934 Nuremberg rallies. The film is so dynamic, so compelling, so grand and ambitious, that it ranked at number 19 in a 2014 Sight & Sound magazine poll of cinema’s best documentaries. It is also, on the other hand, a monumental piece of Nazi propaganda. Opening with a caption trumpeting “German rebirth”, Triumph of the Will goes onto imply that Hitler is nothing less than the godlike saviour of Germany. Not that Riefenstahl ever admitted that this was what she intended. “Everything in it is true,” she later protested. “And it contains no tendentious commentary at all. It is history. A pure historical film.

The Führer was so delighted by this “pure historical film” that he gave Riefenstahl an even bigger, more expensive commission. Olympia Part One: Festival of the Nations and Olympia Part Two: Festival of Beauty wouldn’t just chronicle Berlin’s Olympics, they would be a meditation on everything the Games stood for, and everything Germany could achieve. “Olympia broke the mould of Olympic films in many ways,” writes David Goldblatt in his new book about the Olympics, The Games. “First, Riefenstahl had a degree of active support from the organizers... that no other film-maker had acquired. She had total access and total control, and an immeasurably large crew and budget. Second, in terms of technological and cinematic sophistication, there was no comparison.”

There are no delays and no disappointments, and no moments which aren’t entertaining

Part One begins with a mystical glide through the smoke-wreathed ruins and statues of ancient Greece. The statues then metamorphose into naked athletes and dancers – one of whom is Riefenstahl herself – and the film floats through time and space until it reaches the lighting of the Olympic cauldron in Berlin – the torch relay was invented for the 1936 Games. After the colossal opening ceremony, Olympia speeds through the events in and out of the stadium, flitting from highlight to spectacular highlight. The momentum never flags. The enthusiastic commentary and Herbert Windt’s stirring music never stop. In the sunlit idyll which Riefensthal creates for the viewer, the most logistically complicated pageants – whether they are political rallies or sporting jamborees – move like clockwork, with no delays and no disappointments, and no moments which aren’t entertaining. Alfred Hitchcock once said, “What is drama but life with the dull bits cut out?” And on those terms, Riefensthal can stand alongside any dramatist ever to work in cinema. 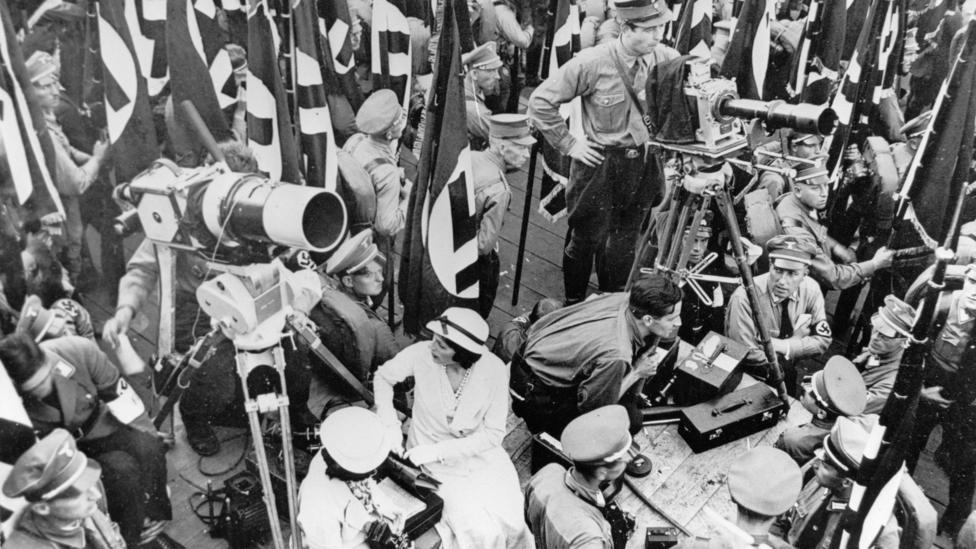 Riefenstahl had impressed Hitler with Triumph of the Will, a documentary of the 1934 Nazi Party Congress in Nuremberg (Credit: Alamy)

The film’s one glaring flaw is that she isn’t very interested in the Games’ competitive element. She doesn’t build much tension over who is going to win any of the events. Her only concern is to make them all uniquely cinematic, via slow-motion sequences, tracking shots, an astonishing number of different camera angles, and some extreme close-ups which were filmed afterwards and then spliced into the competition footage. This radical aesthetic approach culminates in a mesmeric high-diving montage shot by Hans Ertl. What begins as a straightforward record of the competitors’ dives becomes more abstract and ecstatic until it is more like an aerial ballet, or a firework display. Riefenstahl even runs one segment backwards, so that a diver soars out of the water and into the air.

Knowing what we do about Nazi Germany, the film’s obsession with race is troubling

Whenever you start to be hypnotised by Olympia, though, you are jolted back to reality by a shot of Hitler, up in the stands, clapping and cheering when the Germans are doing well, drumming his fingers on his uniformed knee when they aren’t. These candid interludes, say Riefenstahl’s detractors, were a concerted ploy to humanise a brutal dictator. But it’s an accusation that’s impossible to prove. To the untrained eye, it just looks as if Hitler is being Hitler.

Besides, in Riefenstahl’s defence, her representation of Owens is entirely positive. Repeatedly described by the commentator as “the fastest man in the world”, Owens is shown not just winning four gold medals, but beaming at the camera afterwards. No other athlete in the film makes anywhere near as much of an impression. Nor is Owens the only black competitor to feature in Olympia. Knowing what we do about Nazi Germany, the film’s obsession with race is troubling: the commentator notes that the line-up in the 800-metre final has “two black runners against the strongest of the white race”. But this fixation has its subversive aspect. The “black runners” – John Woodruff and Phil Edwards – finish the 800-metres in first and third place. It’s hard to see how this sequence could have served the Nazi cause.

As much as Olympia glorifies Germany, it can just as easily be read as a celebration of multi-racial America. Again and again, Riefenstahl focuses on a US victory. And on two separate occasions, she superimposes a fluttering Stars and Stripes on a shot of a handsome, smiling, American medal-winner. She may have wanted to impress Hitler, but she also had her eye on a career in Hollywood. 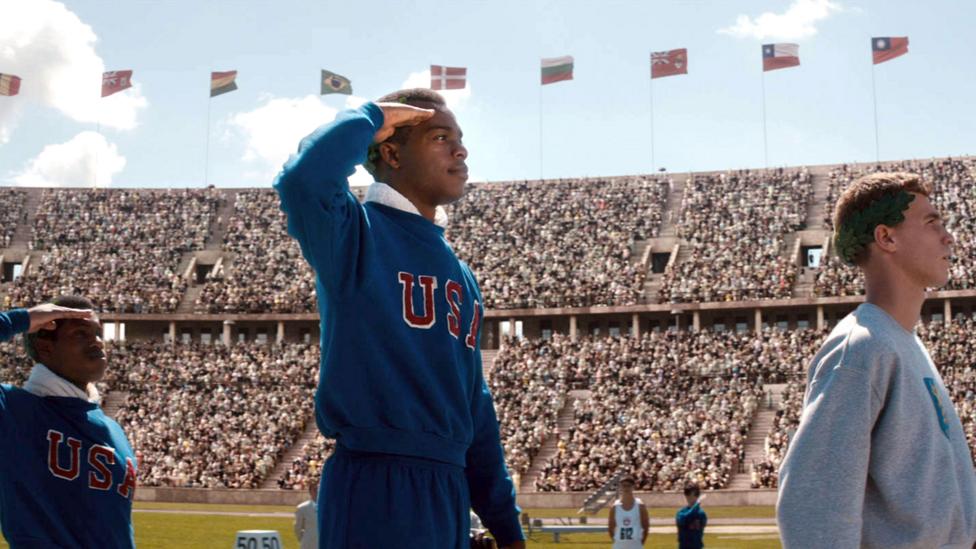 She didn’t get one. Just after Riefenstahl arrived in New York in November 1938 to promote Olympia, news of the Kristallnacht pogroms reached the US: more than 1,000 synagogues throughout the Reich had been burnt in one night, thousands of Jewish businesses had been vandalised, and 30,000 Jews had been taken to concentration camps. After Riefenstahl declared to the American press that she didn’t believe these reports, no studio boss in Hollywood would see her – the exception being Walt Disney. She returned to Germany, where she started work on an epic drama, Lowlands, using Gypsy extras who, it was claimed in a 2002 lawsuit, were sent to Auschwitz once filming was finished. (The case was dropped when Riefenstahl retracted a public statement claiming all the extras had survived the War.) 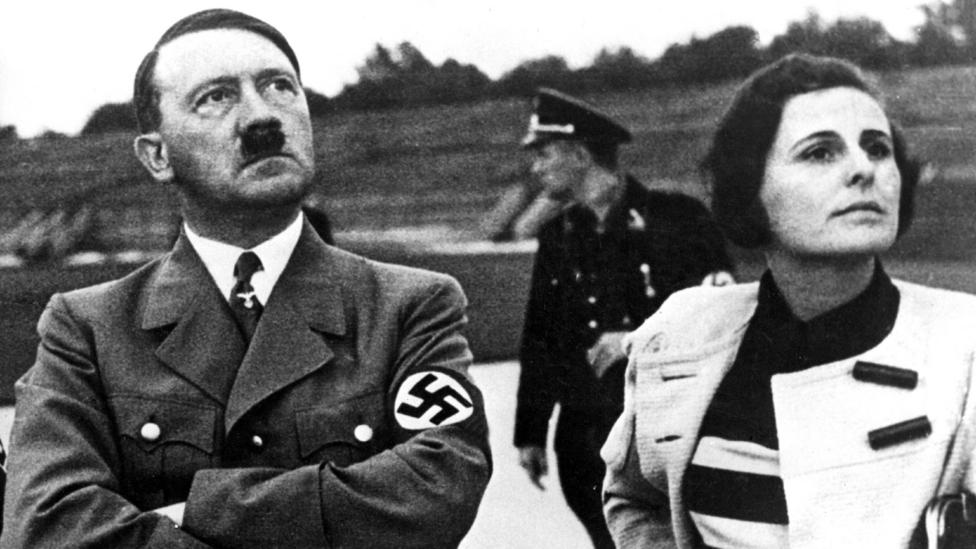 Riefenstahl’s close ties to the National Socialists – and Hitler in particular – haunted her for the rest of the life, but she remained adamant she was no Nazi (Credit: Alamy)

Riefenstahl’s long life after 1945 was a strange one. She wasn’t convicted of being a Nazi, and she regularly sued anyone who said otherwise, but she couldn’t wash off the stink of Hitler. Lauded as one of the greatest directors ever to pick up a megaphone, she only released one more film, Underwater Impressions, in 2002.. She died a year later, aged 101.

Riefenstahl’s biographers have since come to agree that she had a closer relationship with Goebbels and Hitler than she liked to claim. But it would be wrong to decry Olympia as a fundamentally Nazi film. It isn’t. In fact, its most Nazi-like attributes are those which are intrinsic to the Olympics: the fetishising of physical perfection, the evocation of a mythical ancient past, the division of the world into separate, competing, flag-waving countries. The uncomfortable truth is that Olympic imagery is never very far away from Nazi imagery, whether Riefenstahl is involved or not.