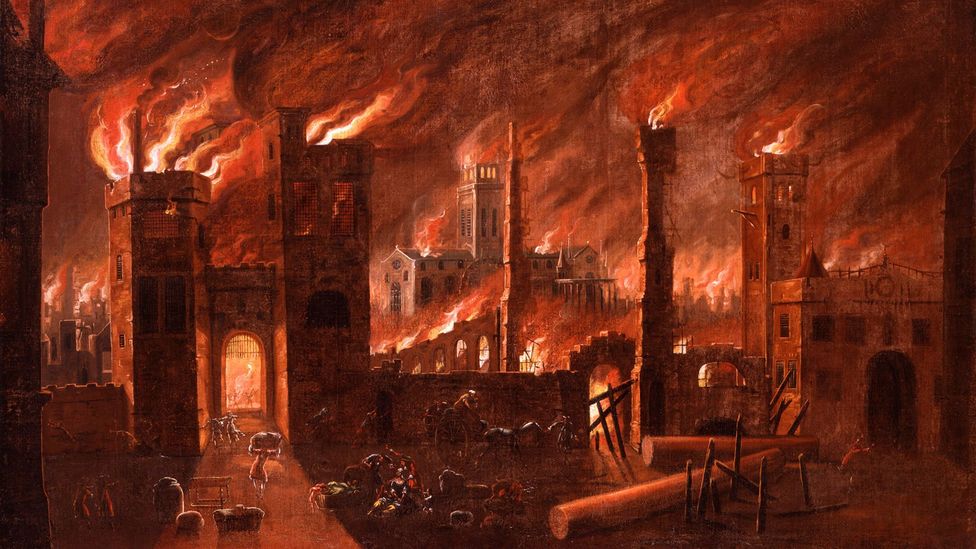 On Saturday 1 September 1666 the City of London sat nestled within its Roman walls away from the rest of the surrounding districts. It was a thriving, bustling world of narrow cobbled streets filled with timber-framed, thatched buildings. Its wharfs and docks on the River Thames flowed with people, goods and talk of wars with the Dutch and the French.

This was the world of Samuel Pepys, Clerk of the Acts to the Navy Board and diarist. He had grown up in the city and, with a talent for administration and hard work, was a rising star in the English Admiralty of King Charles II. The diary he kept for nearly ten years from 1660 eventually became one of Britain's most celebrated and a unique records of everyday life for an upper middle-class person in Stuart England. Historians have long admired Pepys' diary because it features many minor day-to-day happenings that other contemporary documents do not cover.

London had flirted with disaster before, having seen a recent fire in 1632 and the Great Plague arrive in 1665, but swiftly off the back of one awful time, came another – the Great Fire.

Shortly after midnight on 2 September 1666, a small fire began in the premises of Thomas Farriner, baker to the King. Within the hour it had quickly spread to the rest of the building, while Farriner and his daughter escaped from an upstairs window. Sadly his maidservant, who was too frightened to try the same escape route, perished and became the first casualty of the fire.

Before long, the inferno had spread to neighbouring properties. A plan to pull down surrounding buildings to create a fire break was turned down by the Lord Mayor, Sir Thomas Bloodworth, on account that the building’s owners could not be found. As the night drew on, the fire fed on further properties and crept towards flammable paper stores by the river. A few days later, when the fire had all but been extinguished, it had consumed 13,200 houses and 87 churches, leaving an estimated 70,000 people homeless and resulting in six verified deaths.

Take a journey through our interactive map, which tells the story of the Great Fire through the detailed diary entries of Samuel Pepys, to see where he went, what he saw and who he met between 1 September and 5 September 1666. The map also illustrates the extent of the fire on each day (red areas) and shows the approximate edge of London during that period (grey areas), to provide a sense of scale of what was, at one point, a raging firestorm.

What happened during these few days in 1666 has since gone down in history as an event that led to the re-design of the city, gave rise to the first modern insurance company, and helped propel Samuel Pepys’ diary to fame.

The text we have used for Pepys’ diary has been taken from a 1893 edition, edited by Henry B Wheatley. This version, and others since, has been translated from Samuel Pepys’ original shorthand version.